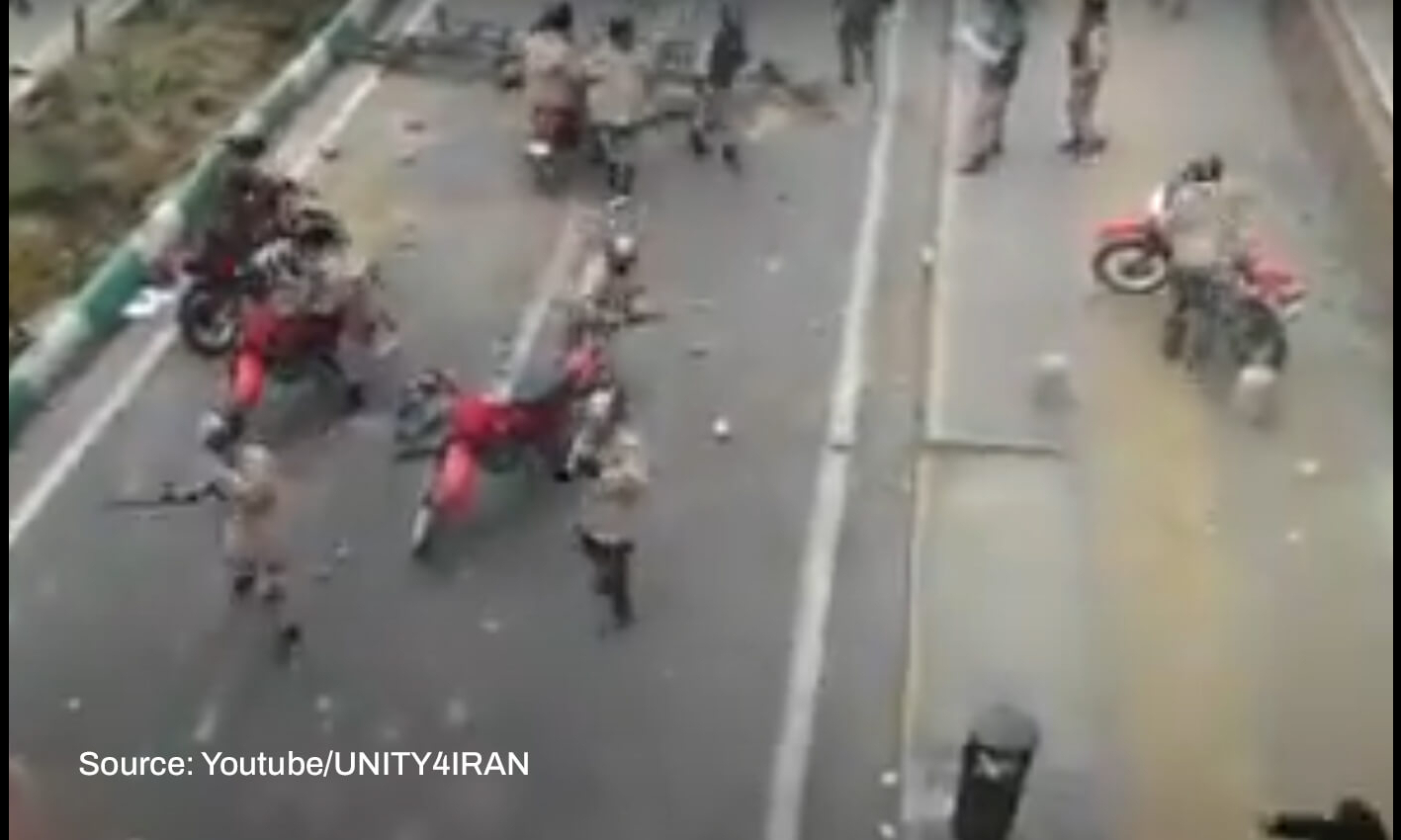 On October 5, a blurry, low-quality clip was posted to Facebook that showed Iranian security forces on red motorcycles fighting with a swarm of people in a city street. The caption inferred that the footage was taken during protests over the death of Mahsa Amini, a 22-year-old Kurdish-Iranian woman who died in custody on September 16, 2022. It said, "When dictatorship is a fact, revolution becomes a right, and those who make peaceful revolution impossible, make violent revolution inevitable! WE ARE THE MAJORITY GO LIONS GO." Objects can be seen thrown at law enforcement before hordes of people fill the street, some running while others appear to be fighting. A fire can be seen as smoke erupts in the background. However, this video is not from 2022.

The video has been circulating on social media since 2010. A reverse image search led us to a video uploaded on YouTube on November 7, 2010, with the caption "Iran Tehran 7 Dec 2009 Riot Police Captured by Protesters." In the video, the grassy road divider in the center of the street is lined with green and white curbs, which matches the streets of Tehran, where many thoroughfares are bordered with green and white dividers, according to Google street view images of the city. There is a yellow bus in the footage's background, similar to the viral post.

We found a video of the clash from another angle, filmed on the ground, posted on YouTube on January 4, 2010, indicating that the footage was captured in December 2009. The same bus, dividers, and buildings can be seen from this angle. A red motorcycle can also be seen overturned on the pavement.

According to AP News on January 13, 2018, throughout 2009, massive crowds marched in the streets of Tehran demanding change in major unrest that drew millions after the reformist opposition raised accusations that the reelection victory of Former President Mahmoud Ahmadinejad was rigged. It was termed the Green Movement.

We searched for the keywords mentioned in the caption and found an article published by CBS News on December 7, 2009, with the headline "Iran Cops Clash with Opposition Protesters." The report noted that security forces and militiamen clashed with thousands of protesters shouting "death to the dictator" outside Tehran University. Riot police, Revolutionary Guard forces and pro-government volunteer militiamen known as the Basij flooded the area around Tehran University, beating men and women with clubs as crowds of demonstrators hurled bricks and stones.

Also, in the viral clip, several protesters are wearing the movement's signature color, green. At the same time, it's unclear which specific December 2009 demonstration this footage shows.

The video in question shows an unrelated conflict between protesters and security forces in Iran's capital during the Green Movement protests over ten years ago. It has nothing to do with the recent protests over Mahsa Amini's death. Hence, we have marked this claim as false.