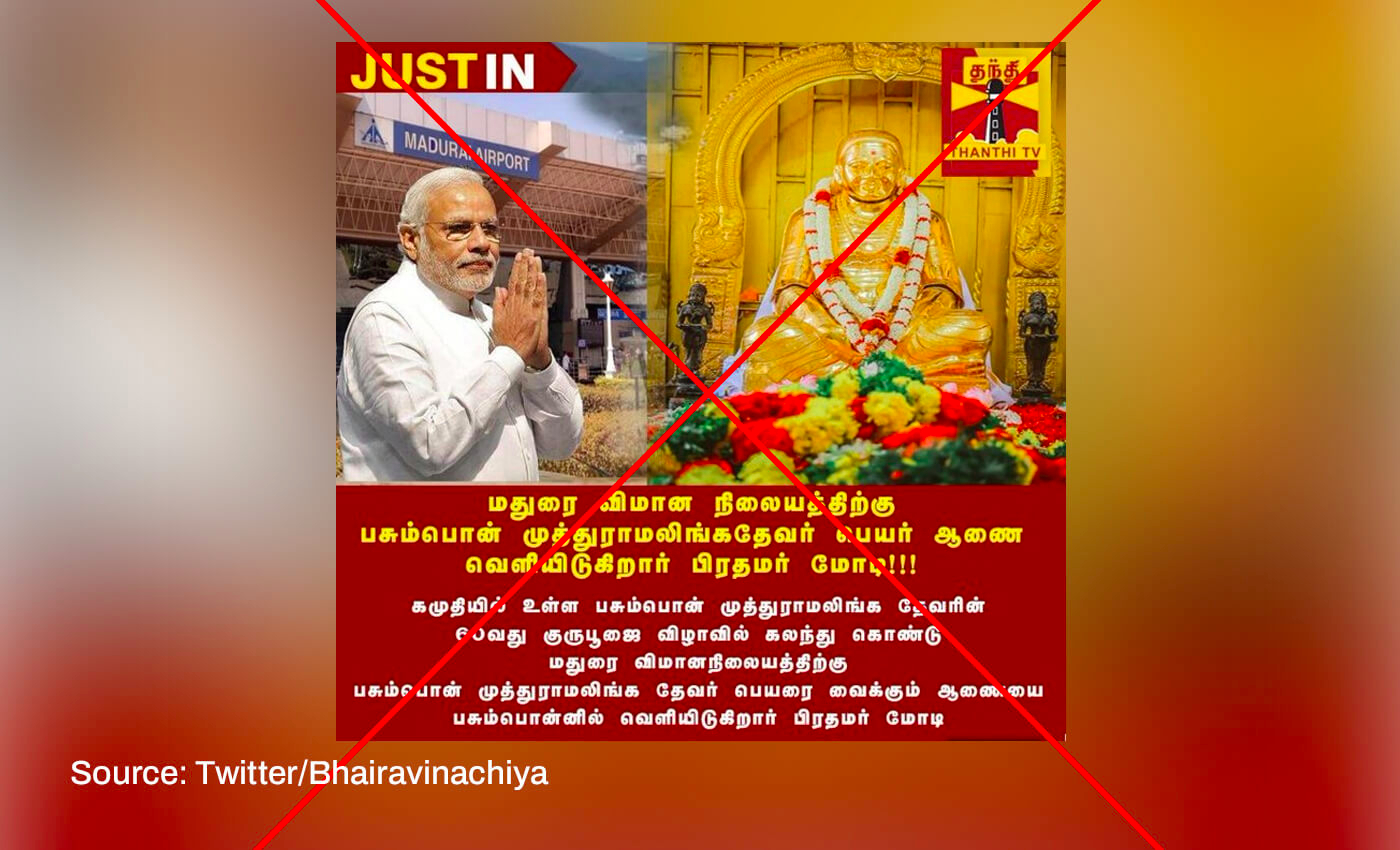 Modi issued no such order, and the celebration, or Guru puja, in Thevar's honor is scheduled for October 30.

A post, supposedly by Tamil news channel Thanthi TV, with its logo on the top right, is going viral on social media. The post carries three photos of Prime Minister Narendra Modi, Madurai airport in Tamil Nadu, and a golden statue of freedom fighter Pasumpon Muthuramalinga Thevar. The text below the photos states that after attending the 60th Gurupuja in honor of the freedom fighter, Modi issued an order to rename Madurai airport after him. The post claims that Modi attended the freedom fighter's birth anniversary celebrations in Kamudi, a town in Tamil Nadu's Ramanathapuram district.

However, we found this is a fabricated post, not a news report by Thanthi TV. We went through the Twitter handle of the news channel and found that while their graphics for flashing news items is very similar, the post in question has one difference. The viral post has a line saying "JUST IN," similar to the actual posts by Thanthi TV. However, the news channel logo, while in the correct position on the viral post, appears to be embossed over another logo, which can be seen faintly from below it. Further, we found no such post on the Madurai airport published by Thanthi TV on Twitter. We found a tweet by them calling out the viral post as fake news.

We also checked for news reports about Modi renaming the Madurai airport after Thevar and found no results. Instead, on searching for reports on the 60th Guru puja, which is the celebration of the birth anniversary of the late leader, we found that it is scheduled to take place on October 30. According to a report by The Hindu, the 60th Guru puja and the celebrations of Thevar's 115th birth anniversary will take place in Tamil Nadu's Ramanathapuram district. Therefore, Modi could not have attended the celebrations and made an announcement. The photo of the garlanded statue in the viral post is likely from one of the previous Guru Pujas, held every year on October 30. Ahead of the puja, the three-foot-high statue of the freedom fighter in a seated position is adorned with a decorative gold plating gifted by former Tamil Nadu Chief Minister Jayalalithaa on September 2, 2014. We found reports by The Hindu documenting this yearly occurrence. A 2016 report by The Hindu also mentioned that a special puja was performed after the statue was adorned with armor and garlanded. The armor is removed on October 31, 2016, after the celebration concludes.

Additionally, as has been well documented, Modi was on a three-day visit to Gujarat since October 9, ending with a one day visit to Madhya Pradesh on October 11. He had not visited Madurai since April 2021, when he addressed a rally in the city and visited the Meenakshi Amman Temple, according to a report by Livemint.

Over the years, there have been several demands to rename the Madurai airport after Thevar to honor him. In June 2018, The Times of India reported on the Tamil political party Muvendar Munnetra Kazhagam's demand for the same, for which they were organizing a conference in Madurai in August.

Bharatiya Janata Party (BJP) leader Subramaniam Swamy, has supported the demand on at least two occasions, in 2014 and 2016.

According to a report by The Hindu from October 17, 2014, Swamy had written to Modi asking him to instruct the Ministry of Civil Aviation to make an announcement renaming the airport. In August 2016, he wrote to Modi once again, reiterating the same demand, according to a PTI report published by Financial Express.

A fabricated post is being shared to claim that Modi attended the birth anniversary celebrations of Tamil freedom fighter Muthuramalinga Thevar and issued an order to rename the Madurai aiport after him. However, the celebration in question has not occurred yet, and Modi has not issued such an order. A post has been created to look like a particular news publication and is being shared with this fake claim. Therefore, we have marked this claim false.

The temples in Tamil Nadu have to pay more for electricity than churches or mosques.