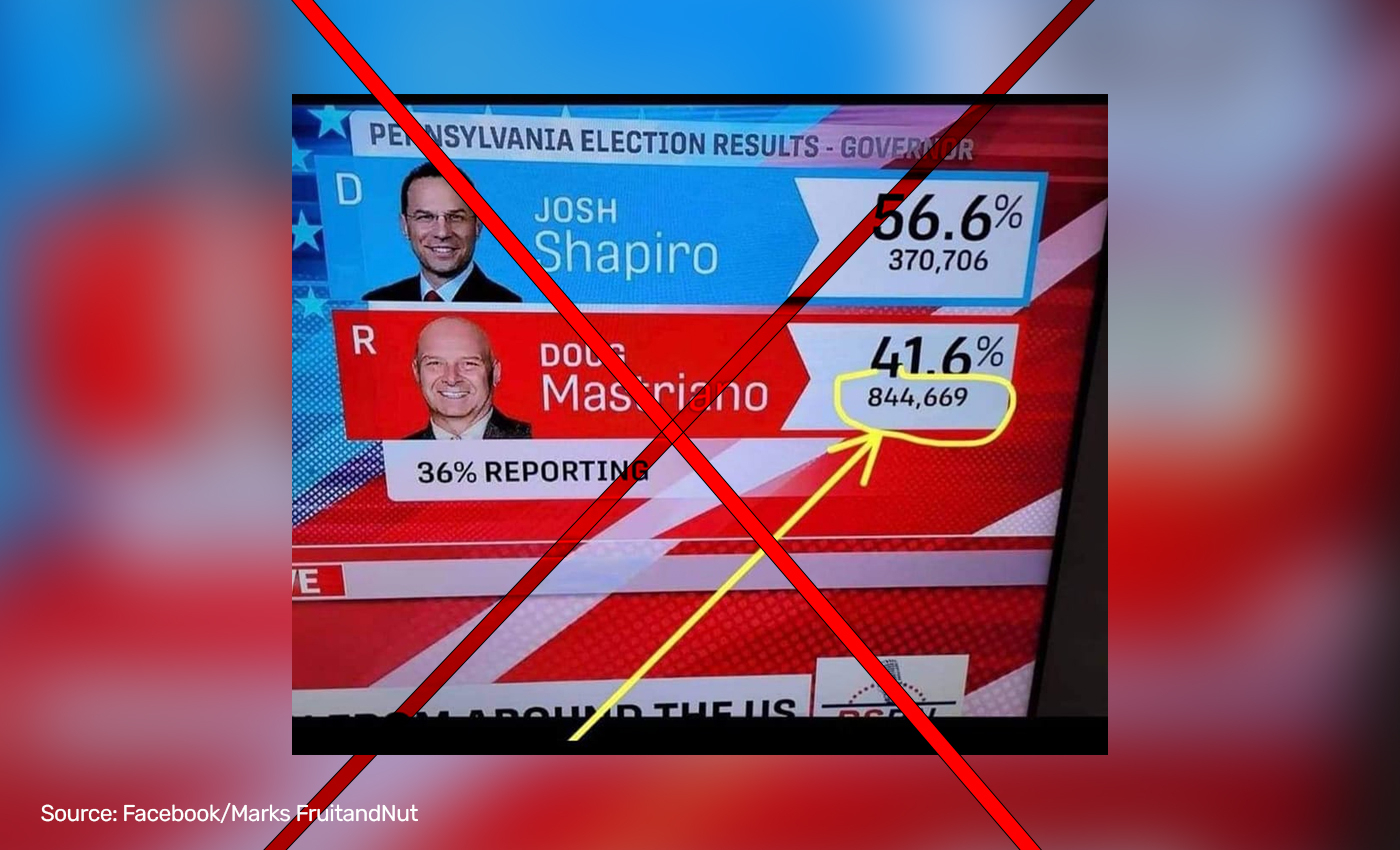 The graphic with the incorrect vote count was an error made by the network and was rapidly corrected. It is not evidence of election fraud.

The United States' 2022 midterm elections, held on November 8, have seen an enormous spike in misinformation on social media concerning the integrity of the election. On November 10, a Facebook post shared a screenshot of the Right Side Broadcasting Network (RSBN)'s Election Night broadcast, which aired live on November 8. The image shows Pennsylvania gubernatorial candidates Josh Shapiro (D) with 370,706 votes and "56.6 percent," and Doug Mastriano (R) with 844,669 votes and "41.6 percent." The error in the proportions of votes attributed was circled in the screenshot. Another user shared the photo on Instagram, stating that it showed election fraud. However, insinuations and claims that there was election fraud in the Pennsylvania governor's race are invalid.

On November 8, RSBN live-streamed an Election Night broadcast, a video of which is available on its website. At around the 00:50:12 timestamp, anchors Brian Glenn and Vanessa Broussard discuss the election night returns. The on-screen graphic shows Shapiro with 370,706 votes and "56.6 percent," and Mastriano with 844,669 and "41.6 percent," with 36 percent of precincts reporting. These were clearly incorrect numbers as they did not match the percentages.

However, the anchors immediately notice the errors in the proportion of votes attributed to Mastriano and Shapiro. At the 00:51:03 timestamp, Broussard touches the microphone in her ear and points ahead, seeming to notice the numbers are incorrect, and says, "I'm a little confused at this graphic, Brian. Correct me if I'm wrong. Yes, the math does not add up." Glenn responds, "We'll get a correction on that," and the video cuts to live footage of former President Donald Trump's party at his Mar-a-Lago home.

The broadcast continues, and at the 2:08:16 mark, the live broadcast features an updated graphic showing Shapiro with 2,185,911 votes at 54.6 percent and Mastriano with 1,744,382 votes at 43.6 percent, with 68 percent of precincts reporting. Clearly, the original graphic appears to have been an error made by the RSBN production team, and it is not proof of fraud or tampering by any electoral officials. Production errors are common in live broadcasts, especially amid the stresses of an event such as Election Night, with data, charts, and tables having to be regularly updated.

Furthermore, RSBN issued a statement on November 11, confirming that it was an error by its team due to server issues by its third-party service provider. RSBN's team was forced to manually input numbers into the system for the first five hours of the broadcast. RSBN apologized for any confusion, stating that "this was an example of a human error, not an intentional public misleading."

They explained that "the issue included incorrect vote counts and incorrect percentages, which were displayed on screen for just over a minute starting at 10:04 p.m. ET and ending at 10:05 p.m. ET," adding that "Our talented anchors caught the error and corrected it on-air, informing everyone the graphic was incorrect and the numbers did not add up. We immediately took it off the air when it was brought to our attention. The numbers were incorrect compared to the actual numbers tabulated by the secretary of state of Pennsylvania."

Logically observed several items of news coverage of the live results of the Pennsylvania gubernatorial race, and none mentioned the numbers that are being shared online. The New York Times also published a report on the governor's election results, citing the Associated Press (AP). The report showed Shapiro winning the race, having polled 2,985,433 votes and 56.3 percent of the vote, with Mastriano achieving 2,224,406 votes and 41.9 percent of the vote.

The incorrect number on the election graphic broadcast by RSBN resulted from a human error and was not proof of election fraud. RSBN's anchors pointed out the error on live television and asked for it to be corrected, and when the graphic next appeared, it had been updated to reflect the latest, correct numbers. The network has also released a statement admitting, explaining, and apologizing for the error. Therefore, we have marked this claim as false.