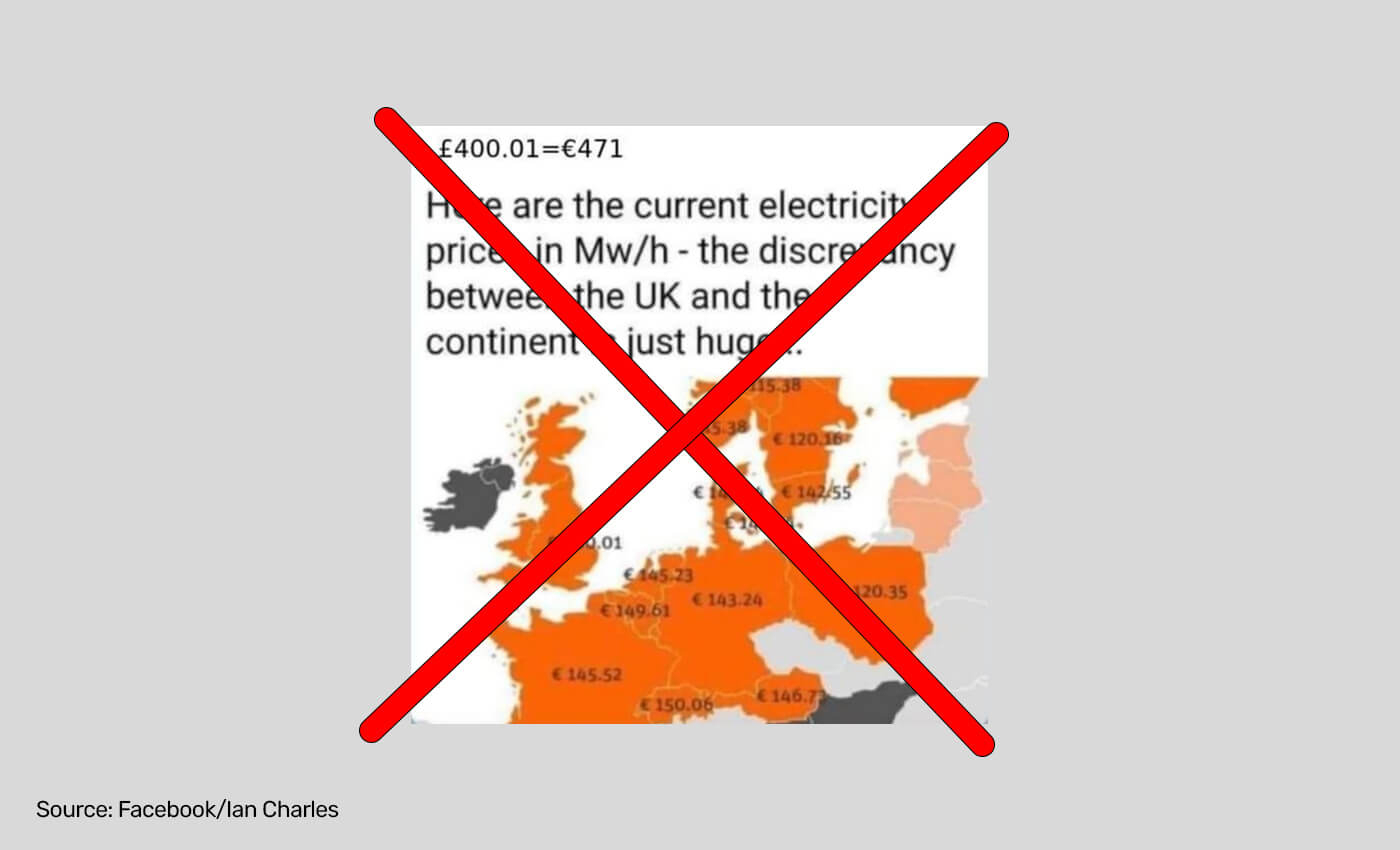 Data from September 2021 is misinterpreted as data representing electricity prices in the U.K. and other European countries in 2022.

Consumers in the United Kingdom and rest of Europe are feeling the burn of sharp increase in the price of electricity over months. While these high prices worry the general public, several posts on social media are spreading various misleading and false narratives. On August 24, a Facebook user shared an image containing the map of Europe with number written in the pound symbol written over most countries and claimed, "Here are the current electricity prices in Mw/h - the discrepancy between the UK and the continent is just huge..." According to the image, the price for electricity allegedly stood at £400.01 and in other European countries it averaged around £85 (€100). The Facebook caption said the news media reports "explained the cost of energy in the UK is only as high as it is because that's the general price everywhere." It adds that this graphic, showing the price of electricity across Europe, contradicts the media reports. This image has been viral on social media for about a year, with various narratives against the government.

The exact viral image was shared on Twitter on September 2021. In the comments section, the author of the tweet reveals the source of the image as the European Power Exchange (EPEX SPOT). EPEX SPOT is a Paris-based electric power exchange. The present or August 2022 data accessed from EPEX SPOT did not match any numbers in the viral image.

A House of Commons briefing on domestic energy prices indicated a rise in wholesale energy prices in the second half of 2021. In the second half of 2021, "U.K. domestic gas prices were below those in most of the EU, while U.K. electricity prices were higher than in most of the EU." Electricity prices have noticed an increase for much of the last decade. "The Average bills were £760 in 2021 compared to £450 in 2020, a 36% real increase." The briefing listed a few reasons for the price rise, including the COVID-19 lockdown and the Russian invasion of Ukraine in 2022 which resulted in a disrupted supply. They mentioned that "increased gas prices fed through to increased electricity prices."

In September 2021, S&P Global Commodity Insights, an independent provider of information and benchmark prices for the commodities and energy markets, wrote an article on U.K. electricity prices in Europe. They noted that on September 13, 2021, U.K. prices tripled to record levels as "tight generation margins combined with soaring power import, natural gas, and carbon prices." They explained the U.K had faced intense pressure on rising power prices "due to its high dependence on gas and renewables to generate electricity." They assessed on September 14 that U.K.'s day-ahead market baseload price was at £540.15 per megawatt-hour (MWh). Also, on September 29, 2021, Bloomberg wrote that electricity prices surged on September 15 to a record £574.20 per MWh.

On August 19, 2022, CNN explained in an article why the U.K. energy prices are rising much faster than in Europe. They reasoned that the markets designed by the U.K. government operate in different ways when compared with other European markets. European markets are believed to have harder regulations on suppliers and rules preventing them from suddenly increasing the price.

Logically published a report in August 2022 detailing why British bills are increasing faster than in some European countries. The report pointed out a few factors that have contributed to this surge, such as energy suppliers in the United Kingdom, the Ofgem price cap, the rising natural gas prices, high demand outside of Europe, and an increase in British bills.

On August 26, 2022, Associated Press News reported that due to the new energy price cap for October 1 to December 31, 2022, consumers are expected to pay about 80 percent more per year on their household energy bills. It means they must pay £3,549 per year for gas and electricity. It is expected to increase when the price cap is updated again in January, exceeding £4,000.

Electricity bills in Bengaluru will increase drastically once double meters are installed.