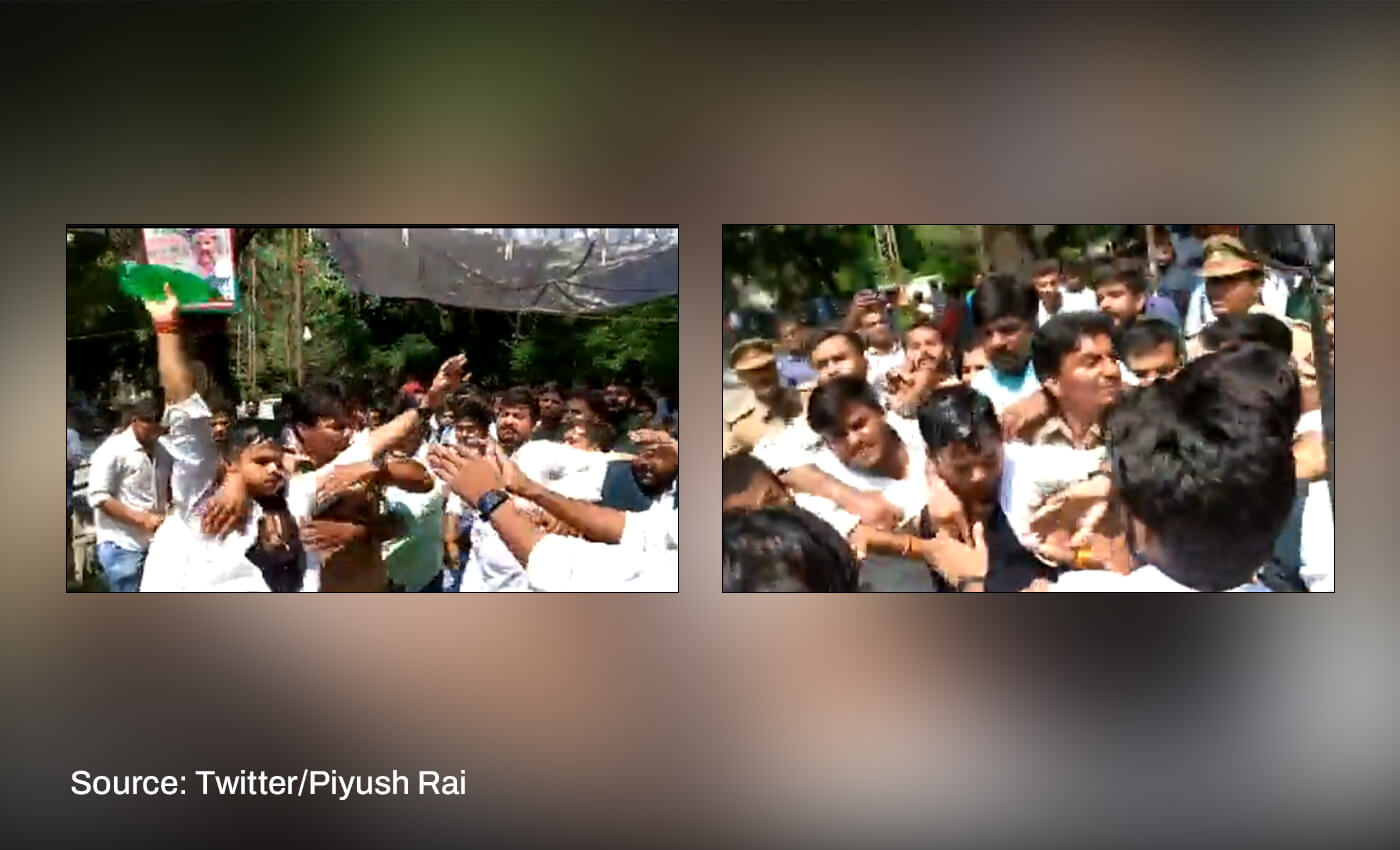 While a man did attempt self-immolation, the protest was not over unemployment but a fee hike at Allahabad University in Uttar Pradesh's Prayagraj.

Unemployment has become a burning issue in India and the opposition is trying to use it as a tool to corner the ruling Bharatiya Janata Party(BJP) government. In this backdrop, a video of some men engaging in a scuffle with police officers is being shared on social media with the context that it shows a man trying to immolate himself as he is frustrated about unemployment in India. The police in the video can be seen trying to subdue one man, who can be seen pouring a liquid over himself. The post has been widely shared on Twitter.

While the video in question does show a man attempting self-immolation, it has nothing to do with a protest over unemployment in India.

On combing through the comments on the post, we found that one Twitter user had stated that the video showed not a protest over unemployment but fee hikes. Taking a cue from this, we ran a search with related keywords and came across several news reports that talked about recent protests being held at Allahabad University over fee hike. One of the news reports took us to a tweet by a verified journalist with the same video, who reported that it showed an incident amid the agitation at the university in UP's Prayagraj, where a student had attempted self-immolation. The journalist, Piyush Rai, added that the police officials, who were on the spot, had managed to stop him.

We then looked into news articles about the ongoing protests at Allahabad University over the multi-fold fee hike in the university for the academic year 2022-23. According to a report by The Quint, the self-immolation attempt took place on Monday, September 19, amid the ongoing protest. The report said that according to Chhatrasangh Sanyukt Sangharsh Samiti, the university had hiked fees by 400 percent. The article also carried the same video and identified the student as Adarsh Singh Badhuria, who reportedly accused the police of harassment and attempted to set himself alight with kerosene. The incident was then followed by a clash between the students and the police officers. Videos obtained from local journalists reporting from the ground show the clashes and the scuffle.

A report by Hindustan Times also said the same and quoted Santosh Kumar Meena, Superintendent of Police (City), saying that Badhuria was one of the students at the protest. Meena added that the student was stopped from his attempt and detained. The report also said that Allahabad University had justified the fee hike saying that it would still be lesser than what some other central universities collect and that Allahabad University gets also gets lesser grants compared to other varsities. It is the first fee hike since the establishment of the university as an independent entity in 1922, AU's public relations officer Professor Jaya Kapoor said, according to Hindustan Times.

It may be noted that several protests have been reported across India for a while now over rising unemployment. According to The Tribune, on September 17, Youth Congress members protested against the BJP government in Ludhiana over price hikes, inflation, and unemployment in India. On September 19, Samajwadi Party (SP) leader and former Uttar Pradesh Chief Minister Akhilesh Yadav led a protest in Lucknow against the ruling BJP in the state over the rise in prices and unemployment. In August, farmers from across India protested at Delhi's Jantar Mantar against unemployment, reported India Today. However, no self-immolation attempt has been reported from any such protest.

While the video does show a young man trying to immolate himself, the post puts an incorrect spin on the reason behind it. In reality, the incident took place during protests over a fee hike at Allahabad University. Therefore, we have marked this claim misleading.