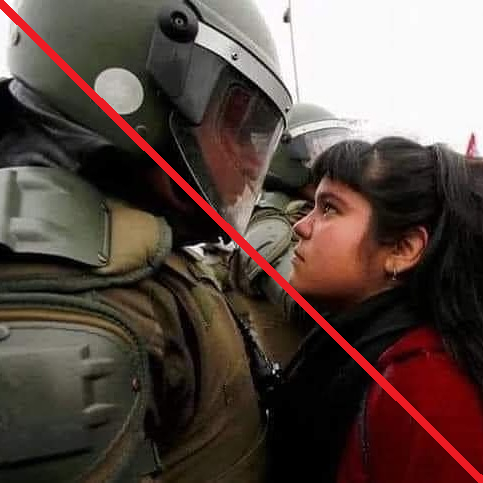 The picture was taken in Chile during a protest in 2016. It has been taken out of context to make it seem like it was shot in Palestine.

Recent social media posts circulated an image of a young girl staring at an armored riot police officer. Captions of this post claim that the girl is Palestinian and that she stood up to an Israeli police officer.

The image was taken in September 2016 in Chile by Carlos Vera Mancilla, a photographer from Reuters. Logically found that the picture was taken outside the general cemetery in Santiago, Chile, through a reverse image search. The caption for the photograph reads, "A demonstrator looks at a riot policeman during a protest marking the country's 1973 military coup." The image used in the photo was taken out of context to make it seem like it was shot in Palestine.

The picture was taken during a protest which marked 43 years of a military coup in Chile, which resulted in President Salvador Allende being overthrown, killed, and replaced with a military government led by Augusto Pinochet, CNN reported. Mancilla told Chilean news website La Tercera that police apprehended two of the woman's friends when she "reacted and stood before the policeman with a defiant look." The photo has been shared tens of thousands of times on social media. The image has been circulating since 2016 and sometimes is misattributed to the issues in Palestine.