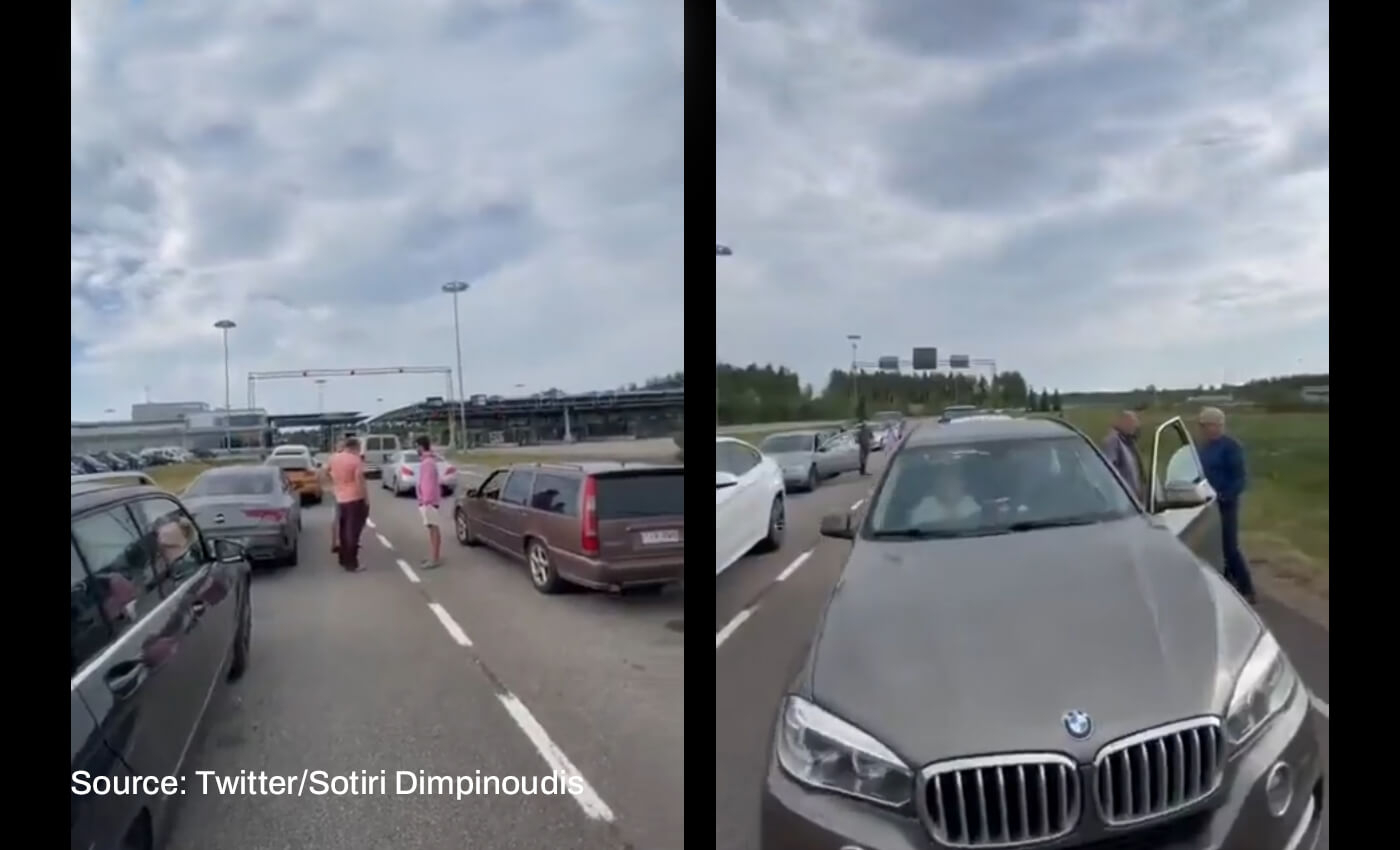 The viral video was made much before Putin's announcement and Finnish Border Guard clarified that the border situation is normal.

A video of a long queue of cars lined up on a winding road is viral on social media, with accompanying posts that the clip shows Russians in a 35-km long queue at the Russia-Finland border. The video, which appears to have first appeared on TikTok and Instagram, was shared on Twitter by one Sotiri Dimpinoudis, who is an independent freelance journalist according to his bio, on September 21 and has garnered over 2.8 million views, 10.6k retweets, and more than 25k likes. The text within the video says that it shows the Russian-Finnish border and that people are everywhere. Dimpinoudis claimed in his tweet that the queue is increasing by the hour in light of Russian President Vladimir Putin's announcement enforcing a partial mobilization, on September 21, to support troops against Ukraine. The video was tweeted by several other people and shared on YouTube after the announcement, with the context that it showed Russians fleeing their country amid the order and escalating tensions. Several media outlets also shared the video and used it as a source to report on long queues at the Russia-Finland border.

We found that the clip is actually an old video and does not show the current situation at the Russian-Finland border in Vaalima or on September 21, when Dimpinoudis shared it. On going through the comments on the Twitter video, we came across several people refuting the claim that it showed the current situation, adding that the clip appeared to be old. Taking a cue from this, we ran a search with related keywords on YouTube and came across the same video posted by a handle called Igor in Russia on September 19, two days before Putin's announcement of partial military mobilization. According to the caption of the clip, the video had been taken a couple of weeks prior. The video owner also posted an update in a comment, stressing that he had made the video before any announcements. He also posted another video where he called out fake news surrounding his original video and claimed that he had filmed it at the border some time ago, showing the original unedited footage without the music and the text, to back himself up.

While this appeared to prove that the video was certainly from before Putin's announcement, we also came across several statements from Finnish officials who swung into action to dispute the claims on social media and ensure that the situation was normal.

Within hours of the video being posted, the Finnish Border Guard took to their official Twitter handle to say that the situation at Finland's borders had not changed with the announcement of Russian mobilization. "There are videos circulating on social media, at least some of which have already been filmed before and now taken out of context. There is incorrect information in circulation," they added. On September 22, they reported that while incoming traffic at the eastern border had increased during the night, the amount was still small compared to the time before the pandemic. "Our resources are sufficient, and the situation is under control," they wrote.

Matti Pitkäniitty, the Head of the International Affairs Unit at the Finnish Border Guard, also tweeted about the situation. In one tweet on September 21 evening, he stressed that the situation at the border was normal and the usual queueing and urged people to stay calm. In another tweet, he said that Vaalima is the border crossing point and shared live footage of the border available on the weather cam. The footage showed that there was some traffic on the entry side from Finland to Russia and none at all on the other. In yet another tweet on September 22, Pitkäniitty wrote that while traffic had intensified on the border, with 4,824 Russians arriving in Finland, this was lower than on a normal weekend. In a later thread, he updated that as of 9pm Finnish time on September 22, despite border traffic seeing a spike, the intensity was similar to that on weekends.

Further, Ville Cantell, Director at the Ministry for Foreign Affairs of Finland, tweeted soon after the video in question was posted, saying that information about long lines at the border is not correct. "Situation at border normal. Videos are not of current situation," he wrote. He also shared a tweet by the Border Guard of Southeast Finland, stating that the queue at the border was only 250 meters long and added in another tweet that the situation was normal and not unlike normal weekends.

Harri Ohra-aho, the Ministerial Adviser for Intelligence at the Ministry of Defence of Finland, reiterated on September 21 evening that videos circulating on social media were filmed earlier and taken out of context. "There is incorrect information on the move," he added.

Crossing points along the Finnish-Russian land border are among the few entry points into Europe for Russians after several countries shut their land borders and air space to Russian planes in response to the invasion of Ukraine. However, Finnish Prime Minister Sanna Marin said that the government is reassessing this and considering ways to reduce traffic from Russia, reported Reuters. She said that the possibility of closing Russian tourism to Finland was on the table.

As the Russia-Ukraine war carries on President Putin, in a videotaped national address, ordered a partial mobilization of reservists in Russia to bolster his forces in Ukraine. The move led to widespread anger and protests in Russia and over 1,200 arrests.

An old video of usual queues at the Vaalima border crossing points between Russia and Finland is being misrepresented to claim that Russians are fleeing their country. Finland's officials repeatedly stated that the visuals being circulated are old and that the actual situation is very much normal. Therefore, we have marked this claim false.