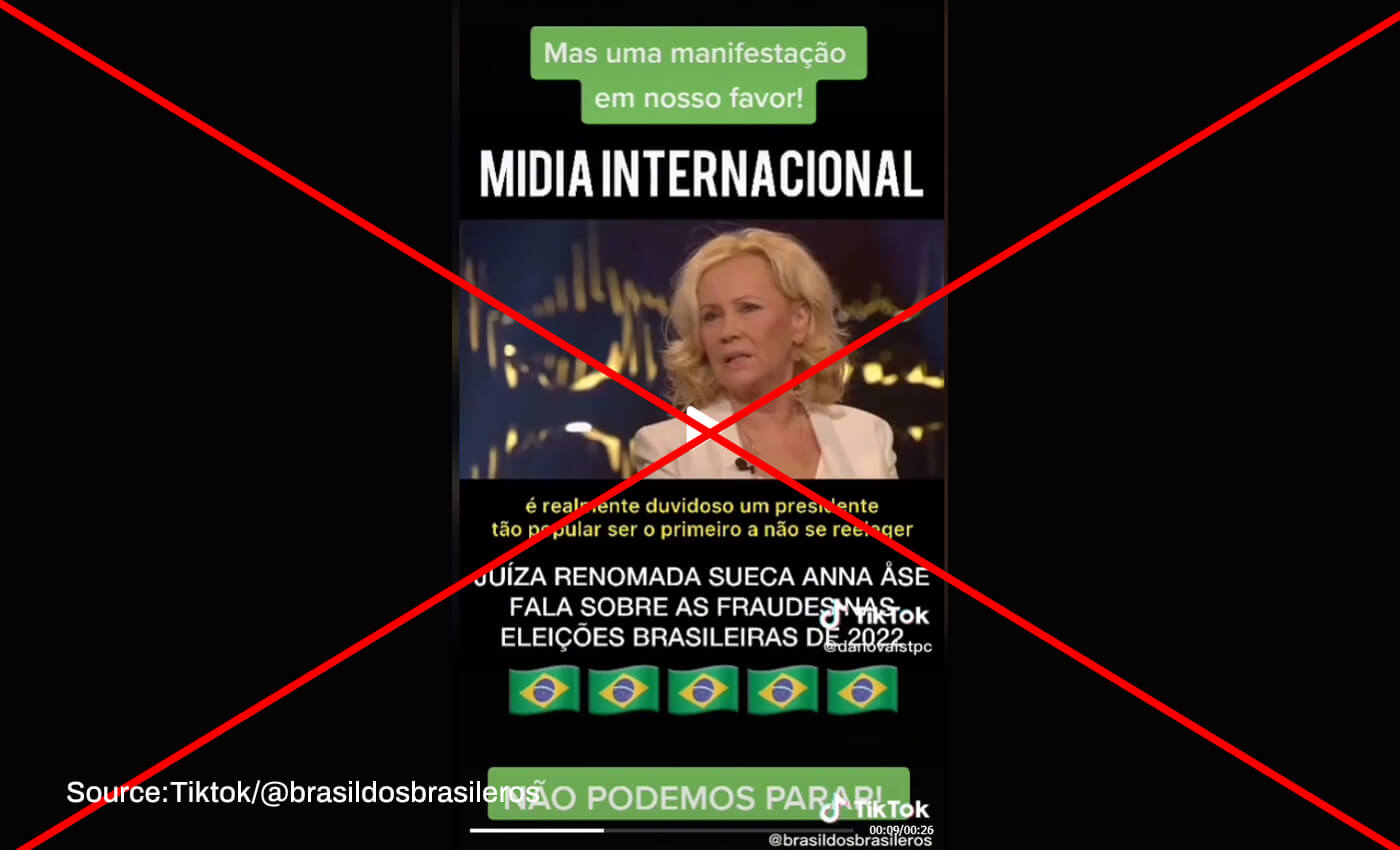 The video is of singer Agnetha Fältskog talking about the joy of being home with her kids. The Brazilian Defense Ministry has ruled out voter fraud.

A video widely shared on Tiktok shows an alleged Swedish judge, Anna Åse, claiming obvious voter fraud in the Brazilian election. She appears to state that the Brazilian people are afraid of what has happened in the election and find it very unlikely that such a popular president would not be reelected, especially considering the information of the obvious voter fraud in the election. She supposedly continues, saying that if you analyze the information carefully, it confirms suspected voter fraud, and argues that the left has done everything in its power to remove Brazil's most honorable man from power, and that it is a true shame for democracy.

Henrik Brandão Jönsson, Latin American correspondent at Swedish newspaper Dagens Nyheter has fact-checked the video with the paper's resident fact-checker, Hugo Ewald. The video does not show a renowned Swedish judge called Anna Åse. It shows Agnetha Fältskog, Abba co-founder and singer, during an interview on the Scandinavian talkshow Skavlan in 2013. In the interview, Agnetha talks about the joy of being home with her two children instead of touring with the band. She says she essentially moved from a life in luxury suits in expensive hotels to taking care of the dishes, and that it was wonderful. Agnetha had two children with Björn Ulvaeus, her Abba bandmate.

Logically has not been able to find a judge named "Anna Åse" in Sweden. Ewald also discovered that the video's creator was the Brazilian far-right network Brasil Dos Brasileiros (Brazil for Brazilians). The Brazilian fact-checker Lupa has also debunked the video.

This is not the only case where pro-Bolsanaro actors have used edited media for political purposes. Pop singer Lady Gaga was recently presented as a "Prime Minister of the Hague Court" in a video montage resembling a video conference with Bolsanaro. The video's message suggested a federal intervention would take place in Brazil to recount the votes in the election. However, the video does not consider that The Hague has no Prime minister.

Additionally, the Carter Center was invited by the Brazilian Superior Electoral Tribunal to assess issues related to the function and transparency of the voting technology system, alongside disinformation and legal narratives surrounding the election in Brazil. The center found that public resources had been used to create a sophisticated disinformation network. Both sides were attacked, but Lula's campaign encountered a much higher degree of disinformation.

Moreover, Logically has researched the spread of the video of Agnetha Fältskog. Using codewords from the video's caption, we located 27 accounts that had uploaded the video up to November 8. Most of the videos had zero to 400 views, with one video reaching 20,000 views. The accounts that had uploaded the video had also uploaded other pro-Bolsanaro content, with the most common claim across all accounts being that the election was stolen. There were also calls for military intervention, as well as claiming that Alexandre de Moraes. a judge at the Brazilian Supreme Court, was initiating censorship.

Several of the accounts had unusually high activity on the dates around the second round of the Brazilian Election on October 30. 13 of the 27 had uploaded around 15-50 videos since October 28, and one account had uploaded 385 videos since October 28. Many accounts also demonstrated a change in the content shared to TikTok: they had previously uploaded personal content and then moved to political content, political communication, and misinformation. The amount of videos uploaded suggests that the activity is not organic, but the attempt of a disinformation campaign. The high activity indicates troll farm activity from the pro-Bolsanaro milieu in Brazil and aligns with the Carter Centers' conclusions about widespread disinformation networks during the election.

The video does not show a purported judge known as Anna Åse, and the evidence examined points to a disinformation campaign. Therefore, we have concluded this claim to be false.

Brazilian police stopped Jair Bolsonaro's son from leaving the country after the ex-president tried to overturn the democratic elections.