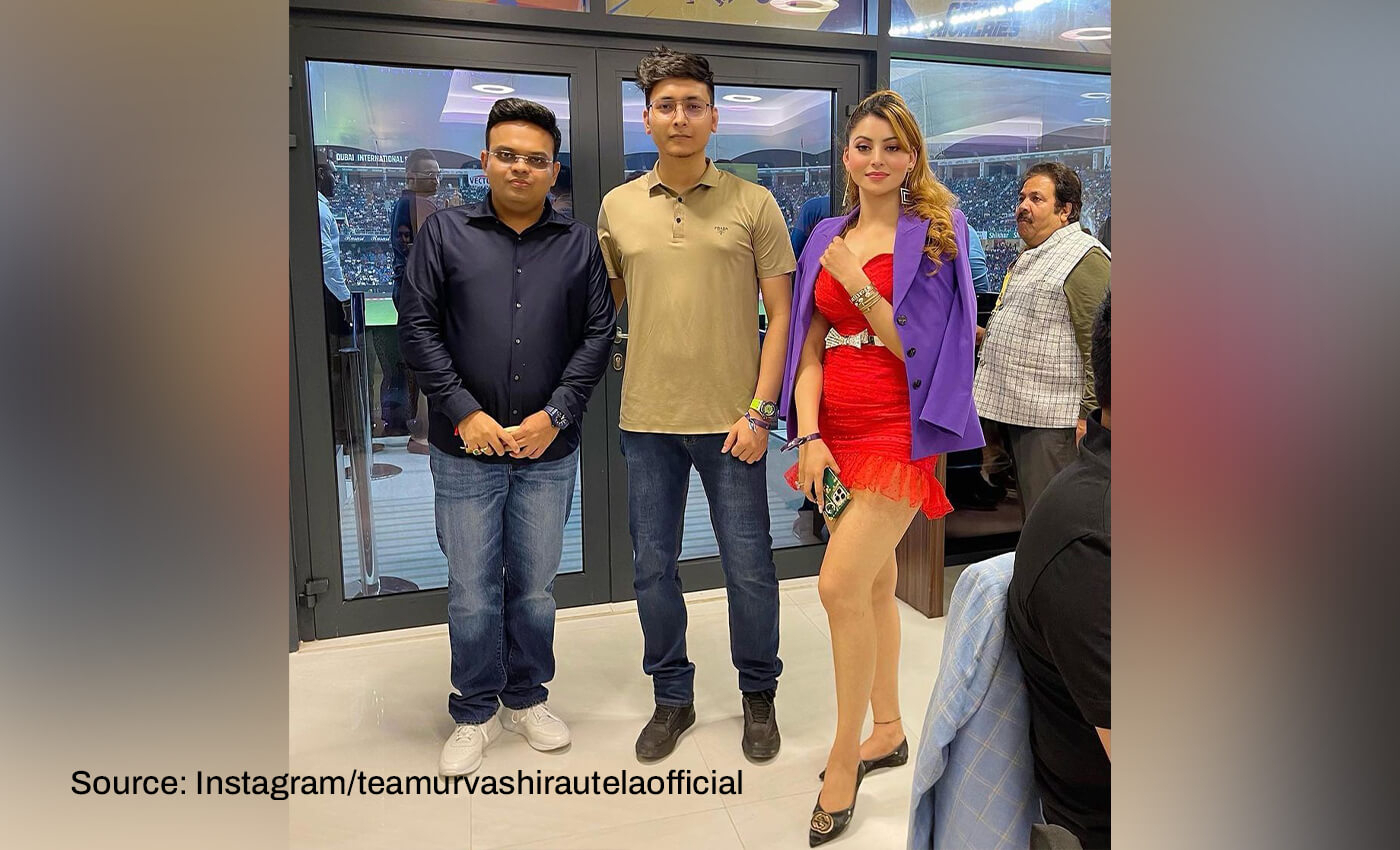 The image of Jay Shah posing with actor Urvashi Rautela and her brother Yashraj Rautela in Dubai has misidentified Rautela as Saad Bajwa.

A photo of Board of Control for Cricket in India (BCCI) Secretary Jay Shah posing with two people - one man and one woman - has been going viral on social media since September 2. This image went viral after the India-Pakistan match in the 2022 Asia series. The message being shared with the photo claims that the man next to Shah is Pakistan General Qamar Javed Bajwa's son Saad Bajwa and insinuates that the former has relations with Pakistan.

On conducting a reverse image search on the viral photo, we discovered a photo of the same man and woman sitting next to each other dressed in the same outfits on a fan page for actor Urvashi Rautela. The post identified the woman in the viral photo as Urvashi Rautela. Next, we checked the actor's official Instagram page and found several photos featuring the same man. The caption of one of the posts, uploaded on the occasion of Raksha Bandhan, identified him as Rautela's brother Yashraj.

We then checked Yashraj Rautela's own verified Instagram profile and found a photo of a man, ostensibly himself, wearing the same shirt as seen in the viral photo and waving India's flag. The picture was taken at a cricket stadium, geolocated by Instagram as Dubai International Stadium.

Next, we searched for Yashraj Rautela on Instagram and found a post with the viral photo and one more photo of just Yashraj and Shah. The said post identified the people as Urvashi, Shah, and Yashraj, adding that the photograph was taken on August 28, the day of India's first match against Pakistan in the ongoing Asia Cup. A news report by India Today also confirmed Rautela's presence at India's August 28 Asia Cup match against Pakistan, played at Dubai International Stadium, along with Shah.

This latest false claim comes in the wake of misinformation being shared that Shah had insulted the Tricolour by refusing to hold it after India won the Asia Cup cricket match on August 28 against Pakistan. In fact, Shah, the president of the Asian Cricket Council (ACC), was simply following International Cricket Council guidelines. As an ACC representative, waving the Indian national flag would have caused an ethical conflict of interest.

A 2018 Facebook post from Fashion Hub PK shows the walima ceremony of Saad Siddique Bajwa, son of Qamar Jawed Bajwa, where father and son can be seen pictured together. Saad is an associate in the corporate team at Clyde & Co, Dubai, UAE. Qamar Jawed Bajwa is a Pakistani general and current Chief of Staff of the Pakistan Army. The man identified as Saad in this picture does not resemble the man pictured with Jay Shah, confirming that Shah was not with Saad Siddique Bajwa on August 29 at Dubai Cricket stadium.

A photo of Jay Shah posing with actor Urvashi Rautela and her brother Yashraj is being shared, misidentifying the latter as Saad Bajwa, the son of the Pakistani General Qamar Javed Bajwa. Therefore, we have marked this claim as false.