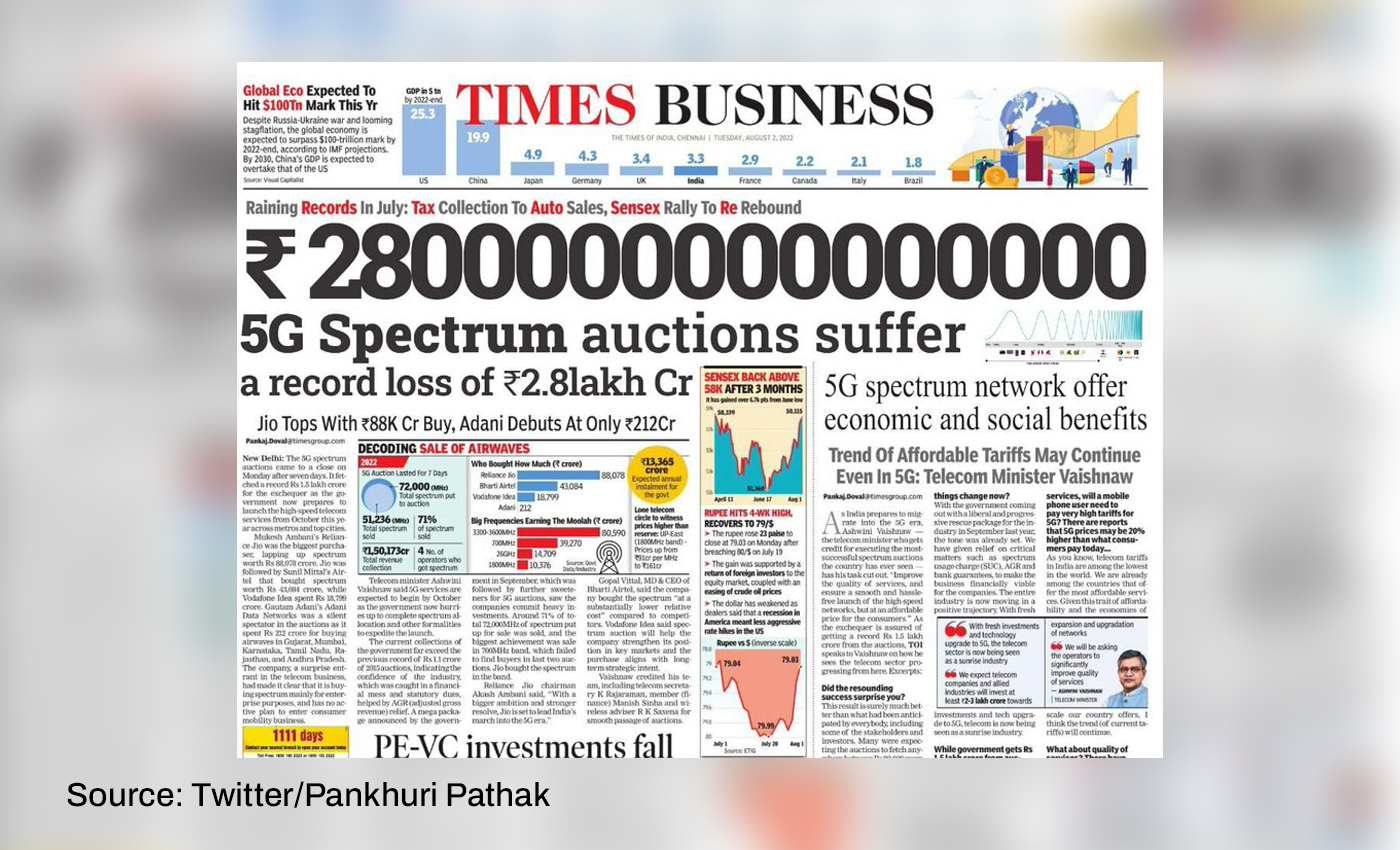 The newspaper clipping in question is morphed. The original headline stated that the Centre had earned ₹1.5 lakh crore from the 5G spectrum auctions.

After the latest 5G spectrum auction ended on August 1, 2022, an alleged screenshot showing a clipping of the 'Times Business' page of 'The Times of India' (TOI) newspaper was shared on social media. The text on the clipping stated that the government recorded a loss of ₹2.8 lakh crores during the 5G spectrum auction in a banner headline. It is being referred to as the "5G scam" of the Bharatiya Janata Party (BJP) on social media by many Congress party members, leaders, and other accounts.

The alleged clipping included the name of journalist Pankaj Doval, Times of India's national editor, in the byline section. We went through Doval's Twitter account and found that on August 2, he had posted a Times Business page quite similar to the viral clipping. The description read, "That's how the Business Page looks like when you start the day with record spectrum auctions and end the day with record auto sales…" Although the article has been penned by Doval, it does not carry the same headline seen in the viral picture. The original article uses the headline, “5G spectrum auctions earn Centre record Rs 1.5 lakh crore.”

The original report was published in The Times of India on August 2, 2022 and is available on the publication’s website as well. The report explained how the 5G telecom spectrum auctions concluded, receiving upwards of ₹1.5 lakh crore after seven days of bidding. The government is preparing to launch high-speed telecom services from October 2022 across metros and top tier cities.

Furthermore, Business Standard reported that in the 2022 5G spectrum auction, Reliance Jio emerged as the top buyer in the airwaves auction, spending over ₹88,000 crores, more than half the total bidding amount of ₹1.5 lakh crore. The Department of Telecommunications has provided all the details of the 5G spectrum auctions on its official website as well.

However, the spectrum auction has raised questions and concerns among opposition leaders. According to Hindustan Times, Dravid Munnetra Kazhagham MP A Raja last week demanded a probe into the 5G auction for the government’s “poor” show at the auction. “The government has itself estimated that 5G would be sold up to 5 lakh crore. But now 5G has been auctioned for only 1.5 lakh crore,” Raja told the media. Raja was making reference to the ₹4.3 crore reserve price set for a total of 72 gigahertz of radiowaves that were up for grabs, as reported in the media. Hindustan Times said the government realised only 35% of the reserve price .

This is not the first time spectrum auctions in India have led to a political fracas. In 2010, the then Comptroller and Auditor General of India (CAG), Vinod Rai alleged that 122 licenses for 2G spectrum were issued to telecom operators without an auction, resulting in a notional loss of ₹1.76 lakh crore to the national exchequer. However, the licenses were scrapped by the Supreme Court in February 2012. Media reports later clarified there was no real loss and if the spectrum could be auctioned, the exchequer would have seen an estimated gain of Rs 1.76 lakh crore. However, the allegations had resulted in the arrest of the then Union Minister A. Raja who had to spend 15 months in jail. He was, however, acquitted in 2017 with others by a CBI court in 2017 of all charges. In 2021, Vinod Rai also issued an apology to former Member of Parliament Sanjay Nirupam after the latter had filed a defamation suit against Rai for trying to implicate former Prime Minister Manmohan Singh and him in the matter as well.

The original newspaper report stated that the government had earned ₹1.5 lakh crore from the 5G spectrum auction. TOI didn't publish a report with a headline mentioning alleged losses made at the auction. Hence, we have marked this claim false.