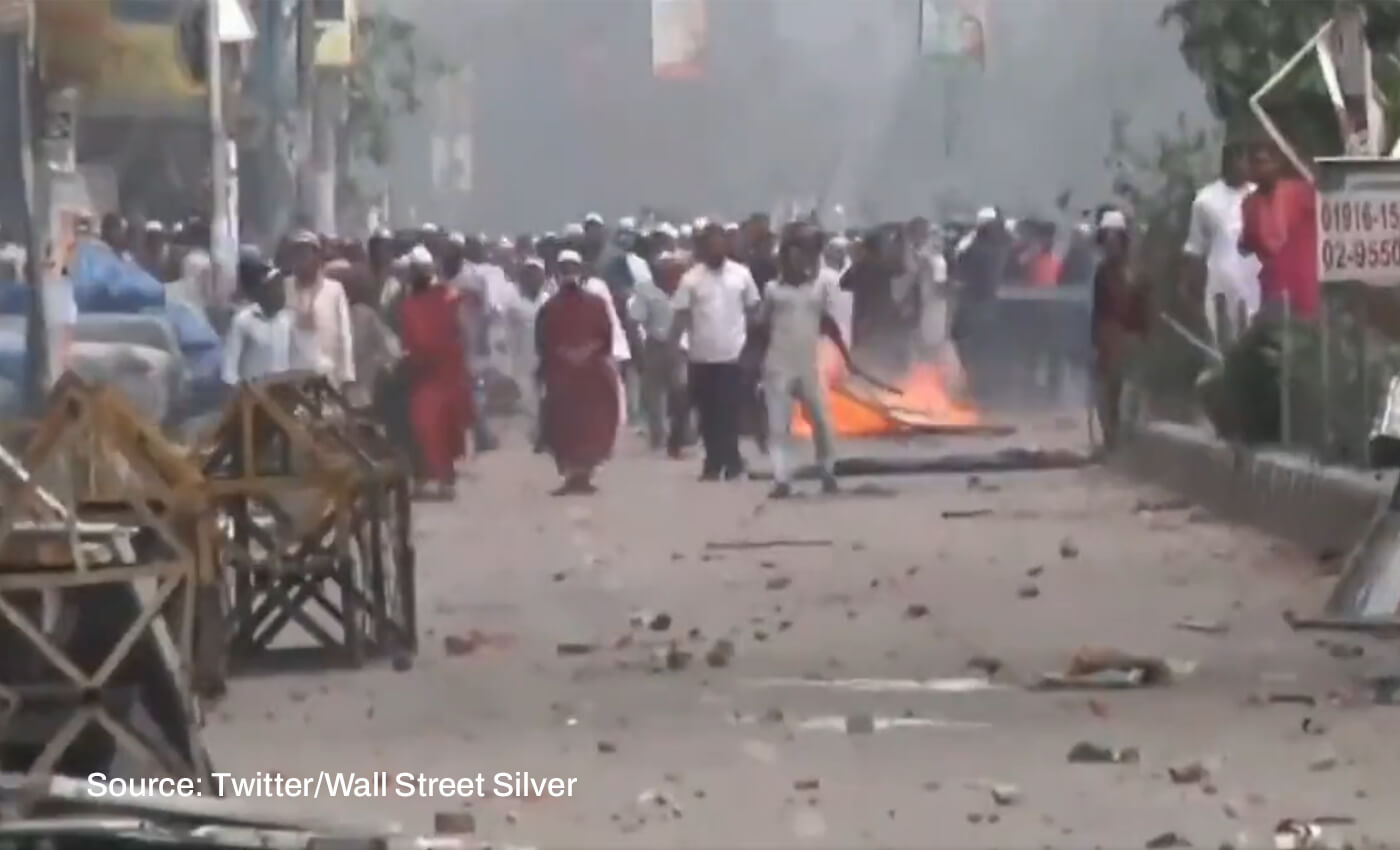 A 2013 video of Bangladesh's Islamic groups protesting over anti-blasphemy law is widely shared as one from the recent fuel price hike protests.

On August 6, Bangladesh increased its fuel prices by around 50 percent, the highest hike since its independence in 1971, Reuters reported. Massive protests followed the rise in fuel prices in the country. Soon a video started populating on social media showing a mob pelting stones and torching vehicles at the police officials. In the video, the police officials are seen firing bullets at the mob. The caption of one of the posts shared by the Twitter account @WallStreetSilv reads, "Bangladesh… protests and hard clashes have erupted in several cities after the government has decided to increase petrol prices by 51% and diesel by 42% effective midnight…. Huge lines are reported at petrol stations all over Bangladesh."

The shared video is not of the new protests fueled by the petrol and diesel price hike. The same video was posted by The Telegraph on their YouTube channel nine years ago on May 6, 2013. According to the description of the video, it showed Islamic activists demonstrating in favor of an anti-blasphemy law.

According to a BBC report dated May 6, 2013, the protest was organized by Hefazat-e Islam in Dhaka. The incident left at least 23 people dead, including two police officers, as the protesters blocked roads with burning tires and logs, after which the police resorted to sound grenades, water cannons, tear gas, and rubber bullets; the report added. "Hefazat-e Islam- a union of around a dozen Islamist organizations, sought to impose a stricter form of Islam on Bangladeshi society," the report added.

On May 5, 2013, a video related to the protest was also published by the news agency Associated France-Presse. USA Today also published a report about the protest, adding that the government rejected the demand, insisting that "Bangladesh is governed by secular law."

The Twitter account Wall Street Silver has previously shared various misleading and false claims which have also been debunked by Logically and other fact-checking organizations.

According to a Reuters report, the Bangladeshi government increased the cost of gasoline by over 50% on August 6, 2022 leading to a series of protests across the country.

A statement from the Ministry of Power and Mineral Resources stated that the price of octane has increased by 51.7% to 135 takas ($1.43) from the previous rate of 89 takas ($0.94 dollars). The country observed massive protests for hiking fuel prices, resulting in demonstrations across the country. Protesters have demanded that fuel prices be lowered, the hike in transport fares be canceled, and half of public transport students' fares be assured. Angry demonstrators surrounded power stations demanding the shocking price increase be reversed.

The video in question is a nine-year-old clipping and is unrelated to the recent protests over fuel price rise in Bangladesh. Therefore, we have marked this claim false.