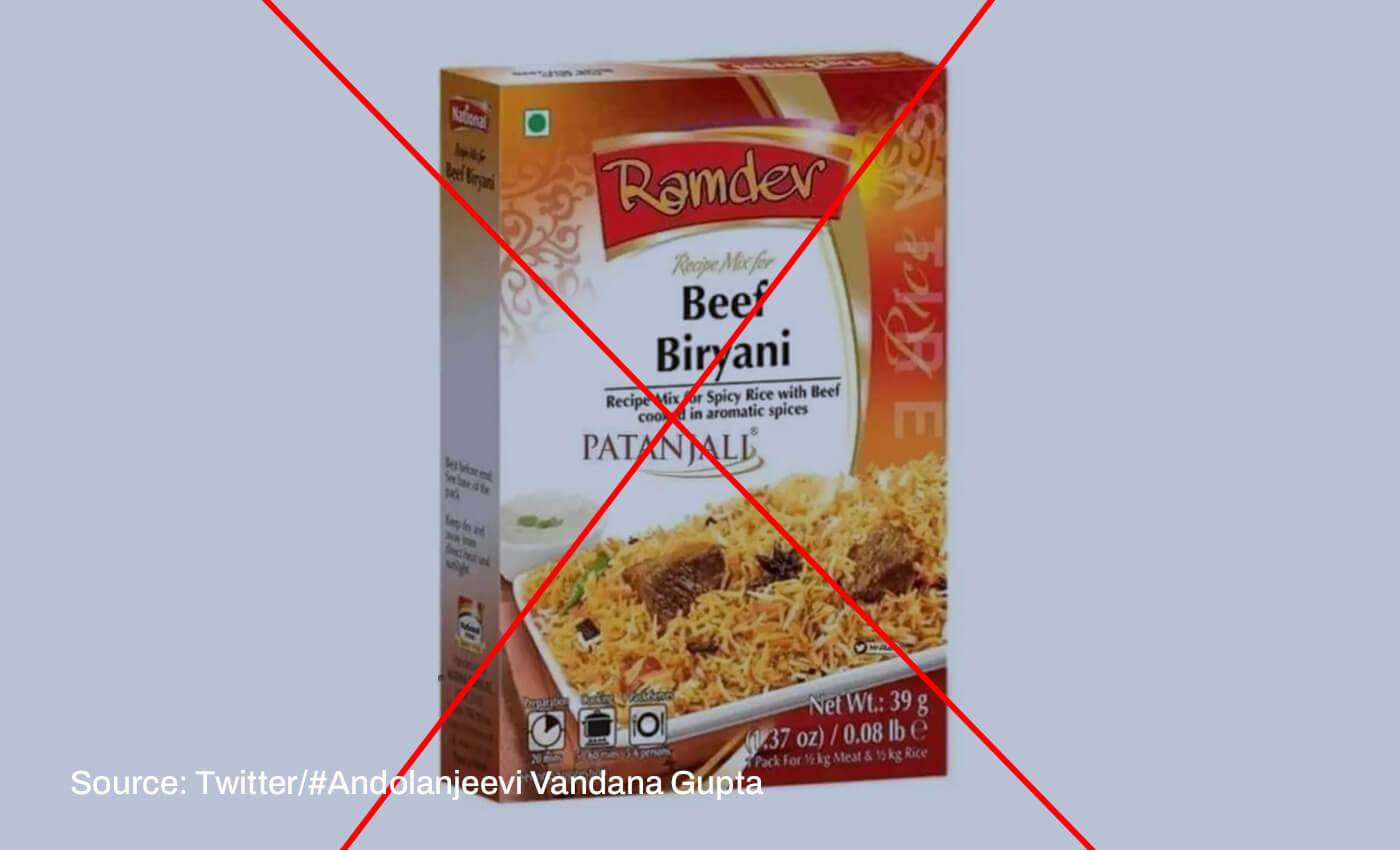 An image of a box of beef biryani recipe mix manufactured by a Pakistani company National Foods was morphed to show it as a Patanjali product.

A photo of a beef biriyani recipe mix purportedly sold by Indian company Patanjali is going viral on social media with the claim that Indian yoga guru and founder of the company Baba Ramdev sells the spice mix. The photo, which appears to be of the packaging of the spice mix, is branded Patanjali and bears Baba Ramdev's name at the top. The photo is being shared across Twitter and Facebook to poke fun at and condemn Ramdev for manufacturing and selling a beef-related product.

Looking closely at the photo, we noticed that the side of the spice mix box bears the name 'National.' Keeping this in mind, we ran a reverse image search on the box and immediately found the product listed on the website of a company called National Foods. "National Beef Biryani Recipe Mix is combination for spicy rice with cooked beef, specially made by a panel of experts, using aromatic spices and the finest ingredients in exactly the right measure. It will enable you to cook meal with ease," read the product description on the website. We found that the box of this spice mix is the exact one that is being shared on social media, except that the name of the brand ‘National’ on top has been replaced with 'Ramdev.' Further, we noticed that the space between the biriyani visual and the last line of text on the original photo of the box had been used to add the Patanjali branding in the viral photo. The rest of the image had been untouched.

We also checked the website of National Foods and found that it is a Pakistani multinational food company established in 1970. It started its journey as a spice company, from where it expanded into several categories of food products such as spices, recipe mixes, sauces, spreads, and more. It has a presence in 40 countries on five continents and has subsidiaries in UAE, the U.K., and Canada.

We also searched the Patanjali Ayurved website for a listing of any such spice mix product and came up with no results. The closest option to our search elicited several kinds of rice sold by Patanjali. Patanjali Ayurved website was Established in 2006. It sells many products such as food, cosmetics, medicines, and books. We also noticed that Patanjali items only bear the company's branding and not of Ramdev, as seen in the viral photo.

The consumption of beef has long been a source of high friction in India, where many Hindus consider the cow a sacred animal. Most recently, actor Ranbir Kapoor's revelation that he enjoys eating beef led to the widespread social media campaign to ban his film Brahmastra, In the recent years, reports of vigilantes often called ‘gau rakshaks’ or ‘cow protectors’ killing or beating up people over suspicions of cow slaughter or transport, especially in north India, have become common in the country.

Baba Ramdev-founded company Patanjali does not sell any beef biriyani recipe mix or a similar product. A photo of such a spice mix, sold by a Pakistani company, has been edited maliciously to make it seem like a Patanjali product. We have therefore marked this claim false.

Hydroxychloroquine can increase survival rates of COVID-19 by 200 percent.