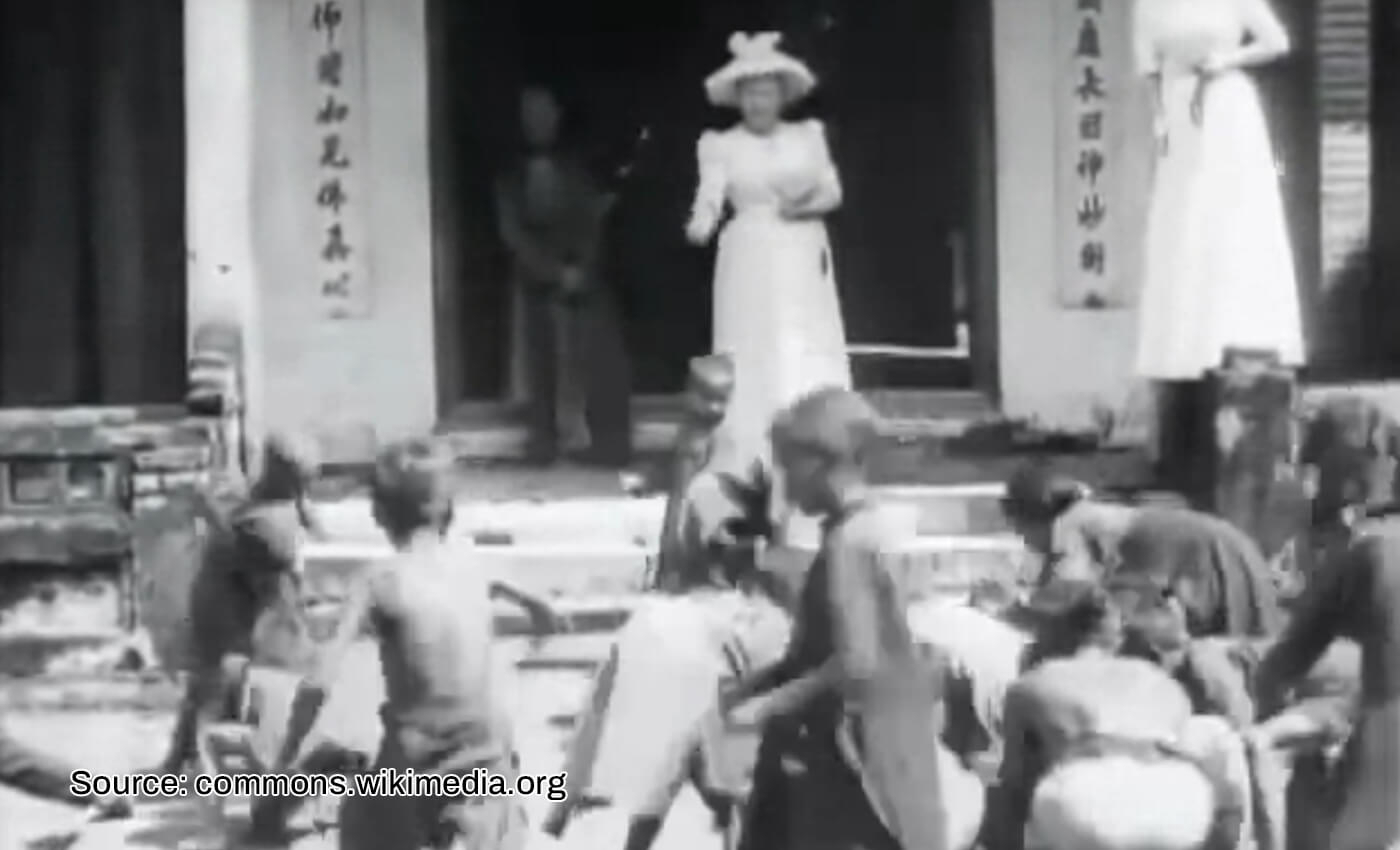 The viral video is not of UK's Queen Elizabeth II. It is a clip from a 1901 black-and-white short film that was shot in Vietnam.

A 14-second video of two women throwing small objects at children is being shared widely on social media to claim that one of the women was United Kingdom’s Queen Elizabeth II, who died last week after serving as the country’s longest-serving monarch, throwing food and money at African kids. The clip shows two ladies wearing white clothes and hats, reminiscent of Victorian clothing, and throwing something at the children, who frantically pick it up off the street. Several people claimed that the late monarch could be seen feeding the children like one feeds chickens, while some claimed that she was throwing coins at them. The video is being shared to state that nobody can expect Africans to mourn the Queen's death because this is the way she treated them. The video is being shared in the backdrop of the 96-year-old’s death on Thursday, September 8, 2022. T

We found that the video does not show Queen Elizabeth II and is indeed a clip from a short film predating even the monarch’s birth.

We found a still from the video on the French website Catalogue Lumière in a short article titled "Annamese children picking up cash in front of the Ladies' Pagoda." According to the article in French, the film was shot by Veyre in French Indochina between April 28, 1899, and March 2, 1900, and premiered on January 20, 1901, in Lyon, France. The writeup further said that the two ladies seen in the clip were the wife and daughter of Paul Doumer. Doumer was a former French President and the Governor-General of French Indochina (modern-day Vietnam) from 1897 to 1902.

The official website of Il Cinema Ritrovato, an annual restored film festival in Italy's Bologna, also carried a shot from the film, identifying it as a film by Veyre shot between 1899 and 1900.

We also came across a screenshot from the clip in an article on the website of The Substation, an Australian art and performance space. The article identified the screenshot as from a 2022 reimagining of Gabriel Veyre's film 'Enfants annamites ramassant des sapèques devant la pagode des dames', which involved a slowed-down version of the original film along with the song 'Feed the Birds', to comment on issues of imperialism, charity, and aid. Taking a cue from this, we searched for Veyre's film and found the complete short film on a YouTube channel called Iconauta. The caption of this video explained that this was a scene filmed by Gabriel Veyre in Annam, Vietnam, then known as French Indochina. The West used the word Annam to refer to Vietnam as a whole and Annamites for the people of the region.

It may be noted that the viral clip is a colorized version of the original black-and-white film. We found a similar version on the YouTube channel Olden Days.

Twenty-one countries of Africa are members of the Commonwealth of Nations, of which the Queen was head. It may be noted that the British monarchy has not enjoyed acceptance among all African people for whom the Queen and her government remained a colonial, imperial power. The British government, of which the Queen was the constitutional head, had historically committed atrocities against people in various African countries under its imperialist goals: in the 1950’ the British authorities killed thousands of Mau Mau rebels for rising against the colonizers, and in 1965 Britain made thousands of inhabitants of Chagos Islands forcefully leave their homeland so that the islands could be used as a military base by the United States.

The viral video does not capture UK’s Queen Elizabeth II personally mistreating African children by throwing food at them. The clip is taken from a short film shot in Vietnam and released in 1901. We have therefore marked this claim false.