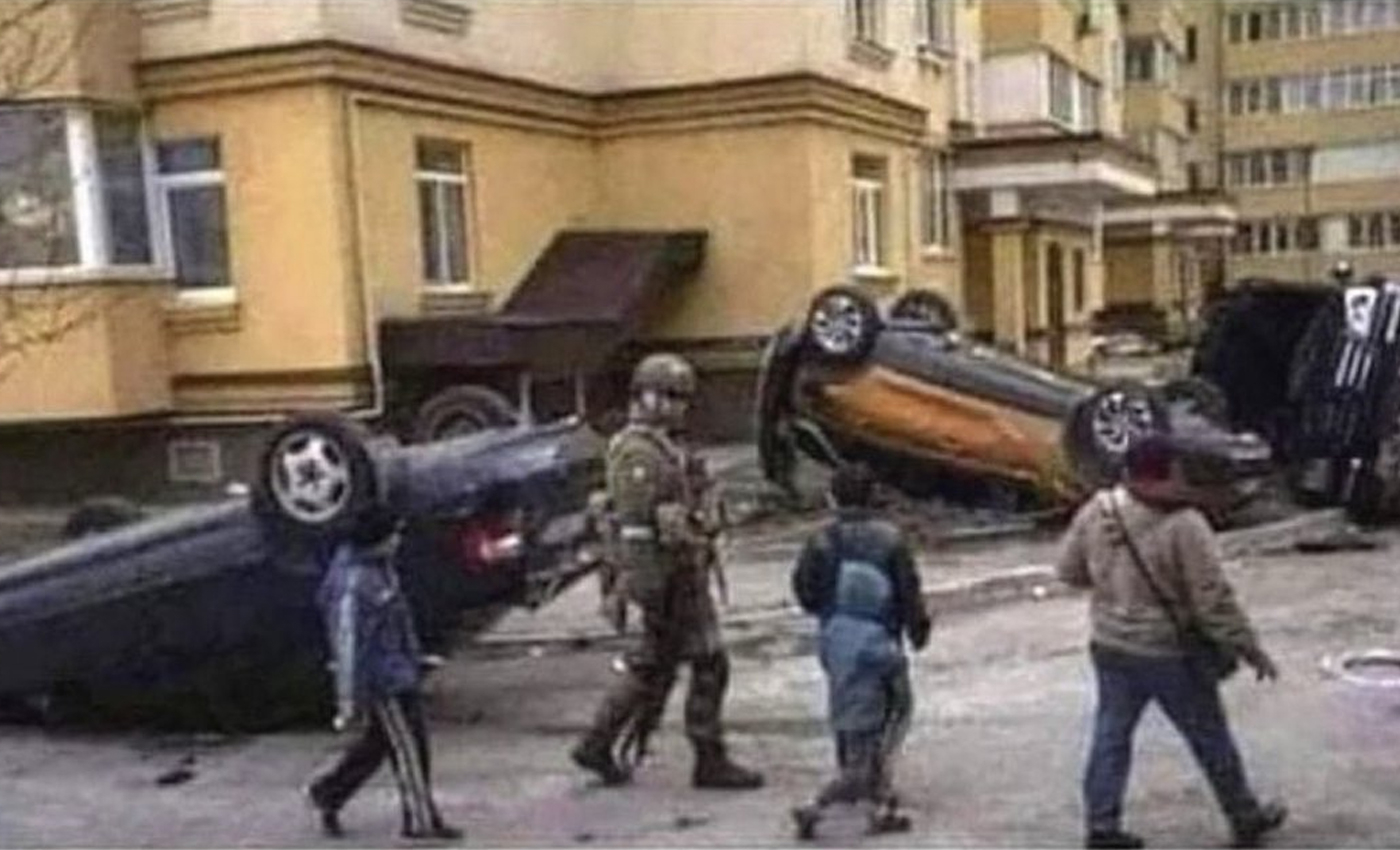 This image shows a neighborhood in Bucha, Ukraine, where numerous people have been found killed, and Russian war crimes have been documented.

Some social media users have raised questions over the authenticity of events around the Russian invasion of Ukraine. The Russian government and social media users have circulated misleading and false reports claiming that the scenes were staged in photos and that the conflict is fake. One such post showed an image of several civilians and a Ukrainian soldier walking past an apartment building and turned-over cars. The caption claims that because the windows of the building remained intact even after warfare that may have flipped and damaged cars, the explosions were fabricated and staged for photographs. However, this claim is inaccurate, and the photo lacks context.

We conducted a reverse image search to find the exact image taken by photographer Rodrigo Abd, published under the Associated Press images dated April 4, 2022. The description read, "A Ukrainian soldier walks with children passing destroyed cars due to the war against Russia, in Bucha on April 4." Abd published additional photos of a similar nature on his Instagram account on April 5, which included the same viral image. One of the photos in the post showed a woman named Tanya Nedashkivs'ka kneeling by a flipped car in front of a building that matches the building from the viral image posted on social media. On April 6, the Ministry of Defense of Ukraine also tweeted the original viral images.

On April 7, 2022, Reuters published an article on the Russian troops' attack in a Bucha neighborhood, publishing remarks from residents of an apartment complex on Vodoprovidna street, Bucha. The article also says that residents took photos and maintained records of the violence enacted by Russian soldiers. Oleksii Tarasevich, a resident, said they found cars flipped over and "mutilated bodies" in the basement and stairs in the residents' parking lot. Further, he showed the image records of Troops parking armored personnel carriers and military trucks in the apartment complex's courtyard. Tetyana (Tanya) Nedashkivskiy told Reuters her husband was taken for questioning, and two weeks after the troops withdrew, he was found dead. One of the images published by Reuters showed the building, which also matches the viral image.

Some concerns have be raised as to the veracity of the images and how it is possible for cars to be severely damaged, with surrounding buildings, specifically windows, and roads left intact. The assumption is that explosions were the cause of the cars destruction.

Greek fact check site Ellenika Hoaxes spoke to an Associated Press photographer and a local resident, both present during the invasion. Both stated that during the occupation, Russian soldiers used tanks to flip cars in order to clear roads for heavy vehicles, create road blocks, prevent civilians from leaving and to hide military operations and equipment. Ellinika Hoaxes provides further documentation of the area in questions, via drone footage and aerial photographs, showing the location of the cars in the image. The timing of these images show that they occurred while Russian forces occupied the neighborhood, not after they left.

On April 8, the Associated Press wrote how Ukraine was left with "crushed buildings, littered streets, destroyed cars" and residents without food and aid. Bucha's Mayor Anatoliy Fedoruk said investigators had found "at least three sites of mass shootings of civilians during the Russian occupation." Fedoruk added that "most victims died from gunshots," and bodies were found with their hands tied and thrown into mass graves, including one at a children's camp.

Now, more than two months into the Russian invasion, eyewitness accounts, independent reporting and government verification have all provided ample evidence of the Russian invasion of Ukraine. International media outlets on the ground in the country have continued to provide verifiable reports of events as they happen, documenting the damage resultant from the conflict. Reporting shows that though missiles have caused much destruction in targeted cities, some buildings and areas remain intact. Many viral images and videos incorrectly stating that the invasion of Ukraine is staged have been debunked by the BBC, Logically and the Associated Press, among other publications. Russia has an incentive to downplay or deny war crimes, and Russian politicians and state media have claimed multiple times without evidence that the war isn't real, or that people in images of the devastation are actors, or that Ukrainian soldiers attacked their own citizens. These claims are false. There is overwhelming evidence of the Russian invasion of Ukraine.

Update 4/5/2022 to clarify that the cars were likely flipped due to Russian tanks, rather than the result of bombings or explosions.