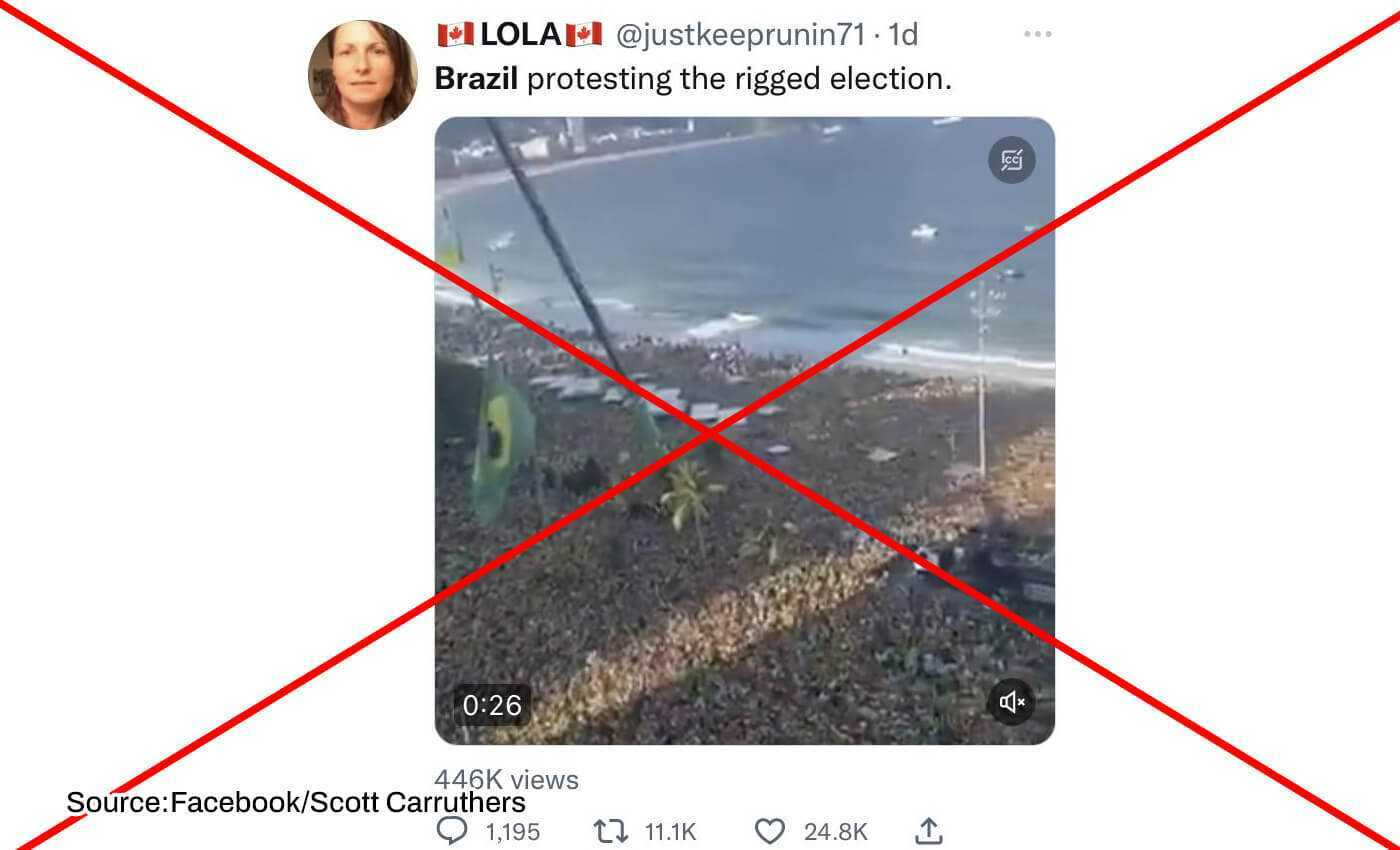 The photo shows an Independence Day celebration held at Brazil's Copacabana beach in September, weeks before the result of the election was declared.

On October 30, 2022, leftist leader Luiz Inacio Lula da Silva was elected as the president of Brazil for the third time after beating incumbent President Jair Bolsonaro in the second round of the country's presidential polls. According to media reports, following Bolsonaro's election loss, tens of thousands of his supporters have staged protests, blocking the main highways and rallying in front of military installations in Brazil's major cities. Amid this, several people have been sharing images and videos claiming to show a massive demonstration held in support of the right-wing leader. A screenshot of one such video posted on Twitter was shared on Facebook. The screengrab of the tweet shows a massive crowd wearing t-shirts in the colors of Brazil's flag gathered on a beach. The caption of the Facebook post reads: "Brazil protesting the rigged election."

We traced the original post on Twitter and found that a user had commented on the tweeted video, alleging that the video was from an Independence Day celebration in Brazil.

Taking a cue from this, we searched Twitter with keywords in Portuguese and came across the same video shared by a user called Allan Silva on September 12, 2022. Silva also claimed that the captured event occurred on September 7 (Brazil's Independence Day) at Copacabana beach.

On extending our search, we came across a slightly more zoomed-in video of the same event taken from a different angle. The video was posted on September 9, 2022, by Twitter user Steve Hanke, a professor at Johns Hopkins University. The same beach, boats in the sea, buildings on the coast etc can be seen in this video. Hanke's caption stated that the scene showed Brazilians gathering on Copacabana beach in support of Bolsonaro during the 200th-anniversary celebration of Brazil's independence. His source for the video, linked in his tweet, was Fabia Faria, Brazilian Minister for Communications, who had posted the clip on September 8.

A search for related news reports then led us to a YouTube video capturing the same scenes. The video was uploaded by The Associated Press (AP) on September 13, 2022. The video caption read, "Bolsonaro turns bicentennial into campaign rally." This video showed a massive crowd gathered near the beach. Just like in the viral image, people wearing green and yellow t-shirts were waving the Brazilian flag. The caption of this video added that the Independence Day celebrations were being held at Copacabana beach, and the crowd comprised many supporters of President Bolsonaro.

Other news outlets also published similar footage and pictures of the Independence Day celebration in Brazil's Rio de Janeiro, which doubled as a rally for President Bolsonaro. A report by The Guardian from September 8, 2022, carried a photo of the same scene, reporting that thousands of Bolsonaro supporters thronged the sands of Copacabana on September 7.

The above-mentioned tweets and media reports prove that the Facebook image and the video circulating online do not show a demonstration by Brazilians to protest the elections.

The final results of the two-phase election were declared on November 6, following which claims were spread on social media that the election had been "rigged." However, such claims have not been proven. In a report published on November 10, the defense ministry of Brazil said it found no evidence of voter fraud.

The image being circulated online has been lifted from a video shot during the bicentennial celebrations of Brazil's independence in Rio de Janeiro. The celebration took place in early September, well before the election results were declared while campaigning for the polls was still underway. Though it is true that Bolsonaro supporters have been protesting the result of the election, the photo in question does not show one such protest. Therefore, we have marked this claim false.

Brazilian police stopped Jair Bolsonaro's son from leaving the country after the ex-president tried to overturn the democratic elections.