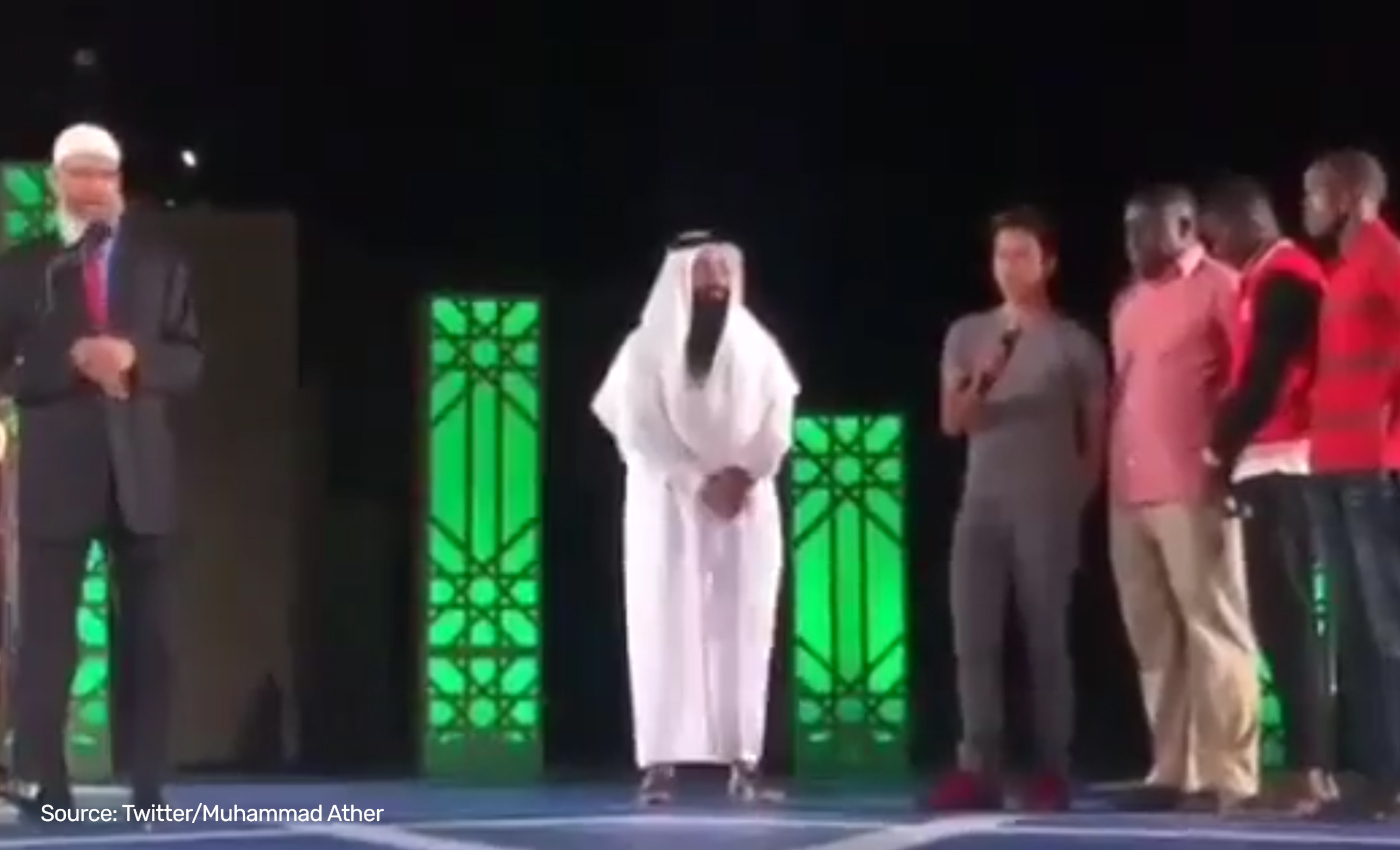 A six-year-old video of Zakir Naik converting people to Islam has been falsely linked to his alleged presence at Qatar's 2022 FIFA World Cup.

The FIFA World Cup 2022, which kicked off in Qatar on November 20, is the first-ever World Cup held in the Middle East. Ahead of the fixtures, scheduled until December 18, Reports started surfacing that Qatar invited Indian fugitive Zakir Naik for the inaugural ceremony, and he was scheduled to deliver religious lectures throughout the tournament. Following this, a video circulating on social media speculates that four people have already embraced Islam with Zakir Naik at World Cup, with the caption reading, "04 people taking Shahada at the hands of Dr. Zakir Naik in FIFA World Cup 2022 in Qatar. And Allah's Deen is the dominant and shall remain so!." Shahada is an Islamic oath and creed which reads, "I bear witness that there is no god but God, and I bear witness that Muhammad is the messenger of God." The video shows four people converting to Islam after Naik recites Shahada: "I bear witness that there is no God but Allah, and Prophet Muhammad is the messenger and servant of Allah, Mashallah we go, Muslim." Naik can later be seen hugging the converts in a traditional Islamic greeting.

However, the video is old and unrelated to the ongoing FIFA world cup. Recent reports on November 23, Hindustan Times clarified that no official invitation was sent to Naik from Qatar. It notes, "Although Qatar authorities said that Zakir Naik could be on a private visit to Doha but till now there has been no positive sighting of the Islamist."

On conducting a reverse image search, we found that the video was from 2016, when Naik delivered a lecture titled "Does God Exist?" at the Public Foundation for the Cultural Village of Katara in Qatar. The same viral video was shared on YouTube channel "abdelghani boudra" on May 27, 2016. The translated caption reads, "4 people converted to Islam immediately after the end of Zakir Naik's lecture at Katara." The same video was posted on Facebook by the Aljazeera Mubasher channel on May 27, 2016.

An article by Al Sharq, an Arabic pro-government daily newspaper published in Qatar, also reported on the event. It noted that on May 26, 2016, a lecture by Naik started at 8 p.m., lasting until 2 a.m. the following day, with the conversion of eight people to Islam. It adds that the lecture was attended by 13,000 people, including a group of sheiks, representatives of charities, media professionals, and many high-ranking personalities. It is clear that the video is old and has been falsely linked to Naik's presence at the FIFA World Cup 2022 in Qatar.

News 18 reports that Naik's presence at the World Cup has been widely criticized, largely due to charges of money laundering and hate speech in India, citing an article by Mint. News 18 also notes India banned his Islamic Research Foundation in "2016 after he was accused of encouraging and aiding its followers to 'promote enmity and hatred." Naik later migrated to Malaysia, later obtaining permanent residency status. The country has ruled out deporting Naik unless he breaks Malaysian laws. Naik was also banned from entering the U.K., according to a BBC News report in 2010.

An old and unrelated video has been widely shared to falsely claim that Zakir Naik has converted four people to Islam at the FIFA World Cup 2022. There are no reports of such conversions. Therefore, we have marked the claims as false.