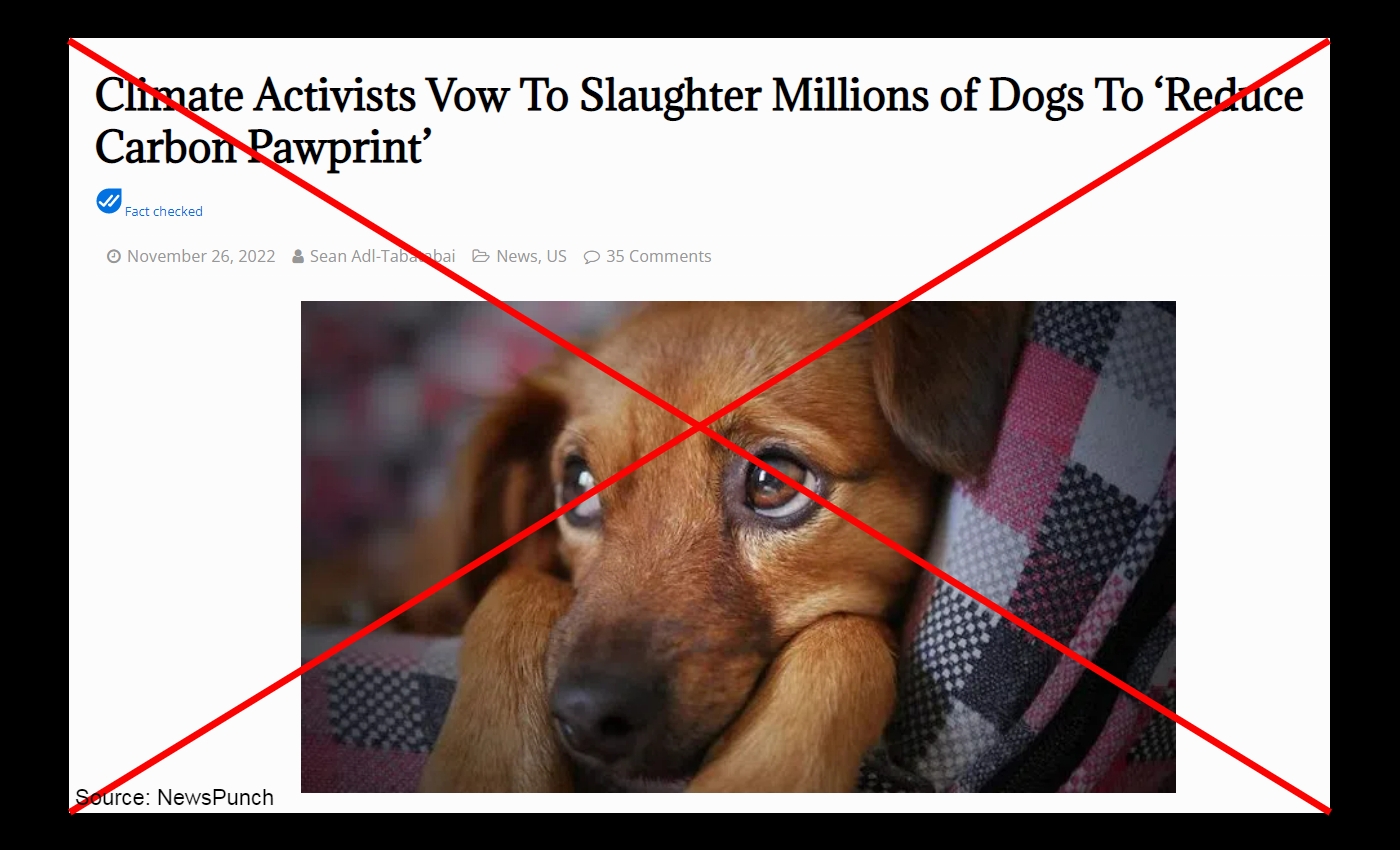 No, the WEF has not called for an initiative to kill pets to fight climate change.

On December 9, 2022, the disinformation website Newspunch transcribed a video originally published on the alt-tech platform Rumble by user "The People's Voice" that claims the World Economic Forum (WEF) has called for cats and dogs to be slaughtered in a new initiative to reduce the "carbon pawprint" because of the amount of meat pets consume. The article continues to claim that the mainstream media is pushing this narrative, alleging that CNN has claimed that, like humans, pets will eat bugs in the future. It also claims that CNN suggests you trade your pet for one with "less environmental impact," such as a turtle or a lizard. The video also states that Bloomberg has urged pet owners to let their pets die to fight inflation and that actor Emma Thompson suggested that pet owners eat their pets to survive the "so-called climate crisis." The video offers no sources apart from articles written by Newspunch and an alleged tweet by the WEF.

The claim has gone viral on Twitter with 20,000 retweets and has been shared on TikTok and Facebook. The published video on Rumble has half a million views at the time of writing.

The supposed WEF tweet reads, "Eliminating pet ownership will reduce dangerous carbon pawprint that contributes to climate change." However, the tweet is fake; no links are provided to the original tweet, only a screenshot. Moreover, the screenshot does not include the date or time of publication, an indication that the tweet is fake. Research by Logically found that no Twitter users sharing the claim have posted the supposed original tweet from the WEF, only Newspunch articles or tweets on the subject. Logically has screened the official WEF Twitter account and internet archive Waybackmachine for keywords in the alleged tweet from December 1 through December 12. We have not found any indication that the tweet in question – or indeed a similar one – has been published. Faking a tweet is a simple process, with several fake tweet generators a mere Google search away.

Regarding the other three claims made by Newspunch, The CNN articles discuss how people can be more environmentally friendly as pet owners; it does not propose getting rid of them. It does not claim that pets will eat bugs like humans in the future, but that it is a possibility for dogs because they are omnivorous, and bugs are a potential substitute for dogs with allergies. The article notes that cats are obligate carnivores, so could not eat bugs. Reptiles are exemplified as pets with a low carbon footprint, but the article does not suggest you trade in your larger pet for a smaller one.

The Bloomberg article does not suggest that families kill their pets to fight inflation, only to think twice about expensive costly medical needs. Instead, the article discusses how low-income people can fare better during the current period of high inflation, providing examples to help keep a tighter budget, from food to gas prices. The example taken out of context is that of not giving your pet chemotherapy, since it is both expensive and because the ethics around the side effects of chemotherapy does not have a scientific consensus. The author admits that it is a harsh suggestion, and at no point does the article say families should kill their pets.

The video claims that actor Emma Thompson suggested that pet owners eat their pets to survive the climate crisis. The quote in question has been misconstrued, and hails from a mock weather forecast outside the BBC during an Extinction Rebellion protest in London. Thompson said that "Climate crisis trends show an increased chance of warmer, wetter winters and hotter, dryer summers, along with an increase of frequency and intensity of extremes." She continued, "better wrap up warm, stockpile food, and remember there is a surprising amount of protein in the average household pet." As such, Thompson did not urge pet owners to eat their pets. She made a stark warning that this could be the future if climate change is not resolved, pointing the blame at passive policymakers.

Since the video aired and gained significant traction, other fact-checking experts have rebutted the claims. Snopes describes Newspunch as a "widely discredited” website, decrying the article and subsequent tweet as "clickbait." Similarly, PolitiFact states that the "headline originated on a site known for sharing misinformation and the associated story cites an article that does not support its claim."

The screenshot of the supposed WEF tweet is fake, and the claims referencing various articles and people are false. Therefore, we have marked this claim as false.

The WEF has suggested that people bathe 'once a week or less to save the planet.'