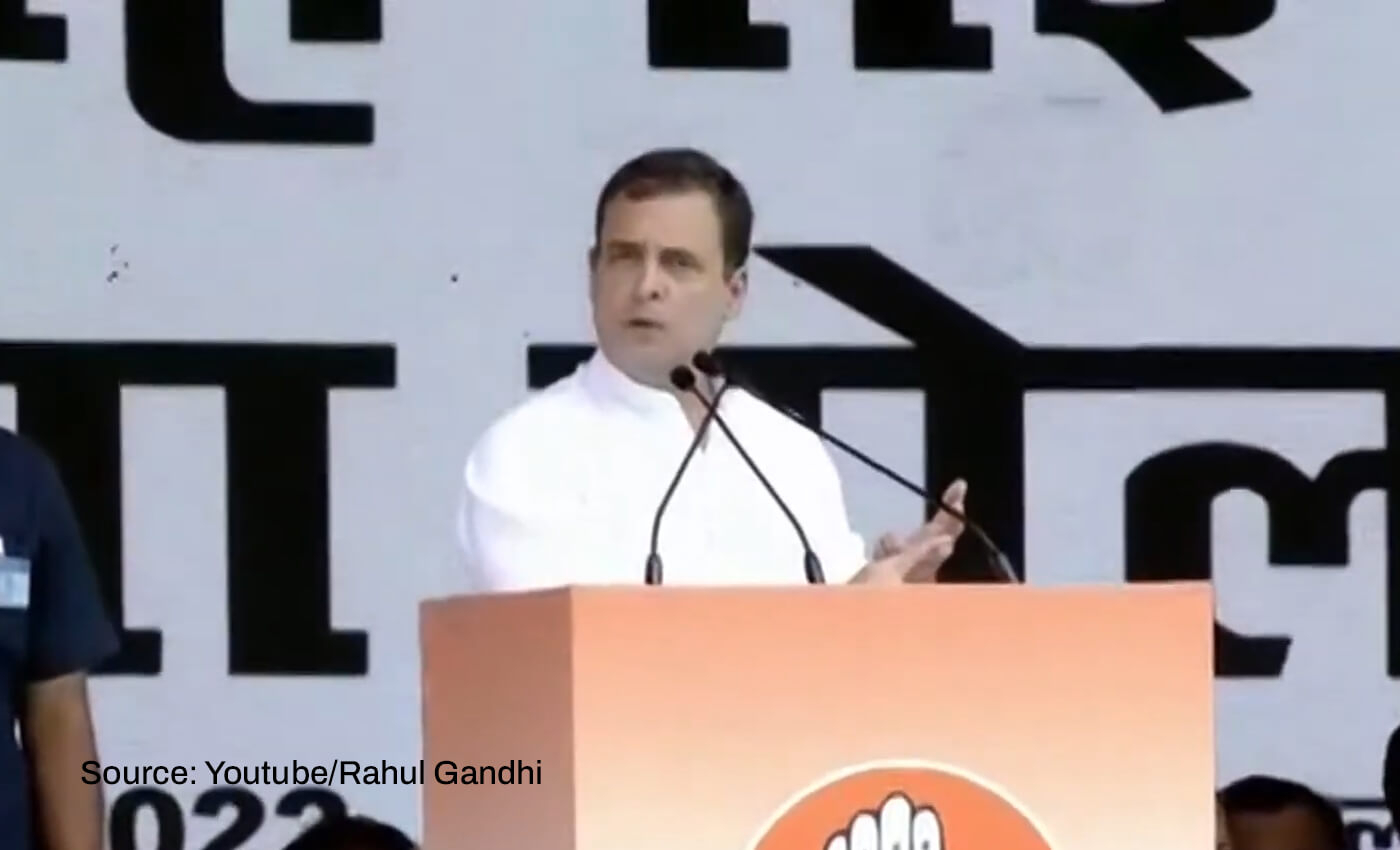 Rahul Gandhi promptly corrected himself after using the wrong unit of measuring flour. An edited clip is being shared.

The "Mehngai par Halla bol" (raise your voice against rising prices) rally was organized by the opposition party, the Indian National Congress (INC), at Delhi's Ramlila Maidan on September 4, 2022, calling out the central government led by Bharatiya Janata Party (BJP) on inflation rates. A video of Congress leader Rahul Gandhi addressing the rally is viral on Facebook and Twitter. In the video, we can hear him comparing current prices of essential goods to prices from 2014. "Atta (flour) was 22 rupees per liter, but today it is 40 rupees per liter", Gandhi said. The caption reads, "Atta is measured in liters?!". While some posts read, "since when is atta is being sold in liters?".

The viral video is incomplete and is a shorter version of Rahul Gandhi's speech. Through appropriate keywords, we found a livestream of the entire speech uploaded on Gandhi's official YouTube channel. In the video, he can be seen listing out the current commodity prices compared to prices before 2014, before the BJP came to power at the center. Most of the essential goods that he compared had units in liters, which resulted in him misrepresenting the unit of flour while calling out its price. Gandhi promptly corrected himself, but the video in circulation does not show the part where he rectified his mistake. A video of the same speech shared by ANI news on Twitter also shows that he corrected himself by saying kilograms after the mistake of calling out flour prices in liters.

A trimmed-down version of his speech is being shared to spread the narrative that he is uninformed or incompetent to be leading a national political party. Many such unwarranted claims and trimmed-down videos of him have been shared in the past as part of a campaign to mislead the masses.

Previously, Logically has debunked claims where Rahul Gandhi was quoted as referring to the Rajasthan tailor Kanhaiya Lal's killers as "kids" and "children."

A Time of India report notes that retail inflation rates in India have "eased in July to 6.71 percent from 7.75 percent in June due to moderation in food prices." It adds that the rates stayed high above the Reserve Bank of India's (RBI) tolerance limit of four to six percent for the past seven months. It quotes Dharmakirti Joshi, Chief Economist, who said, "nonfood inflation rose to 6.7 percent from 6.5 percent. Even as falling petrol and diesel prices eased transport and communication consumer price index, prices for other energy commodities such as liquified petroleum gas and kerosene increased."

Rahul Gandhi indeed made a mistake while calling flour prices in units of liters but immediately corrected himself; this part is edited out in the viral video. Hence, we have marked this claim as misleading.