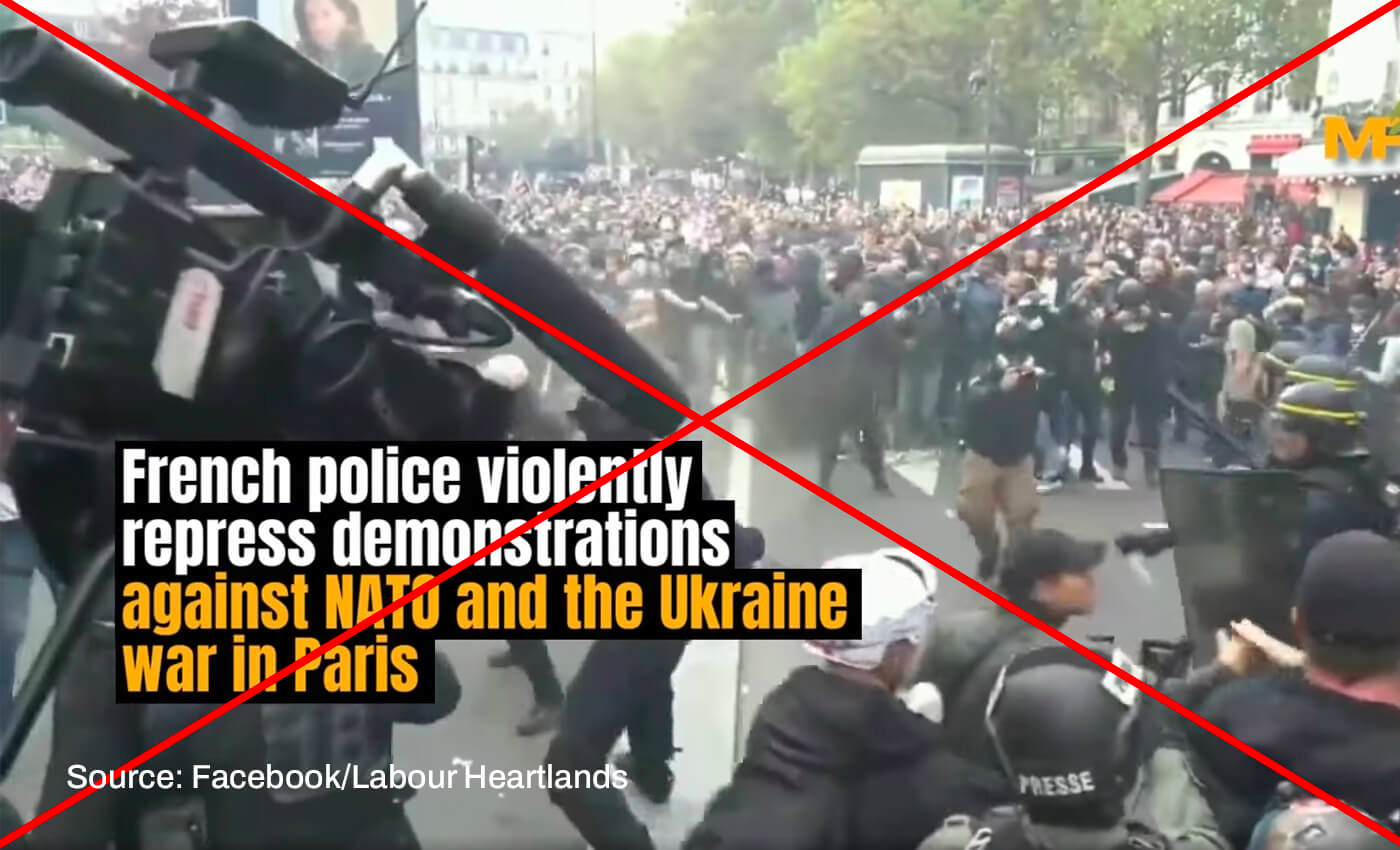 The October 16 protest held in Paris was about rising living costs and global warming. It was not against NATO or the Russia-Ukraine war.

A video of French police violently repressing demonstrations that took place in Paris, France, is circulating on social media with the context that is against the North Atlantic Treaty Organization (NATO) and the Russia-Ukraine war. A Facebook post shared the protest video with the caption, "French police are violently suppressing demonstrations against NATO and the war in Ukraine in Paris," It is also shared on Twitter and Instagram. However, this protest had nothing to do with NATO or the war in Ukraine.

Through reverse image search, we found the same video on the official Facebook page of Press TV Français, posted on October 17, 2022, with the caption in French, "France: Police use tear gas to disperse a march against high prices and climate inaction in Paris". At the two minute 33 second mark in the video, we can see the map board for Bastille on the Faubourg Saint-Antoine street near the Place de la Nation circle, which we confirmed by cross-checking on Google Maps Steet View. The Associated Press also uploaded videos of the same clash to YouTube, filmed from a different point of view on October 22, 2022. At the beginning of the video, one of the protest banners read 'March against Expensive Life' in French.

On conducting a keyword search, we found the march's official website called 'marche16octobre'. The website noted that it is being held "against the expensive life and lack of a climate policy". In addition, the organizers are calling for higher wages, a freeze on energy prices, a tax on super profits, and retirement at the age of 60. Nowhere on the website is it noted that the protest was directed against NATO, as claimed in the Facebook post.

According to the article published on October 16, 2022, by the French news website Le Parisien, a protester said, "Climate inaction for all these years is starting to weigh and have serious consequences." The police used tear gas during the protests. Le Figaro, another France news outlet, noted that thousands of demonstrators rushed into the Faubourg Saint-Antoine street in the Bastille's direction after a departure at 2 pm. Politician Jean-Luc Mélenchon and writer Annie Ernaux lead the procession.﻿

Logically has previously debunked false claims and fake news stories focusing on themes such as claims of Ukrainian and NATO aggression that were spread by mainly pro-Russian accounts after Moscow launched its full-scale invasion on February 24. Some disinformation has promoted anti-refugee sentiment, intending to weaken international support for Ukraine. In the current landscape of public opinion on the Russia-Ukraine conflict, it is not uncommon for the parties stirring up chaos to disseminate fake news.

The protest march held in Paris intended to draw more attention to the rising cost of living, climate emergency, and pensions. The protest was not directed against NATO or the Russia-Ukraine war. Hence we have marked this claim as false.

Video showing crisis actors in Ukraine prove the war is a hoax.