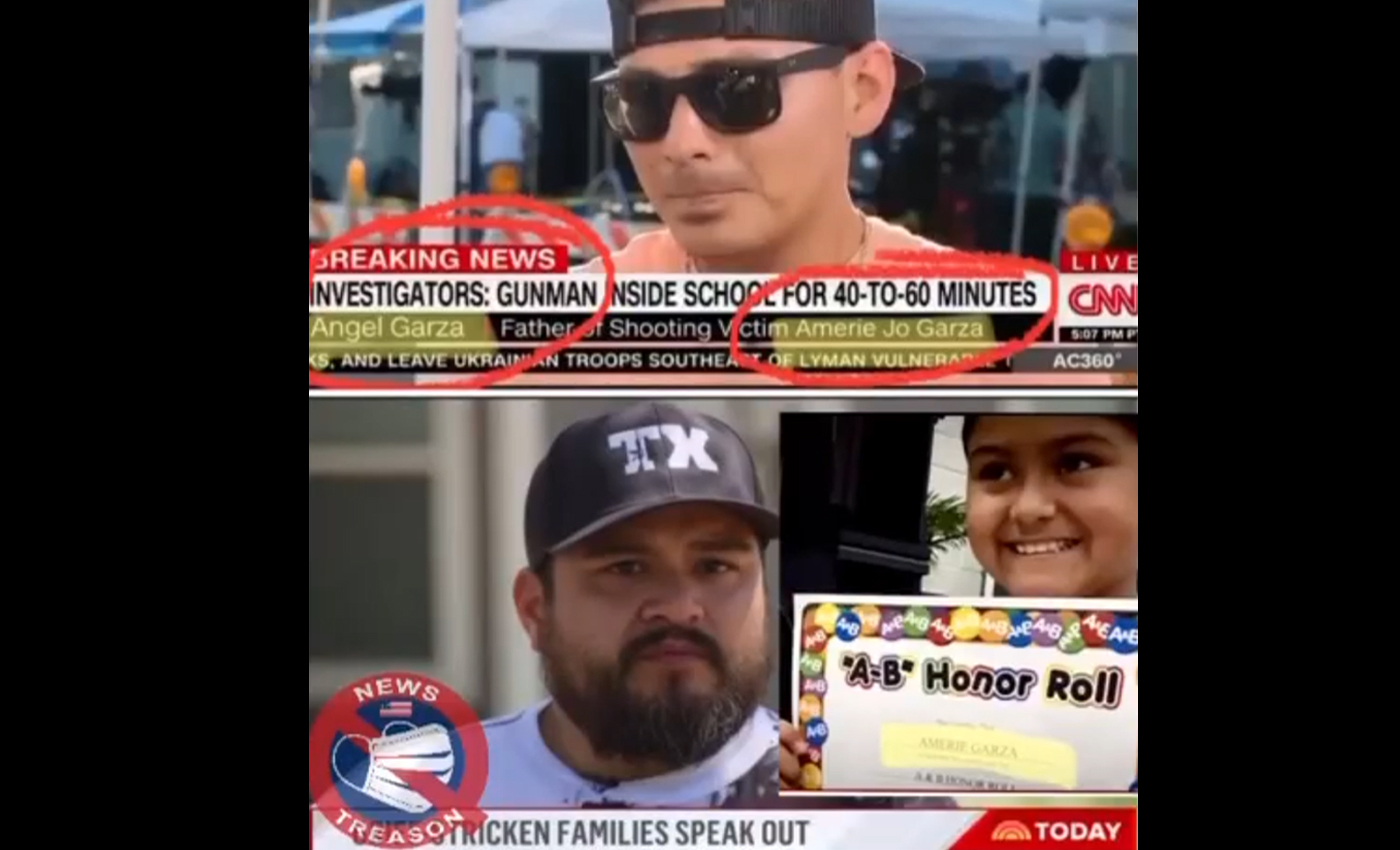 Both men who appear in TV interviews are identified as the victim's parents. One is her biological father, and the other is her stepfather.

Context: After two teachers and 19 children were killed in the mass shooting at the Robb Elementary School in Uvalde, Texas, on May 24, 2022, conspiracy theories and false allegations have been circulating on social media platforms. Recently, a video circulating online shows a CNN clip that identifies a man named Angel Garza as the father of 10-year-old Amerie Jo Garza. The video then shows an interview conducted by NBC News with a man who is also identified as Amerie's father, named Alfred Garza III. The post claims that the men are crisis actors and that the mass shooting was staged. However, the two men are not actors, nor do these clips prove that the shooting was staged. In fact: An official obituary published online by Hillcrest Memorial Funeral Home, located in Uvalde, names Angel Garza as Amerie Jo Garza's stepfather, while Alfred Garza III is listed as her biological father. Two video clips accompany the online content spreading this misinformation. One is a fragment of an interview by NBC News with Alfred Garza III, who speaks of the deceased minor as his daughter. The second is an interview with Ángel Garza by CNN, in which he holds a photo of the same minor and introduces himself as her father. Both men who appear in television interviews are identified as the parents of Amerie Jo Garza. On June 3, stepfather Angel Garza told ABC News that his daughter had just turned ten on May 10. Garza met with U.S. Marshals the night of the shooting, who informed him that his daughter had been killed. The New York Times quoted Amerie's father, Alfred Garza III, who said in a brief phone interview that "she did not talk a lot about school but liked spending time with her friends at lunch, in the playground, and during recess. She was very social." Other media outlets, such as CBS News, also clarified that Angel Garza is the victim's stepfather and Alfred Garza III is her biological father. Texas Governor Greg Abbott released a statement on the declaration of the Uvalde shooting disaster. He stated that the mass shooting at the Robb Elementary School had caused widespread and severe damage, injury, and loss of life in Uvalde County, Texas. Verdict: Conspiracy theorists have taken two different news channels' interviews with the fathers of the victim to claim that it was evidence the mass shooting was staged. The mass shooting has been reported widely by credible media with evidence-backed details, thus we mark this claim as false.

Office of the Texas Governor