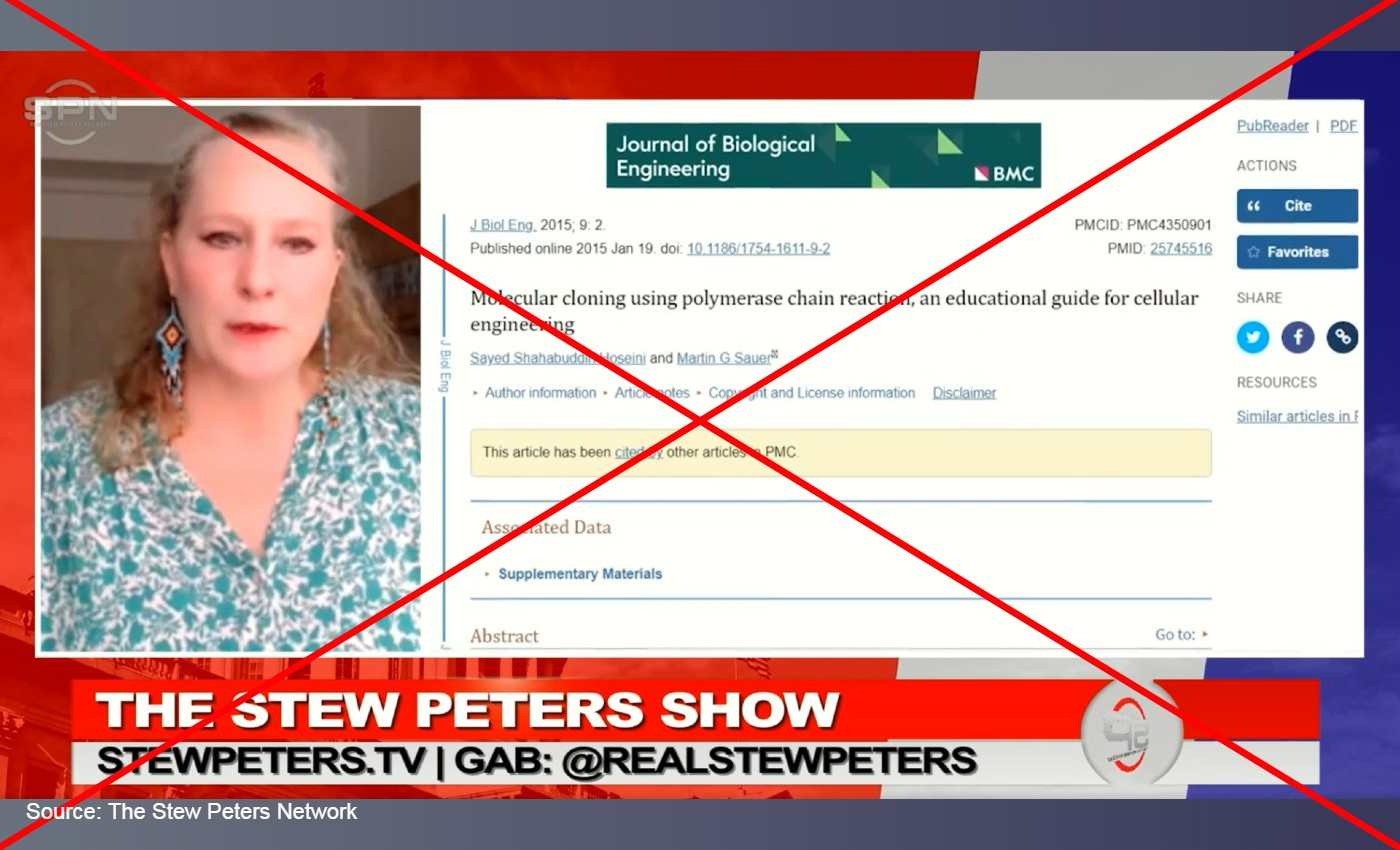 Samples collected for PCR tests to check for the presence of the SARS-CoV-2 virus cannot be used for reproductive cloning.

A video from The Stew Peters Show about Polymerase Chain Reaction tests, popularly known as PCR tests, has been shared on Facebook, claiming that COVID-19 PCR tests "are actually not tests at all" but are rather "linked with human cloning technology." Conspiracy theorist Stew Peters talks to one Dr. Ariyana Love, who refers to a study in the U.S. National Institutes of Health (NIH) library, titled "Molecular cloning using polymerase chain reaction, an educational guide for cellular engineering." She claims that NIH admitted to attempting to "genetically modify humans" by turning people into "hybridized humans with insect DNA."

Stew Peters is an American conspiracy media personality who has spread several misleading and false claims about COVID-19 and vaccines. He recently produced the anti-vax pseudoscience documentary "Died Suddenly." Dr. Ariyana Love has also made several false assertions in the past. She claims to be a naturopathic doctor but Logically could not find her credentials or details of her education in the field of medicine on any reliable websites.

The study mentioned in the video, accessible in the NIH library, was initially published in the Journal of Biological Engineering in January 2015. A note on the background of the study says, "It is the aim of this methodology paper to provide a comprehensive protocol with a viable example for applying PCR in gene cloning." The paper does not refer to reproductive cloning, contrary to what Peters and "Dr." Love imply in the video.

According to the National Human Genome Research Institute's (NHGRI) factsheet on cloning, the term describes several different processes that can be used to produce genetically identical copies of a biological entity. There are three different types of artificial cloning: gene cloning, reproductive cloning, and therapeutic cloning. Gene cloning produces copies of genes or segments of DNA, which is the most common type of cloning done by researchers at NHGRI. Reproductive cloning produces copies of whole animals. NHGRI has explicitly said its researchers had not cloned any mammals and that it does not clone humans. Therapeutic cloning produces embryonic stem cells for experiments to create tissues to replace injured or diseased tissues. There is no solid scientific evidence that anyone has cloned human embryos, let alone human-insect hybrids.

According to MedlinePlus—a web service of the National Library of Medicine (NLM), which is part of NIH— genome editing or gene editing refers to "a group of technologies that allow scientists to change an organism's DNA." The technology, which according to the claims made in the video, is used to "genetically modify humans,” allows genetic material to be added, removed, or altered at particular locations in the genome. Far from being used to "modify humans,” genome editing is currently being used in cells and animal models in research labs to understand ailments like single-gene disorders. As genome editing brings up many ethical challenges, including whether it would be permissible to use this technology to enhance standard human traits, embryo genome editing, and, by extension, human reproductive cloning is banned in most scientifically advanced countries.

MedlinePlus also states that a PCR test for diagnosing COVID-19 is conducted by taking a sample through a nasopharyngeal swab. The nasopharynx is the uppermost part of one's nose and throat. The sample from the swab will contain human DNA and possibly the DNA of the pathogen ( in this case, the SARS-CoV-2 virus). An enzyme called polymerase is added, which causes the sample to produce copies. The copying process is repeated multiple times to get billions of copies in about an hour. As the coronavirus (SARS-CoV-2) is made up of RNA rather than DNA, the RNA must be changed into DNA before copying. This process is called reverse transcription PCR (RTPCR). The only risks of using a nasopharyngeal swab are that it may be uncomfortable for the patient and cause coughing or gagging. However, these effects are temporary. According to New England Biolabs, PCR cloning is "a rapid method for cloning genes and is often used for projects that require higher throughput than traditional cloning methods can accommodate. It allows for the cloning of DNA fragments that are not available in large amounts."

In the video, Dr. Ariyana Love claims that humans would be "modified" using green fluorescent proteins found in fireflies. According to Health Feedback—a website dedicated to fact-checking health and medical media reports— luciferase is an enzyme that catalyzes the transformation of luciferin into light. It is this enzyme that is responsible for producing light in fireflies and other organisms including some species of squids, jellyfish, and bacteria. While luciferase is a standard tool in scientific research to monitor biological processes and was used in developing and evaluating COVID-19 vaccines, it is not an ingredient in them. Logically has previously debunked misleading claims about the safety of COVID-19 vaccines and their ingredients.

Samples collected for PCR tests cannot be used for reproductive cloning. There is no evidence of human genome editing involving successful attempts at human-insect or any other human-animal hybrids. Currently, most human gene editing research is about studying and curing certain diseases. Therefore, we mark this claim false.

Center for Genetics and Society