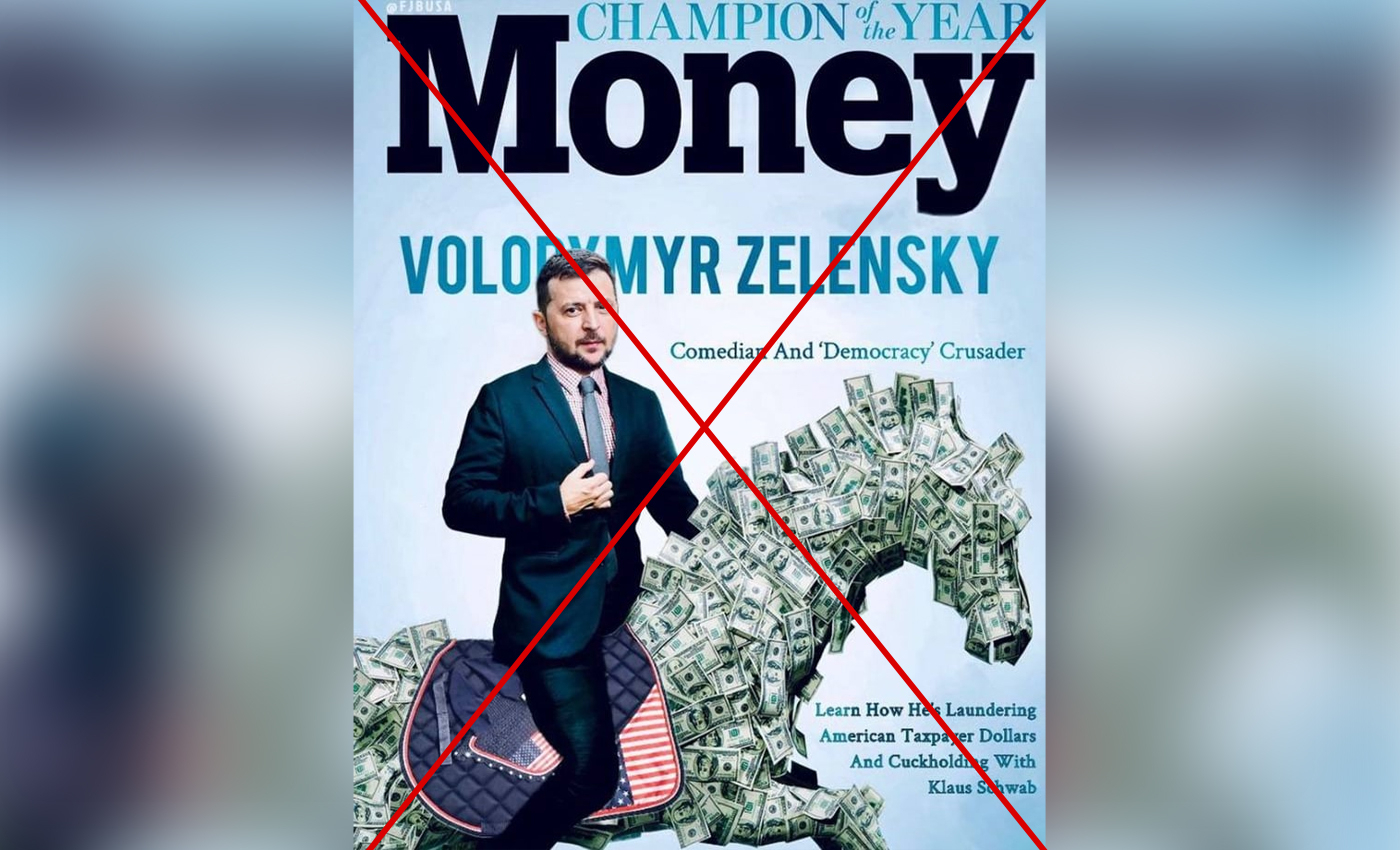 The Money magazine cover showing Ukraine President Volodymyr Zelenskyy is a doctored version of a John Oliver-featured cover from 2016.

Since Russia invaded Ukraine, misinformation and false claims regarding the conflict and leaders, Vladimir Putin and Volodymyr Zelenskyy, have circulated on social media. One such post purported to depict the recent cover of "Money," an American magazine, which showed Ukraine's president, Zelenskyy, riding a horse made of dollar bills. According to the posts, the publication dubbed Zelenskyy "the king of western corruption" and accused him of laundering taxpayer money. The magazine, however, did not publish such a cover page.

Using a reverse image search, we found that the image in the post is an edited version of Money magazine's John Oliver-centered December 2016 edition. The publication's official site contains the original 2016 cover. The cover lines say ''Comedian and Consumer Crusader" and "12 other People, Products and Ideas That are Changing Your Finances for the Better." We also found the original magazine cover with no cover titles through a Twitter advanced search. The tweet reads, "John Oliver is the 2016 MONEY Champion."

Money magazine's official website has all archived copies of previous covers. When checking for another version of the 2016 December cover featuring Zelenskyy, none matched the one shared online. Further, when we closely checked the purported Zelenskyy-featured cover, the issue's release month stated on the top left corner of the magazine's cover was missing. A watermark of "@fjbusa" was apparent.

Through a keyword search, we found that ''fjbusa'' is an Instagram account that shared the Zelenskyy featured image in June 2022. This account lists memes, news, and comedy as its genres. However, contrary to what was said in the Facebook posts, the original post on Instagram did not suggest that it was a cover released by Money.

The altered covers sub-heading says of Zelenskyy, "Learn How He's Laundering American Taxpayer Dollars And Cuckholding [sic] With Klaus Schwab." This is a reference to the antisemitic Great Reset conspiracy theory that centers on a cabal of powerful elites such as Klaus Schwab and George Soros and their plan to reset the global economy and impose socialist authoritarianism over societies around the world. Money magazine is not known to publish references to well-known conspiracies. It appears that an edited picture that originated from a page labeled as "satire/parody" was reposted by several online users.

Reuters also checked this claim, and a Money spokesperson acknowledged to Reuters that the Zelenskyy cover had never been published. Previously, an alleged Time magazine graphic from March 2022 that compared Russian President Putin to Adolf Hitler went viral earlier this year and was debunked by Logically. Our fact-check revealed that the viral picture was the artwork of graphic designer Patrick Mulder and not the Time magazine cover.

Money Magazine did not issue a cover depicting Zelenskyy riding a horse made of dollar bills or calling him the king of western corruption. The picture is a doctored version of a 2016 cover. Therefore, we have marked this claim as false.