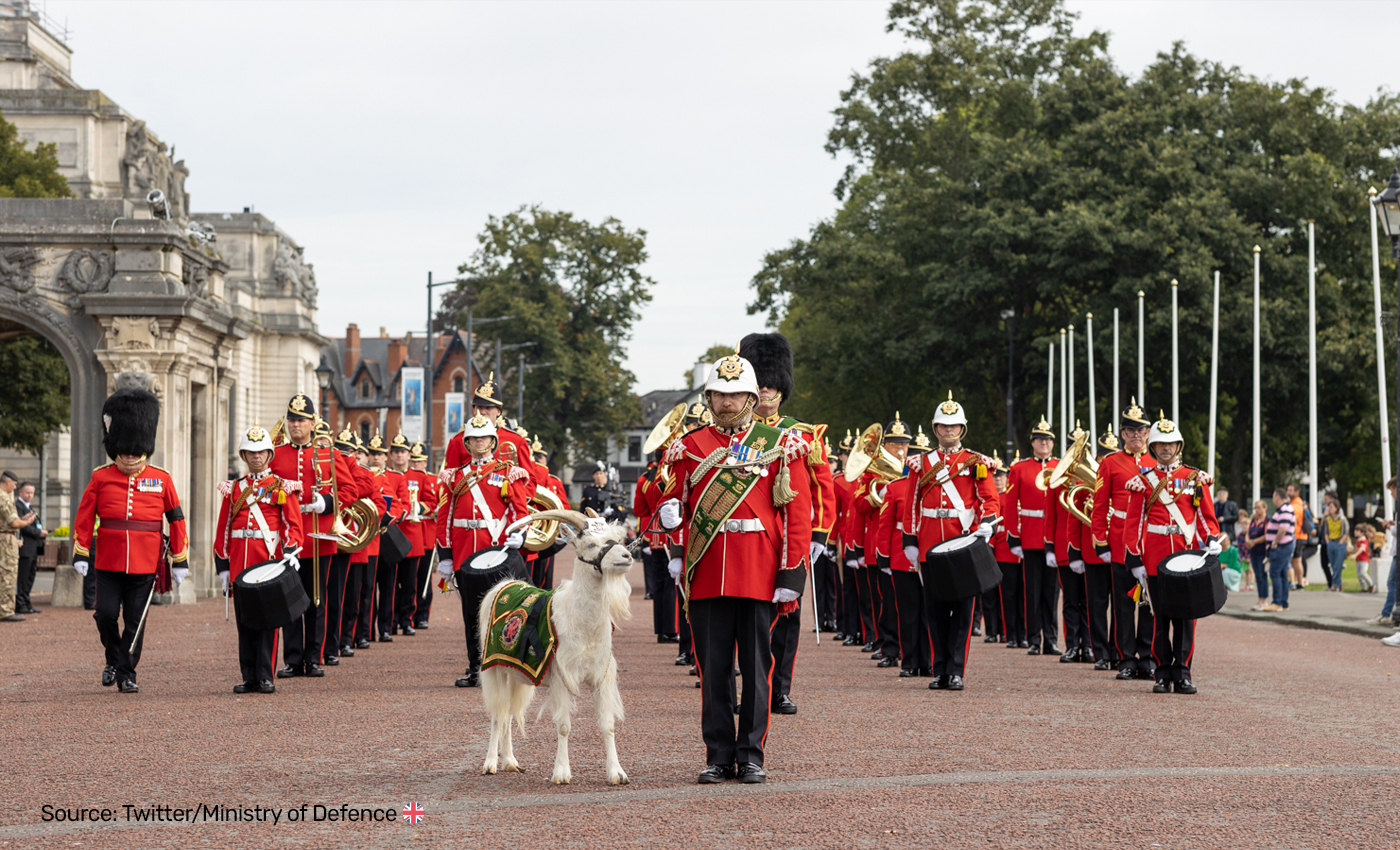 The goat is a mascot for the Royal Welsh regiment. It was part of the procession on King Charles' proclamation day and is not part of Satanic rituals.

Queen Elizabeth II died on September 8, 2022, after reigning for over 70 years. Following this, there has been a surge in posts on social media related to the Royal Family. One such Facebook post shared an image of a U.K. military unit marching with a goat, with a collaged picture of Baphomet at the corner of the image. The caption within the image reads, "Did you all wonder why there was a goat leading the way at the Queen's funeral procession? The symbol to pay homage to their God! Everything is as clear as the sun shining in the sky for those who have eyes to see and ears to hear." Other elements of the cpation state, "deceased Queen Elizabeth represents the queen of this world" and "these people are the true children of devil, descendants of Cain the offspring of the old serpent," who control the world. "This is the reason goat leads the deceased queen funeral procession to their god devil, satan, old serpent and lucifer." The caption also refers to the image of Baphomet, saying it is the God of the Illuminati and Freemasons. The picture of the goat is claimed to be a "ritual procession." However, there is no proof that the Royals performed any satanic ritual at the Queen's funeral and sacrificed a goat.

We found the image was from King Charles III's proclamation day on September 11, 2022, and not from the Queen's funeral. The U.K. Ministry of Defence tweeted photos of the proclamation on September 11, 2022, captioning it, "The UK Armed Forces have supported the proclamations of His Majesty The King in Scotland, Cardiff and Belfast today. The Armed Forces are proud of their service to the monarch and their involvement in this momentous occasion in British history." One of the images from the tweet matched the viral image, showing the Royal Welsh Band with the goat. On September 11, 2022, the Independent shared the procession video, which shows the Royal Welsh regiment "led through the streets of Cardiff by the Goat Major as the Welsh capital proclaimed King Charles III." Further, the report said thousands watched the procession and witnessed the proclamation ceremony.

The U.K. National Army Museum states, "the Royal Welsh, and their predecessor units, have adopted goats as mascots since the 1770s." Since the 18th century, the army regiments have "kept animals as mascots to work with them, bring luck and strengthen morale." Further, "they are treated like any other soldier and share the dangers and camaraderie of army life." They have both official and unofficial mascots. Official mascots also have a "regimental number and rank." Unlike human soldiers, "they can even be promoted and demoted."

The Royal Welsh Museum says the antecedent regiments typically use the traditional names of Dewi, Taffy, Shenkin, and Sospan for their mascots. Further, "the most recent recruit is Fusilier Shenkin IV of the 3rd Battalion who is a Kashmir goat and was selected from the royal herd on the Great Orme Country Park in 2018."

According to Encyclopedia Britannica, Baphomet is a "deity that the Templars were accused of worshipping" and "later embraced by various occult and mystical writers." These deities are placed at Satanic temples. In 2015, BBC News published an article on "decoding the symbols on Satan's statue." In the article, we can see the statue of Baphomet that is similar to one in the collage, known as Levi's Baphomet. The "modern image of Baphomet was drawn in 1856 by the French occultist Eliphas Levi in his book Transcendental Magic: Its Doctrine and Ritual." Levi has explained all the parts of his drawing with an explanation. The "two fingers on the right-hand point up, and two on the left-hand point down, meaning as above, so below." The BBC noted that this gesture and words are familiar to occultists and were popular during the "Renaissance and Reformation." The phrase is also used with science, the universe, and God, but Levi writes, "by making the gesture, his Baphomet "expresses the perfect harmony of mercy with justice."

There are many well-known conspiracy theories based on Satanism, and Logically has previously published various articles debunking misinformation around it. Satanic rituals may involve devil worship, human or animal sacrifice, or cannibalism. However, the Royal Family has never been proven to have practiced Satanism or any Satanic rituals.

The U.K. Army regiments have animals for mascots. People have falsely connected mascots to Satanic rituals, so we have marked this claim as false.