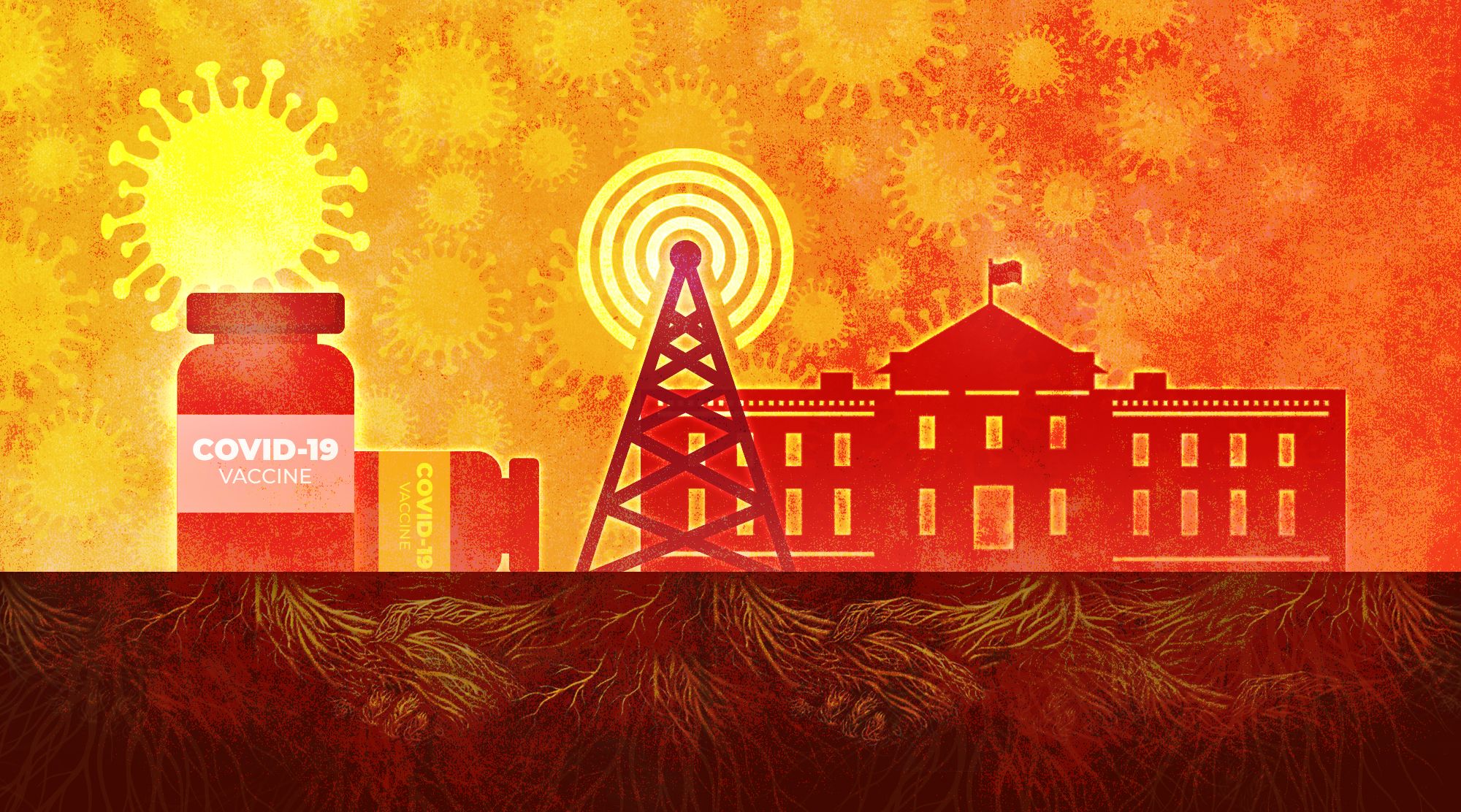 After a flurry of uncertainty in the face of a global pandemic, scientists and researchers have worked tirelessly to understand how we have ended up where we are today. As a result of this, the current state of misinformation around the coronavirus pandemic appears to have settled into two distinct realms.

On the top, there are the claimed cures or treatments for the virus that emerge from a friend-of-a-friend’s mother on WhatsApp (or the President of the USA) and conflicting state narratives over the virus origin. Underneath, however, there is a bewildering, roiling mass of fake pandemics, New World Orders, and microchip vaccines that sometimes spill over in dangerous ways, such as the recent string of 5G mast arsons in the UK, QAnon-fuelled anti-lockdown protests in the US, and David Icke’s return to prominence as a vocal anti-authoritarian and figurehead of disinformation.

A cursory look at this side of coronavirus misinformation reveals a tangled web of fantastic narratives that draw together conspiracy groups as diverse as QAnon, Anti-Vaxxers, Christian doomsdayers, and Complementary and Alternative Medicine (CAM) groups – all united under the banner that we are not being told what is really going on. But how do such distinct groups find each other and compare notes on what They are up to?

The answer may lie in a sociological theory suggested in 1972. In The Cult, the Cultic Milieu and Secularization, Professor Colin Campbell suggests that bubbling under accepted culture resides the “cultic milieu”, a collective cognitive space that “all deviant belief systems” call home – from the beliefs of alien abductees and flat-earthers to ‘deep-state’ hating gun-toters and crystal-clutching Gaia lovers. The cultic milieu cares little for political alignment or how grounded your belief system is; if it exists outside the norm, it is welcome here. The cultic milieu, Campbell argues, is indicative of a healthy society – an underground region where true-seekers test hidden, forgotten, and forbidden knowledge.

Importantly, allegiances between the inhabitants of the milieu are as fluid as the communication channels that sprawl within it; a flat distribution of actors and loose communities with the larger milieu acting in opposition to dominant culture. This lack of overarching institutionalized orthodoxy means actors can “travel rapidly through a variety of movements and beliefs”  - enabling them to bridge what appear to be distinct and wildly different discourses and practices. According to scholars Egil Asprem and Asbjørn Dyrendal:

Political, spiritual, and (pseudo)scientific discourses all have a home here, and they easily mix. Joined by a common opposition to ‘Establishment’ discourses rather than by positively shared doctrinal content, conspiracy theory affords a common language binding the discourses together.

The cultic milieu is how the extremely pro-Trump types who have been following QAnon breadcrumbs and online hippies concerned with 5G interfering with their natural vibrations can find common ground listening to a David Icke livestream that unites deep-state, 5G, and anti-vaccine fears under the coronavirus hoax banner. It is a “shared suspicion of ‘orthodoxies’ - whether religious, scientific, or political”  that enables elements of these attitudes, communities, and discourses to mix freely and flow with compatibility to one another.

When Facebook and YouTube removed Icke’s account, it was taken as a sign that they were on the right track as the “establishment” were cracking down on the ‘truth’. London Real, who have hosted a series of livestream interviews with Icke, use these platform crackdowns as a sign of legitimacy, claiming on their site that their latest interview is “The Broadcast They Don’t Want You To See… The Ideas They Don’t Want You To Hear…”. Mirrors, re-uploads, comments sections, and file sharing all ensure that these narratives remain accessible as those who believe them become more attuned to attempts to stem disinformation – and each deletion by Facebook, Twitter, or YouTube only ensure vindication in the minds of those who think They are trying to control the Coronavirus story with ulterior motives in mind.

A cognitive study by Browne, Thomson, and Rockloff shows that “CAM endorsement and vaccination scepticism are components of a common attitudinal stance, with some shared psychosocial determinant”; this attitude being “a tendency to reject the status-quo, in the form of advice from perceived establishment authorities; in the form of scientists, medical professionals, government or pharmaceutical companies [...] In extreme cases, this may take the form of conspiracy ideation”.

This openness to other discourses in the cultic milieu is further corroborated in a 2018 study by Joshua Hart and Molly Graether, who found that personal factors such as “schizotypy, a personality trait comprising suspiciousness and social anxiety, and odd or eccentric ideas, perceptions, and behaviors, was most strongly related to conspiracy belief”. In addition to this, “[b]elief that the world is a dangerous place came in a close second, followed by bullshit receptivity (proneness to perceive profundity in meaningless information)”.

As Annie Duke of The Fast Company notes, it is scientifically proven that we believe “all sorts of things based just on what we hear out in the world but haven’t researched for ourselves”. This, plus a receptiveness to conspiracies or other discourses that reside within the cultic milieu once they open themselves to one belief system, means that once someone is ‘red-pilled’ into the ‘harder’ and more paranoid conspiracies around Coronavirus, 5G, and microchipped vaccines, it is very hard to bring them around. Every thread deletion is a suppression of the truth and every counter-argument is merely parroted propaganda.

This social and psychological priming of those who engage in one narrative within the cultic milieu to engage in, or be more receptive to other narratives is a site of exploitation by profiteers who feed belief in the world being a dangerous place and offer expensive products to mitigate said perceived danger or ask for donations to ensure ‘the truth’ gets out. Articles published by sites such as Natural News act as a nexus between nearly every belief system assigned to the cultic milieu; exposing people to other conspiracy narratives, often escalating a sense of threat to people open to believing them. It should come as no surprise that Natural News also runs a vast webstore selling everything from dubious supplements and ‘health’ foods to $300 electronic magnetic field readers (essential for ghosthunting) and full survival kits “for you and your family”. London Real, on the other hand, have raised over $1million for a “digital freedom platform” for future livestream events that have been “banned by the Silicon Valley technology giants” (despite having that capability on their website already).

However, more pressing than the clear exploitation of uncertainty and fear for profit are the real consequences when the fear stoked online by these woven knots of conspiracy narratives unravel into the real world. Different communities and narratives united by coronavirus have ramped up powerful negative emotions to turn a fast unscrupulous buck resulting in 5G masts on fire and lockdown-shirking protests that block emergency services because of a belief that we are in the midst of a ‘plandemic’. Professor Campbell’s assertion that the existence of the cultic milieu is the sign of a healthy society may be true, but its existence alongside the mainstream is undeniably fraught when public health is at stake.

Communities of Color Are Fighting Back Against Online Vaccine Misinfo

A month ago, I finally got my second dose of the Oxford AstraZeneca vaccine. As a health professional who has been deployed to the frontline since the start of the pandemic, this not only offered some hope to break the endless cycle of loss and...