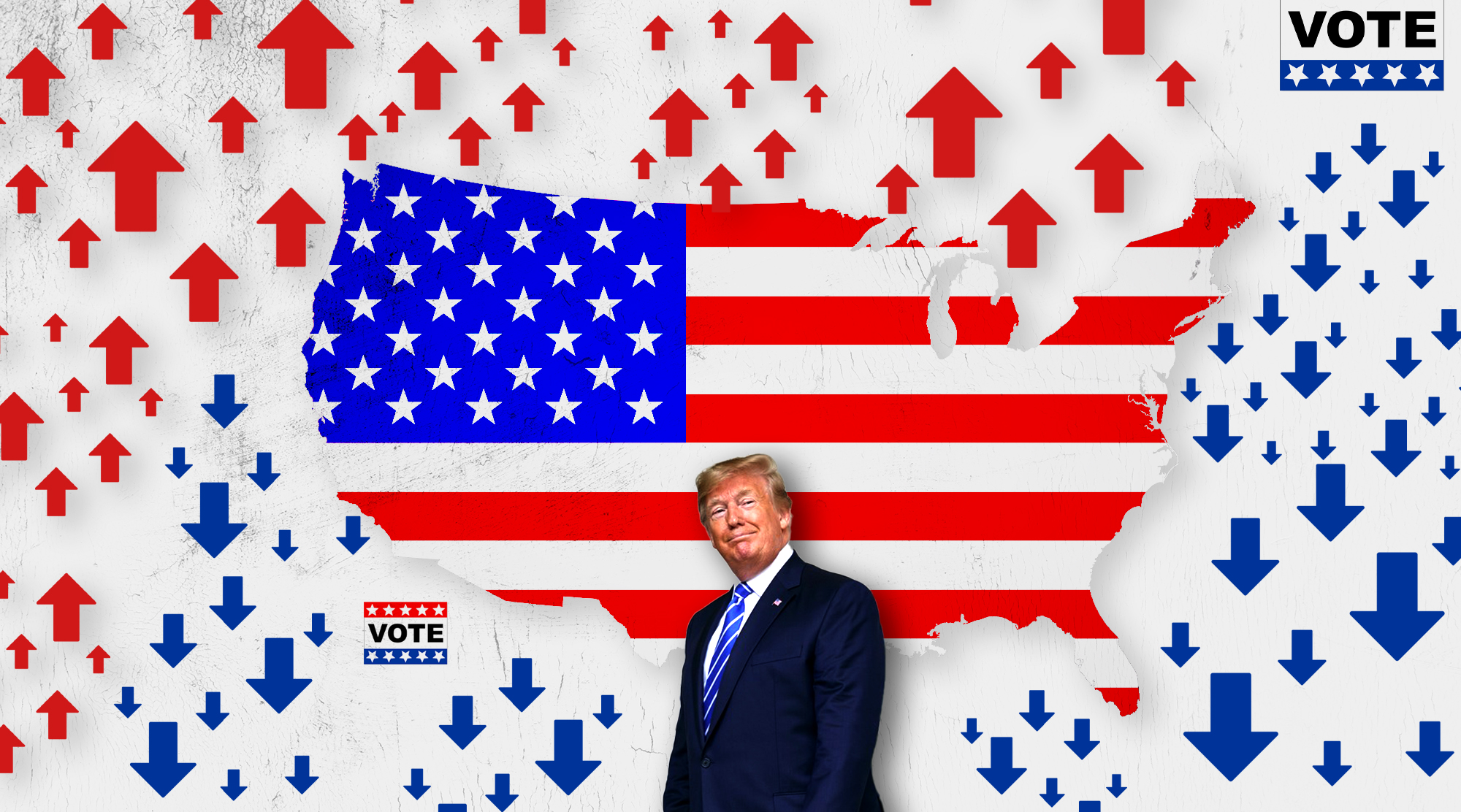 There’s a medium sized account on Twitter, currently hovering around 35.3k followers, with the handle @PollWatch2020. The account was created in December 2019, and chugged along steadily with about 300 mentions a day for several months, until on August 30th of this year, they tweeted this:


1). BREAKING: Democracy Institute shows Trump up nationally and in battlegrounds:

The president quote-tweeted the post, adding: “Moving along nicely. MAGA!” and instantly the account’s interactions exploded, shooting up to 106,380 mentions in a day. The account has also been retweeted by prominent conservative commentators, including Candace Owens, Larry Schweikart and Kurt Schlichter, and counts the TV presenter Jesse Watters among its followers. Watters himself has a follower count of a massive 1.3 million. But how did a small account, posting mainly familiar Trump campaign lines, arrive at the fingers of the president himself? And what does it tell us about how Trump and others in his orbit are spinning his - generally disappointing - poll numbers?

The answer, as is often the case when it comes to the 45th president, is by telling Trump what he wants to hear. The account posts snapshots of polls, rather than complete readings, pulling out figures that look favourable to Trump. Echoing his assessment of which news sources are “fake” and which not, for the last few months, Trump has been keen to downplay the veracity of any polls that show him struggling with the electorate ahead of November’s elections. The president has repeatedly called findings by mainstream polling institutions “Fake Suppression Polls,” and reassured his supporters that “I’ve been getting really good polls”.

Sorry to inform the Do Nothing Democrats, but I am getting VERY GOOD internal Polling Numbers. Just like 2016, the @nytimes Polls are Fake! The @FoxNews Polls are a JOKE! Do you think they will apologize to me & their subscribers AGAIN when I WIN? People want LAW, ORDER & SAFETY!

I’ve been getting really good polls, some over 50%, except for one Fake Poll done by @ABC NEWS, which gives NO INFORMATION about the sample, R or D, or anything else. They did this last Election, with one week to go, down 12 points, and I won. They are disgusting Fake News!

The Trump Campaign has more ENTHUSIASM, according to many, than any campaign in the history of our great Country - Even more than 2016. Biden has NONE! The Silent Majority will speak on NOVEMBER THIRD!!! Fake Suppression Polls & Fake News will not save the Radical Left.

But in reality, good results for Trump have been few and far between. Aggregated approval ratings suggest that more voters disapprove of his performance than approve of it, and as for electoral intention, at the time of publication polling averages show Trump trailing his opponent Joe Biden by 50.7% to 42.9%. As a result, using poll findings to create the impression that the wheels haven’t come off the Trump campaign requires some fancy footwork, and the PollWatch2020 account seems to have volunteered to put on the tap shoes and dance.

A closer look at the poll results the account leans on to formulate its tweets reveals some significant biases. The Democracy Institute poll, the one which netted PollWatch2020 that precious Trump retweet, was run in conjunction with the UK’s Daily Express, a right wing tabloid. The Democracy Institute itself is run by Patrick Basham, an adjunct scholar at the influential libertarian think tank The Cato Institute. FiveThirtyEight’s influential pollster ratings don’t even list The DI among the nearly five hundred pollsters which it ranks for reliability and methodological soundness. As for the partnership with the Daily Express, although it is common for polling companies to conduct their studies in conjunction with a media outlet, usually resulting in the results being published as a big splash, such polls are, in the best cases, accompanied by a link to the full dataset. The Express article on the DI’s August poll ends with a methodological note, but the full data is not given. The DI’s website does have a starkly partisan commentary from its founder on the poll’s findings, but no further elaboration on methodology; DI is not a recognised polling institution, and does not act like a respectable one.

Remember it’s this poll, and Trump’s subsequent retweet, that launched PollWatch2020 from a mostly ignored account to a much bigger player. Aside from the fuss about that poll in particular, the account’s strategy also includes cherry picking individual results from more mainstream polls, giving positive impressions that contradict the broader conclusions.

For example, on August 31st PollWatch2020 tweeted the following:

"For the first time since he’s taken office, Trump’s job approval rating is approaching a majority, at 49% approval and 47% disapproval. This is a jump of four points since July. . ."https://t.co/4scVk7JK3O

Taken at face value, this appears positive for Trump, but following the link to the polling conclusions shows that the bigger picture has Biden out in front at 49% to Trump’s 47%. Polling companies only tend to measure approval for sitting presidents rather than candidates, so the rise in the approval figure benefits from a lack of a comparison.

Presidential approval on September 2 of respective re-election years according to Rasmussen Reports:

Rasmussen is a legitimate polling institution, but hardly represents the gold standard (receiving an underwhelming C+ grade from FiveThirtyEight); however, the big problem with PollWatch2020 is not the quality of the polls they refer to, it’s their habit of pointing to individual polls as decisive evidence of anything at all. All polls come with a margin of error, and any poll can be an outlier; honest brokers talk about polls in aggregate, individual polls are, more often than not, only valuable for the headlines, and not the insight, which they generate.

The PollWatch2020 account is also inconsistent in its choices to post links to the full dataset alongside its polling snapshots, sometimes it’s present, sometimes buried in a separate thread, other times not there at all or only provided when another user asks. This inconsistency aids the account’s viral potential, as users retweet and share information that they perceive to be positive for the president’s reelection chances, and the fact that the data doesn’t fully support their inferences is immaterial. It’s not always necessary to sever the inferences from the data though, as Twitter users are famously apt to share things that support their existing beliefs without following the link to attached information.

If you want to see how good or bad a pollster is just go to Real Clear Politics and check their past predictions. Don't go to 538. Their ratings are purely political and usually upside down from reality.

PollWatch2020, then, may not be moved by our appeals to FiveThirtyEight’s rankings (even though all their data is open, and their methodology transparent). However, their instruction to look at Real Clear Politics as an alternate guide is also an indication of their poor judgement, or bad faith. Real Clear Politics do keep a useful record of past predictions, but while past performance is clearly a key indicator for the reliability of a pollster, it is not the only relevant factor. Even a stopped clock is right twice a day, and without a systematic analysis of pollster reliability and methodology, raw data on past predictions are next to useless in assessing pollster quality.

That early follow for the FiveThirtyEight founder is a clue that perhaps whoever is running PollWatch2020 hopes to style themselves as something of a right wing Nate Silver, aggregating polls and discussing their predictions with followers and commentators. Where Silver has cultivated a reputation for sophisticated polling analysis and (mostly) accurate predictions, the PollWatch2020 account claims to be interested in accuracy but clearly runs closer to using polling for the purposes of propaganda. Whether Trump’s professed confidence in his pre-election polling figures is bravado or genuine, PollWatch2020 is proof that there are certainly people out there who are interested in propping up his belief that he’s coming out on top.

Yesterday, the Democratic party held the first night of their virtual convention. Logically was on hand to live fact check the event and monitor social media activity, which turned up one extremely interesting trend, and...