Why Does Sherri Tenpenny Still Have A Platform? 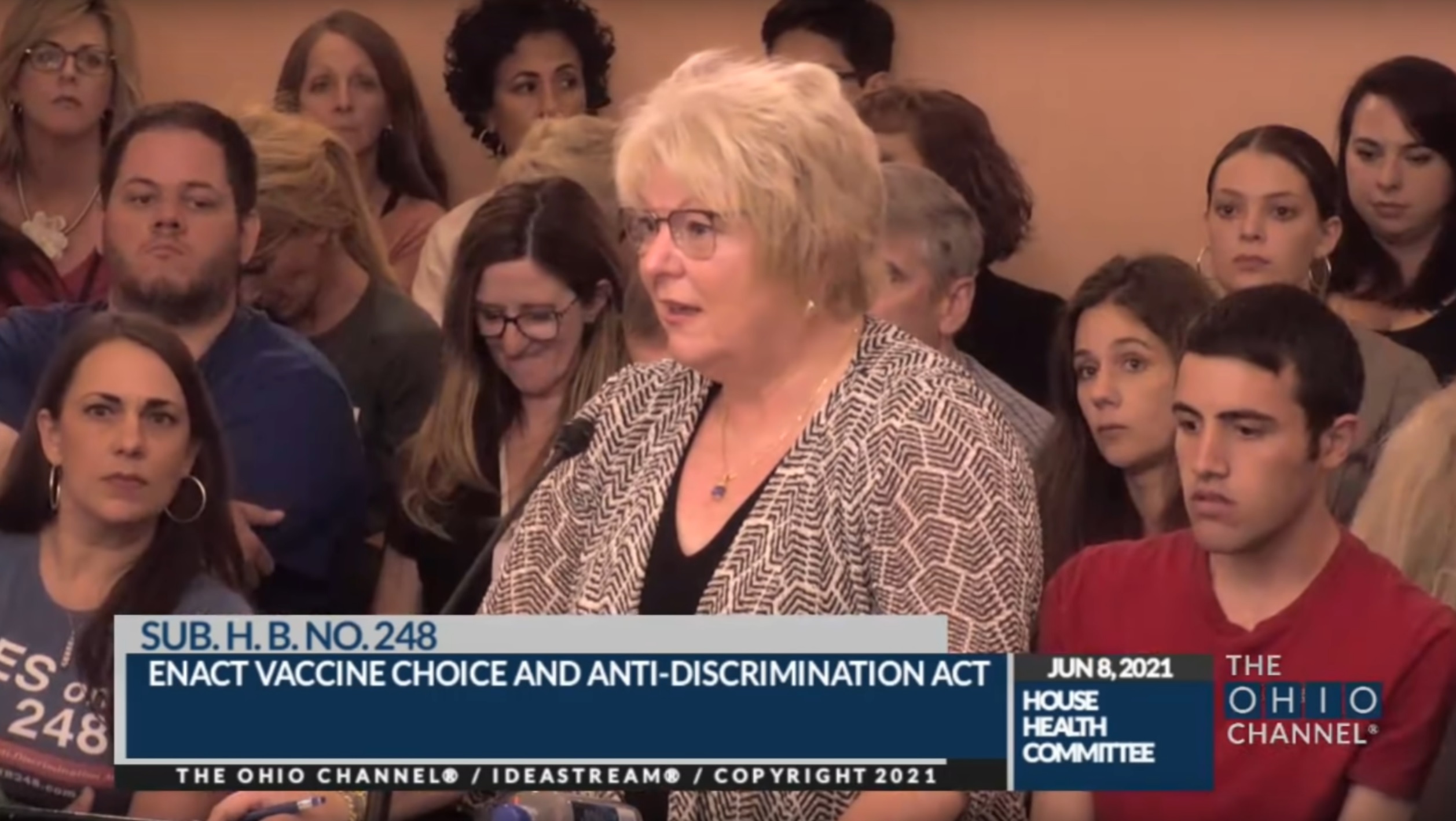 Anti-vax influencer Sherri Tenpenny made headlines last week when she appeared at the Ohio House of Representatives at a hearing for HB 248, and she testified that the COVID vaccine causes blood clots the size of eggs, infertility, 5G bloodborne downloads, menopause, arrested adolescence, stroke-by-osmosis to anyone standing nearby, magnetism, and death.

Tenpenny is one of 12 influencers responsible for 65 percent of the misinformation on the largest social media platforms.

This is despite two reports from the Center for Countering Digital Hate (CCDH), a U.K./U.S.-based civil society group tracking COVID misinformation online, that found that Tenpenny is one of 12 influencers responsible for 65 percent of the misinformation on the largest social media platforms.

HB 248 is an anti-vaxxer’s dream. Among other things, the Enact Vaccine Choice and Anti-Discrimination Act would prevent schools and businesses from requiring people to get vaccinated or wear masks. The bill’s sponsor, Rep. Jennifer Gross, invited Tenpenny to attend. In her pinned Facebook post introducing the bill, Gross describes herself as a “pro-vaccine nurse practitioner” who values “informed consent and freedom from forced medical decisions.”

It is not clear where Gross first encountered Tenpenny, but it seems likely that their paths crossed on social media. In February, Gross shared a link to a compilation of videos, including videos from Tenpenny and Taylor Renz, both of whom testified in the Ohio House last week. There is no mention of anti-vax or COVID-based misinformation before the February post.

In a post from slightly earlier in February, Gross’s status read: “Parler is back up!” A University of Kansas study – which was published in the journal Vaccines – surveyed a sample of posts on the right-wing social network, finding it to be a place where COVID misinformation was widely shared.

As Gross is a nurse and runs a health coaching business in Ohio, which is also where Tenpenny has her osteopathic practice, it is also possible she encountered her through other professional connections before then.

The first CCDH report from March 24,, titled “The Disinformation Dozen,” cataloged the 12 influencers’ reach and network. The second report, published April 28 and titled “The Sequel,” checked in to see which social media companies had followed through and removed content and/or banned these influencers.

Although the initial Disinformation Dozen report resulted in Tenpenny’s main Facebook and Instagram pages being taken down, the osteopath retains her backups, and her main Twitter page is still up and running. Overall, the CCDH  estimates she has lost ~300k followers across platforms but retains ~250k. Between the first and second reports on the Disinformation Dozen, they found that she put out nine pieces of content across her platforms that explicitly violated the platforms’ rules, reaching a potential 824,000 impressions.

However, to this day, Tenpenny can still post and share links to her livestreams on Twitter, Facebook, and Instagram, grow her disinformation network and generate significant capital. Indeed, the CCDH has estimated that Tenpenny has made north of $2 million USD from her various business interests.

Just being on social media and having that many followers serves as a kind of evidence that you are credible.

I spoke to Callum Hood, a researcher for the CCDH about Tenpenny. He explained that just being on social media and having that many followers serves as a kind of evidence that you are credible. However, since the takedowns, this has apparently changed. Hood told me that the the CCDH had recordings of several prominent anti-vaxxers talking about how not just their income and reach had been diminished, but also their credibility:

“Sherri Tenpenny, as far as she has any credibility with some people, it’s because she’s got over a million followers cross-platforms and has reached millions of people, and has been allowed to stay on the platforms. That unfortunately serves as a tacit endorsement of the misinformation she spreads.”

Some pushback, but nowhere near enough

Rep. Allison Russo challenged Tenpenny’s testimony and credentials, pointing out that although being certified as a physician, she was not currently affiliated with any hospital, nor were Tenpenny’s claims supported by any institution. (Tenpenny also admitted that she was not planning on submitting any of her claims for peer review.)

Russo explicitly brought up the Disinformation Dozen report, and asked whether she had any comments on the fact that the Attorneys General from 15 states had sent a letter to the largest social media companies for her and others’ profiles to be taken down.

“We’re part of the disinformation dozen, absolutely!” Tenpenny responded to questions. “We love that. We’ve pushed back really hard on that.” She went on to claim that doctors who refused to take her claims that vaccines made you magnetic seriously were the real “disinformation agents.”

In response to the Disinformation Dozen report, the anti-vax influencers collaborated on a Gamergate-style social media campaign to discredit the research. The campaign was billed as a week of social media activism but made next to no impact. Indeed, it appears that only 37 Twitter users shared hashtags from the campaign.

This year, Tenpenny ran a six-week course called “Mastering Vaccine Info Boot Camp,” where she not only disseminated pseudoscience and lies but also created worksheets and exercises on how best to persuade people on the fence to join her cause.

It was estimated that Tenpenny took in nearly $250,000 CAD from course fees. Nowhere in her official testimony was it explained that she derives up to $2 million per year from spouting misinformation online.

Hood told me that it’s crucial for social media platforms to act before anti-vax influencers are given opportunities to speak in official chambers.

“At the point that someone is given a platform like that, it’s kind of impossible to rewind it,” he said. “It’s the responsibility of [social media] platforms, and for civil society organizations like ourselves, to not only explain why what she’s saying is wrong but also to explain why she’s saying what she’s saying. It’s for business.”

A Twitter spokesperson responded to reporting from the Hill about the initial CCDH report on the disinformation dozen, saying: "We will not take action on every instance of misinformation. In order for content related to COVID-19 to be labeled or removed under this policy, it must: advance a claim of fact, expressed in definitive terms; be demonstrably false or misleading, based on widely available, authoritative sources; and be likely to impact public safety or cause serious harm.”

Tenpenny’s hourlong testimony has already been widely spread as anti-vax propaganda on Telegram. Her own Telegram channel has ~70k subscribers. When she posted her testimony on Thursday last week, it spread to other anti-vax and COVID-denier channels. It is almost impossible to estimate the true reach across Telegram, but Hood reports that it has reached at least 105k views across six different channels. In one channel of just under 20k subscribers, the video was shared at least 14 times by different users.