Why Are Gamers Taking a Stand On Palestine? 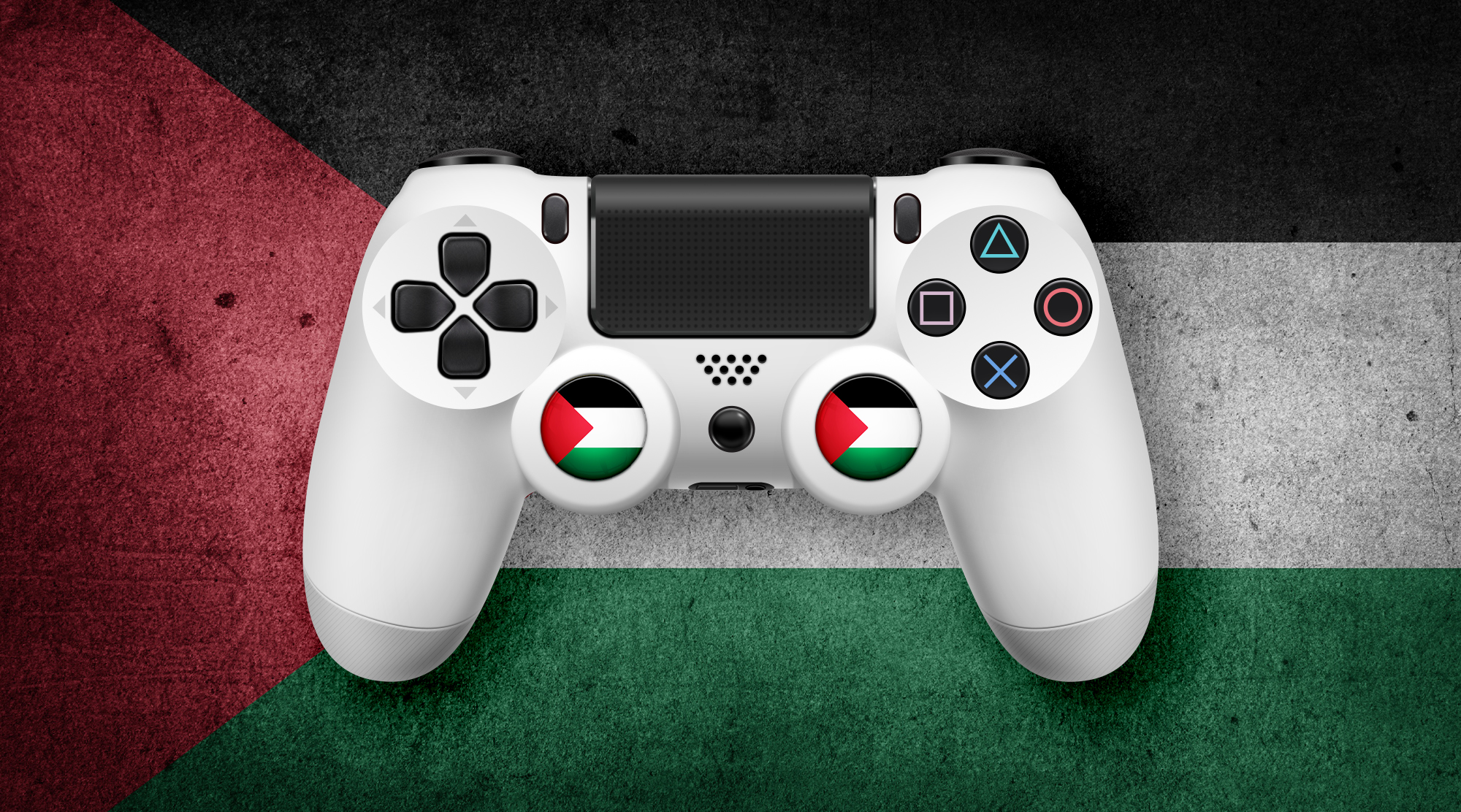 But just a couple of days later, Game Informer’s disappeared without comment, and IGN removed the article and published a statement saying that there were people who were affected on both sides. Only Kotaku and Gamespot’s pieces remain up.

While the removal of the statements from IGN and Game Informer likely reflect a fairly natural rift between an editorial team and the corporate side of the business — wary of both legal and financial repercussions — it does raise a question: what were these game journalism outlets doing reporting on Palestine in the first place? And why take the kind of political stance that often carries material consequences for those in the U.S. and U.K.?

Gamers, and the people who make games, are becoming more diverse.

“It’s not just because more people are changing their minds about speaking out, it’s because more people who have always cared about Palestine are being given a platform,” Trevor Strunk (@Hegelbon on Twitter), who hosts the games and culture podcast No Cartridge, told me.

In 2020, a University of Sheffield study found that two-thirds of the U.K.’s game development workforce is 35 or under, 28 percent are women and 2 percent non-binary, 10 percent come from BAME backgrounds, 28 percent come from somewhere other than the U.K., and 21 percent identify as LGBTQ+.

Although overall that still does not reflect proportionality in society, it does show the number of women workers doubling since 2011.

A 2019 study commissioned by Currys’ TechTalk found that the number of E3 nominees with “good” or “very good” diversity in terms of representation had increased 225 percent in the past 10 years.

All of this adds up to a great deal more inclusivity, equity of employment, and progress, especially from 2006, when “diversity in gaming” apparently meant whether you were a casual or hardcore gamer.

This feeling seems to be upheld by the managing editor of Gamespot, Tamoor Hussain. Hussain is a British Pakistani Muslim who said he’d recently been thinking more about global awareness of Palestinian liberation. He was interviewed on Hasan Piker’s Twitch stream on May 16, and spoke about how he’d always cared about Palestine, but was afraid to talk about it.

“Before I posted that video, I genuinely sat there for an hour, worrying about whether this could hurt me. I’m in the U.K., I’m applying for a job and a visa in the U.S. I thought long and hard about whether this was going to impact me. I’ve lived and worked in the U.S., I pay taxes there, but now I’m worried that I might not make it back to the life I’ve made in the U.S.”

The second explanation has to do with a changing media landscape. Strunk opened our conversation by saying that gaming media, much like all other media in America, had been politicized.

Hussain echoed this on Twitch, saying that while the editorial staff at all the largest gaming sites – IGN, Gamespot, Game Informer, and Kotaku – were all socially conscious, sensitive, and forward-thinking people, they still faced some blowback. An article arguing for more comprehensive intersectionality from Stacey Henley published in the Gamer, noted that “diversity in gaming is a contentious issue. Most people would agree that our industry could do with being more diverse at every level, but those who disagree tend to do so viciously and vehemently.”

Strunk noted that partially this had to do with how media personalities attract an audience, and partially with Gamergate.

“The less said about Gamergate, the better,” Strunk said, “but there’s always that reactionary element of any group. Especially with games – so much of the market is teenagers, and being a teenager to some degree is just being reactionary.”

He compared the drift towards political stances in gaming towards other domains in culture, like how Colin Kaepernick had brought widespread awareness of racial politics into football.

But technical advances in social media gave average people access to audiences they wouldn’t normally have. Platforms like Youtube and Twitch made livestreaming something that anyone could do. The talking-head format encouraged up-and-coming independent creators to say the most outrageous things they could, much like the shock jocks of the 90s. It relates to the whole discourse of trolling – saying something provocative, whether or not you mean it seriously, to build an audience. “That was the goal with Alex Jones – not to be mainstream, but to be talked about in the mainstream, and then get more viewers interested,” Strunk said.

The first big-name streamer, PewDiePie, followed nearly the same path laid down by Howard Stern or even Rush Limbaugh: laying down outlandish, loud, and obscene commentary over whatever he happened to be playing.

This dynamic extended to the crop of written gaming media on the internet.

“Sites like Defector, like Deadspin before Gizmodo gutted it, Kotaku, Polygon, all these sites that are sort of like “blogs plus” are effectively newspaper-ish things, where their authors are emboldened to have like personal political stakes,” Strunk said. “And there's a certain point at which that is profitable and interesting and cool for the people who own the sites.”

“Of course it enters into the writing because it's not just reviews anymore. It's that blog personality mixture.”

Obviously, as Strunk noted, there is a certain point at which those personal stakes threaten the money, and that’s why both Game Informer and IGN pulled their pieces.

Streaming for a good cause

Lastly, there has been a sort of cross-pollinating between gaming media and some forms of political media.

Twitch has a plethora of “just chatting” channels, where creators interact with their fans more in the manner of a live talk radio show. The “just chatting” channels aren’t quite as popular as the action-forward channels, Strunk noted, but they are available right next door within twitch’s panel display. “It’s like Cable TV,” he said. “You can flip through things and find out what’s on.”

Strunk explained that charity streaming is a big part of gaming culture now. A recent Kotaku article noted: “Charity is an extricable part of Twitch’s DNA. Countless streamers and organizations have used it as a means of adding meaning to their broadcasts, boosting their brands, or some combination of the two.”

“If you are on Twitch for a while, you can run your own personal telethon and give to a good cause, and people accept it and typically give quite generously. I would say it's been codified within the past two years, but it probably has a longer tail than that,” he said.

“There's usually a domino effect,” Strunk continued. “A while back, Mermaids, the trans charity, was given a platform by the U.K. government, and Mumsnet got all freaked out and yelled about it until the platform was taken away. And that's when Hbomberguy, who's one of the [left-wing] YouTuber guys, did a stream, had [Alexandria Ocasio-Cortez] on – that was the big moment. He raised probably like a hundred grand for trans charities. And then that kind of created a ripple effect where there were like a bunch of streamers who did stuff for trans charities.”

And the cross-pollinating continues. Just a month ago, the streamer Destiny hosted the Marxist economist Richard Wolfe on his channel for a debate.

Although both IGN and Game Informer’s posts were taken down, Hussain said he was immensely proud of the work he and his colleagues within the industry had done.

“The message for two solid days was look at what they’ve done. So many people saw that, and are getting educated. And now there are screenshots circulating too, as proof that it happened. And now that they’ve removed it, the drama of that is overtaking, and it’s so important to not let the drama be the focus.”

Although Hussain, Strunk, and Nathan Grayson in Kotaku have noted that not everyone is mobilizing for Palestine in the same way they have mobilized for other charities, all have noticed a sort of sea change.

“I do think we can acknowledge also that there has been a shift,” Strunk said. He pointed out that fewer consequences for speaking out about Palestine, nor a few posts on big gaming sites, doesn’t immediately translate to ending suffering or creating the conditions for liberation.

Hussain pointed out in his interview with Piker that there had been huge streams for BLM and other charities last year:

“I spent so much time thinking about the contrast between the way my industry related to other issues, like BLM and Stop AAPI Hate, and I got to see firsthand the power of the videogame industry in social issues. People mobilized within minutes, within seconds for Black Lives Matter. The biggest streamers in the world were doing it. I just didn’t see that happening for Palestinians.”

Grayson noted in Kotaku that Palestine remained a fairly unstreamed charitable cause on Twitch, with only a handful of small-time streamers making it known. Although the Chapo Trap House podcast members had run a stream for nearly $200,000 in 2020, and the leftist YouTube channel the Serfs ran one this year, it remains a minor issue.

“I still took the opportunity to say something because I felt it was important,” Hussain said. “And you probably have a lot to lose, but think of the people out there who have nothing to lose and are being bombed to death still. When you take the decision to make a stand, it makes it even harder for the perpetrators to hide what’s happening.”

In a tweet yesterday, Hussain celebrated that his followers had raised $25,000 for the charity Medical Aid Palestine.

“If you’re not gonna say it now, when are you gonna say it?” Hussain said. “The momentum’s built.”