Where The Wild Things Aren't

Are you worried about the scourge of wokeness coming for your kids? In the present age of trans rights activism, high levels of vaccine uptake, and critical race theory, no parent can afford to be too careful: there’s every chance your kids could be doomed to emerge from their childhoods happier, healthier, and more compassionate than you ever could be.

Don’t worry! There’s hope in the form of Brave Books: a new publishing house founded by a cowboy-hat-wearing ophthalmologist named Trent Talbot. Talbot’s venture promises to ship timeless conservative values in the form of children’s books directly to your door – and all for the low low subscription price of $14.99 a month. Penned by a series of conservative influencers, the books will share a single cohesive setting: Freedom Island, and will come with games and puzzles to encourage children to fight the culture wars IRL.

The first book in the series, Elephants Are Not Birds (written by Ashley St. Clair, a conservative influencer known for fraternizing with neo-Nazis) has already caused a stir. The message of the story is explicitly anti-trans. Kevin, the titular elephant, is tricked by Freedom Island’s chief antagonist, Culture the Vulture, into thinking that because he likes to sing, he needs to transition to living as a bird.

“That’s right,” Culture squawks, “it’s whatever you feel...It’s only your feelings that show what is real...Now is the time, let your bird life commence! It’s the only thing that seems to make sense...” 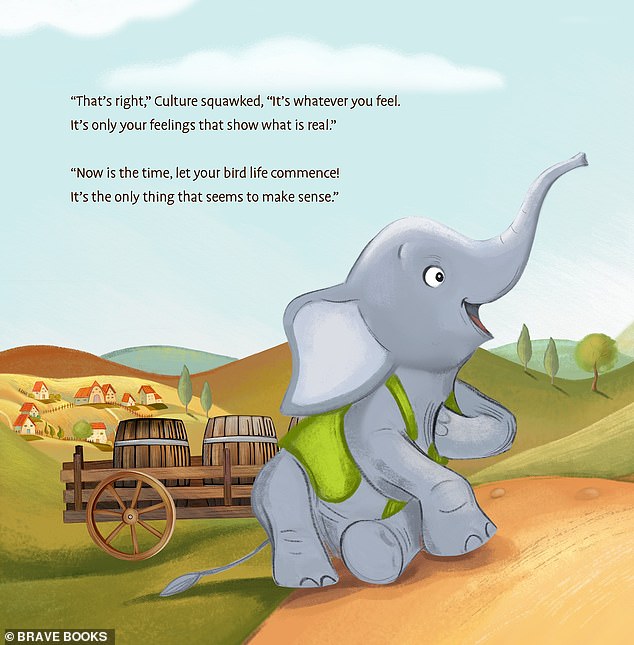 In promoting the book, St. Clair has invented a condition she calls “transgender by proxy,” and has spoken of gender transition as a schoolyard fad that any child might suddenly fall victim to. “You get special attention now in the classroom if you say, ‘Hey my name is not Billy, it’s Amanda,’” St. Clair has claimed. “I am going to have a little boy in November, and it’s scary to think he could come home and say, ‘My friends all identify as something else and that’s how I feel’ and have my son crying because he’s not put on hormone replacement therapy.”

A promotional video for the Brave Books website has Talbot talking about the “timeless virtues” children need to “work hard, care for the weak, to appreciate the freedom we adore in America.”

“Are you confident that your children’s foundational values are grounded in truth?” Talbot asks in opening the video. “I’m not.”

Well, I have to say, like Trent Talbot, I am not confident that my children’s fundamental values are grounded in truth either. For one thing, I’m not completely sure what “truth” means. Is “truth” about correspondence to objective reality, beyond dependence on individual observers and subjective judgment? Or is it about how our beliefs cohere with one another – how one belief supports another until eventually, all our beliefs come to stand together as some sort of impregnably self-verifying whole? Can “values” be true or false anyway, or does Hume’s is-ought problem render Talbot’s statement completely nonsensical? It could just be that, in attempting to secure for his and/or our children foundational values grounded in truth, Talbot is looking for something impossible.

And of course, that’s not the only way of looking at things. Martin Heidegger, following the Ancient Greeks, thought that truth was a process of “unconcealment” whose essence is found in freedom: our human freedom to either let something be what it actually is or else work to alter or distort it in some way. This sort of account might well allow truth and value to be joined – your own values become the prism through which all truth is known. But then of course the question must be, is this guy – Talbot – letting things be what they actually are? Or are his values illegitimately distorting them? Is the Brave Books project grounded in truth?

Consider the question St. Clair’s book most obviously raises. Are elephants really not birds? On one level, elephants are mammals, and birds are birds. Mammals are characterized by the presence of mammary glands in females, a region of the brain called the neocortex, fur or hair, and three middle ear bones. Birds, by contrast, are characterized by feathers, toothless beaked jaws, the laying of hard-shelled eggs, a high metabolic rate, a four-chambered heart, and a strong yet lightweight skeleton. All elephants are mammals. No mammals are birds. All elephants are not birds. QED.

St. Clair’s claim seems like it might be standing up pretty well. But in the fact checking business, there is something that we like to call claim-led fact checking. The idea is that, sometimes, an erroneous or misleading claim might turn out to be literally true, if you checked what it is literally stating against an encyclopedia or the dictionary. But that’s because it is using some true “fact” to mislead people.

At the moment, for instance, it might be possible to emphasize how many of the people currently hospitalized in the U.K. with COVID-19 have been double-vaxxed, and use that to spread vaccine skepticism. This might be true – a lot of people currently in hospital with COVID in the U.K. have indeed had two vaccines. But in fact, this would be an indication of the vaccine’s (relative) success, since it would reflect the fact that it has been rolled out pretty comprehensively to the sorts of people who are at risk of ending up in hospital with COVID-19. The point of the vaccine has always been to limit spread and symptoms, not to eliminate the possibility of infection entirely.

And let’s face it: in practice, the claim that ‘elephants are not birds’, as it is being made by St. Clair, is not being made to assert some truth about the distinction between mammalian and avian life. Properly understood, the Brave Books claim is: “it is as ridiculous to suppose that trans people are the gender they say they are, as it would be to suppose that elephants might be birds.” And this, of course, quite simply isn’t true.

Regardless of what you think about trans people, the reason elephants can’t be birds is because birds are an entirely different order of animal life. But transitioning gender does not involve transitioning to a different order of animal life – or even to living as a member of a different, related, species. When one transitions gender, one actualizes a possibility that exists within human life. The appropriate analogy for St. Clair to have made would thus have been “boy elephants are not girl elephants.” But then she would have had her work cut out for her, because while bull elephants do in fact perform a very different social role to the matriarchal elephant cows, it would not actually seem ridiculous at all, in the context of a children’s storybook, for a male elephant character to identify as a female, and assume a female role. It could even be a lot more intelligently and sensitively done (imagine an elephant-centric trans-accepting equivalent of And Tango Makes Three).

Then there is the issue of the imprint’s name itself. Brave Books is a very bold name for any project. The idea, as far as I can tell, is very simple: Brave Books is called Brave Books because the books they publish are brave and not cowardly. But is this, in fact, brave? Does it – that is – exemplify the virtue of courage?

Probably the classic discussion of courage can be found in Aristotle’s Nicomachean Ethics. For Aristotle, courage – as with any virtue – is the mean between two extremes, in this case recklessness, and cowardice. The reckless aren’t properly courageous, because they rush headlong into danger, which fails to take into account the situation they are actually faced with. The courageous person will still feel fear when they just won’t let it paralyze them. The coward, by contrast, “fears what one ought not,” and “in the way one ought not to”: the coward sees danger everywhere, where it doesn’t exist, and they cower from it.

‘Culture’ is trying to propagandise their kids - Brave Books responds by trying to spook their kids about ‘Culture’.

So are the Brave Books crowd courageous, reckless, or cowardly? Certainly, their mission seems to be primarily motivated by fear of the woke scourge that is coming for America’s children to turn them into anti-white transgender Communists. But is Brave Books right to be fearful? The courageous person, after all, would still fear the things they ought to – they’ll just respond by doing something about it. This might fit the Brave Books model – if the threat they have imagined is a real one. ‘Culture’ is trying to propagandise their kids - Brave Books responds by trying to spook their kids about ‘Culture’.

But just consider the language in which the Brave Books crowd express their fears. St. Clair seems to think that kids these days are transitioning just to fit in with everyone else. This would suggest that a huge critical mass of school-aged children are now trans. But this doesn’t remotely fit any sort of sociological reality. Certainly, there is plenty of empirical evidence which suggests that more young people nowadays are openly trans or queer than before. This, happily, suggests that queer kids are facing less prejudice these days – at least among their peers. But even with a headline figure like “20 percent of millennials identify as LGBTQ,” this still means that the vast majority of young people are cis, and straight. Gender has not been faddishly abolished. So what St. Clair is scared of isn’t real, even leaving aside the question of whether or not she’d be rational to fear it if it was.

Similarly: in his promotional video, Talbot lists a bunch of threats facing American children these days including capitalism versus communism, critical race theory, and cancel culture. Just as a quick pass at all of these: it is not remotely realistic to think that American capitalism is in any way meaningfully threatened by communism (even if it should be); concerns over the teaching of something called ‘critical race theory’ in schools are a far-right conspiracy theory; and the idea that school-aged children are threatened by cancel culture, as if they were opinion columnists that everyone’s just got mad at on Twitter, is laughable.

We’re talking here about kids who may well be attending American schools. If nothing else there are much bigger, and more direct threats - including ones that conservatives are themselves famously keen to help retain. It is as if Brave Books is determined to tell children stories about imaginary things they’d like them to be afraid of, in order to distract them away from the things they’d actually be justified to fear.

Brave Books cannot exemplify the virtue of courage, since the threats its creators are responding to aren’t real ones. On an Aristotelian understanding of courage, they would count as cowards. Their name, like the title of their debut book, is lying to you. So that’s two Pinocchios out of a possible two. Brave Books is not itself grounded in truth.