When Grammar is Political 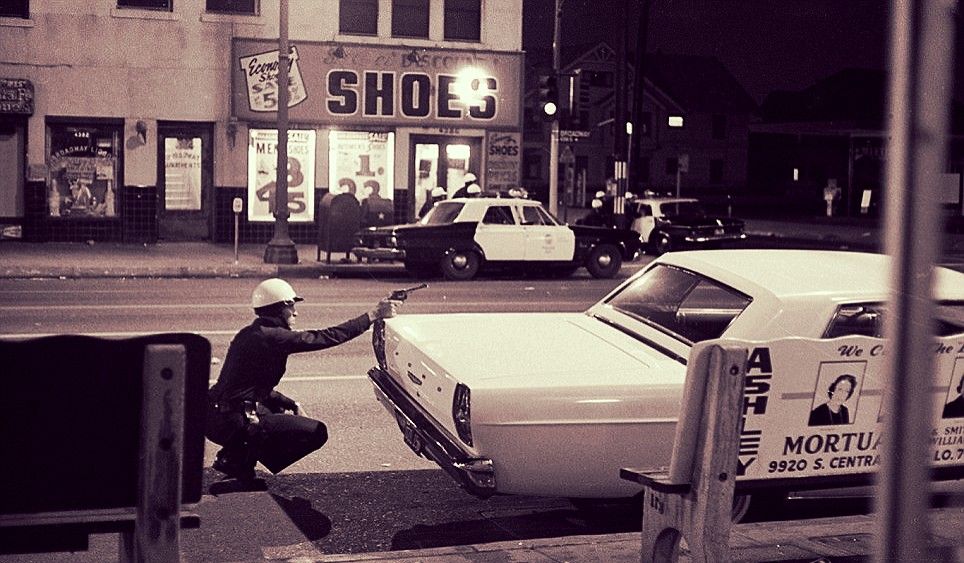 The phrase “officer-involved shooting” was coined by the LAPD in the 1970s, in the name of a team that specifically worked to interfere in the investigation of police shootings, preventing their perpetrators from being brought to justice. Until 1977, the LAPD had no policy governing officers’ responsibilities around firearms when coming into contact with civilians. It was assumed that an official shooting policy would leave officers open to civil suits, and “limit officer action.” When a policy was eventually put in place, the Los Angeles District Attorney’s Office seized upon the opportunity to hold officers to the papers they’d signed by carrying out a program called Rollout, where investigators attended the scene of police shootings to observe the collection of evidence and ensure that protocol was followed. The aim of the program was to assist the DA’s office in securing prosecutions of the officers at fault. Within weeks of the initiation of the Rollout program, the investigators began to complain of non-compliance and withholding of evidence on the part of the LAPD’s Officer Involved Shooting team, headed by Lieutenant Charles Higbie. Only one officer was ever indicted for a shooting throughout the life of the Rollout scheme.

The phrase itself is a clever linguistic gymnastics act that conceals the agency of the police officer. It is implied that shootings are simply facts of life that erupt on the streets, like weeds growing through cracked pavements, rather than brutal and repeated injustices perpetrated by the police, disproportionately upon African Americans. The name of the Officer-Involved Shooting team remains in place to this day, and the influence of this neutralizing language is still with us too. This week the New York Times posted a tweet with the text “Mayor Jacob Frey of Minneapolis tweeted Tuesday afternoon that 4 officers involved in the arrest of a man who died after being handcuffed and pinned to the ground by an officer's knee had been fired.” The sheer tortuousness of the prose here is immediately apparent. This is the result when writers tie themselves in syntactical knots to avoid addressing with clarity the reality of police violence. The tweet refers to the death of George Floyd, a 46-year-old resident of St. Louis Park, Minnesota, who was killed when a police officer knelt on his neck for a prolonged period on Monday evening. Graphic cell phone footage shows Floyd telling the officer he can’t breathe, while bystanders beg the police to release the man from the hold. Over the course of the video Floyd appears to lose consciousness, he was pronounced dead at 9.25pm at Hennepin County Medical Center.

The footage itself makes it abundantly clear how and why Floyd died, but were we only to read the language used by the police and some media outlets to report the death, it would be far less apparent. The Minneapolis police department released their own statement, with the title “Man Dies After Medical Incident During Police Interaction.” The statement included the claim “Officers were able to get the suspect into handcuffs and noted he appeared to be suffering medical distress,” as a description of the brutal arrest. Compare this with a description of a shooting when a police officer wasn’t involved, issued by the same department: “Preliminary investigation indicates that the victim, male believed to be in his mid-20s, was seated in a car when the suspect approached on foot. The suspect shot several times into the car striking the victim.” The active voice, whereby the subject performs the action that is stated by the verb, leaves no ambiguity about what was done, and by whom.

The passive voice in Minneapolis PD’s statement from this week, on the other hand, avoids an accurate description of what was done to Floyd and by whom, but it could hardly be claimed it does so deftly. The trope has become so obvious that satirical website The Onion has parodied it with the headline “Police Still Investigating What Happened Between Officer Discharging Weapon and Suspect’s Head Exploding”. The Onion headline captures exactly the kind of faux naiveté that police departments routinely affect in releasing these kinds of statements, as well as the glaring gaps in the narrative of what really happened. Political consultant William Schneider coined a term for this kind of grammar: the ‘past exonerative.’

The use of euphemistic and neutralizing language is not limited to police departments and journalists: since its inception in the 1970s it has crept so successfully into the lexicon that politicians use it too: United States Senator for Minnesota and former Democratic Primary candidate Amy Klobuchar tweeted a statement addressing Floyd’s death, starting with the time worn “officer-involved shooting,” and going on to traverse the course of three paragaphs without explicitly mentioning the police or their actions once. Klobuchar’s description includes such passive constructions as an “instance of an African American man dying,” a “tragic loss of life,” and “those involved in this incident,” all serving to dance around Floyd’s death without addressing the person who killed him, or the institution to which he belonged.

Perhaps the coming decade will see the decline of the past exonerative tense. Its usage is far more obvious to readers now than it used to be, largely because current technology trends serve to show it up even more clearly: by making visible the realities of police brutality, linguistic attempts to conceal them are rendered increasingly toothless. Adam Johnson and Nima Shirazi, hosts of the podcast Citations Needed, point out that while the sustained campaign of language neutralization was successful in obfuscating police violence throughout the 80s, 90s, and much of the 00s, and it was only when the practice of recording and sharing cell phone footage of incidents of police brutality became common that this process was interrupted. It’s easy to use linguistic devices to dress up ‘altercations’ in a way that masks the operative power relations; it’s a lot harder to reframe video footage to do the same. Certainly the African American communities that continue to be terrorised by police violence deserve better than the police’s grammatical concealment of the truth, and the media’s willingness to accept it into the lexicon. It’s clear though, that if this trend does eventually die out, it won’t be because of any deliberate and honourable choice to disown it, but because the cell phone camera has rendered it unsustainable.