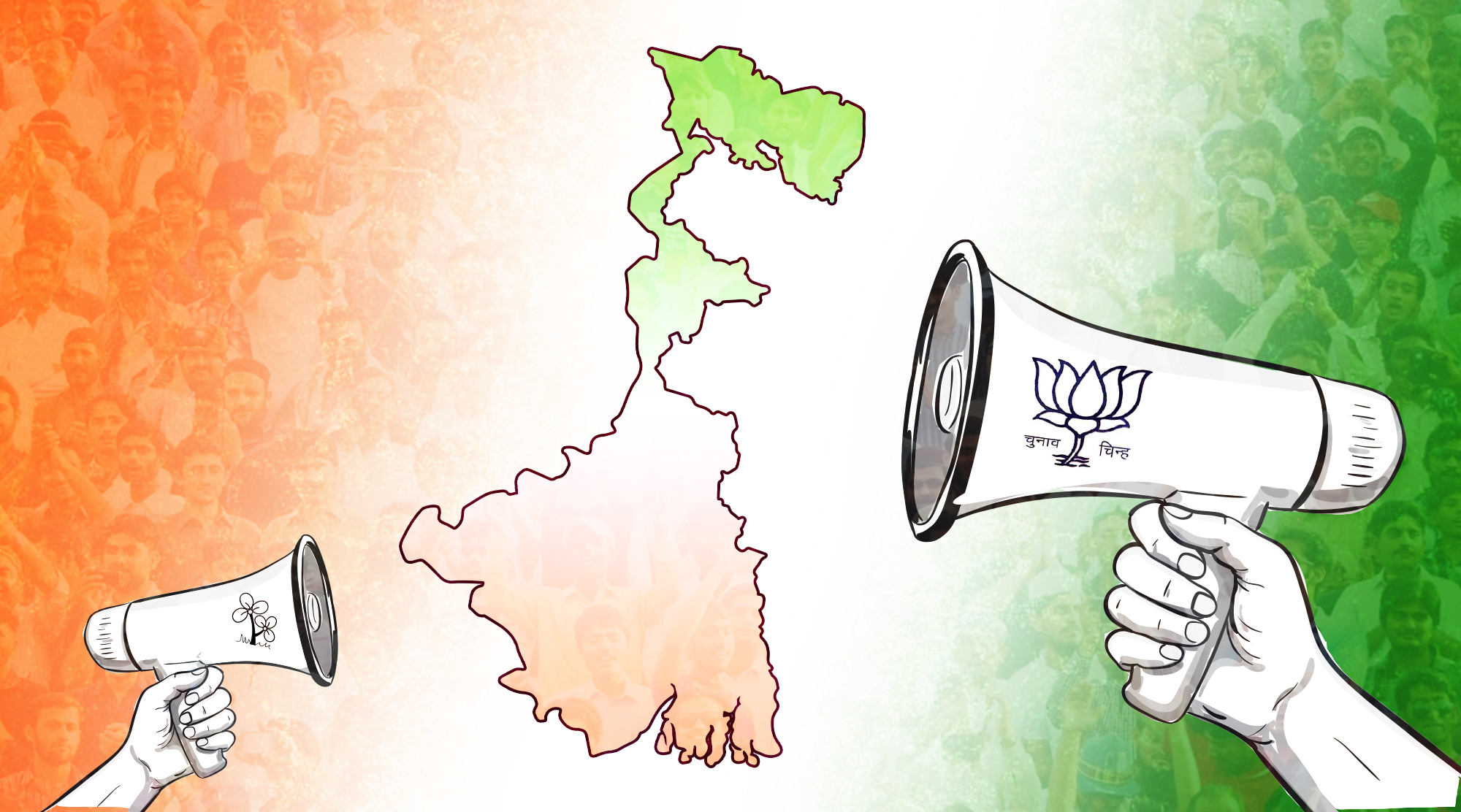 In a jibe aimed at Trinamool Congress (TMC) leader and incumbent Chief Minister of West Bengal, Home Minister Amit Shah at a rally in Midnapore on December 19 said, “Didi this is just the beginning, by the time the election will come, you will be alone in TMC.” Prior to his two-day visit to the state, at least four elected TMC leaders resigned from the ruling party. The West Bengal assembly elections are slated to take place in April–May next year and for the Bharatiya Janata Party (BJP), this election gives them an opportunity to finally make headway after being nearly non-existent in the state's political landscape.

BJP has historically struggled to find its feet in West Bengal with the TMC coming to power in the 2011 by defeating a left government, and being reelected in 2016 securing 211 out of 294 seats. The BJP did not secure any seats in the 2011 election and merely three seats in the 2016 elections. Its first major breakthrough was in the 2019 Lok Sabha elections, when it won 18 of 42 constituencies, signaling a boost in their chances of grabbing some power in the state.

And in the run up to the state elections, the BJP continues to aggressively and consistently build an anti-TMC narrative in West Bengal using all its resources but primarily digital media. At least 30 propaganda websites and video channels have been set up under the guise of providing news, according to an investigation by the Wire. These websites provide no clarity as to who runs them or where they are based from. But a majority of these channels are biased towards the BJP. Five are biased to the TMC and another two are neutral.

Having risen as a regional party, the TMC paints the BJP as an outsider without an understanding of Bengal’s demographic or culture. The BJP on the other hand, harps on about the fact that Bengal is the birthplace of its party founder Calcutta-born Shyama Prasad Mukherjee.

Months prior to the election, the BJP’s social media campaign is already in full swing, spreading several misleading narratives and claims.

Carrying out a Nabanno Chalo(let’s go to Nabanno) protest in October against Chief Minister Mamata Banerjee, the party alleges that TMC-backed goons are behind the killings and violence against BJP workers in the state.

The BJP is also running a campaign against allegations of corruption by Banerjee’s government referencing the Sharadha chit fund scam, the Narada scam and most recently, the alleged misappropriation of Amphan Cyclone relief funds by TMC party workers. The BJP narratives also state that Mamata is anti-Hindu and pro-Bangladeshi, and is opposed to the much debated Citizenship Amendment Act (CAA).

In response, the TMC has amped up its welfare schemes, and started giving stipends and housing for priests to tackle the anti-Hindu narrative.

In early December, the TMC also released a report card on Bannerjee’s ten-year rule to which the BJP responded with #TMCFailcard.

With campaigning slogans like #AarNoiAnnai (no more injustice) and “Ebar Bangla, parle shamla” (Save Bengal if you can this time), the BJP aims to draw attention to the violence reportedly by TMC sheltered goons against BJP karyakartas or party workers. The state has a long history of political violence especially during the reign of the Congress government headed by Sidharth Shankar Ray in the 1970s and subsequently when Jyoti Basu-led Left Front took over. Banerjee’s 2011 victory did little to change the trend of violence for quelling opposition, with turf wars and clashes remaining an intrinsic characteristic of the states’ politics.

Additionally, the recent attack on BJP National President J.P. Nadda’s convoy and the spate of deaths of BJP workers in the state, have made it easier for the party’s "Aar Noi Annai" narrative to gain traction.

The TMC government was anticipating a spike in fake news in the run up to the election, particularly after the BJP announced that their IT cell head Amit Malviya, would be at the helm for West Bengal campaigning. The BJP has also announced that it would be taking to the streets in January for the implementation of the CAA in Bengal, another contentious issue that could create friction in the state.

At Logically we recorded and observed politically driven co-ordinated inauthentic behavior (CIB) and hashtag manipulation. We found that at an early stage of the election season the scale of the campaign is already mammoth. Listed below are a few of the disinformation trends that we have observed on Twitter.

From replicated tweets, to accounts that have been created in December 2020 simply to paint the incumbent party in bad light, some of the hashtags have also been used alongside those of the current farmer protests in India. The close connection between these accounts suggests that the BJP is building a disinformation infrastructure specifically tailored to West Bengal; while some of its existing accounts are still amplifying narratives around the farmer protests. 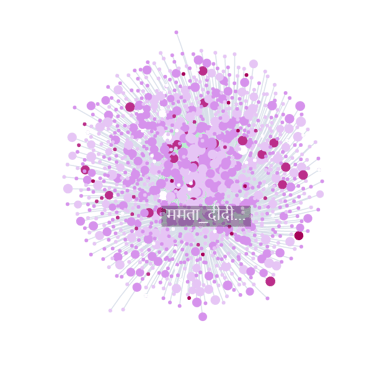 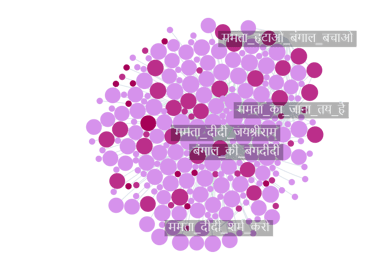 It is worth remembering that "Jai Shree Ram’" chants have been effectively used by the BJP time and again to provoke TMC cadres and Banerjee. In multiple instances, Banerjee has lost her cool at protestors who have shouted ‘Jai Shree Ram’ and ‘Jai Modi’ at her motorcade with seven people being detained in one such incident. Banerjee’s reactions paved the way for incessant political ridicule on social media. With elections a few months away, cries of "Jai Shree Ram’" will gain more traction in the anti-TMC campaign.

Tweets with the same texts indicative of CIB

While the BJP has been steadily making headway in the state, some examples of CIB indicate that the party is still left to take a few strides in becoming confidently familiar with nuances of the state’s language and culture. We found that series of tweets under the hashtag #AarNoiAnnai and #TMCfailcard carried image cards with criticisms leveled against the TMC in Bangla for a particular issue, but the corresponding tweet text censuring the Banerjee administration in English was for a completely different issue. At this stage, it cannot be ascertained if the mismatch of text in caption and image is a deliberate strategy given that English has greater reach than Bangla or if it was just oversight.

Image text translation: Join the fight for your rights and raise your voice against the deprivation and the deception. Why should Bengal remain deprived of education and equal rights? This fight is of the entire community, of the united BJP family. To make Bengal Trinamool free and to bring real change, participate in ‘My family, BJP family’. Give a missed call on 9727294294.

Image text translation: Crores of rupees disbursed by the center for Amphan relief have vanished. Bengal did not receive proper assistance. Didi (Mamata Bannerjee) was too engrossed in the cut-money scandal. Didi, we want an account of the money that was granted for the public.

Image text translation: Ration corruption, cut money scandal - Trinamool has its fingers dipped in every scandal. Members of Didi’s gang have become millionaires only because of corruption. Be ready for the election in 2021 Didi, you will get a befitting reply. Trinamool is synonymous with a gang of thieves.

Some of the tweets carried images that carried a strong anti-Muslim message. The accounts through which these tweets have been posted have timelines filled with pro-BJP posts displaying an innate confidence that in 2021, the BJP will rule Bengal.

Image text translation: Mamata has failed to manage the coronavirus pandemic. Thanks to vote bank politics, a certain community has been granted relaxations under TMC’s reign. The community flouted lockdown norms and gathered in a mosque in Murshidabad for prayers. To stop the spread of coronavirus, a healthy mindset is needed and not politically motivated discrimination.

With the date for the election not even set, and potentially as many as six months to go, it’s alarming to see such a coordinated campaign of disinformation already in place in West Bengal. Logically will continue to monitor the situation throughout the coming months.

The Social Media Strategy Behind the BJP's Fight in West Bengal

With supporting research by Ishaana Aiyanna