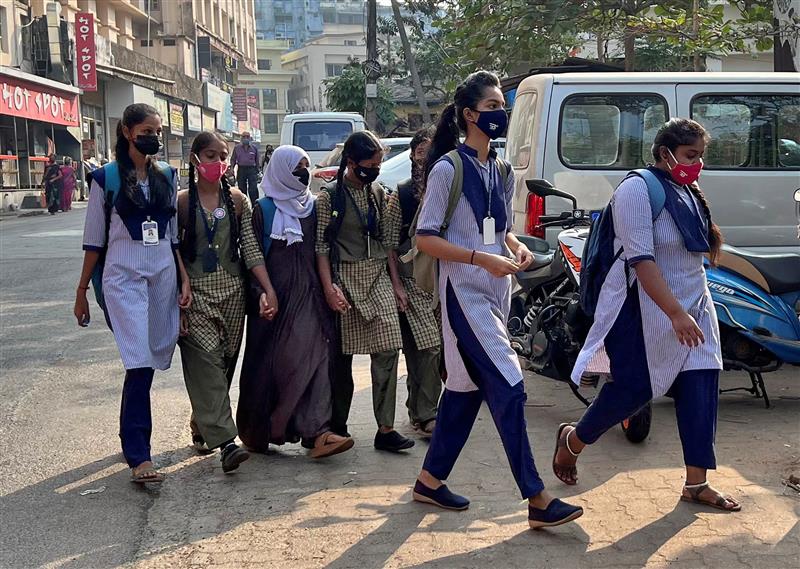 With additional reporting from Priyam Nayak and Dhriti Kamdar

Logically has found that Islamophobic propaganda on “the hijab row,” spread across WhatsApp, Telegram, and Facebook, is being used to influence the ongoing elections in Uttar Pradesh. The posts appear in groups disseminating election information, and they use a variety of false narratives to stoke fears of election fraud and violence.

This comes in the wake of protests against the Karnataka High Court interim order preventing all students from wearing saffron shawls, hijabs, and religious flags within classrooms.

On New Year's Eve 2021, six female students at a government college in Udupi, Karnataka, the first Southern Indian state to elect BJP to power, complained they were not allowed to enter their classroom while wearing a hijab. The issue was brought to light at a press conference, which eventually led to a debate on whether Muslim students should be allowed to wear the hijab in educational institutions. This subsequently snowballed into state-wide protests, with counter-demonstrations of students wearing saffron scarves.

National media began to cover the story. The issue was quickly picked up by political parties campaigning in state elections taking place in Uttar Pradesh, Punjab, Goa, Uttarakhand, and Manipur.

"No woman wears a hijab by choice. Did women ever accept triple talaq malpractice by choice? Ask those daughters and sisters. I have seen their tears, when they spoke about their ordeal," Chief Minister Yogi Adityanath told India Today shortly after a series of protests in Karnataka got the country’s attention.

In 2017, the Bharatiya Janata Party (BJP) promised to pass a bill against “triple talaq” to garner support for Uttar Pradesh’s state assembly elections. Triple talaq, also known as “instant divorce," is an Islamic law that allows a man to instantly divorce their wife by repeating the word “talaq” (divorce) three times in written or oral form. Now five years later, under Adityanath, a Hindu monk known for his incendiary speeches, posturing about the emancipation of Muslim women has once again become a campaigning tool.

Pro-Hindutva groups are propelling the narrative that veiled women in burqas and hijabs can use fake identification cards to cast votes in the ongoing elections.

Old videos posted on right-wing channels are being used on private groups. For instance, the message above was widely shared with the claim that ​​burqa-clad women were trying to cast fake votes in favor of the Samajwadi Party, a regional opposition party touted as the BJP’s biggest competitor in the ongoing elections.

The title of the video reads: “In order to defeat Yogi, fake Aadhaar cards are being used to vote.” The video is being shared with a message that says: “See how they find hacks [to cast fake votes].” The text in the screenshot urged the video to be shared in Uttar Pradesh, presumably in light of the ongoing elections.

However, a report by Factly found that the video has been misattributed. It is in fact from Rampur’s municipal elections in 2017, and the individual who allegedly caught the women supposedly casting fake votes was from an opposition party.

The incident was picked up by various users and propaganda websites to spread the narrative that hijabs can be used as a tool to conduct voter fraud.

Translation: Six people were arrested in Rampur for attempting to cast fake votes, of which four were women, so this is why these people want the hijab.

Translation: Six people were arrested in Rampur for attempting to cast fake votes, of which four were women, so this is why these people want the hijab.

A pro-hindutva Telegram channel shared the same news, saying, “Taking advantage of burqa she was casting fake votes.” Such narratives are being shared on channels despite a 2010 Supreme Court judgment saying women will have to lift their veil while being issued voter cards, in addition to conditions of identification being issued locally when needed.

Narratives around the oppression of women

This Telegram post targeted senior Indian National Congress leader Rahul Gandhi’s support for girls protesting the hijab ban. The page has over 1,600 followers. A Hoaxy visualization revealed that Srivastav has over 17,000 followers on Twitter, with high engagement. Both the Telegram and Twitter accounts have been routinely endorsing narratives targeting minorities and favoring the ruling BJP during the hijab row.

On Tamil Nadu’s streets, Muslim women were wearing a burqa and protesting for the hijab when the locals there started throwing sewage water on them. The protest ended right there as they ran away. Hindus have started awakening. Whenever Hindus rise up, these people [Muslims] will run like that. Wake up Hindus.

This message on the group reads: #Saffron Karnataka is colored with saffron. It is enchanting and beautiful to look at. People of U.P. you also promote saffron, everyone go out and vote for Yogi. Jai Shree Ram.

Many numbers in the group start from +1 and +234, country codes for the United States and Nigeria respectively. This would be in line with research that has shown the Indian diaspora in the U.S., who are more liberal when it comes to American politics, tend to be more conservative on Indian issues. In addition, a study found that one-third of Indian-American respondents favor the BJP.

Another trend emerging from such groups is content promoting claims that hijabs and burqas can aid criminal and terrorist activities. A term used on several groups was burqa jihad, akin to previous claims of thook (spit) jihad, population jihad, or love jihad, a conspiracy theory which a Logically investigation found was being used to influence West Bengal elections last year.

The above screenshots are further examples of content shared on pro-Hindutva channels and groups, claiming it is easier to commit crimes in veiled clothing since it prevents identification.

Leaders ranging from Prime Minister Narendra Modi to opposition politicians have spoken about the hijab while campaigning. Combined with several anti-Muslim speeches given by BJP leaders in the elections, not only has the commentary over the hijab row failed to make a distinction between a hijab and a burqa, but has also been weaponized to target the Muslim community in Uttar Pradesh.

It comes amid a series of polarizing speeches by BJP leaders, and after Adityanath’s remark that the elections will be 80 percent versus 20 percent, which many understood as referring to Muslims, who constitute roughly one-fifth of India’s population. Evidently, the issue is seen as core when garnering votes in Uttar Pradesh.

With over 100 million voters, Uttar Pradesh is India’s largest state, and is particularly vulnerable to communally divisive misinformation and disinformation campaigns.

Beyond the App Ban: How Important Is It to Protect Our Data?

As geopolitical tensions between India and China increase, India has banned 59 mobile applications developed by Chinese companies. The government’s interim order was communicated via a press release, stating that “these apps were engaged in...

Double Check: Is Pakistan Responsible for Pollution in Uttar Pradesh?