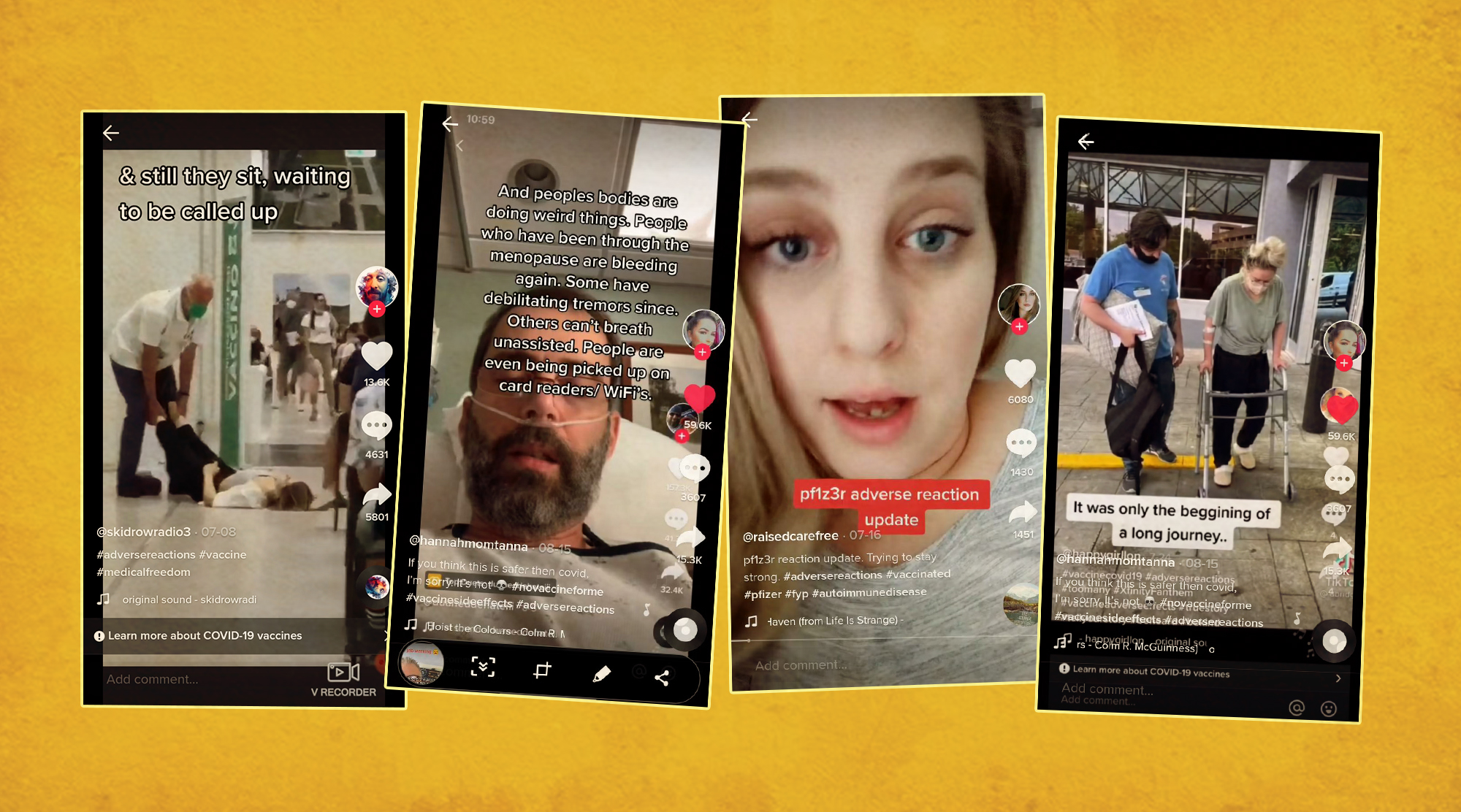 A real estate agent posts her journey from aspiring fitfluencer to medical checkups and using a wheelchair. An aspiring model shares her story, including footage where she’s shakily trying to walk. A mom, driving to work, is shown having a seizure, while her daughter speaks to EMTs offscreen, explaining she’s had the vaccine a few days ago. A woman is shown from a distance in the queue at Walgreens, being carried out after getting her shots. “We want to be heard,” a chorus of TikTok users record themselves saying.

A series of viral videos has grown into a whole genre of “vaccine reaction” clips, found across every social media platform. The format can vary; often they’re posted by the person who’s had the supposed vax reaction, or someone who was nearby when something dramatic and scary happened to someone else.

While serious adverse reactions from vaccinations of any sort are rare – and vaccines themselves cannot cause neurological damage – these “vax reaction” videos seed fear and doubt about mass rollouts, and help fuel the current political opposition to vaccine passports or vaccines for kids. Even to vaccine advocates, these videos can be alarming: how could a vaccine do that?

A January press release from the Functional Neurological Disorder Society foresaw that this could be a problem. It provided a possible explanation:

“We have become aware of a very small number of high-profile social media videos suggesting major neurological complications following vaccination against COVID-19. Whilst we do not wish to comment specifically on any case, we would state, as general comment, that many of the clinical features reported and observed on video in some cases are those of functional neurological disorder (FND). FND can be diagnosed with good accuracy from videos on social media where they are often confused with other neurological conditions.”

Their call was echoed by Dr. Matthew Butler at King’s College London. Speaking to MedPage, he said, "we strongly encourage clinicians to be aware of the possibility for FND in response to SARS-CoV-2 vaccinations. FND can be a serious and debilitating condition; however, it does not implicate any vaccine constituents and should not hamper ongoing vaccination efforts."

“FND is a real, brain-based disorder at the intersection of neurology and psychiatry whereby patients develop a range of neurological symptoms precipitated and perpetuated by biological, psychological, and/or environmental factors,” a report in JAMA explains.

This doesn't mean that patients are making it up. It's just that these involuntary motions have a different origin.

In patients who have FND, their brain scans and blood work come up clean – every test is negative, which in itself can be distressing. This doesn’t mean that patients are making it up, nor is it a form of mental illness: patients experience their symptoms as involuntary. It’s just that these involuntary motions have a different origin. It’s a biological response to prolonged emotional distress.

“When the tremors started initially I was annoyed,” says Missy Oveson, of Salt Lake City, UT.  “I wanted to get some sleep and they were keeping me awake when they started. I became more worried later when I started trying to work and I could feel it interfering with my ability to function. When the seizures started coming on I was frustrated and a bit depressed as it felt like my life as I knew it was over.”

These symptoms can last for anywhere from a few weeks to decades – one of the cases examined in the movement clinic had lasted 39 whole years. And surprisingly, sometimes a diagnosed physical condition can be the stress trigger for psychogenic illness – the population most likely to suffer from a so-called psychogenic seizure are people who have epilepsy.

FND is a lot more common than most people imagine. And since the beginning of the pandemic – a time of massively increased stress for many – neurologists have reported a massive spike of diagnoses. One paper lists that a London clinic experiences effectively “double the referral rate” for movement disorders since the pandemic. A paper in Neurology Clinical Practice showed an increase of 60 percent for FND in their clinic.

Diagnosing FND is fairly difficult for those not trained in movement disorders or neurology more generally, but they’re easy for experts to spot. “We look for specific features, particularly the inconsistency. The symptoms come and go, they don't have a biological explanation according to what we know today of medicine,” Dr. Alfonso Fasano, a movement disorder specialist, told CTV news.

Telling people that their symptoms are imaginary is not only cruel but dangerous.

What makes these narratives so hard to challenge, from a public health comms perspective, is that telling people that their symptoms are imaginary is not only cruel but dangerous. It can bury awareness of an undetected chronic illness, or further push out marginalized voices from medicine. So while vaccines definitely cannot cause these symptoms, multiple experts have observed that they provide a convenient peg for anti-vax narratives. Fasano wrote in the Journal of Neurology, Neurosurgery and Psychology about how these disorders could be used to fuel vaccine hesitancy:

“In our view, FND following COVID-19 vaccination will not be a rare phenomenon and will be widely covered by the media, being interpreted as a direct consequence of the vaccine, as already seen in the past.”

It’s not all in your head

As mentioned, FND is common, and instances of mass FND are common as well. It’s a little challenging to talk about this kind of thing without dipping into the language of “mass hysteria” or “it’s all in your head,” so perhaps it’s best to turn to a few contemporary examples of psychogenic or sociogenic illness. VICE has already reported on the tics that have spread apparently on TikTok in 2020, but there are other pre-pandemic instances.

Nine years ago, a wave of tics hit the town of LeRoy, New York. A group of teenage girls, all with no underlying medical problems, became afflicted throughout the year with Tourette’s-like symptoms. The townspeople were baffled, and soon suspected an environmental disaster and asked Erin Brockovich – yes, the one from the Julia Roberts film – to come and sample the soil. Parents were desperate for answers, even though an environmental problem would logically have affected more than just a few teenage girls. The investigation came up clean: no environmental problems were found.

The New York Times quoted King’s College epidemiologist Simon Wessely in their write-up about LeRoy: “When the nature of an outbreak is not recognized, and a fruitless and expensive search for toxins, fumes and gases begins. Anxiety, far from being reduced, increases. It is only then that long-term psychological problems may develop,” Wessely wrote.

It’s a boring truism that we’re living through uncommon times, but it bears remembering how uncommon they are.

It seems obvious to say that the pandemic has stressed people out, but we have a better idea of exactly how much, now that studies are starting to come out. The U.K. government has provided some illuminating statistics: during the first wave, the percentage of the population experiencing “clinically significant psychological distress” shot up from 20.8 to 29.5. One comparative report from the NHS found that in 2020, one in six children referred for mental health reasons had a probable mental disorder, up from one in nine in 2017. In a CDC survey of the U.S. population from April to June 2020, 40.9 percent of the respondents reported adverse mental or behavioral health conditions. The incidence of anxiety disorder was approximately three times as high during the same period in 2019, and depressive disorder four times as high. It’s a boring truism that we’re living through uncommon times, but it bears remembering how uncommon they are.

Treating FND is possible – usually, the treatment involves some form of therapy – but there remains a significant stigma against it. Beth Pardo, a patient of Dr. Fasano’s, explained to CTV: “As much as I was relieved [by my diagnosis], I was a little embarrassed. I felt like this was in my brain a little bit, or under my control, or there was something I could have done to maybe not have this happen to me.”

Missy says she got lucky, in that her neurologist was able to help her understand the condition. ”My neurologist did a fellowship in FND and was able to determine the diagnosis after a few tests. She gave me a lot of information to go through and had me get started with CBT and some medication to help with my symptoms. The information let me know about some of the symptoms I might experience before I experienced them.”

“It helped me understand what was going on which in turn allowed me to be able to find ways to explain it. I wanted to be a writer when I was a kid and have had a lot of doctor visits through my life so I've become pretty good at finding ways to convey pain and weirdness in my body. Writing has actually become a way that I've coped with my symptoms as I've written about my experiences.”

Anti-COVID-vax narratives routinely employ the idea that the medical establishment, the press, and world governments suppress these “vax reaction” stories. People who have this real movement condition could easily be shunted into the misinformation ecosystem if they encounter doctors who have no experience dealing with FND. Or, possibly, even if their practitioners are familiar, and their doctor tells them that the solution to their seizures is to go get therapy.

As Logically’s Alice Franklin has argued before, it does not actually help anyone to play “disability police” with how others’ medical conditions may present on social media. Especially with unpredictable conditions that might get attributed to the wrong thing – in this case, vaccines, rather than prolonged emotional distress.

Oveson clarified that she has been vaccinated against COVID-19 but that “it didn’t have much impact on [her] FND aside from some basic stress response of extra shaking after the second shot, and some muscle stiffness which is normal with any shot.”

"Probably the hardest part of the condition is that you can never predict how you will react,” Oveson adds. “You just need to be patient as you deal with FND.”