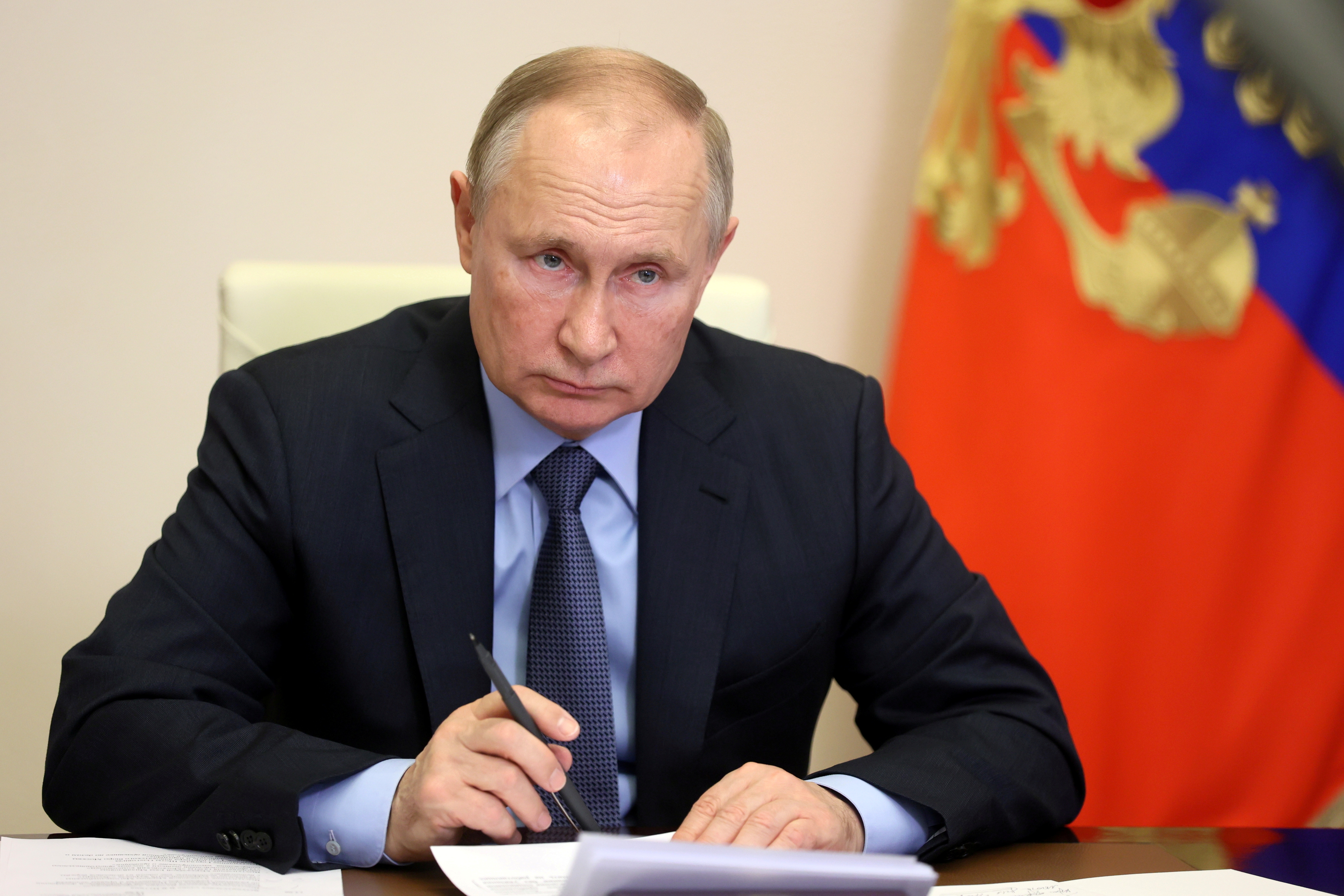 Ukraine watchers should not be surprised Russian forces have now surrounded Ukraine from three sides. In July 2021, President Vladimir Putin laid out exactly why he would invade Ukraine. His essay is a classic work of fiction cast as a historical fact: Putin elides over hundreds of years of history, key dates lay unaddressed, and most glaringly the mass starvation of the Ukrainian population is dismissed as a Western conspiracy theory.  Should one doubt Putin’s work is a piece of disinformation, Putin’s wily ironic use of the expression, “sow discord” should clear up any confusion. “Sow discord,” is a common catchphrase among the Western press when describing Russian disinformation efforts. But, did Putin’s essay convince anyone in Ukraine that the countries were so historically and culturally interconnected they should be formally linked?

Putin elides over hundreds of years of history, key dates lay unaddressed, and most glaringly the mass starvation of the Ukrainian population is dismissed as a Western conspiracy theory.

Steve Erlanger in the New York Times will tell you it did not have any impact, arguing that the “for” or “against” Russian camps appear fairly well established in Ukraine. And while this may be true for the moment, because Ukraine has a chaotic political background, Putin’s message still resonates at some level with the anti-Russian crowd. Putin realizes using disinformation to tug on the reality of Ukraine may weaken the resolve of some Ukrainians. A populist illiberal in charge in Ukraine will be isolated from the West, and therefore Ukraine will be weak. Putin brings to the fore the seeming similarities of how Russia and Ukraine developed after the dissolution of the Soviet Union. It is in this space Putin’s message may have some traction among Ukrainians. His message is that the Western democratic experiment has failed in Ukraine. And he is partially correct.

From about 1989, academics, politicians, and thought leaders gushed with enthusiasm as the Soviet Union under Mikhail Gorbachev pivoted from autocracy to democracy. In the mid-1990s, structural changes, democratic indices, and the cannon of accompanying literature confirmed the new Russian Federation was maintaining its democratic course. But by 1998 – with the end of the Yeltsin administration and the election of Putin – the democratic backsliding had begun. In 2021, Russia teeters on the edge of a complete authoritarian state.

Ukraine shares a similar initial trajectory. Like Russia, the post-independence Ukrainian experience began with both structural and normative changes in the direction of democracy. And like Russia, Ukraine’s progress eventually stalled.

However, unlike Russia, where post-independence instability, the rise of populism, economic shocks, and an autocratic history all derailed movements towards more democratic institutions, a similar set of circumstances in Ukraine have led to a different outcome. Ukraine’s democratic change of course occurred about ten years after that of Russia. By around 2010, Freedom House and other democratic indicators showed Ukraine had suspended its transition. Ukraine was stuck as a quasi-democracy.

Upon independence from the Soviet Union in 1990, Ukraine made democratic government a priority. The 1990 Ukrainian declaration of state sovereignty, its 1991 declaration of independence, and its 1996 constitution emphasized a conversion to democracy. The country initially made real progress though it faced the same obstacles Russia did: a struggling economy, rampant crime, periods of emergent populist leaders, and a political past controlled by foreign autocrats.

Indeed, Ukraine’s historyhas been one of foreign domination only punctuated by brief episodes of independence. During these fleeting moments of self-rule, the country faced powerful controlling neighbors.  Among its dominators was and is Russia. Ukraine throughout substantial periods has either been a part of Russia or was a client state.

This has left a duality within Ukraine. On the one hand, Ukraine’s sense of the rule of law has been weak. Russia has passed over to Ukraine an “imperial worldview,” which is anti-democratic, nationalistic, advocates for strong central authority, and considers the United States to be elitist and hypocritical. The factors have embedded a political legacy contrary to democracy. Furthermore, the forced immigration and emigration policies of the Soviet Union, and Czarist Russia left Ukraine ethnically divided. For example, to gain additional influence over Ukraine, Stalin settled ethnic Russians while deporting or starving to death hundreds of thousands of Ukrainians.

For the time being much of the country sees western liberalism as the future in part because it is not Russian, while a sizeable minority sees a Russian political system as the answer because it is perceived as establishing order.

Today Ukraine has a majority resentful of anything Russian living together with a sizeable ethnic Russian population. This paradoxical situation bears upon Ukraine’s current and future political direction. For the time being much of the country sees western liberalism as the future in part because it is not Russian, while a sizeable minority sees a Russian political system as the answer because it is perceived as establishing order. Putin’s intent is cultivating the latter into a majority.

The outcome of this conflicting cycle is mixed. By 2004, a much stronger Russia was back on the scene under Putin. Reemergent Russia reacted bitterly towards Ukraine’s democratic progress and its continued turn towards Western Europe. In 2004, Russians worked with supportive Ukrainians and helped to elect Viktor Yanukovych as president. From one perspective, a bulwark against authoritarianism has been the power of the people. It’s well-established that the average Ukrainian is willing to protest and fight against would-be autocrats. Following the rigged election, the people of Ukraine took to the streets in what was called the Orange Revolution. By 2005 Viktor Yushchenko and Yulia Tymoshenko were in power and Yanukovych was out. By all accounts, this was a big step in a democratic direction.

What followed next was a rapid set of presidential changeovers among Yushchenko, Tymoshenko, and the resilient Yanukovych. Yushchenko and Tymoshenko proved to be kleptocrats and did not last long, and their tenures eroded confidence in the Western liberal order. By 2010, the now populist Yanukovych was re-elected as president and quickly countered the will of many Ukrainians. Yanukovych saw the West as less viable and began to reorient Ukraine towards Russia. By 2013, Ukrainians again took to the street in opposition to Yanukovych in what was called the Euromaidan revolt. Yanukovych was forced out by parliament. Putin responded by annexing Crimea and invading eastern Ukraine. In this case, the ethnically polarized Ukraine worked against democracy as Ukrainian Russians sided with Russia. The outcome of this volatile period was by 2010, Ukraine delayed its democratic transition and has remained a corrupt and chaotic hybrid democracy.

While the Russians favored Yanukovych more than the other Ukrainian politicians, the overall objective was to keep Ukraine weak and destabilized.

As noted, Ukraine and Russia shared economic similarities which have influenced their respective democratic setbacks. Like Russia, Ukraine has struggled economically during most of its post-independence period. During the political crisis over Yanukovych’s election, the Ukrainian economy was beset by a series of substantial problems. The global economic crisis of 2008 hit Ukraine hard. In 2009, compounding the economic crisis, Russia stopped the flow of natural gas into and through Ukraine. Russia essentially coerced Ukraine to politically submit or face a frozen winter. Despite Yanukovych’s 2010 election, the pressure to bend to Russia continued. While the Russians favored Yanukovych more than the other Ukrainian politicians, the overall objective was to keep Ukraine weak and destabilized.

Amid the turmoil, there was a corresponding rise of populism in Ukraine. Ukraine continued to roll to political extremes as personalities come into the political scene and then exited. Many Ukrainians associated democracy with political, economic, and security uncertainty and therefore, considered it an inappropriate form of government. Surveys of Ukrainians over the last 15 years indicated a formidable minority believed an autocrat was what the country needed. Ukrainians saw politicians as both the cure and the problem. The citizens may like democracy as a concept, but in practice, they saw it in an environment which enabled extensive corruption. Ukraine’s economy is fundamentally constrained because of the rampant graft and economic perversion driven by politicians. Putin interposes in his work the strength and order brought to Ukraine when kings, czars, and autocrats ruled both countries as a single domain.

The citizens may like democracy as a concept, but in practice, they saw it in an environment which enabled extensive corruption.

The last seven years have been unstable due to war with Russia, a sputtering economy, and a corrupt system. However, even during this uncertain atmosphere, Ukraine’s democratic indices have improved slightly. One of the fundamental differences between the trajectory of Russia and Ukraine has been the status of the legislature. In countries where populists are able to win a sizeable plurality, or an outright majority in the legislature, the country is ripe to move towards autocracy. This was the case in Russia where Putin’s party won absolute majorities in 2007, 2011, and 2016. He established a “compliant legislature.” Putin manipulated the legislature to do his bidding and methodically increased his control. In comparison, in 2010 Yanukovych’s party was able to achieve a modest plurality with 30 percent control of parliamentary seats. This proved to be the high mark of his influence. The Ukrainian legislature remained one of the checks on executive power. No particular political party has succeeded in establishing longevity of control at the same in the legislature and the presidency.  For example, following Yanukovych’s ouster, Ukrainian nationalist-populist Petro Poroshenko was voted in. With him came his pro-European party which won 132 out of 423 seats. In the 2019 election, Ukrainians replaced Poroshenko with a slightly more Russia-friendly populist leader Volodymyr Zelenskyi. Neither leader had pushed for democratic changes nor tried to completely control Ukraine. As of 2021 Ukraine still remains “partly free.”

Ukraine and Russia share several common traits, such as post-Soviet instability, the rise of populism, economic shocks, and a normative political past. These four characteristics are reasons why Russia under Putin reversed course and has now moved sharply away from democracy and towards autocracy. The four characteristics are also present in Ukraine and are components in the Ukrainian tilt back towards authoritarian rule. However, there are two important distinctions that halted the reversal and left Ukraine as a hybrid democracy. The first is no Ukrainian leader has been able to dominate the legislature and the intense negative attitude towards Russia. Such factors are not a guarantee Ukraine won’t slide further back. If the four conditions in Ukraine further deteriorate there is a possibility a populist will emerge and that populist will wrest control of the legislature. The threat from Russia destabilizes Ukraine and the right strongman might be able to harness it for his personal power grab. Should the four conditions remain static it is likely so will Ukraine, stuck in the hybrid zone. So long as Ukraine remains trapped, Putin’s distorted message will likely resonate at some level among anti-Russian Ukrainians.

Russia’s warfare against Ukraine is being fought both physically and digitally. There have been waves of cyberattacks against Ukraine’s internet infrastructure, and disinformation operations are targeting the citizens of Russia, Ukraine, and the...