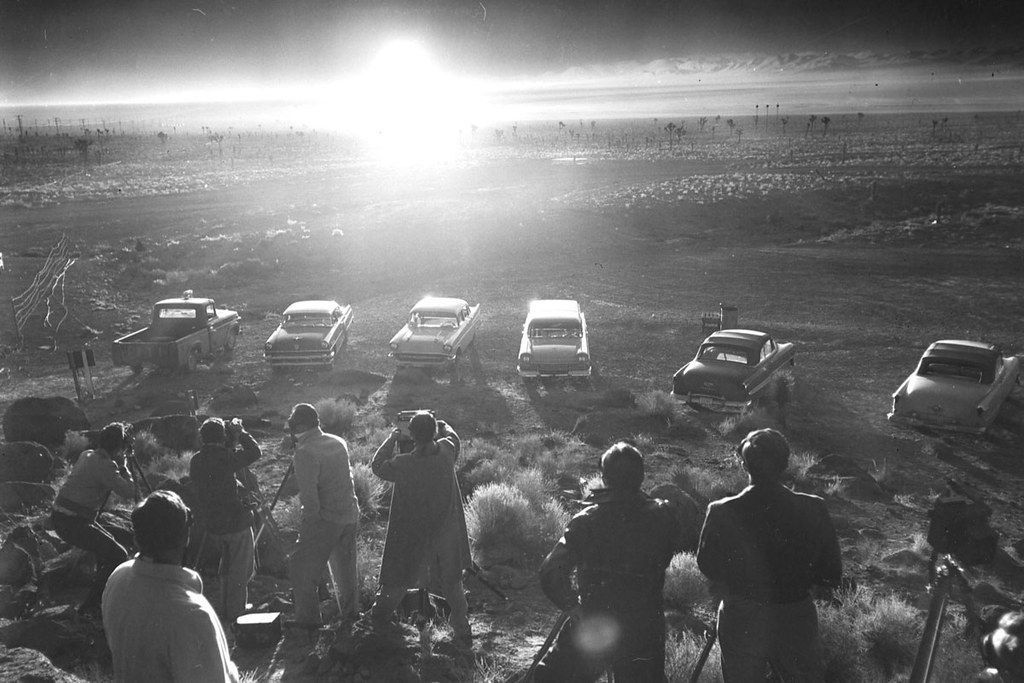 There’s a film on Youtube that shows one of those baffling, unbelievable displays of hubris that the twentieth century seems to have specialized in: five men in khaki US Army fatigues stand in the Nevada desert, against the backdrop of a dazzlingly clear blue sky. One of them is wearing sunglasses. Thousands of feet above them, two F-89 jets leave vapor trails as they climb. One of the planes releases a nuclear warhead. On the ground, the men are excited. Slightly to their left is a crudely made sign, reading “Ground Zero, Population = 5.”

The men in the video are in an area of desert known, somewhat euphemistically, as the ‘Nevada Test Site.’ As the tape rolls on, we eventually see the nuclear explosion, turning the sky from blue, through shades of neon pink and orange, to black. The men are holding their hands up. It’s impossible to tell if they’re shielding their eyes or still performing their salutes. The film’s narrator is yelling excitedly: "It happened! The mounds are vibrating. It is tremendous! Directly above our heads! Ah!" As the commotion subsides, the men shake hands with each other triumphantly. One of the men in the video is Colonel Sidney Bruce. Col. Bruce’s only regret, says the narrator emphatically, is “that everybody couldn’t have been out here at Ground Zero with us.” The purpose of this stunt was to demonstrate the supposed safety of a nuclear explosion.

When Col. Bruce stood beneath the exploding sky in 1957, the test program had already been ongoing for six years. From the establishment of the site in 1951, until the practice was banned in 1992, the United States Army carried out 928 nuclear tests, ostensibly to observe the impact, capacity for environmental damage, and ‘survivability’ of the nuclear weapons the US was developing as part of the Cold War. Beginning in the 1950s and continuing through the latter part of the twentieth century, the area around the site saw marked increases in the rates of various cancers reported in the population, including in particular an increase in the deaths of children from leukaemia between 1951 and 1958. Researchers found that much of the damage done to public health could be traced back to contaminated milk – dairy had not yet become industrialized on the scale we’re used to today, which meant that communities relied on local milk production. Cows grazed outside in pastures, so when radioactive fallout was spread onto the fields downwind from the test site, it was consumed, incubated and later transported, clinking in bottles, directly to the breakfast tables of up to twenty American counties, spanning the states of Utah, Nevada and Arizona. To date, the US government has paid out more than $2 billion to more than 30,000 claimants, known as ‘downwinders,’ who have experienced ill health as a result of this fallout.

Stories like these are catnip to conspiracy theorists. It really is the case that the US government spent decades ignoring the concerns of citizens and carrying out huge and massively consequential experiments that went on to kill thousands of people and make thousands more severely ill. Some estimates now conclude that between 1951 and 1973, the fallout was responsible for between 340,000 and 690,000 American deaths, more than the immediate death tolls of the bombings of Hiroshima and Nagasaki combined. In a discussion with a conspiracist about the supposed health risks of 5G, it’s difficult to argue that governments would simply never countenance acts of environmental terror that would harm citizens in their thousands, as your opponent can easily point to the fact that they have done just that. Indeed, the refusal to entertain the idea that state action could never be harmful, self-defeating or simply misguided arguably constitutes a conspiracy theory of its own.

This represents one of the hardest things about systematically disproving conspiracy theories: some of them are true. 'Just because you're paranoid doesn't mean they aren't after you,' as Joseph Heller wrote in Catch-22; a novel premised on the shared cultural understanding that the US government is more than prepared to destroy its own people in pursuit of its goals. The history of the United States is littered with genuine occurrences of harm done to the public in the name of science, whether through incompetence or malice. For ease of expression, let’s call these public health betrayals. The role of genuine historical public health betrayals in conspiracy thinking is fraught, however. Some proponents of conspiracy theories lean heavily on the existence of these historical examples to bolster their arguments, and to help radicalize others who are otherwise only ‘conspiracy curious.’ It’s interesting, and uncomfortable, to note that while the people who have historically been harmed or even killed by public health betrayals tend to be from marginalized groups, those who trumpet them most loudly to support conspiracy theories are often not.

How should we tackle this problem? If we acknowledge these examples, are we doing the conspiracy theorists a favor by amplifying some of the more persuasive elements of their arguments? I don’t think so: it’s only by accepting the examples of the genuine public health betrayals to be found in history that we can understand how these ideas reproduce themselves; how information can become disinformation, and knowledge breeds anti-knowledge. The similarities between the real stories and the confected ones help to give credence to conspiracy theories, and they can also serve to solidify existing assumptions into hard ideologies.

These stories contribute to what researcher Whitney Phillips calls “deep memetic frames”: ideological ways of seeing that allow for beliefs to be transmitted and replicated so that new events and figures fit into existing frameworks rather than challenging them. The example here is the belief that given the US government was at one time willing to conduct dangerous scientific experiments that risked the lives and health of citizens exposed to specific atmospheric conditions, it stands to reason that the rollout of 5G is something to be very suspicious of, as the believer identifies it as having the potential to do similar damage. Journalist Leah Sotille reported on anti-government conspiracy theorists that specifically trace their government skepticism back, at least in part, to the Nevada nuclear test program in her podcast and reporting series Bundyville.

The anti-vaccination movement, too, has its own historical precedents to bolster its belief in the malicious potential of modern medical science. Between 1932 and 1972 the United States Public Health service conducted a study known as the ‘Tuskegee Study of Untreated Syphilis in the Negro Male’. The study, carried out in and around the city of Tuskegee in Macon County, Alabama, tracked the progress of untreated syphilis in African American men. The researchers told the participants they were being treated for “bad blood,” (a common catch all term for illnesses including syphilis, anaemia and fatigue) and secured their participation with the promise of free healthcare. The men were all left untreated for the 40-year duration of the study, despite the existence of an effective treatment. Many of the subjects went on to die of syphilis, 40 of their wives were infected and 19 of their children were born with congenital syphilis.

“Anti-vaxxers” often use the Tuskegee study as an exemplar of unethical behavior within the medical establishment. Dr Brian Hooker, a bioengineer with a high profile in the anti-vax community, frequently makes this comparison directly. African Americans are 40% less likely to get flu shots than the rest of the population – while this figure is partially explained by wider demographic barriers to healthcare, it does seem that trust in medicine in the African American community has been eroded. Even more alarming is USA Today's recent reporting showing that the perceived parallels between the Tuskegee study and modern vaccination programs may fuel vaccine hesitancy among African Americans when a COVID-19 vaccine becomes available, despite this group’s status as one of the populations hardest hit by the pandemic.

Importantly, while there may be some cultural wariness of vaccination among African Americans, figures show that the group that is most active in spreading disinformation about vaccination, and the most hard-line about opting out, is well off white people. These groups also have a much higher rate of access to healthcare, so the risk from opting out for them in particular is lower. Contrast this with the fact that during the 2017 Minneapolis measles outbreak, the hardest hit population was Somali-American children, and we see the danger and injustice wrought by vaccine hesitancy: by opting out of vaccination programs, groups for whom the risk is comparatively low harm those who have historically been most at risk of medical malpractice, even as they leverage that group’s painful history to spread disinformation that harms them further.

Ultimately when we consider historical public health betrayals we can discern two distinct but related problems. One is the obvious ethical challenge of redress for the populations that have experienced traumatic and palpably unjust treatment inflicted on them by the people meant to protect them. The second problem is an informational one, in that the existence of past injustices can become the basis for future ones.

Neither injustice can be addressed in isolation. Conspiracy theorists such as comfortable anti-vaxxers exploit the mistreatment of marginalized populations to bolster their own arguments and obscure the genuine harm caused by their beliefs. Conversely, those who dismiss all conspiracy theories out of hand allow for the erasure of genuine public health betrayals experienced by exactly those kind of marginalized populations, and help us all to participate in the kind of ‘mass-forgetting’ that often follows government betrayals more generally.

When I say this forgetting has dangerous implications for our information climate today, I mean this: for many people, conspiracy theory communities are the first and only places they hear about the real public health betrayals that have taken place in their countries and communities. The shock of this new knowledge, and the discomfort of not having known it before, is a radicalizing jolt. The feeling of finally having the truth revealed legitimizes the information that is to follow, from the same source; this form of cognitive bias is known as the halo effect. Equally potent is the fact that this realization and the accompanying feeling of having been lied to give birth to the idea that “they,” don’t want you to know the truth, a thought pattern that helps to entrench belief and makes debunking conspiracy theories particularly difficult later on.

The answer, then, is that we have a duty to be honest about public health betrayals, not only those in history but those that continue to this day. Flint, Michigan has had no clean water since 2014 – a story that’s largely slipped from the headlines. A comprehensive confrontation of the injustices that have been done in the name of science and medicine, a confrontation taking place in media, in education and yes, in politics, would mean that the first time most people heard these stories would not occur in contexts that aimed to distort or manipulate them. The victims of public health betrayals deserve to be remembered, not by having their stories weaponized against the very communities from which they come, but through a commitment to radical honesty and accurate historical memory when it comes to public health, and the promise to bring an end to the experimentation they suffered from — and an end, too, to the lies about it.