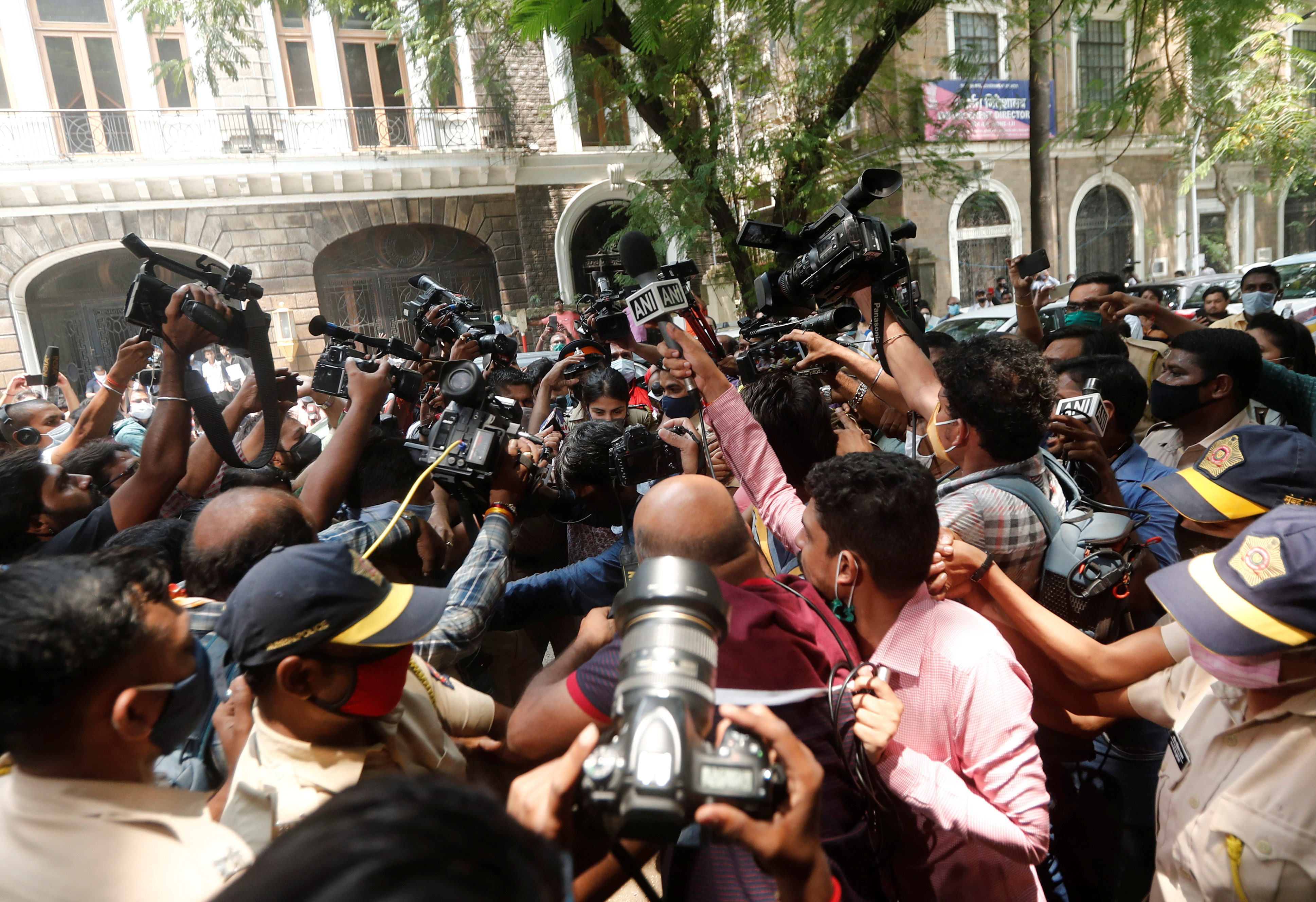 On June 14, when news broke that Sushant Singh Rajput had died, allegedly by suicide, social media was rife with speculations about the ‘mystery’ of his death. In a country where public awareness about mental health problems remains sketchy at best, many people found it unthinkable that an outsider who had managed to make it big in Bollywood – an industry where newcomers from no-film backgrounds find it difficult to make a mark – could suffer from depression. The Mumbai police concluded in their post mortem report that the cause of death was asphyxia due to hanging and that there had been no foul play. But by then social media users were already convinced that Rajput had been murdered, or alternatively that someone could have pushed him to the brink of suicide.

On July 28, the collective disbelief over the actor having taken his own life reached a crescendo when Rajput’s father filed an FIR against his girlfriend, actor Rhea Chakraborty and six others under various sections, including abetment of suicide, wrongful confinement, criminal breach of trust and of having defrauded Rajput of a significant amount of money. After more than two months of a massive, impassioned social media campaign whereby politicians, Rajput’s family and a few other Bollywood actors insinuated that Sushant was targeted by a lobby of influential Bollywood figures and that they could be linked to his ‘murder’, the Supreme Court agreed to hand over the case to the Central Bureau of Investigation.

In these two months, the Indian media, especially television news channels ran a slanderous campaign against Chakraborty - with the result that she was judged guilty by the public even before the CBI had launched a formal investigation. From being called a black magic practitioner to a gold-digging seductress, television anchors held round-the-clock screaming matches filled with misreported facts, misleading narration of contexts and provocative headlines like, “CBI aayegi, Rhea jail jayegi?” (Now that CBI is the picture, will Rhea go to jail?) In fact, Chakraborty was arrested by the Narcotics Control Bureau (NCB) on September 8. The agency claimed Chakraborty revealed during the investigation she procured drugs for Rajput for consumption purposes. NCB Deputy Director General Mutha Ashok Jain claimed no contraband was recovered from her. Prior to her arrest NDTV had reported that the NCB’s case had hinged on the discovery of 59 grams of curated marijuana from two men who allegedly had links with those close to Rajput.

After the CBI took charge over the investigation, another element gained prominence in the media trial - private WhatsApp chats featuring Chakraborty, Rajput and their friends and family were displayed on national television. News anchors held hours-long panel debates hoping to decode WhatsApp messages in a frenzied manner; the exercise would inevitably conclude with the insinuation that Chakraborty was guilty. In one instance, Chakraborty’s message ‘Imma Bounce’ to Bollywood celebrity manager Jaya Saha was aired as a sensational news break by Times Now, which is owned by India’s biggest media house. The channel claimed it had ‘accessed’ her chats and asserted that ‘Imma Bounce’ could be construed as the actress conspiring to bounce a cheque.

In another instance, ‘leaked’ WhatsApp chats between the late actor and his sister made it to prime time debate. The messages allegedly contradicted the claims made by the actor’s family that they were unaware of Rajput’s mental health troubles. Similar rituals of airing private WhatsApp chats of the actress and Rajput’s family, friends and acquaintances were carried out by other news channels including Aaj Tak, Republic TV, India TV, Zee News. What remained constant was all of the channels’ vagueness as to how the chats were accessed. Although the TV channels’ handling of the tragedy was criticized by some sections of the media, with many calling it as a reflection of the entrenched misogyny in society, not much attention has been paid to the newly-coined practice of sensationalizing a celebrity death by airing private WhatsApp chats on national television.

TRPs and a ‘new’ brand of investigative journalism

Section 41 (a) of the Norms of Journalistic Conduct laid down by the Press Council of India, advises the media from adopting practices that could “induce the general public to believe in the complicity of the person indicted as such kind of action brings undue pressure on the course of fair investigation.” However the compulsion to stay ahead in the TRP (Television Ratings Points - the metric by which viewership is calculated in India) race suppresses any considerations of media ethics or privacy.

A former TV journalist at one of the channels which led the media trial against Chakraborty spoke to Logically on condition of anonymity, she explained that private WhatsApp messages that feature in primetime news shows are generally leaked to the channels by investigating agency officials. She said, “It is always the case that agency officials leak it to one channel and it gets circulated. This kind of information cannot be accessed by the channels themselves unless they have permission of the senior officials in the investigating teams of the Enforcement Directorate (ED) and the CBI. Another common way is PR agents of organizations or public figures sharing the chats with journalists close to them to build an agenda.”

Regarding reporters and editors being aware of the possible legal repercussions of sharing private chats of those being subjected to criminal investigations, she said, “All journalists are aware that they should not broadcast such sensitive information but they do not care. They have built a solid audience base, especially in the Hindi heartland states and as long as they are winning the TRP wars, they will not be crucified. In the Chakraborty-Rajput case, there has been a strong push from a certain political group to continue with the media circus so that the audiences could remain distracted from larger issues like the free-falling GDP and the coronavirus crisis.”

Another TV journalist who also requested anonymity corroborated that the chats are leaked by agency officials. She said, “This is a recent trend that reports are published on call logs and WhatsApp chats and the news channels try to brand it as investigative work - which it isn’t.

Alok Prasanna Kumar, a senior fellow at the Vidhi Center for Legal Policy stated, “Whether the news channels accessed the chats by directly or indirectly hacking the phones of the involved parties or the same were leaked by investigation authorities, it is a violation of the law in both cases. In the first instance, it can be counted as a criminal offence under Section 66B of the Information Technology Act, 2000 and a leak by the investigating authorities is a criminal offence under Section 72 of the same Act. Broadcasting private chats on national television amounts to interference in the fairness of trial and obstruction of the course of justice.”

However, categorizing the activities of the press into the broad black and white regions of legal and illegal is tricky. Aritra Das, advocate at ADB and Partners LLP, Delhi said, “It is obvious that media channels have obtained these WhatsApp conversations from the investigation bodies itself. So the question is really not about the legality of actions of the media channels. In the past a lot of scam related exposés were carried out by media houses by accessing ‘classified documents’ protected under the Official Secrets Act. That’s where investigative journalism steps in and the reason why those actions got justified are because the press enjoys a far greater constitutional right of freedom of speech and expression. The magnitude of this right can be gauged by the fact that the courts hardly apply pre-censorship against them. So what do you actually do when a protector actually becomes an abuser? It is more of an ethical issue over legal. So running against the media companies is a futile exercise. Defamation hardly gets proved in Indian Courts. Apart from that, the disclosures are strictly within the companies’ legal rights under Article 19, which grants the right to freedom of speech, no matter how morally objectionable it is.”

Shweta Reddy, an expert on privacy law at the Centre for Internet and Society, emphasized that when we judge the actions of the media organizations, it is important to keep in mind the balance between their freedom of speech and the right to privacy of an individual. She said, “The proposed Personal Data Protection Bill 2019 has certain exceptions for processing personal data that has a journalistic purpose. So the question is was this information necessary in the interest of the public. Specifically with respect to the WhatsApp chats, to determine if this is a privacy violation based on the proposed data protection framework requires facts around who disclosed the data to whom. If the individual whose data is in question released to the media in general, it might not be a privacy violation so long as they weren’t coerced into such disclosure. If it was disclosed only to the investigating agency and it was subsequently disclosed to the media, the much more complicated analysis of what is public interest will need to be undertaken. In the absence of the data protection framework, I think the only way to question it is to approach the courts to determine if the reasonable standard for restriction on privacy has been met.”

‘The onus should be on law enforcement agencies’

Das feels that drafting a new law to tackle this problem is out of the question. “A new law won’t help as this is far too a complex issue where at least 3 constitutional rights are pitted against each other: our right to receive information, the media companies’ right to obtain information and disseminate it, the victims’ rights to get justice, the accused’s rights to informational privacy.”

N. S. Nappinai, an advocate at the Supreme Court of India and the founder of Cyber Saathi suggested fixing loopholes on the law enforcement front through a legal framework is the most plausible option. She said, “When evidences such as WhatsApp chats are being gathered during investigation there is also a responsibility on law enforcement agencies to ensure that confidentiality of such content is maintained in a strict manner. Presently, whenever there have been instances of “leaks” at best and only in rare instances there have been internal disciplinary action against errant law enforcement agencies. What we certainly need considering the expanse of the Privacy judgment of the SC is for explicit law and regulation holding law enforcement agencies accountable for such “leaks”. Since in many such cases it is difficult to identify where such leaks emanate from, the investigating officer ought to be held liable for any breach of confidentiality of the documents and details collected through investigation.”


If these steps are not taken however, what will be the effect on other such cases in the future, and on the relationship between Indian media and the legal system more broadly? Nappinai’s prognosis is grave: “If there is no such accountability, victims will simply avoid seeking redress, as they have and will lose faith in sanctity of systems.”

On September 14, a lawyer named Vibhor Anand published some big “revelations” on his Twitter account. His account is now suspended, but not before Anand told his 87k followers that the Bollywood elite is involved in drug and child trafficking. Anand...