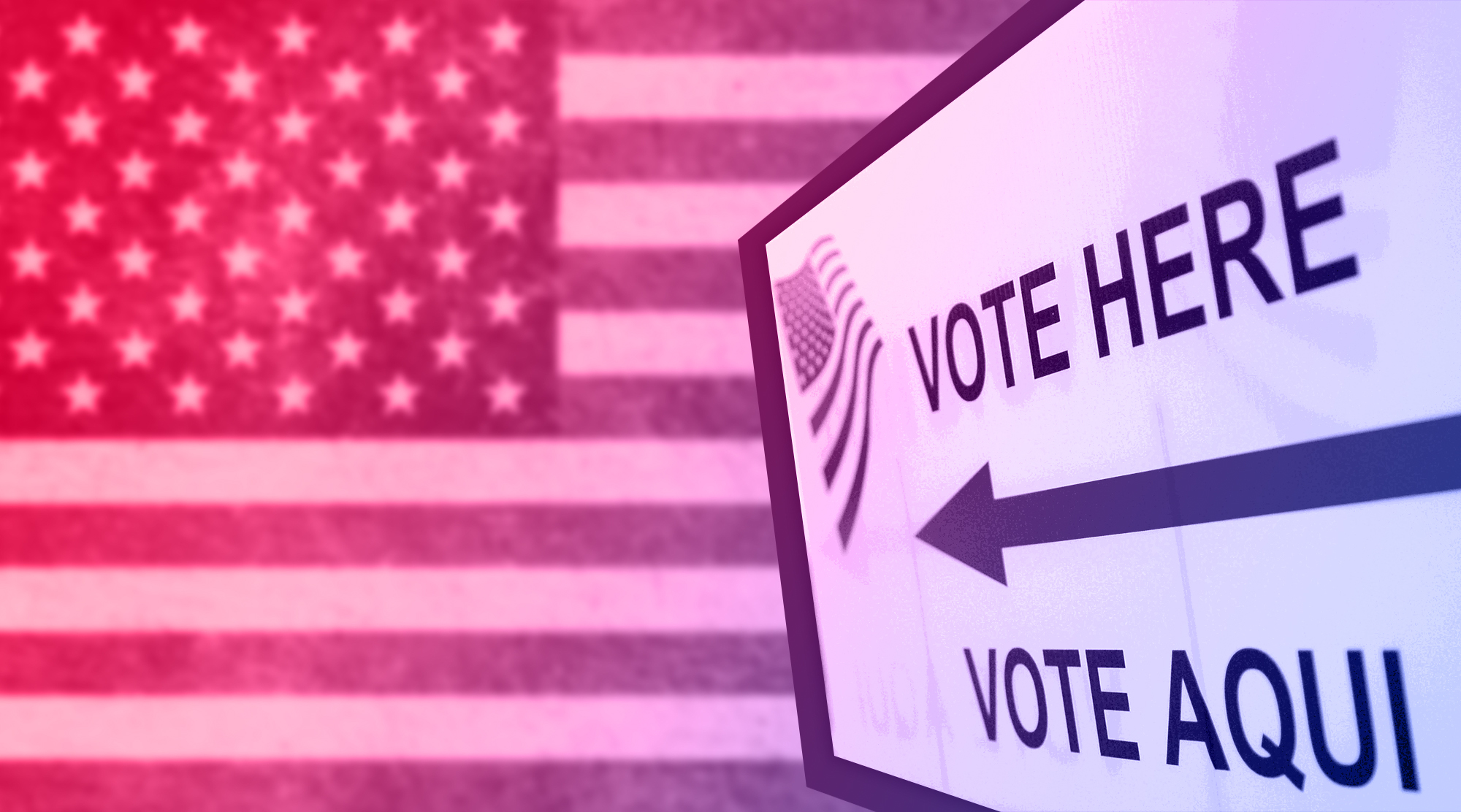 By Alice Franklin and Ishaana Aiyanna

In January this year, Vice President Mike Pence addressed an audience of Latino churchgoers in Kissimmee, Central Florida. Speaking to a few hundred people, Pence spoke largely about religious freedom and abortion rights, claiming that “President Donald Trump is the most pro-life President in American history.” Whether or not this descriptor is appropriate for Trump is hard to verify. However, it is unsurprising that Pence elected to speak about abortion rights, in particular to a Latino audience.

It is no secret that winning both the support of the state of Florida and the booming Latino population can be key to winning a presidential election. Florida is the state with the third-largest number of Latino voters, and though the scale of anti-abortion sentiment among Latino voters is exaggerated—most Latinos in the U.S. support abortion rights—the myth prevails.

Unlike President Trump, both President-elect Joe Biden and Vice President-elect Kamala Harris have taken strong stances in favor of abortion rights. On several occasions, Harris in particular has voiced her support for the right to choose an abortion, as well as for government funding for such provisions. Biden and Harris’ views have been misrepresented on social media. In particular, one claim about the Democratic candidates supporting aborting fetuses “minutes before birth” has been widely circulated on Facebook. According to NBC, a picture of a crying newborn along with photos of Biden and Harris were accompanied by text that read “these candidates support an abortion five minutes before birth and if it survives the abortion, they approve of killing the baby." 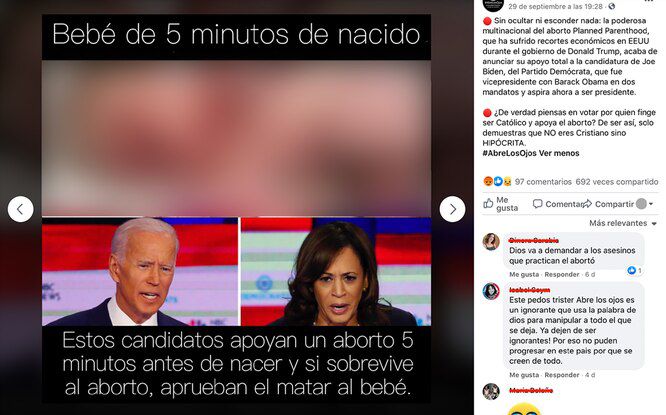 A picture of a newborn (blurred out) next to a picture of Biden and Harris. The accompanying text claims they support abortion five minutes before birth. Image from La Republica.

Both Logically and Snopes have fact checked this claim, and both have found it to be misleading. Neither Biden nor Harris has ever stated what they think the cut-off point for aborting a fetus should be, nor that their opinion on the matter is all that important. Biden has only stated that he wants to protect a woman's right to choose whether to have an abortion. Harris has only said that there shouldn’t be a ban on abortions past 20 weeks, and that being from a lower socio-economic background shouldn’t prevent you from accessing an abortion. Nevertheless, La Gran Época—the Spanish-language version of the far-right and conspiracy-driven news site The Epoch Times, repeated the claim, as did ACI Prensa.

ACI Prensa is a Catholic news network with over two million likes on Facebook. They have been crucial to the spread of abortion-related disinformation before the election. In August, they re-published an article from the National Catholic Register titled “14 Facts Every Catholic Needs to Know About Kamala Harris”.

In this article, they stretch the definition of “fact” by using sensationalism and exaggeration to distort the Vice President-elect’s views. ACI Prensa claim Harris supports abortion during the whole pregnancy, even at the moment of birth. There is no evidence for this, indeed it makes little medical sense, as many abortions carried out after 24 weeks are done in order to prevent the mother from having to carry an unviable fetus to term.

On 13 October, Emmanuel Rincón, a Venezuelan writer for the conservative Spanish-language website El American, posted the below tweet about Biden and Harris. 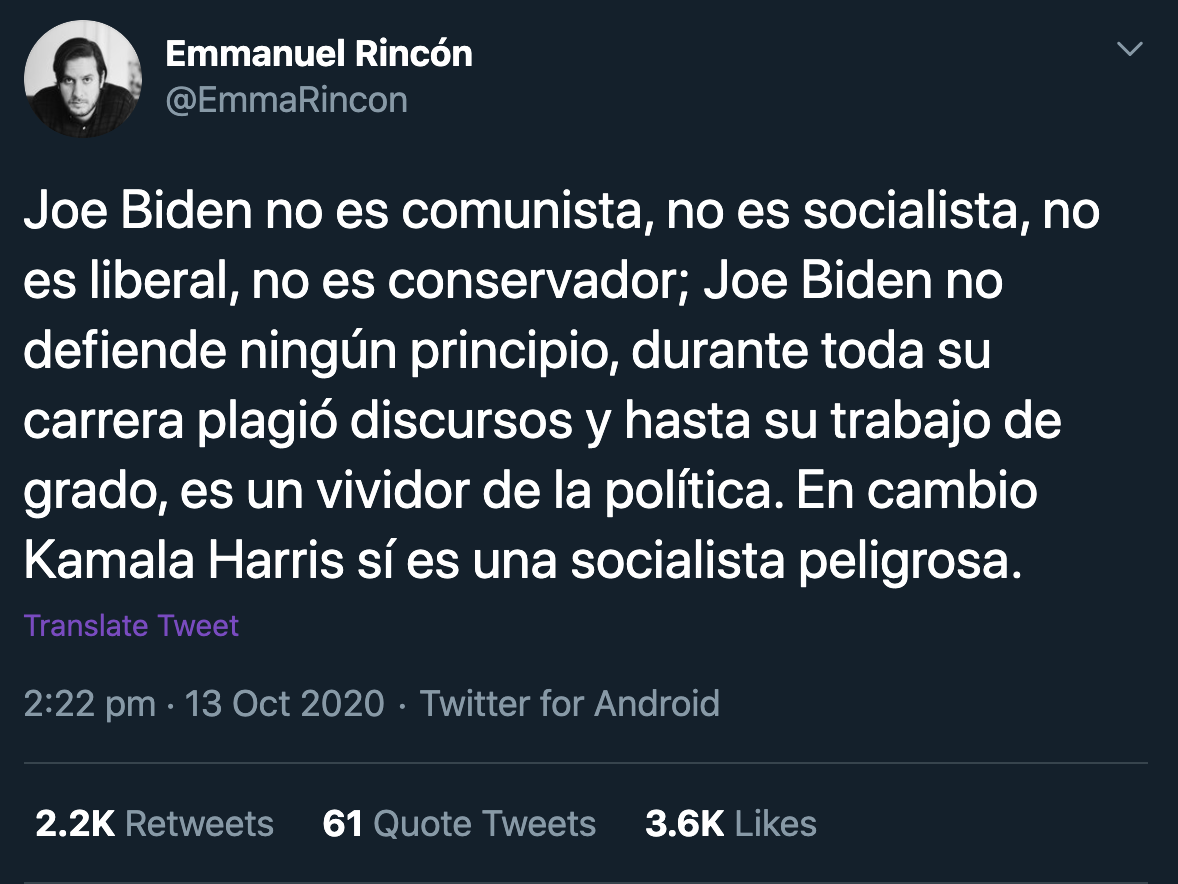 Rincón’s tweet addresses something both Spanish and English language news sites have been making much of—whether or not Biden and Harris are socialists. According to Rincón, Joe Biden is not a communist or a socialist but Harris is. Biden, Rincón claims, is a plagiarist who stands for nothing. Rincón’s tweet dominated the conversation that day, garnering 2.2 thousand retweets. Rincón has also spread other conspiracies: one about the WHO covering up COVID-19, and one that claims wide-spread electoral fraud took place in the Presidential Elections.

Senior Republican Party members—including President Donald Trump himself—have also been eliciting a fear of socialism. In May 2020, a Spanish-language article that appeared on Trump’s website claimed that the Cuban government wanted Biden to win. Trump’s article linked to a France 24 article, presumably as evidence of this assertion. However, the France 24 article does not explicitly back up the President’s claims. Instead, it simply reports that a Cuban diplomat thinks Trump’s actions have been detrimental to his country. Nowhere does the France 24 article mention Joe Biden.

In October, Marco Rubio, the Republican Senator for Florida—claimed on Fox News that “both in Caracas and Havana, the dictators [Nicolás Maduro and Raúl Castro respectively] are hoping that Joe Biden wins and Donald Trump loses. It is their only way forward.” 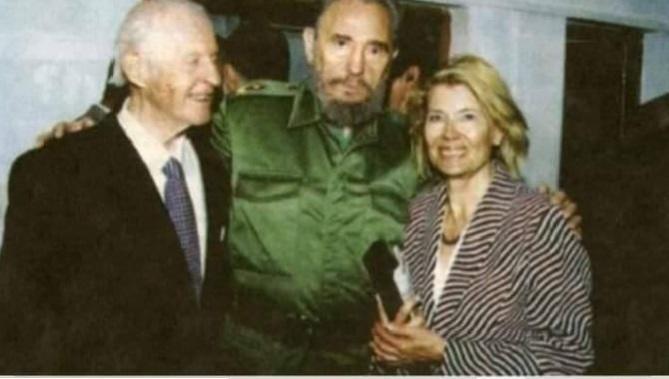 Photo of Fidel Castro standing next to Jacqueline Beer

Additionally, a photo circulated on social media shows Fidel Castro standing next to a man and a woman. According to some Facebook users, this photo shows Jill Biden—the wife of Joe Biden—with the former Cuban dictator. But the woman depicted is not Jill Biden. The image is actually of Castro standing next to actress Jacqueline Beer and her husband, the late Norwegian explorer Thor Heyerdahl. False narratives like these, which are often left to proliferate, unchecked, on social media, aim to capitalize on the ill-feeling towards left-wing governments felt by some in the Latino community within the U.S., many of whom moved there to avoid living under the left-wing governments of their countries of origin.

On November 7, conversation about Biden and Harris’ socialist credentials again spiked on Twitter. This time, the spike centered on a tweet by a radio host who denied that Biden and Harris were socialists and mocked those who thought that they were. Another tweet from Kirk Acevedo, an American actor, shows him asking his fellow Latinos to make America great for all Americans, not just the white ones. He lists the times Trump has made derogatory remarks towards Latinos, as well as the President’s mishandling of the COVID-19 outbreak. This shows that—while it is tempting to make generalizations about any voter demographics—the views of Latino voters are diverse, and the “Latino Vote”, as it is so often dubbed, is not a monolith to be swayed one way or the other.

A final narrative uncovered by our investigation is exemplified by #BidenPedofilo, a hashtag that implies Joe Biden is a pedophile. While at first glance, this hashtag seems likely to be QAnon adjacent, the content posted under the tag is more related to images of the President-elect apparently acting inappropriately towards young girls, by kissing or touching their hair in public. In 2019, Biden released a video acknowledging these instances and committing to being “more mindful about respecting personal space in the future.” While these encounters may appear uncomfortable, there is no evidence implicating the President-elect in genuine pedophilia.

Those behind the hashtag campaign, however, are keen to seed this claim, and not only through organic mentions. Analysis from Zignal shows that the hashtag’s spread has been aided by “coordinated inauthentic behavior” (CIB), that is, bots created to reinforce disinformation narratives. The picture below shows the spread of the hashtag, with a range of engagement from accounts with both high and low automation scores. Accounts that score higher for evidence of automation (i.e. accounts that are more likely to be bots) are darker shades of pink, and those with lower scores appear lighter.

Below is a Gephi visualization. Each color shows a slightly different permutation of the #BidenPedofilo conversation, and the center is Emmanuel Rincón—the writer who was spreading conspiracies about Harris’ alleged socialist credentials. Though Rincón himself has not used the #BidenPedofilo hashtag, or mentioned the subject matter explicitly in his tweets, it is clear from the visualization that he is at the center of a web of users who do. Rincón is one example of a power user linked to various disinformation narratives within the Latin American community. Such users play a role in either explicitly driving disinformation narratives, or allowing other like-minded users to cluster around them, interacting and building connections within the disinformation ecosystem. Users such as this one also show the importance of a veneer of credibility within this community, whether that’s conversations clustering around slickly branded, high-follower accounts such as Rincón, or narratives that depend on a kernel of truth, but veer into distortions and exaggerations. 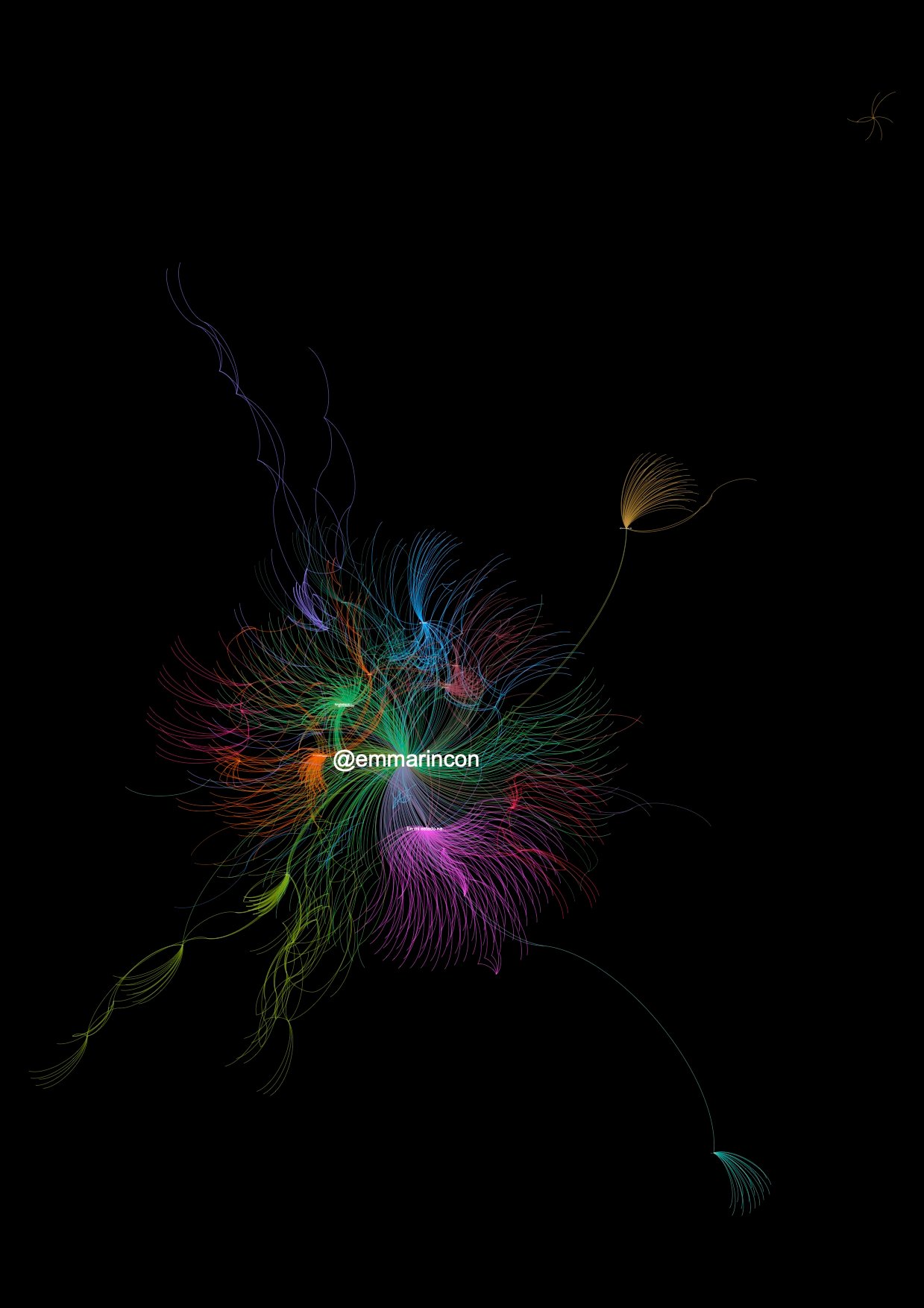 For the most part, the disinformation shared in the Spanish language is based on these exaggerations and distortions of reality. Biden is certainly to the left of Trump, but claims that Biden and Harris are socialists are misleading, as is the claim that Biden’s son is a Communist. Biden and Harris have demonstrated support for legal abortions throughout their careers, and this too has been distorted into the claim that they want to abort babies during birth. Likewise, Biden’s behavior around women and girls has been called into question many times, but the claim that he is a pedophile is unfounded.

It would be unproductive to speculate whether this disinformation swayed Latinos to vote one way or the other. What we do know is that during the 2020 election, disinformation—which often has taken the form of exaggeration and sensationalism—has been prevalent in the Spanish-language media in the run-up, during, and after the Presidential election.

What’s more, social media platforms are doing little to stop it. With algorithms optimized for English, labels emblazoned with “fake news” or “misleading” might sometimes appear on dubious English-language posts, but labels declaring “noticias falsas” or “engañoso” on dubious Spanish-language posts do not. Clearly, it is time that “la desinformación” was taken as seriously as disinformation.

Get Off My LAN: Why Generational Differences Matter Online

For years now in our political discourse, a generational conflict has been raging. Typically, the lines of this conflict have been drawn as follows: ageing, moneyed Boomers – beneficiaries both of the post-war welfare state growing up, and the...