Theories in Flux: The Twitter Hack According to QAnon

The digital world is still reeling from last night’s audacious Twitter hack which left dozens of high profile accounts tweeting a simple “send $1000, get $2000 back” Bitcoin scam. As an immediate measure to prevent the scam from spreading, Twitter prevented “blue-tick” verified accounts from tweeting until they had addressed the hack. 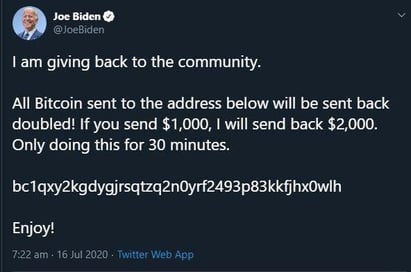 The attack first targeted multiple cryptocurrency exchanges and figureheads before pivoting to influential politicians and celebrities. A host of smaller accounts were also affected. Names include:

In addition, the hackers posted pictures of Twitter’s backend administration systems, causing much speculation about the amount of power over users’ tweets residing in the Twitter offices.

Despite the potential for having a devastating effect on online discourse, security officials have called the attack “effective but amateurish” – indicative of individual actors over a state-backed campaign – and that it was sheer luck that they chose to run a scam rather than cause any further chaos. The attack has been referred to as an “unusual hack [but a] common scam.”

However, this emergent and high-profile event has left one online community in disarray. Those that follow the QAnon narrative have been left adrift as the major attack had not been prophesied by Q, leading the community to look to each other to make sense of last night’s events through their lens. This is not the first time a global event has caught the community by surprise. Q’s first post regarding COVID-19 was on March 23rd, attempting to back up Trump’s defence of the term “China virus” earlier that month, before finally getting into full deep-state swing from May 2nd.

Taking a snapshot of the conversation around the hack as it stood this morning revealed that conversations were beginning to circulate around #qarmy, #WWG1WGA, and other related QAnon hashtags (indicated in orange and blue), while general conversations around the event or bitcoin still dominated the platform (represented in purple and green respectively). 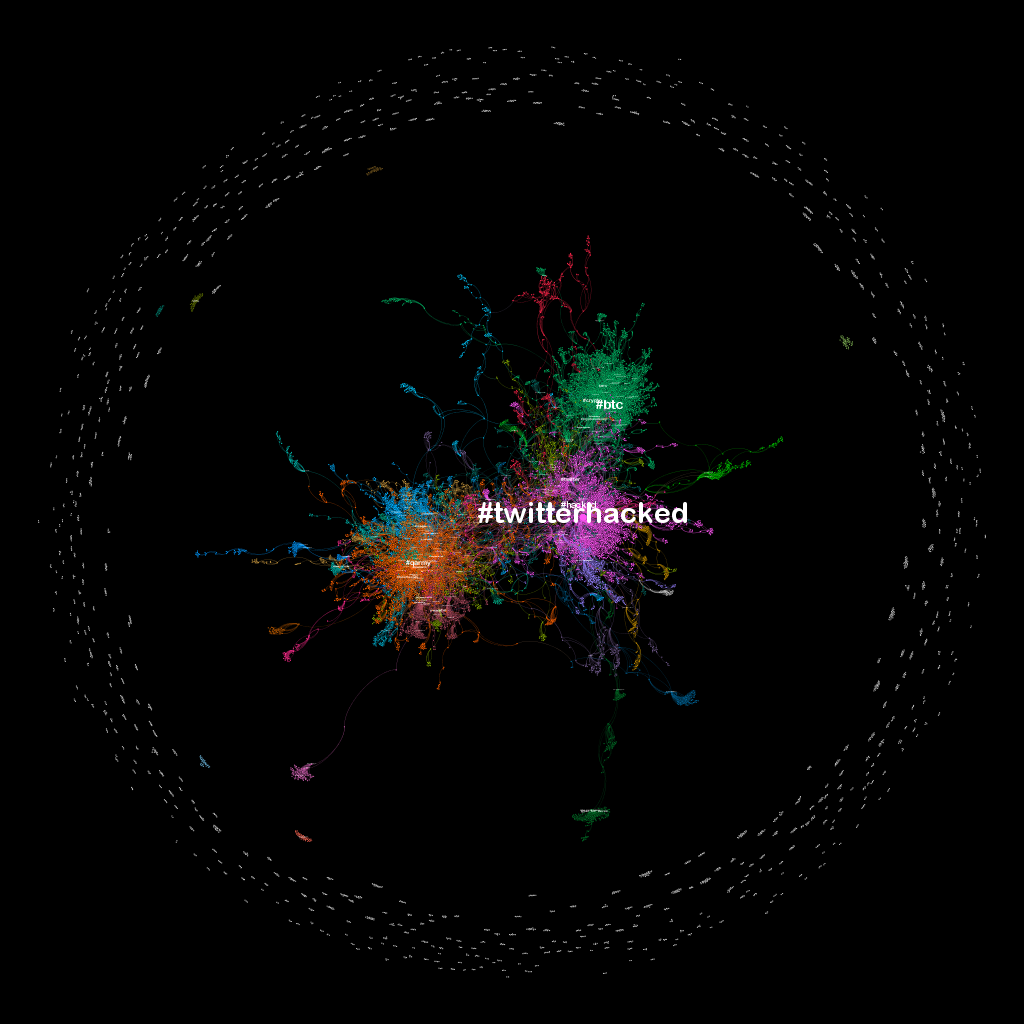 Diving in further at a granular level revealed insights into QAnon’s process when a sudden large-scale event takes place that isn’t first mentioned by Q. Theories about the hack are still yet to settle into any cohesion with the general QAnon narrative, but the fact that the accounts affected include a number of names believed by Q followers to be part of a satanic child-trafficking cabal has given them plenty of material for what may be the most paranoid improv writing group on the Internet.

QAnon supporting power-user Julian’s Rum adjusted and speculated on the hack a number of times throughout the night, with input from his 143.4k followers. Initially, due to limits on verified account tweets impacting the tweeting capacity of Donald Trump, he sought to blame CEO of Twitter, Jack Dorsey: 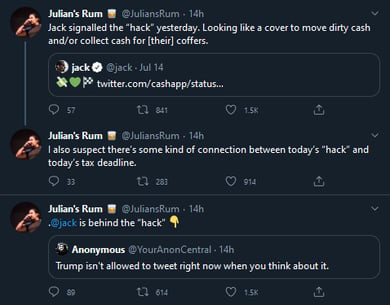 He then built on this, suggesting that Chrissy Teigen signalled the hack by using the term “block chained” – which probably has more to do with her repeatedly blocking QAnon followers due to repeated harassment than her acting as the starting pistol for a major security breach. 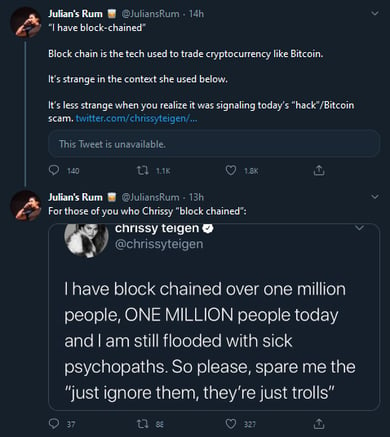 Julian’s Rum then speculated that Trump and Q were behind the attack. He pointed to coincidences with post numbers and dates that allegedly gesture towards Q’s involvement, and an announcement by Trump on Facebook that mentions tech strategies indicates his acknowledgement or masterminding of that plan. This shows an important piece in the QAnon puzzle - going back over older posts by Q in order to retroactively get them to fit into an event, no matter how tenuous the connection. Julian’s Rum’s tweets are still going strong and are being liked and retweeted. 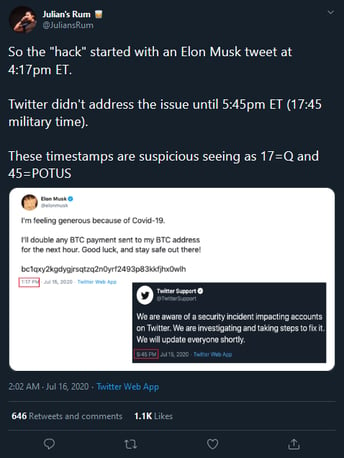 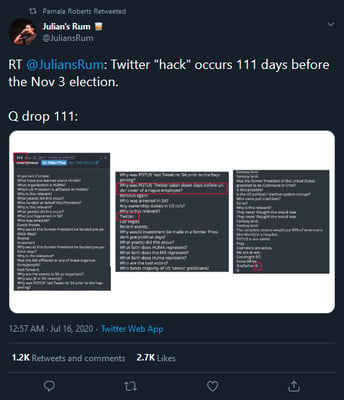 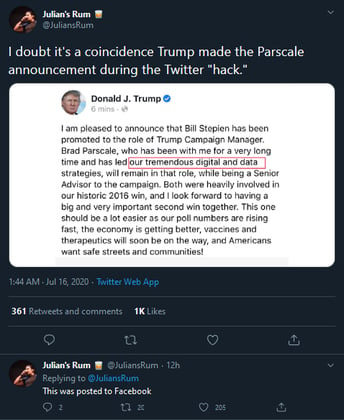 Interestingly, this last theory appears to drop the Bitcoin angle entirely. That thread is picked up, however, by LadyWarAnon (53.5k followers) in a conversation with “Aussie Patriot” N1_Nasty_1. The former speculates that the hack is a pre-planned excuse for “when incriminating evidence” is found on affected accounts. LadyWarAnon replies with apparent knowledge of a Bitcoin order for adrenochrome (the cabal’s drug of choice, harvested from children) just before the hack. 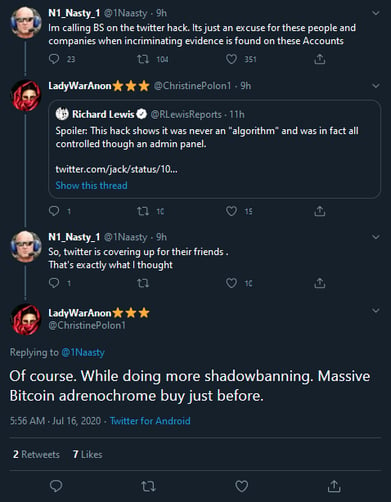 Moving on to Parler, Twitter’s ‘free-speech’ cousin, the rumour-mill churns further. User MimosaMandy echoed LadyWarAnon’s theory that the hack is an operation to cover for sinister activities. 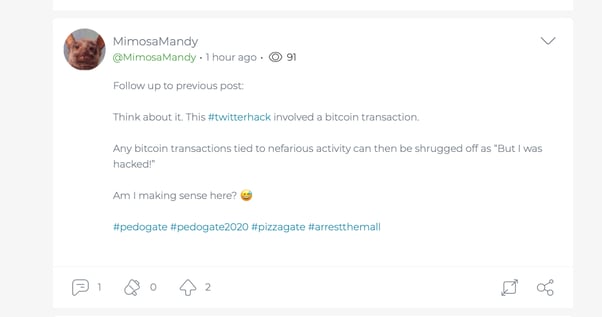 MarioDaMan addressed the leaked screenshots of Twitter’s backend tools, remarking on the blacklist function and how it is supposedly racist. In addition, he suggests the rather quaint theory that the hack is, in fact, a funding drive for AntiFa. Important to note in these parleys is the shotgun approach to hashtags, tying in the Wayfair conspiracy (more on that next week), Brexit, Coronavirus, and Biden’s presidential campaign. 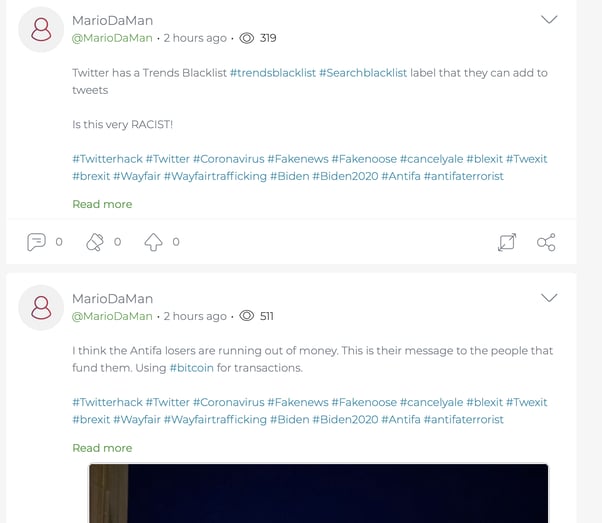 So there you have it. The hack was a cover for members of the cabal who are using Bitcoin to buy adrenochrome while raising funds for AntiFa. It was masterminded by the CEO of Twitter and the signal to begin was given by Chrissy Teigen. In addition Q and Donald Trump were behind the whole thing, giving us clues in timestamps and post numbers.

We will be following this story as it develops. We have no doubt that over time, a common consensus in the QAnon community will develop about the hack and who was behind it. How closely that aligns to reality remains to be seen.