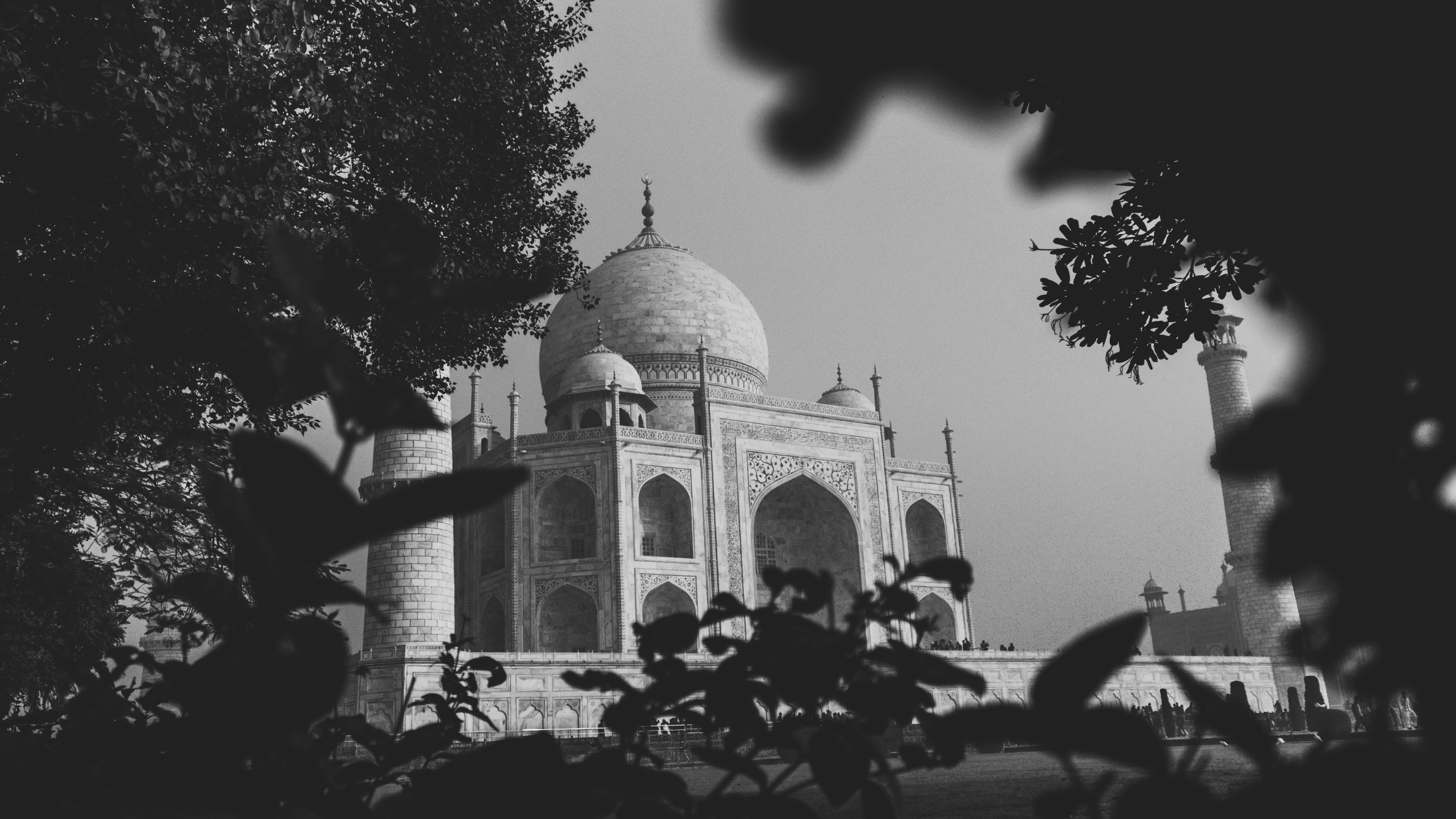 In his five-part blog series, ‘The Ruckus over the Taj Mahal’, Indian Historian and UCLA professor Vinay Lal writes that “[h]istory as we know it is nothing without the Promethean struggle against myth.” The Taj Mahal, a UN World Heritage site, was built in 1632 by Mughal Emperor Shah Jahan in memory of his beloved wife Mumtaj Mahal. The mausoleum has often been romanticized as a symbol of love and a celebration of Mughal Architecture in India. Built in white marble on the banks of the river Yamuna, the monument raises the most tourist revenue in India, recording at least 6.9 million visitors in 2018. The myths and narratives around the Taj Mahal are endless. Among these, a famed story is that of the craftsmen’s hands being cut off on orders from Shah Jahan so they would be unable to replicate its beauty. Without evidence, they are what they are: just stories.

In the last seven to eight years, a thirty year old myth about the Taj Mahal has started to resurface (as seen in this video widely circulated on Facebook and Whatsapp), often accompanied by clickbait-y headlines such as “Shocking evidences of why Taj Mahal is a Hindu Temple” or “Tejo Mahalay: The Secret of Mankind”. The origins of the content covered in this video come from the founder of ‘The Institute of Rewriting Indian history,’ a certain Mr. Purushottam Nagesh Oak. Founded in 1964, the institute did exactly what its name says. Along with his 200 odd colleagues, P.N Oak managed to print booklets on his theories that all had a common theme: the disambiguation of Vedic culture by the West and Islam together. According to him, the word Christianity is derived from “Krishna-neeti” and the Kaaba in Mecca was originally a Hindu Temple. Among the most famous in his arsenal of conspiracy theories is the one contending that the Taj Mahal is a Hindu temple, or Tejo Mahalaya. To this end, in 1989, he self-published a book ‘Taj Mahal: the True Story’ and has printed hordes of pamphlets on the subject. To legitimize his claim, he even approached the Supreme Court of India in 2000. The judges dismissed the petition with the pithy response: “Somebody has a bee in his bonnet, hence this petition.” P N Oak died in 2007; during his lifetime neither he, nor his theories, attracted much attention. However, the internet in its present form, along with a lot of help from political propagandists, have given the theories all the impetus they need. 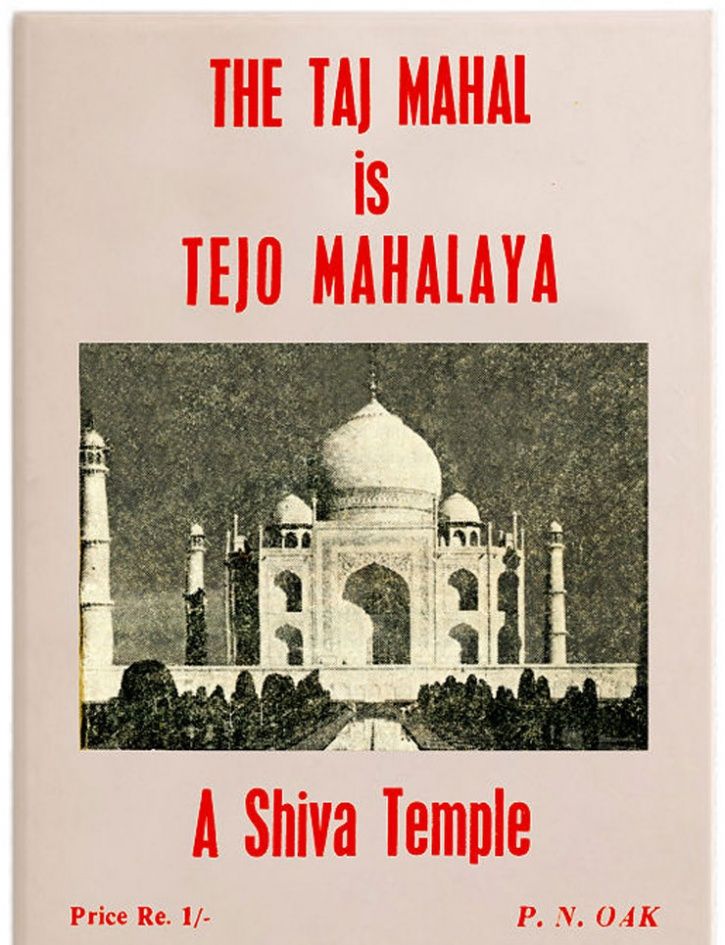 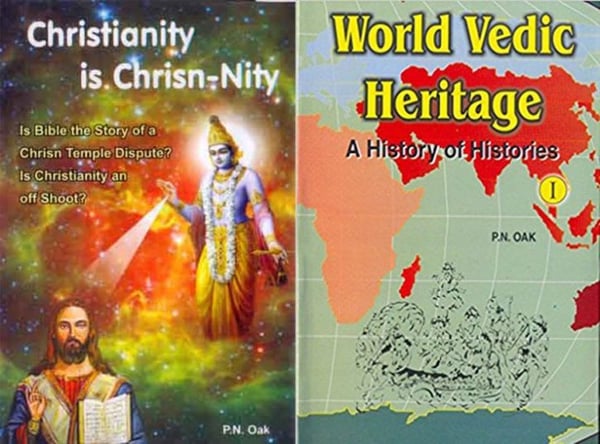 In 2015, 2017 and in 2018, courts in Agra and other parts of Uttar Pradesh received petitions along the same lines: to declare the Taj Mahal a Hindu Temple, with some petitions even filing on behalf of the Hindu deity, Lord Shiva. Some of these petitions ask for the temple to be renamed Tejo Mahlaya, while others favour Tej Mandir or Agreshwar Mahadev. The other significant difference in these petitions and the one filed by P N Oak in 2000 is that some lower courts have admitted the petitions, and the Archaeological Survey of India (ASI), charged with maintenance of heritage monuments, has repeatedly debunked these claims stating that there is no evidence of Taj Mahal ever being a Hindu temple and that any such claims were ‘concocted’ and ‘self-built.’

Despite these elaborate proceedings, on the internet and elsewhere, there seems to be a small but increasing consensus that the Taj Mahal is indeed Tejo Mahalaya or Tej Mandir.  The Taj Mahal appears on Instagram geotagged as a ‘Tejo Mahalaya’ Hindu Temple, another attempt to reinforce these false claims.

Websites maintained by fringe Hindutva groups are dedicated to popularizing this theory. If anything, they are further amplified as it helps in the cause of revisionism where erasure of an Islamic and colonial past makes for the faster establishment of a Hindu Nation with a glorified Vedic past. Politicians and ministers from the BJP have repeatedly reiterated this theory, and on 24 July 2020, Kapil Mishra tweeted the same while citing Kreately, a propaganda website, as a source.

In 2018, Amit Shah, the present Home Minister of India told a gathering of BJP social media volunteers that “We are capable of delivering any message we want to the public, whether sweet or sour, true or fake. We can do this work only because we have 32 lakh people in our WhatsApp groups. That is how we were able to make this viral.”

The Home Minister is correct: when something goes viral, whether true or fake, it can strip us of the chance to question its veracity. In psychology, this is known as the illusory truth effect, where a lie - if repeated often enough - begins to be believable. In the digital age, this is as easy as duplicating a message or building on an existing narrative, pushing it over and over again to legitimize it. According to researchers, Knowledge may not protect against illusory truth. It was found that a repeated statement is easier to process and is perceived as more truthful than new statements.  This working of the illusory truth effect makes it a very successful method in political disinformation propaganda.

Throughout history some monuments have been plagued by contentious statuses, either as products of political regimes or religious significance. One such monument is the Hagia Sophia, another UN World Heritage site in Istanbul, which both Christians and Muslims claim as a place of worship. Only earlier this month, after 86 years of being a museum, did the Hagia Sophia revert to become a mosque, though it was once a cathedral. A similar conflict took place in India, with court proceedings spanning over two decades to decide on the disputed land where the demolished Babri Masjid mosque stood, a location that was also claimed by Hindus as the birthplace of the deity Rama. The Supreme Court of India decided last year that there was evidence of a temple and preparations are currently underway to begin construction of a Ram Temple.

The case of the Taj Mahal is quite different. This is a disinformation campaign designed as an alternative narration of history with absolute disregard for facts and evidence. Though repeatedly debunked by the ASI, the dogged repetition of the narrative means it runs the risk of sedimenting into “truth” for many people. Once an emblem of undying love, The Taj Mahal has become yet another symbol of the Sisyphean struggle to keep the truth from being drowned out by disinformation.

Why the U.S. Economy Won’t Be Re-opening by Easter

As the U.S. tries to contain the spread of coronavirus, concerns about the economic cost of the shutdown are growing. In a press briefing on Monday, Donald Trump stated that the U.S. “cannot let the cure be worse than the problem itself” and later...

No, Houseparty Probably Won’t Give You a Million Dollars

Houseparty, the “face-to-face social network” app, has had a tumultuous few weeks. Initially exploding in popularity by allowing those in self-quarantine to join a virtual room with their friends and play games and quizzes with their phones or...