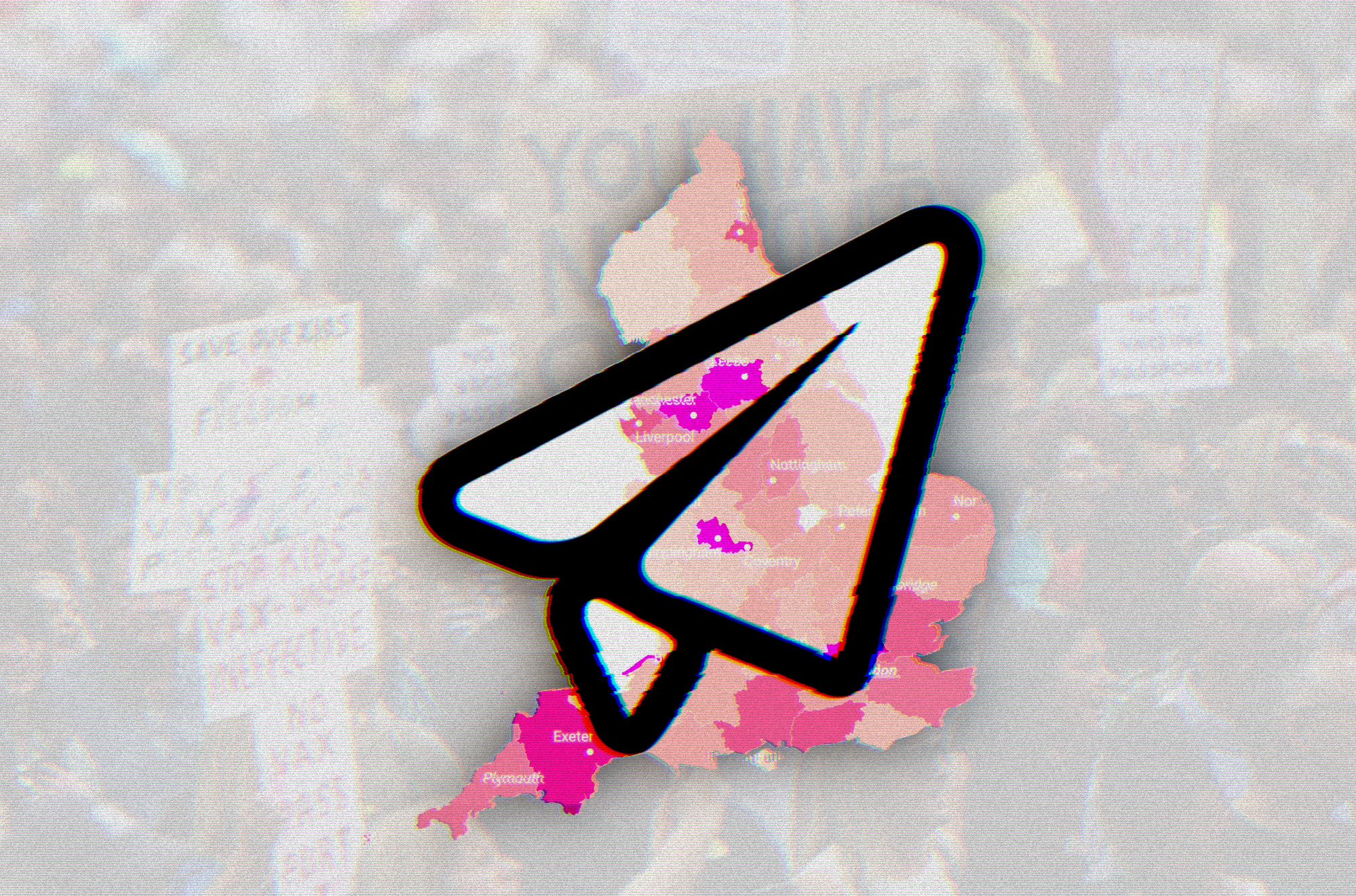 By Jordan Wildon and Joe Ondrak

In a first-of-its-kind analysis of COVID conspiracy groups and channels on Telegram in the U.K., Logically found there were 222,713 unique member accounts, of which only an estimated 20 percent actively participate in conversation. These findings undercut the bold claims of being “the 99 percent” that anti-COVID-vax conspiracy activists often make; instead, group membership on Telegram makes up just 0.32 percent of the U.K. population.

Across 427 Telegram chats arranged in 13 distinct networks based around different campaign groups, Logically found a total of 274,989 aggregate members. Only around 222,713 can be estimated to be unique accounts, 20 percent of which are members of multiple different groups. Analysis of messages in a random sample of 40 of the analyzed chats found that only 20 percent of users had posted more than ten times, showing that influence within these communities is controlled by a significantly smaller number of people.

The organizational structure of these 13 networks follows what Logically is calling a “hub and satellite” formation, where a small group of administrators control a national “hub” chat, as well as up to 80 smaller regional “satellite” chats. These networks are arranged around various personalities and named groups who organize offline activity both independently and together, but they frequently crosspost content to each other, creating a mishmash of conspiratorial thinking.

Rather than being a silent majority, these findings indicate that a small but coordinated series of networks inflate COVID conspiracy rhetoric to artificial prominence. The findings also help to explain why so many offline events feature the same people, despite such events happening up and down the country.

Breaking down hub and satellite groups

To assess the size and scale of networked COVID misinformation groups on Telegram, Logically analyzed 427 chats identified as being set up with this hub and satellite organizational structure. For example, the Great Reopening network operates at least 77 groups, including a central hub chat that focuses on nationwide appeal, bringing together users from across the U.K.

These central hub chats usually contain a large number of members and a team of admins and moderators who are close to, or the same as, the central team behind the group. The hub chats are very active, and crossposting can boost individual pieces of content, narratives, or even fringe groups to new audiences. Generally speaking, these hub chats siphon people off into localized groups for community organizing, including protests, flyering, and other direct action.

Hub chats offer mass distribution of posts, new iterations on narratives, and are an effective method of rapidly disseminating messaging to a high readership. Due to overlapping readership between major hubs, key messaging can quickly cover large parts of the overall U.K. COVID disinformation Telegram network. Usually, this includes sharing livestreams from U.K. protests, posters for higher-profile events (particularly those organized in London), and articles from conspiracy-focused outlets (such as those from The Exposé or Disclose.tv). Hub chat activity is often a good indicator of whether a piece of content or narrative will spread away from Telegram to other platforms.

Satellite chats spinter off from hub chats. Rather than being national in scope, satellite chats are regional with a smaller membership. Admins and moderator teams are also smaller. They may consist entirely of members specific to that region operating as a chapter, or include a member of the hub moderation team if the chat was set up centrally first. Satellite chats are where regional offline action is coordinated, though they may be forwarded to the hub chat to boost reach. These chats often receive the same crossposted messaging that appears in hub chats, but also focus on local issues, smaller protests, and non-capital or nationwide activism. Other direct action strategies are discussed on a smaller scale, as well as recruitment methods.

In total, we identified 13 such hub and satellite networks. One further network was not broken up by location, but by job roles in a self-styled “alternative to the NHS.” This network had satellite groups each dedicated to topics including but not limited to midwifery, holistic and alternative practices, and one containing anti-COVID-vaccine and conspiracist mental health professionals.

To establish levels of activity across the network, Logically conducted analysis on a random sample of 40 groups with a total of 49,836 aggregate members. In total, 37,059 accounts had posted 638,581 messages across any of the chats since their creation. Of those, around 20 percent posted more than 10 times across the sampled chats. 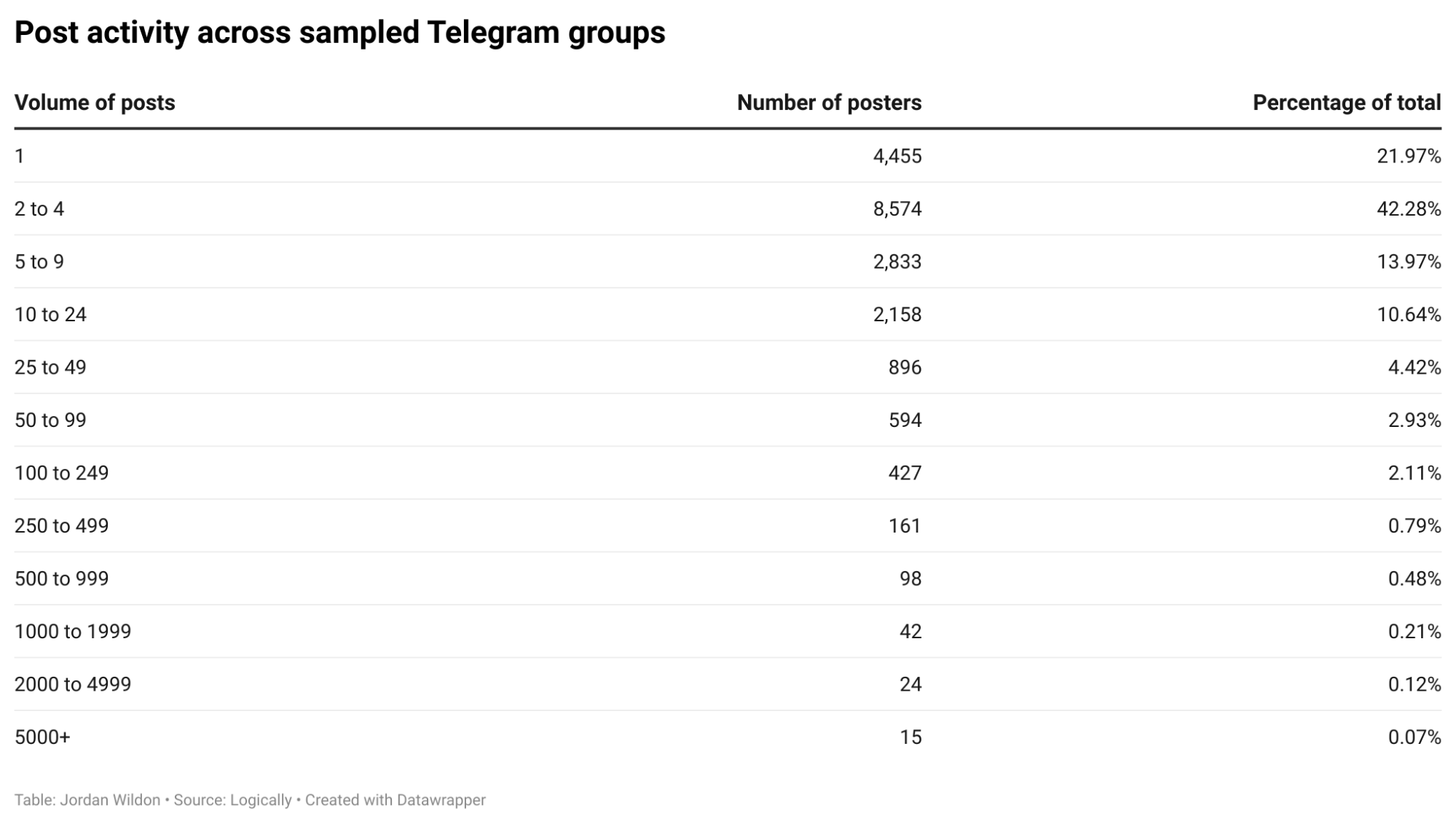 Finally, to establish the distribution of membership of these groups across the U.K., 152 local satellite groups were assessed for unique members. In total, these groups contained 44,914 when broken down by region and 37,204 unique members across all local groups.

As analysis of regional breakdown is based on aggregate members, not unique members, London appears to have a higher number of members. This could be both to do with the higher population of the area relative to other counties, but also due to members of groups in other counties being members of London groups for the purposes of organizing and attending protests in the capital.

Chats for Scotland (2,451 aggregate members), Wales, (1,726), and Northern Ireland (1,094) were broken up by country, not region, by the chat creators and are therefore omitted from the localized analysis.

At least 216 groups were too small to analyze (fewer than 100 members), therefore a ratio of aggregate to unique members was calculated based on what percentage of members in a network is unique. For a sample of five such networks, including 148 groups, 80.99 percent of the members are unique. As a result, the 99,363 aggregate figure equates to 80,470 unique accounts which were members of two or more of the groups.

On Telegram, chats are broken up into two core categories: channels and groups. Channels resemble newsletters – a small group of admins choose what to post and send to their followers. Groups are more like chatrooms. These can contain up to 200,000 people and the vast majority of them allow all users to post messages to the chat.

In some cases, groups require their members to complete a captcha or another form of verification to be able to post. While this can inflate the number of users who appear to have posted at least once in a group, it also offers a high degree of certainty that accounts in those groups belong to actual people, as opposed to bot accounts.

Of the 427 chats assessed by Logically to establish a baseline figure measuring the size of COVID conspiracy networks on Telegram, user-level data was gathered for 152 groups. Total members for the entire network were listed to gauge unique accounts nationwide, as well as unique accounts per region.

The analysis was conducted using data from Telegram’s API. Complete archives and member lists of the chats assessed were gathered, allowing for the breakdown of user activity, total members and a broad overview of narratives and discussion points within the groups.

Theory of Structure and Narratives

The shape of Telegram itself has had a huge impact on the shape of the U.K. COVID disinformation space, as has the history of the movement’s key narratives from its initial roots in 2020.

The various conspiracies, old and new, that inform the Freedom Movement can best be understood in terms of the “Cultic Milieu”.

Early on in 2020, the Electromagnetic Hypersensitivity (EHS) community and those speculating about Bioweapons would set the narrative for what COVID was — with nuance and variation depending on individual stances. David Icke’s interview with London Real in March that year and its subsequent removal from YouTube also fuelled early conspiracies and explanations for the pandemic.

The exporting of QAnon wholesale to the U.K. via the #SaveOurChildren hashtag allowed for their particular mix of “pedophile, satanic deep state” meta-conspiracy to serve as an epistemological frame for COVID. This could explain why we now see Jeanette Archer’s “Satanist Hunter” group spreading messages across COVID Disinfo Telegram, and why being a pedophile or “pedo protector” are common insults thrown at police at what is largely anti-covid-vaccine and anti-lockdown protests. This also helps inform the distinction between anti-vax and anti-COVID-vax ideologies.

The development and rollout of vaccines allowed for a further pivot on narrative development, allowing the pre-pandemic anti-vax movement to appeal to a new audience. Conspiracy  theorists leveraged historical medical malpractice to encourage a new wave of vaccine hesitancy, which acted as an on-ramp to more radical conspiracy beliefs, including the adoption of QAnon and Sovereign Citizen conspiracy theories.

The “free space” of the cultic milieu encourages believers to remix worldviews informed by different conspiracies. However, after platforms cracked down on QAnon and COVID disinformation, the rise of Telegram created a microcosm with fewer boundaries between groups and ideologies, with a far more rapid form of dissemination between them at both a national and international level.