The Social Media Strategy Behind the BJP's Fight in West Bengal 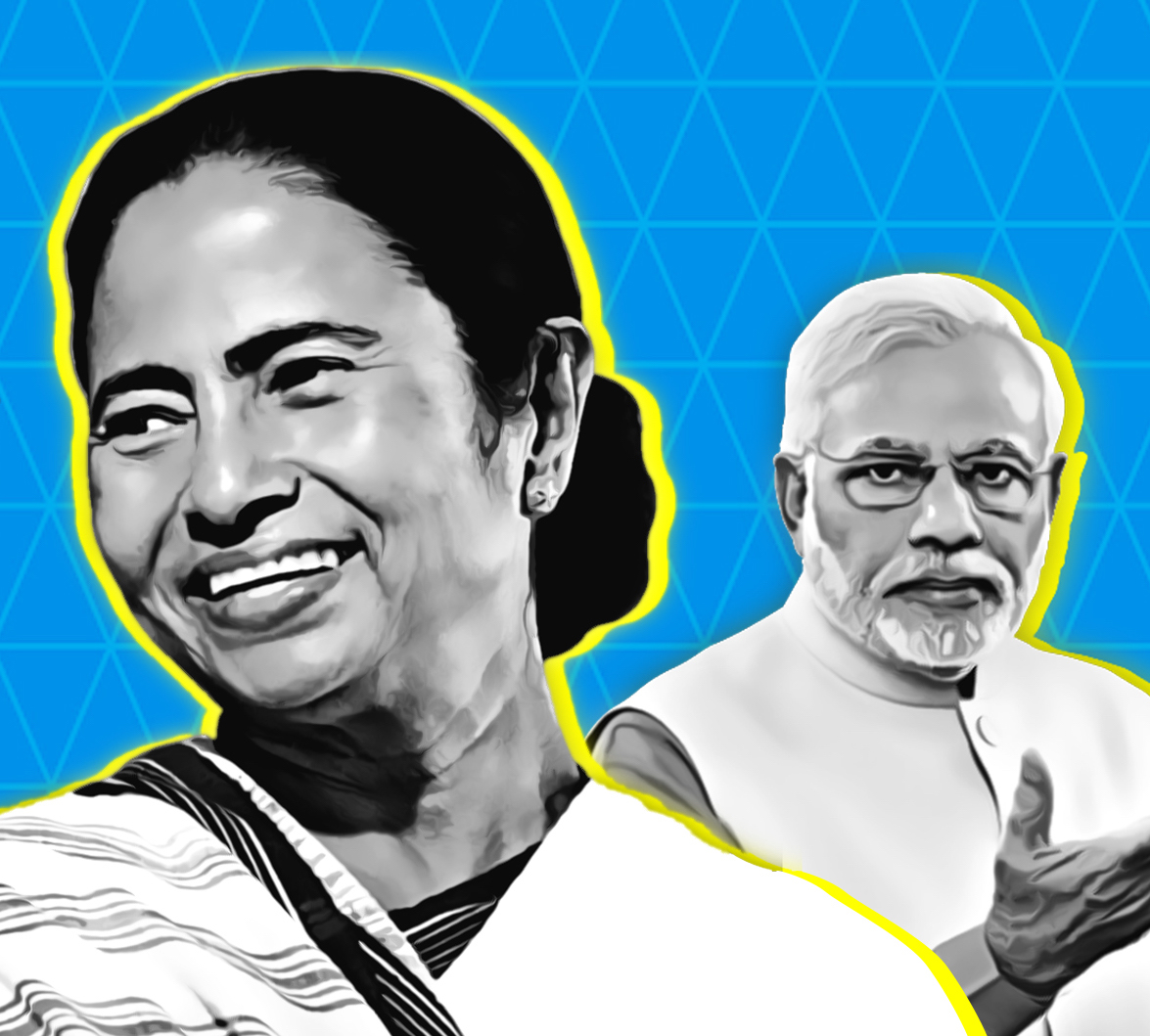 With supporting research by Ishaana Aiyanna

The West Bengal Legislative assembly elections are slated to take place in eight phases later this month. At Logically, we have been tracing the trends and narratives around campaigning in the state. The Bharatiya Janata Party (BJP), which has never won an assembly election in the state, has an aggressive strategy underway. From Uttar Pradesh's Chief Minister Yogi Adityanath, Home Minister Amit Shah, and to Prime Minister Narendra Modi — the party’s top brass has been actively campaigning in West Bengal.

An emergent "Insider vs Outsider" narrative in West Bengal perfectly illustrates how parties use digital media to drive narratives and influence public opinion.

The "Insider vs Outsider" narrative is not new and has been previously used by political parties to influence public perceptions. Several BJP leaders, including Modi, have looked upon Indian National Congress Sonia Gandhi's Italian and Christian ancestry with derision. This, despite Gandhi having long surrendered her Italian citizenship for Indian citizenship. This time it’s the BJP that has been labelled the "outsider" as its leaders are mostly not from Bengal and are accused of being ignorant of the Bengali culture.

Bengal’s ruling party — the Trinamool Congress (TMC) — positions the BJP as an outsider in multiple ways.

West Bengal is renowned for its rich culture and heritage. The Bengal Renaissance in the 19th century witnessed the rise of several cultural, social, and literary Bengali icons from Rabindranath Tagore to Ishwar Chandra Vidyasagar and Dwarakanath Ganguly. As a result of this, invoking Bengal's culture has always been a critical part of regional politics and voter appeasement. Exacerbating these tensions in the ongoing campaign, Bengal Chief Minister Mamata Banerjee has frequently referred to the BJP as "Bahiragata," meaning outsiders, with no connection to Bengali culture or roots, unlike the TMC itself.

On Pandit Ishwar Chandra Vidyasagar’s 200th birth anniversary in September last year, Banerjee made reference to the “outsider” narrative. Without naming the party, Banerjee implied Home Minister Amit Shah was somehow responsible for the desecration of Vidyasagar’s bust since it was at his 2019 rally that some miscreants damaged the bust in a city college. She said “outsiders” do not respect Bengali culture. The full context however was that the bust was destroyed because TMC and BJP workers clashed with each other. In November 2020, the TMC alleged that “outsiders are running riot in West Bengal.” Minister and TMC leader Bratya Basu said, “Some outsiders from the BJP are running riot in Bengal. They do not know about Rabindranath [Tagore], do not know about Birsa Munda.”

To counter this narrative, the BJP has been employing political strategies to show that they understand and respect Bengali culture. Some academics have argued that appropriating regional icons will help in the appeasement of regional votes and the BJP has done this in several elections. During his visit to the state, Shah visited the birthplace of Swami Vivekananda in Kolkata and Rabindranath Tagore’s workplace. The home minister also visited Aurobindo Bhavan, the birthplace of Sri Aurobindo. BJP state president Dilip Ghosh led a padyatra on Vivekananda’s birth anniversary in Kolkata and the Prime Minister visited Bengal on the 125th Birth Anniversary of Netaji Subhas Chandra Bose.

Another facet in the outsider narrative being pushed by the TMC is that the BJP is the party of “Delhi and Gujarat.” On December 10, while visiting a Duare sarkar (a campaign which aims to make schemes of the state government more accessible) camp at her assembly constituency Bhawanipore, Banerjee said, “Remember, BJP is not a party of Bengal but it is a party of Delhi and Gujarat. They should return to those states. Don’t trust the BJP or believe them. If you want to fight elections in Bengal, do it without bringing outsiders.” Union minister Nitin Gadkari criticized Banerjee for calling the BJP an “outsider party.” He said “We want to unite the country and not divide it. The development and advancement of India is BJP’s only aim. Mamata Banerjee calls the BJP an outsider party but the Jan Sangh, based on the ideals of which the saffron party was formed, was founded by Bengal’s son Syama Prasad Mookerjee.”

The insider vs outsider debate has been demonstrably intensified through social media campaigns. On March 7, Modi visited West Bengal to address a rally in Kolkata. On that day, more than one million tweets were posted on Twitter under the hashtag #ModirSatheBrigade (meaning Bengal is with Modi) pushing it to be the top trending hashtag on Twitter.

Amidst these tweets, Modi's account and the account of the prime minister’s office tweeted about this insider versus outsider narrative. What earlier started as the TMC’s key theme to appease voters’ emotions and culture, is now being used by the BJP to drive the message that they belong, especially by frequently referring to Syama Prasad Mukherjee. During a recent rally, Modi referenced the outsider vs insider narrative, saying “BJP is that party whose thoughts have Bengal’s smell, and BJP is that party whose sanskar or culture has Bengal’s taste. Bengal is in BJP’s DNA”. He later tweeted, “Since TMC loves commenting about “outsiders” I want to ask them: TMC is a breakaway faction of Congress. Who founded the Congress? Are Marx, Lenin, and Mao from Bengal? In reality, BJP’s foundations are closely linked to West Bengal thanks to Dr. Shyama Prasad Mookerjee”. This tweet was retweeted over 4,000 times and we found that the day Modi made this statement, the phrase “BJP outsiders” was used on Twitter almost 3.5k times.

This graph shows a sudden spike in volume of the “BJP outsider” narrative after Prime Minister Narendra Modi’s tweet on 7 March 2021. (Source Zignal via Ishaana Aiyanna)

This tweet by Modi was retweeted aggressively to promote the BJP’s take.

Most of the accounts displaying automated behavior have pro-BJP bios and on an average, these 50 accounts post around 61 tweets or retweets per day, indicating bot-like behavior.

Account created in 2010, no record of tweets from when the account was first created. Analysis of the last 2178 posts show that there are at least 91 tweets per day depicting bot-like behavior. (Source: TruthNest via Devika Khandelwal)

Account created in 2010, no record of tweets from when the account was first created. Analysis of the last 2196 posts show that there are at least 129 tweets per day showing bot-like behavior. (Source TruthNest via Devika Khandelwal)

Account created in 2010. Analysis of the last 2199 posts show that there are at least 440 tweets per day showing bot-like behavior. (Source TruthNest via Devika Khandelwal)

Political rhetoric tied to culture and values is commonly used by political parties in election mode. In on the ground discussions at campaign events, competing parties have better access to an equal footing. However, the very same campaign narratives coupled with digital media techniques online may skew the discourse as seen by the unprecedented volume pushed for by the BJP using bots and bot-like accounts.

Only five days before this rally, on March 2, an expert committee set up last year by the Election Commission recommended that “hashtags trends may be treated as political advertisements during the election process and subjected to media certification and monitoring committee regulations of the Election Commission”. The committee also noted that Twitter is a place for highly polarized narratives and some form of monitoring is required since India has almost 3.4 crore active users on Twitter.

With aggressive social media campaigns pushed by different political parties, the need for social media and content moderation is gradually becoming an important aspect of campaigns. Although rhetoric is harder to track, high bot and bot-like activity churn over the same content repeatedly helping the party push their narrative and agenda to the forefront.