The Protest No One Noticed 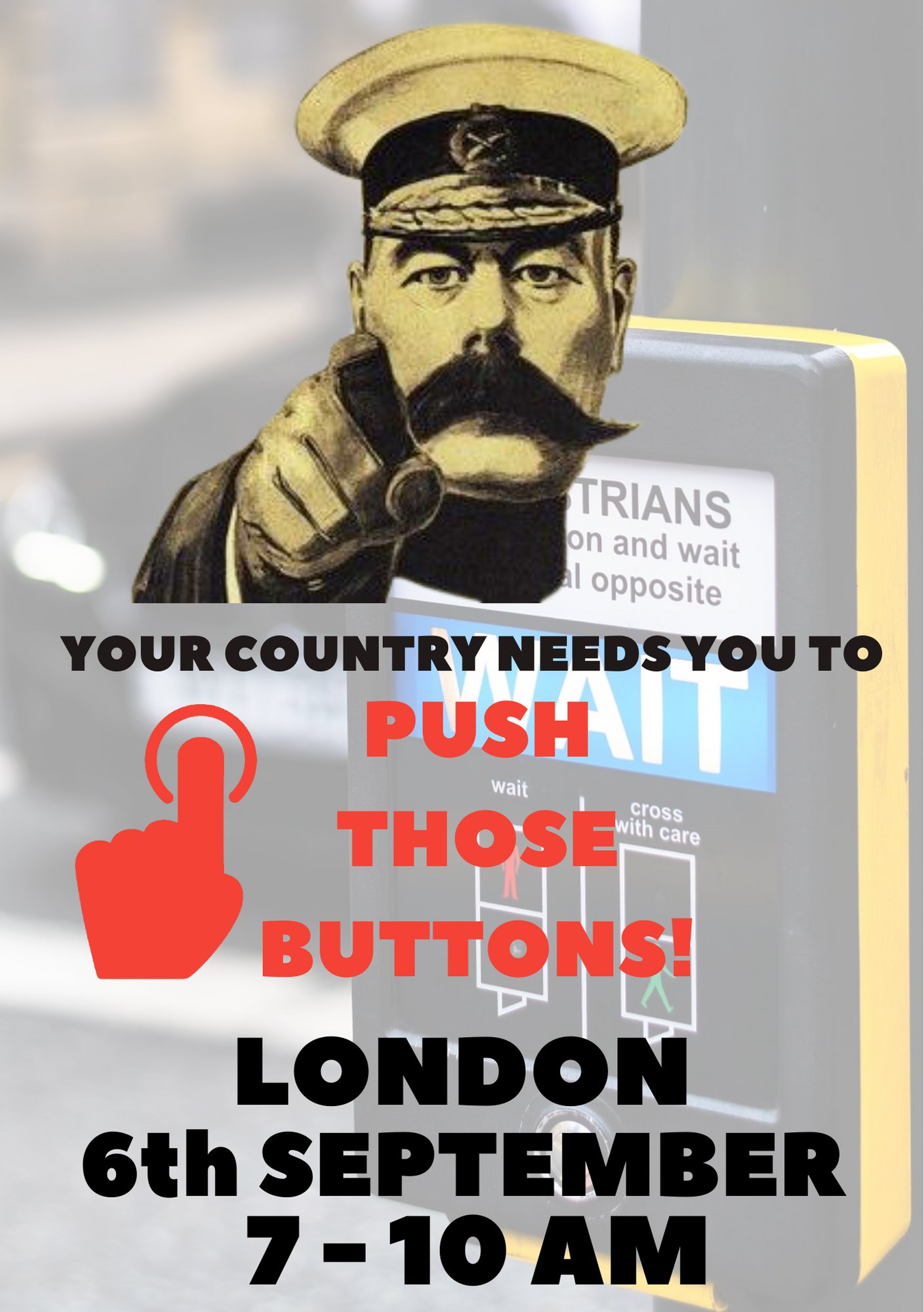 You might not have noticed or realized, but on Monday between the hours of 7-10 AM, a monumental protest was held in London. Members of the group Push Those Buttons (previously called “Push Them Buttons”), sick of “tyrrany, genocide, vaccine passports, injecting children & this corrupt, traiterous government,” descended on London to...simultaneously push the buttons of every pedestrian crossing in the city.

“We aim to bring London to a total standstill and remind this government that NOTHING moves or happens in this country unless the people agree to it,” the group’s public Facebook page announces.

“This may well be our last lawful & peaceful chance, time is running out. Let's score a massive home run guys and reenergise ourselves & our belief. If you do not consent to this governments evil, treasonous, corrupt ways please join us in mischeviously grinding the runaway train to a halt on Monday September 6th. United we must now stand & push those buttons. We will sieze the initiative from a government who ignores us as they rob us of our lives & rights… One Love & Hallelujah.”

Obviously, as of yet, the strategy doesn’t seem to have worked. Nevertheless, there is something kind of beautiful about what Push Those Buttons aims to achieve.

The people behind the group – which has 3.6k members and lists five admins, two of whom are called Roger and two Barry – are clearly angry. While not all their anger strikes me as coherent (vaccine passports and vaccinating children against COVID are two things that are often mentioned but have yet to be implemented; it is unclear why vaccine passports and injecting children ought to be equated with genocide), at least some of it seems perfectly understandable. After all, the U.K. government has often failed in the past 18 months, to justify its decisions democratically, in ways that people feel able to accept and understand.

The anger has an intense, monumental, apocalyptic quality to it (pushing all the buttons at pedestrian crossings simultaneously may be our last chance; the government is betraying us by providing vaccines). But what’s perhaps most interesting about this anger is how the people who feel it have ended up trying to relate it to the world.

I am reminded of the sixth season of South Park. In this season, Kenny was largely absent – having been killed off by the show’s creators. His replacement in the core friendship group was Butters – a sweet, naive blonde little boy who functions in the show as the opposite of the malicious, racist Cartman. But then, in the season’s sixth episode, Butters was fired from the group for being “lame.” Feeling angry and rejected, Butters responded by creating his title supervillain alter ego – the titular Professor Chaos – and set about getting his revenge on the world. First, he attempted to flood it by leaving the hose running in his back garden. Then, he attempted to destroy the atmosphere by wasting a bunch of aerosol cans.

To my mind, this is reminiscent of Push Those Buttons. The final struggle against government tyranny is upon us – and all they can think of, as a strategy, is something so simple and domestic that if it really were possible to collapse society that way… well, the complete destruction of all things really would be a standing possibility, at basically all times.

Just as Butters thinks it’s possible to flood the world with the water from a left-on garden hose, in the imaginations of the people behind Push Those Buttons, if everyone pressed the buttons at pedestrian crossings at precisely the same time… then that would be it, for our social fabric, possibly forever.

When pushing all the buttons fails – what will the Push the Buttons group do next? It is possible to imagine such a group devising a Grand Plan to bring society to its knees. On Monday, we push all the buttons at pedestrian crossings, to make commuting by car impossible. On Tuesday, we all board every bus simultaneously and insist on trying to pay without the correct change. On Wednesday, our group will mobilize at rush hour, and stand on the wrong side of the escalators at train stations. On Thursday, we’ll trigger a run on the banks by taking ages to check our bank balance at ATMs. On Friday, we’ll all turn on our kettles and hairdryers at the same time, crippling the nation’s power grid – while on Saturday, if we all keep the taps running while brushing our teeth, that should do the same for supplies of water. On Sunday, society will finally collapse completely, when we all use our stockpiled supplies of mineral water to flush a pack of baby wipes down the toilet.

If only it really were that simple. I can’t say I’m on the same page as Push Those Buttons in terms of their specific motivations. But functioning democracies do actually need ways that citizens can register or indeed exercise their dissent in genuinely meaningful ways. Push Those Buttons and their Professor Chaos-ism must strike us as a joke. But our society would be in a much better place if we were all given some actually effective buttons to simultaneously press.