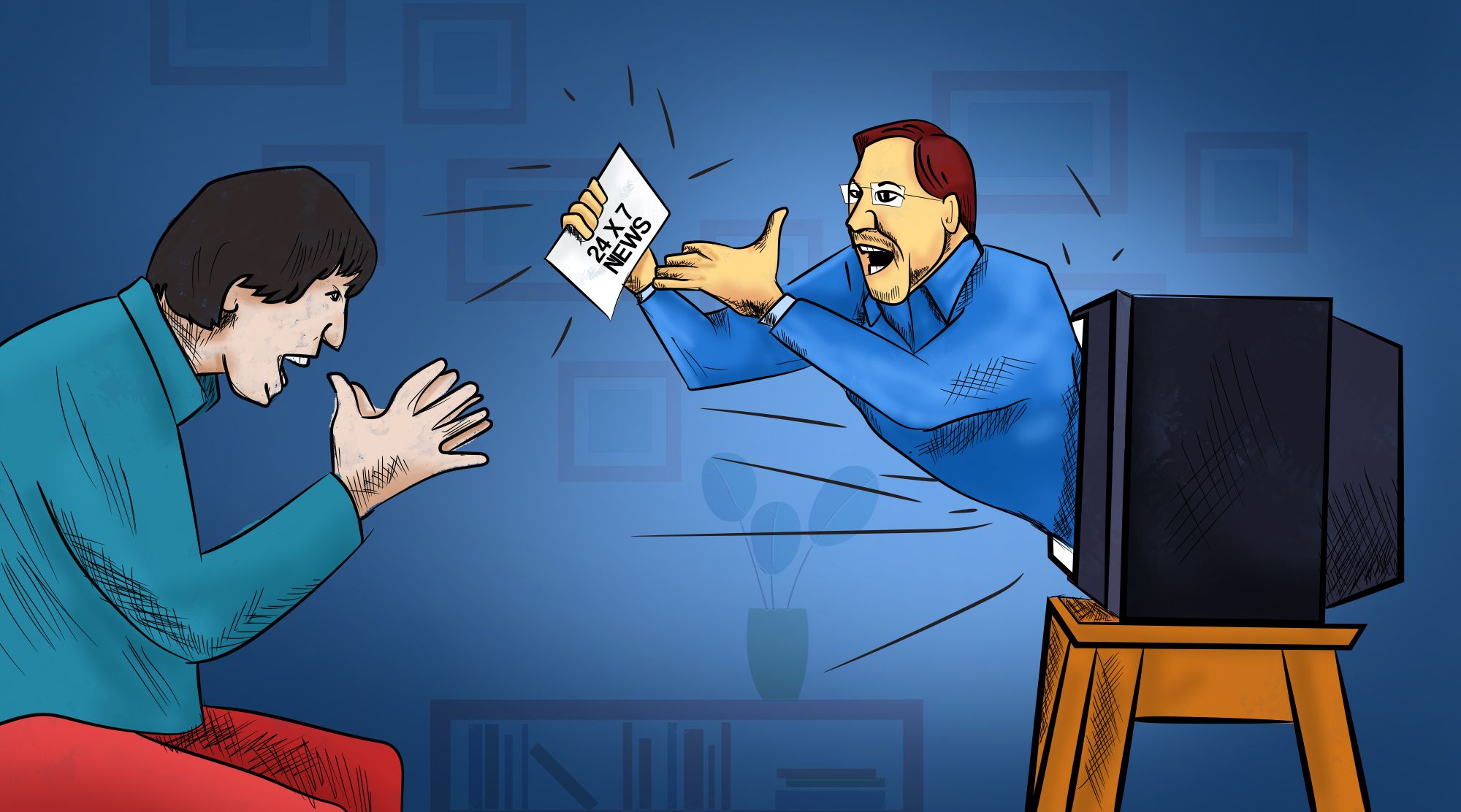 The rise of the 24-hour news cycle in the US is largely credited to the grim spectacle of the OJ Simpson murder case in 1994. Since then, cable news, then online news, and then social media platforms have all scrambled mercilessly for our attention. Much has been written on the various ways that the 24-hour news cycle has impacted the way the news is produced; the endless repetition of the same basic facts, treating any new information as ‘breaking news,’ paired with bright colors, flashing graphics and intense music. But it is far less common to talk about the way we consume our news has changed the way we engage with politics more broadly.

When CNN first broadcast in 1980 nobody could have foreseen the rise of the social media platforms which give us increasingly more of our news. Nonetheless, if what we are experiencing really is an infodemic (the situation of having more information to hand than we can responsibly or reliably make sense of), then Patient Zero was CNN.

For reasons of arcane, institutional culture, the old-media behemoths of the New York Times, the Washington Post, and a handful of other daily papers still have an outsized influence in shaping our ideas of what the big news stories are and why they are important. However, it is remarkable that the way these outlets report the news through their various platforms, in a constant drip-feed of new information punctuated by talking heads, owes much more to the style of cable news than it does to their own history of appointment reading. It is so easy to forget that for the longest time ‘the news’ just meant what was in that morning’s newspaper (with a few more adventurous outlets going so far as to publish evening editions just in case anything important happened throughout the day).

Radio and Television journalism has never had the same technological restrictions as newspapers; there was never anything to stop NPR or the BBC from running a 24-hour terrestrial news channel in the way it would have been impossible to print a 24-hour New York Times before the internet. But, because our cultural idea of what ‘the news’ looked like was drawn so heavily from the print newspaper industry, it seemed inconceivable that ‘the news’ on TV and Radio could or should look like anything other than, in CNN founder Ted Turner’s words, ‘a newspaper of the air’: a definitive, curated collection of the things which we needed to know that day, according to the best judgement of the journalists involved.

Crucially, such an authoritative collection can’t be assembled on the fly or drip-fed piecemeal as the day’s events occur. An editor can’t decide what the most important stories of the day are if the day is not yet over. So, over the last quarter century, we have started to see the form follow the function: the daily authoritative bulletin has slowly given way to the constant, incessant bullet-storm.

This would not be a problem if getting our news in this way just meant that we were more informed, or informed more quickly, or informed more reliably than before. All of these things may be true, but alongside the good habit of seeking out more information on politics and current affairs than we ever would have fifteen years ago, we have also developed the bad habit of expecting the news to fall into the format used for its delivery. The bullet-storm of news has become the background noise, and stories which only develop once per day or even less frequently just sound like eerie silence. I’m writing this in the middle of an unfolding global pandemic, which to date has claimed over 300,000 lives across the world. The scale of the crisis is inarguable, the severity unprecedented in my lifetime; so why do I feel like barely anything is happening?

Because the coronavirus pandemic, like so many of our other most pressing and consequential crises, is a slow burner. The horrors of COVID-19 will be remembered in the context of one final body count, much as we remember history’s other great evils and tragedies. But that’s not what it looks like in the eye of the storm. Here, in the middle of the crisis, the fatality rate ticks up, little by little, day by day, and slowly building graphs and numbers do not hold the public’s interest over consecutive days, much less the consecutive hours and minutes our new media ecosystem has primed us for.

The point here is not to judge the news media harshly for failing to lead every bulletin with a body count, but rather to simply point out that the format in which our news is now delivered does not permit slow-burn stories. The coronavirus pandemic is playing out in the media in a series of mini-crises, each of which is explainable in turn in a drip-feed of mini-developments: how many ventilators, how many masks, what is the new guidance on schools, on garden centres, on restaurants and cafes, who lied about what and to whom, and what drugs are promising, and when there might be a cure. There is no room in the way we now consume our news for the bulletin, for the audience, the public, the world as a whole to step back and talk about what the pandemic is writ-large, or what our long-term response should be.

The news bullet-storm makes us impatient. We now expect our news to be delivered in a series of self-contained, short questions and answers. A story which can’t be identified, queried and resolved in the course of a few hours is no longer news, it is a serial, and if today’s episode isn’t as exciting as yesterday’s, it’s very easy to get bored.

We have seen time and again over the last few years that those who manage to harness the rhetoric of impatience and boredom gain significant political advantages. Boris Johnson swept to power in the UK’s election of December 2019 with a campaign which famously involved very little campaigning, but one extremely effective slogan designed specifically to harness the sheer, overwhelming tedium that people felt over the Brexit issue: Get Brexit Done. Trump, similarly, in 2016 had no time for a nuanced, long-term story about his vision for the USA: Build the wall. Drain the swamp. Plans and slogans for an impatient electorate.

None of this is to say that impatience is necessarily a political vice. There are things that we have every right to be impatient about. Satisfactory responses to climate change are lacking across the world, as were satisfactory anticipations of the flu-like pandemic which has for years been literally the most well-predicted global disaster we might encounter. But, the very way in which we engage with politics as a whole, through consuming the news media, has primed us as an audience not to accept as news any story which we can’t reasonably expect to play out over the course of a day. It is not that the news makes us think that climate change, or antibiotic resistance, or the next inevitable pandemic or financial crisis is not important; rather, it does not provide us with the space to consider it as part of the news.

As the anti-lockdown protestors are demonstrating yet again, the politics of impatience is potent. Once people are bored of a story, they will act to make it go away - even if making it go away is palpably not within their power. The news media, and the formats in which it is distributed, has played a huge part in shaping our tastes regarding what is plausible and acceptable political action, and we ought to worry that it has made what we need to hear unpalatable.