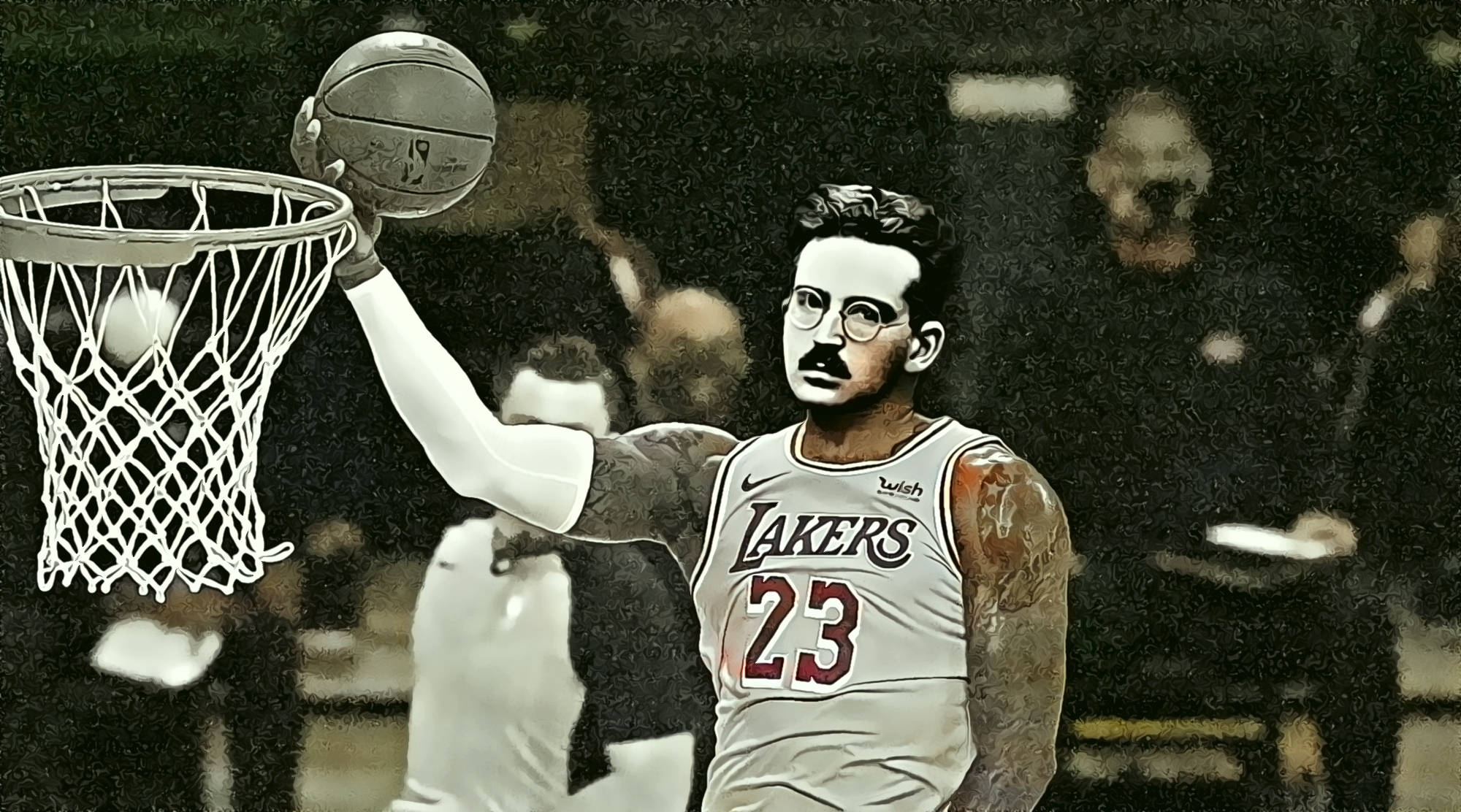 Recently, there has been a lot of excitement surrounding the development of Non-Fungible Tokens or NFTs. An NFT is like a bitcoin, except that it represents something unique. While the cryptographic information associated with a bitcoin only represents, you know, a bitcoin, an NFT is associated with something like a piece of digital art, or a video clip (technically, anything can be minted as an NFT, but these are some especially popular forms). NFTs can thus be used to create artificial scarcity in art markets, or facilitate the exchange of NBA clips as if they are trading cards. A LeBron James dunk recently sold for $208,000; a few days later, a work by a digital artist named Beeples was the first NFT listed for auction by Christie’s, and has since sold for $69 million (nice). The band Kings of Leon have even announced that their latest album will be sold as an NFT.

In his great essay “The Work of Art in the Age of Its Technological Reproducibility,” the philosopher and cultural critic Walter Benjamin tells the story of how modern technological advances, whose proliferation was then still in living memory, have shattered any old-held notions of authenticity in art. Photography allows any painting or sculpture, which might once have been seen hanging only in a particular collection or church, to be almost infinitely reproduced in a wide range of alternative forms – irrevocably modifying its effect in the process. Similarly, the gramophone allows any performance of a musical work, which might once have been lost to time as soon as it was played, to be repeated in the home at any time. What once was central to the work of art — “its unique existence in a particular place… that bears the mark of the history to which the work has been subject” — has been destroyed by our ability to reproduce art on a mass scale.

Benjamin has another word for this thing that has been destroyed – one that he introduces, as far as I can tell, to avoid any baggage associated with the concept of authenticity. He calls this destroyed thing the “aura.” In bygone ages, Benjamin argues, art had what he calls “ritual value” – it got its meaning through how it related to a particular religious tradition . In the Renaissance and early modern periods, of course, art began to be widely secularized – but here Benjamin identifies a “secularized ritual value” based on the “worship” of aesthetic concepts such as beauty. A work of art’s aura can come from its being situated in a ritual tradition: the possession of aura entails both the object’s uniqueness and a sort of distance from the viewer. Things with aura feel somehow inchoately larger than us: we cannot quite see them as a whole, they are not possible to fully comprehend. There is a sort of mystery to them – they are supposed to fill us with awe. (Imagine a Medieval peasant walking into a magnificent cathedral, full of sculptures which would back then have been painted many colours).

This aura, then, is powerful – but losing it is no bad thing. The erosion of aura allows artworks to be brought closer to the public as a whole; for ritual to be replaced by politics – and thus for art as such to be democratized. Far from being over-awed, the public can now relate to art in a critical way: when a modern audience watches a film, Benjamin thinks, they do not do so only as a group of passive spectators, seeking individual culinary enjoyment, but as a group of experts – assessing it together, even at the moment of viewing. I think in Benjamin’s day it was more normal to talk in cinemas – but nowadays, of course, he could just have watched clashes on Twitter between high-brow cinephiles, and enthusiasts of the MCU who think they are also high-brow cinephiles. In this way, people in general can become better able to orient themselves towards a world which is rapidly speeding up, often beyond our ability to properly comprehend it.

Naturally, Benjamin’s story isn’t all sunshine and happiness: the Artwork essay was written following the rise of the Nazis, and he was a German Jew living in Paris – Benjamin would later die trying to flee France following the Nazi invasion. Benjamin was very aware that modern technological developments had thrown humanity into a very real crisis, and that his progressive vision – the democratisation of art and life, through the politicisation of aesthetics – was threatened by an opposite reactionary one – the fascist aestheticization of politics, which attempted to restore ritual value to art by subordinating it to the personality of the leader and glory of the nation through war. In the Artwork essay, what he was really doing was showing how fascism might be resisted by embracing modernity: against the temptation to retreat to an older, ostensibly more harmonious age – an age where even if there were no Nazis, there were still plenty of other bad things to deal with regardless.

Putting Benjamin on the blockchain

So in a way, what NFTs might seem to be heralding is a highly un-Benjaminian technological development: one which allows us to restore aura, to revive lost notions of authenticity. Indeed: as a form of blockchain technology, NFTs literally do what Benjamin claimed unique, non-reproducible art objects used to: provide a log of the history of the exchanges to which the work has been subjected (in fact, they perform this function in an arguably much more transparent way). Aura is back, baby: Finally, we will be able to see art with Medieval eyes again.

But look closer, and one will see that this can’t possibly be what NFTs are doing at all. The tokens might be non-fungible: but the art (or similar) that any given NFT is associated with remains just as reproducible as it was before. Even the NBA shots people can buy as trading cards can still be watched on the Top Shot site. The art has no essential connection to the NFT that has been ‘minted’ with it – beyond the fact that some closed market, like a sports league or an auction house, maintains that this is what the NFT, as it were, means. When you own an NFT then, what you have purchased is not really a sports clip, or a piece of digital art , but simply a string of cryptographic information – information whose scarcity is guaranteed by the immense amount of real, planet-destroying energy that is required to produce it.

As NFTs are becoming more widespread, then, the aura of art has if anything just been further profaned: on the blockchain, art is stripped of all its old value: all that was once sacred melted down into crypto.

But perhaps NFTs could nevertheless be considered to involve something like what Benjamin calls ritual value – even if this is not something they are restoring to the art itself. In another, much earlier essay – a fragment, really, unpublished in his lifetime, from 1921, entitled “Capitalism as Religion,” Benjamin speculates that “a religion may be discerned in capitalism,” which is to say that “capitalism serves essentially to allay the same anxieties, torments, and disturbances to which the so-called religions offered answers.” Capitalism tells us who we are, what we should do, what we might hope for – it gives us our place within the world.

Who, through capitalism, has taken on a god-like status? Who else but a small collection of tech billionaires: the likes of Jeff Bezos, Elon Musk, Mark Zuckerberg, and the late Steve Jobs. Men (or at least mostly men) whose extreme wealth exempts them, almost entirely, from the ordinary needs of their fellow humans: beings who are free, now, to explore the stars, or the secrets of immortality; to stand at the head of their company as if it were a nation, and use it to replace many of the key functions of the state. Men who are the subject of books, movies, and guest appearances on TV shows that function like hagiographies; whose fans really do seem to worship them as if they were saints. The tech billionaire is someone who has transcended the otherwise overwhelming constraints of the capitalist religion and ascended to the status of the divine.

Perhaps then the best Benjaminian reading of NFTs is simply to say: they help to place art in the service of this new religion. The internet has always been potentially threatening to people in power: because at its outset at least, there was nothing to stop it from becoming a space not only defined by democratic norms but in which the sort of scarcity that markets need to function could be made to no longer exist. The advent of technologies such as blockchain has helped make the internet much less free – in blockchain’s case, by being used to create artificial scarcity via hard-to-solve computer puzzles. This, incidentally, is why crypto would still be a bad thing, even if its environmental impact could be mitigated – scarcity is not something any free society should be aiming to produce. NFTs might not make art as such more distant from us – but they do help make the world we live in even more alien; harder for us ordinary non-tech billionaires to act in, or to understand.