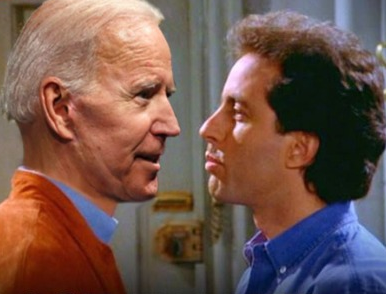 Last night, Biden carried Michigan by 16 points and won in every single county in the state. He also won by hefty margins in most of the other primary contests last night, but Michigan was the big one. Michigan was always going to be the bellweather state in determining whether the democratic nomination would remain a serious two way race. Sanders scored a major upset there in 2016 when he defied his polls to narrowly beat Clinton in the state. Now, Sanders has almost no chance of securing a majority of delegates, and an only slightly larger chance of denying Biden the same.

If you ever want a good laugh, read opinion pieces from the recent past making decisive predictions about the present.

CNBC published a piece by Jake Novak in which he claimed that no candidate has "failed as spectacularly as Biden has", declaring with absolute certainty that Biden's campaign was over and speculating as to which Mayor (Bloomberg or Buttigieg) his votes were more likely to end up with. Jonathan Chait wrote in New York Magazine that Biden's campaign was "almost certain to fail", at least leaving himself some room for doubt. What he left no room for doubt about was that Biden's "2020 campaign is going to end in a disaster for the whole party". While at the time he was talking about the moderate wing of the party being unable to unify around a candidate, there are plenty of reasons to think that Biden's candidacy is only the beginning, rather than the end of the democratic party's unfolding crisis.

Many of those reasons can be found in other articles written in the heat of Biden's decline explaining why his candidacy was doomed. Many of the points made there are still very relevant, and Biden's resounding primary victories do not, by themselves, do much to address them.

Among the identified reasons for Biden's 'inevitable' defeat are his frequent days off the campaign trail, his habit of making absurd gaffes and the lingering whiff of scandal around his family's business dealings which he has done little to assuage. However, among the least remarked upon, and for my money the most significant problem with Biden's campaign was neatly captured by Jack Shafer, writing in Politico. Let's call it Biden's Seinfeld problem: his candidacy is a campaign about nothing.

Now, maybe it's less true to say now that his campaign is about nothing than it was then. Then it was about having been associated with Barack Obama. Now it's about being associated with Barack Obama and also being a winner. But, these are crucially all passive plaudits. His campaign has been a masterclass in turtling; no signature policy has been put forward, no serious effort is being made to capitalise on Biden's personal appeal, and neither of these things seem likely to change at least before Biden has secured the nomination. Both would require a degree of electoral risk that Biden's campaign is clearly not comfortable with, not to mention having the candidate exposed to a great deal more public scrutiny than the campaign has been willing to give him so far.

Turtling is a fine strategy while you're waiting for multiple opponents to duke it out so that you can step in when the dust settles. Biden was lucky enough to see several of his rivals surge in the polls which made them, rather than him, the key target of attacks in ads and debates. He was also lucky enough to be the beneficiary of an unprecedented showing of institutional support by the DNC against Bernie Sanders. However, the very fact that this strategy was able to be effective is telling. So many of Biden's rivals saw bubbles in their support precisely because democratic moderates were looking for 'any moderate but Biden'. That so much of the democratic establishment clearly see Sanders as beyond the pale was a necessary condition of their endorsement of him; if it was about being pro-Biden rather than anti-Sanders, their support would have come much sooner.

Turtling is not, and never has been, an effective general campaign strategy. There is only one opponent, it is a zero sum game. A Seinfeld campaign may be enough to win over a disparate and divided democratic field; it may even be enough to beat Trump if the rest of the year goes badly for him. But, the more Biden allows himself to be a passive recipient of unenthusiastic endorsements of institutional necessity, the longer his campaign resolutely refuses to campaign on any substantive (or even unsusbstantive) issue, the longer turtling will be the only strategy open to him.