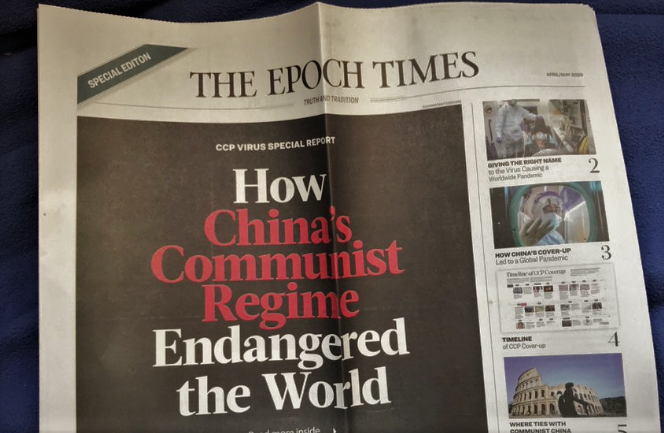 The Epoch Times may not be a household name in the UK right now, but many will be waking up across the country today to find a free newspaper bundled in with their post bearing their name. The paper’s front page headline reads “How China’s Communist Regime Endangered the World” – the answers to this question contained within their “CCP Virus Special Report.” Googling “CCP Virus” brings up a litany of conspiracy videos, message boards, and reports from The Epoch Times website. So who are they, and why are they pushing conspiracies via Royal Mail in the UK?

The Epoch Times is a right-wing and explicitly anti-CCP paper operating out of the US. It is linked to the Falun Gong religious movement in China and has aligned itself with the Trump campaign on multiple occasions, to the point of receiving bans from Facebook for running pro-Trump adverts and circumventing rules on political advertising. As such, it has amassed a significant Republican following in the US. They are also notable for pushing fringe conspiracies and stories related to QAnon, Pizzagate, and “deep state” actors while billing themselves as “fact based, unbiased, accurate news.”

Their presence in the UK is mostly limited to conspiracy videos on the origin of COVID-19 being bandied around social media. However, these latest reports of free newspapers correlates to an increase in UK and worldwide activity. Between late April and early May, councillors across Britain reported receiving emails from an Epoch Times mailing list linking to a digital edition of the paper, urging them to take action against an alleged CCP cover-up of the outbreak, and begin referring to COVID-19 as “The CCP Virus.” Around the same time, newspapers began arriving at addresses in Edinburgh, and since then in Sheffield, and Peterborough much like they have been in other parts of the UK today. Those same unsolicited papers have made their way to Canada, Australia, and across the US, and have even been printed in Dutch; all espousing a variation on the Coronavirus Bioweapon conspiracy that we have previously debunked.

The implications here are worrying, not least because it appears as though this is the latest run in a co-ordinated worldwide campaign by The Epoch Times to expand its readership. In addition, when Coronavirus has caused an ‘infodemic’, directly-distributed conspiracy theories will only shore up further uncertainty and potentially hamper relief efforts across the world. Finally, as racial tensions across the US and the UK become a house of matches, the distribution of a paper with links to European far-right groups espousing “great replacement” conspiracies may be a lethal uninvited spark.

Logically will continue to investigate developments in The Epoch Times’ campaign.

Earlier this week, a twitter account ostensibly belonging to a British writer named R.S. Archer, the author of the ‘David Saunders’ series of books, married to a French woman and living in the Dordogne, began posting about a British couple he...