The Depp-Heard Trial Is a Vector for Misogynistic Misinformation 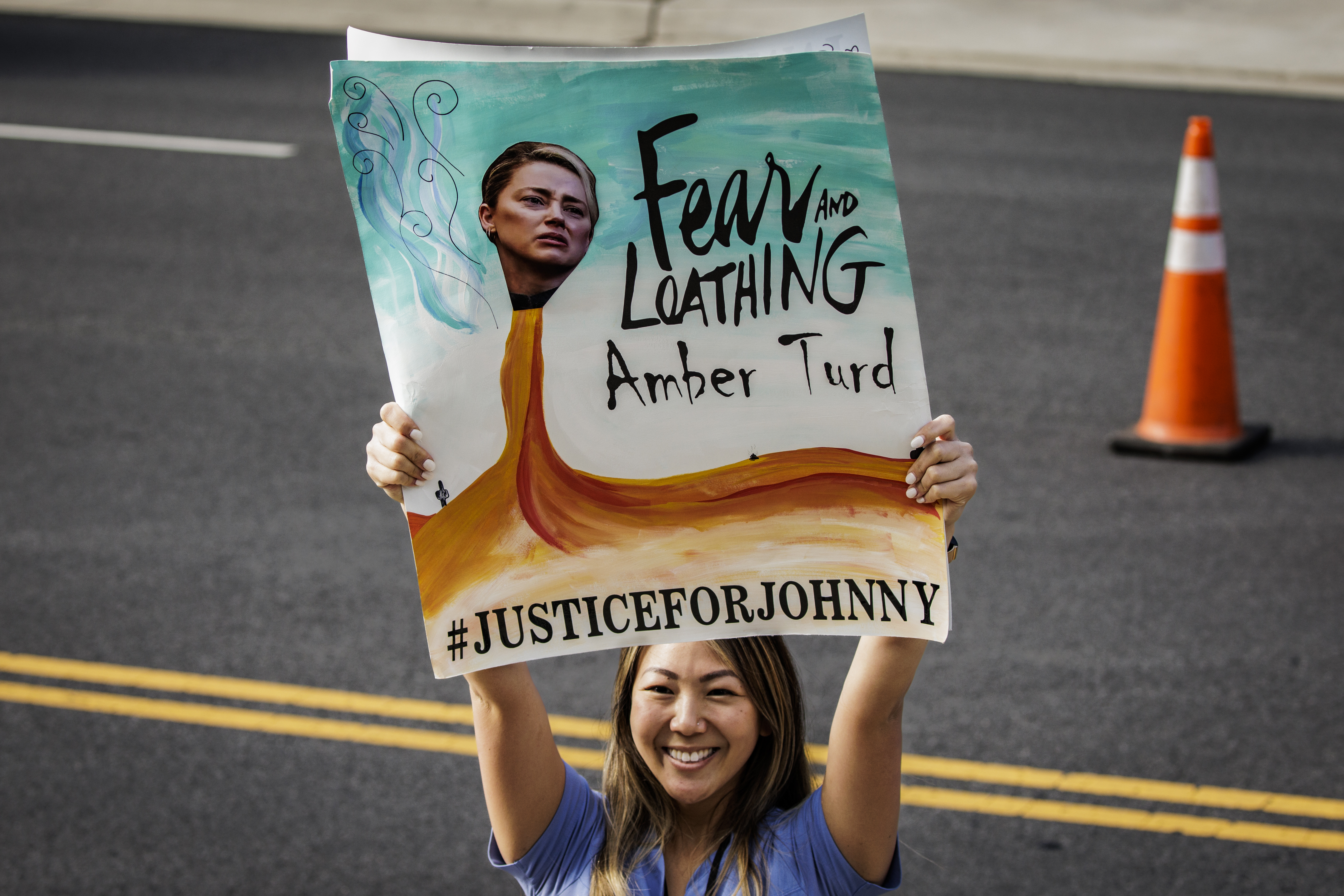 Johnny Depp and Amber Heard's libel trial has elicited an unprecedented online response. In the space of a few weeks, we have seen countless memes mocking Heard's testimony of domestic abuse, trending hashtags and terms such as "#AmberHeardIsAPsychopath" and "Scamber Turd," and users review-bombing anyone who testifies on Heard's behalf. In the case of this trial, the internet feels overwhelmingly and distinctly anti-Heard, rather than pro-Depp.

Depp is suing his ex-wife Heard for $50 million over a 2018 Washington Post opinion piece in which she wrote he was "a public figure representing domestic abuse." In the cyclone of online discourse, misogyny and misinformation are rife. Perhaps it is then natural that extremist and fringe groups have flocked to the scene to partake in the online hate for their own gain. But why has this trial become such a vector for misinformation?

"The social media response to this case is unlike anything we have seen before, but there are some similar cases that can help us understand why it is so different," says, Dr. Nicole Bedera, a sociologist studying how our social structures make sexual violence more likely to occur. Bedera cites the 2018 Brett Kavanaugh case as one such example. A Supreme Court nominee at the time, Kavanaugh faced allegations of sexual assault from Christine Blasey Ford who testified that he "groped me and tried to take off my clothes" and that "I believed he was going to rape me." Blasey Ford's allegations shocked people across the U.S., but her testimony lasted for just a day and the Depp-Heard trial has entered its sixth and final week.

The length of the Depp-Heard trial, which started April 20, has made it very unlikely that most of the people commentating will have watched much of the livestream, Dr. Bedera argues. "Instead, false information about what has happened in the courtroom has proliferated, largely through memes and TikTok clips that take benign moments out of context and insist they are proof of Amber Heard's dishonesty. This happened during the Kavanaugh hearing too, but not on this scale."

These portrayals of Heard are distinctly misogynistic and gendered. "She is often portrayed as crazy and hysterical - the kind of stereotypical gendered ways of discrediting someone and or their testimony," says Dr. Caroline Orr, a behavioral scientist studying misinformation at the University of Maryland. We saw this in a TikTok trend where users acted out Heard's testimony of domestic abuse in an exaggerated way to suggest it was absurd and laughable. In one video that has 10.5m views, a woman makes cartoonishly melodramatic faces as she re-reads Heard's claims of being hit by Depp. "These attacks on her character are just to say: Regardless of what comes out of her mouth, don't listen to it," says Dr. Orr.

If you feel as if the internet has come together to pile on Heard, you're not the only one. Dr. Orr says there is a mob element to the online response. "People are almost forming groups and alliances based on not just being supportive of Depp but undermining and mocking Amber Heard."

We see this style of disinformation where users cite insider knowledge to undermine a narrative.

So who are some of the biggest voices of this Heard backlash? Women often seem to be at the forefront of this online community. On Twitter, there are several posts with high engagement from users who appear to be women who have experienced domestic abuse and think Heard's testimony is nonsense and offensive to "real victims." We see this style of discrediting across disinformation circles, where users cite expertise or insider knowledge to undermine a narrative. The posts are emotionally charged and create an impression that Heard is repugnant as she is pretending to be a victim of domestic abuse. In reality, no one's personal experience of abuse can make them an expert on anyone else's experience of this kind of trauma.

"Women who become survivors hold all kinds of ideologies, including the victim-blaming ideologies that saturate our culture," says Dr. Bedera. "And while victims are experts in their own experiences, they aren't necessarily experts on all experiences of gender-based violence. They will often assess the credibility of other survivors' stories based on how similar they are to their own, which can create a lot of disparities in belief based on race, class, sexuality, and gender identity."

Meanwhile, TikTok has been a key platform for misogynistic misinformation during the trial. There are hundreds of "Justice for Johnny" TikTok accounts reposting the same kinds of videos of court proceedings edited or taken out of context, meaning the same anti-Heard content is regurgitated across the platform. Lots of the accounts appear to have been set up around the time the trial began, which suggests they could have been a targeted move to support Depp. Pro-Heard or anti-Depp accounts are far less common in comparison.

With so much material to undermine Heard's credibility, it is unsurprising that fringe online communities have joined in. Men's rights activists have jumped onto this case, and forums have been flooded with content on the trial. On r/MensRights on Reddit, dozens of users label Heard's testimony a "false accusation" — even though Depp lost a similar libel case in 2020 against the U.K. tabloid The Sun for calling him a "wife beater." The court found that Heard had documented evidence in 12 out of 14 abuse claims, and was "the victim of sustained and multiple assaults by Mr Depp," in the judge's words.

These fringe communities also share biased news stories with captions such as "HERE IT IS!! CONFIRMING ONCE AGAIN FEMINISTS WILL BLAME ANYONE BUT THEMSELVES FOR THEIR OWN POOR BEHAVIOUR: Psychologist Explains Why Amber Heard's Psychiatric Diagnoses Should Be Discounted." Posts also urge users to complain to advertisers supporting newspapers that report on the anti-Heard online sentiment and join petitions against her.

Dr. Bedora argues even if men's rights forums are separate from other spheres of the internet, this extremist thinking is seeping into the mainstream bubble. We can see the impact of this on the trending hashtags during this trial, for example. Some of these include "Scamber Turd," "Amber Heard is a Liar," "Amber Heard is a HOAXER," and "Amber Heard is a Psychopath."

"The harassment of Amber Heard is deeply sexist, as is the defense of Johnny Depp. Much of that rhetoric directly mirrors what is happening on MRA forums," she says.

This leads to the extremist behavior exhibited during this trial, such as the targeted harassment towards Heard and anyone who testifies on her behalf. Psychiatrist Dr. David Spiegel took the witness stand on Monday and said Depp has "behaviors that are consistent with someone that both has substance-use disorder as well as behaviors of someone who is a perpetrator of intimate-partner violence." A day later, he was review-bombed on Google with users making comments on how he appeared during the trial. One person, a self-confessed Depp fan, wrote that he was "iffy" and his vibe was "scary."

This and the mob mentality directed at Heard has led to many experts, including Dr. Orr and Dr. Bedora, drawing parallels between this cultural flashpoint and Gamergate — the year-long harassment campaign from 2014 to 2015 which saw thousands of people within the games community systematically harassing, heckling, threatening, and doxxing women. This watershed moment contributed to the rise of the online alt-right movement.

The normalization of misogyny towards Heard impacts the way many people perceive the trial online. "Like Gamergate, the early narrative (especially online) was controlled by misogynist groups," Dr. Bedora says. "By the time the mainstream media took an interest in both cases, it was difficult to disrupt the overwhelming (and sexist) narrative already put in place."

"[Also] like Gamergate, the Depp/Heard trial is being used by the alt-right and other conservative groups as an entry point to their ideologies," she added. This was highlighted when Citizens and VICE World News found that The Daily Wire, founded by political commentator and columnist Ben Shapiro, spent tens of thousands of dollars promoting misleading news about the Johnny Depp and Amber Heard trial on Facebook and Instagram, with a clear bias against Heard. (Although, as internet culture reporter Ryan Broderick noted, that ad spend only resulted in a few hundred shares.)

"I expect that, like Gamergate, the Depp trial will radicalize a lot of formerly liberal or progressive men into a more conservative or extremist ideology based in sexism," Dr. Bedora says.

The worst thing is it would be hard to find this out. Misogyny and misinformation have become so commonplace during this trial, it is hard to know who has been radicalized by this and who was disseminating it from the beginning. One thing is clear: Dr. Bedora and many others fear what this one event is doing to the internet. No one predicted just how venomous the discourse would become and what this could mean once the trial ends.

Not Anti-Vaccine, Anti COVID-Vaccine: Misinformation Trends in the UK

With the Pfizer COVID-19 vaccine rollout only days away, some experts in the U.K. are concerned that uptake will be low. A study by University College London found that only 49 percent of people...

Multimedia Misinformation Is Advancing. Can AI Keep Up?

In 2018, Buzzfeed released a video of Barack Obama (or at least it looked like Barack Obama) calling President Trump a “total and complete dipshit.” The video was what’s known as a deepfake: the product of an advanced form of algorithmic video...