The Aurat March in Pakistan: Countering Misinformation in a Patriarchal Society 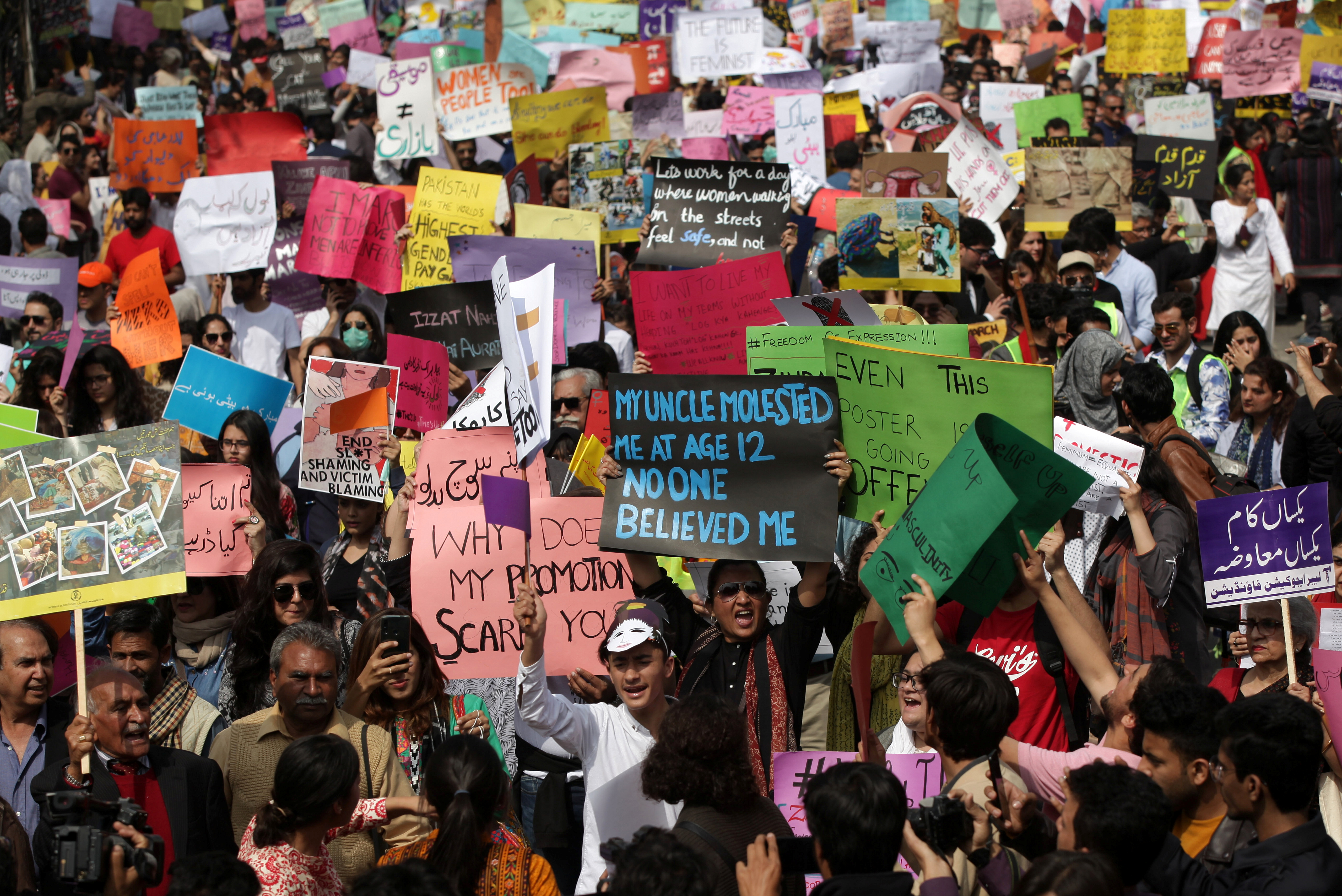 Every year, Pakistani women, including students, journalists, feminist activists, and a small number of men, gather in all the major cities of Pakistan for the Aurat March (Women's March). They march for freedom, sing songs about emancipation, and chant slogans supporting voiceless and marginalized communities. Women from varying socioeconomic backgrounds take to the streets, demanding an end to honor killings, workplace harassment, acid attacks,  and domestic violence, among other issues. The most common slogans of the march include “Mera Jisam Meri Marzi” (my body, my choice); “khana khud garam karo” (cook your own food); daughters are a blessing, not a burden; give women the right to inheritance; a woman’s place is in the resistance.

Women’s activism on the subcontinent is not new, but it has been years since women last railed against a culture that continues to suppress their voices in Pakistan. Pakistani women have been marching on the Aurat March for four years as Pakistan still lags behind the rest of the world in providing equal rights to women. On March 8 –  International Women's Day – Pakistan will witness the Aurat March for the fifth consecutive year. The organizers state that “this year we march for our labor. We begin by talking about the burden placed on us and our bodies. This year, we will march for acknowledgment, recognition and reward for this burden.” The theme of the 2022 Aurat March is “Re-imagining Justice," and the manifesto focuses on punishments to combat crime, along with issues such as forced conversions, minority rights, equal pay, and economic and environmental justice.

The Aurat March in Pakistan arrives annually amid a torrent of misinformation, which collects extremists, right-wingers, and ultra-nationalists together.

While on the one hand, social media encourages women to mobilize, participate in political discourse, and voice their opinions against the patriarchy, social media has become a double-edged sword for women’s activism. The misleading information and negative depictions of women activists demanding their rights aims to alter the narrative of the march, and in turn, impacts the mindset of the general public. When women resist, they are attacked both online and offline in Pakistan. When challenged as to whether they have read the manifesto of the march, the attackers claim that they need not read it and refuse to have anything to do with it.

As a result of the misinformation targeted toward the activists – which includes manipulated videos, images, and posters – the lives of several women have been put at risk. Women involved in the march have confronted backlash, social media abuse and online mobs, accusations of foreign funding, and security threats. The previous year saw a rise in hate, which was intensified by misinformation on social media, YouTube channels, and electronic media, resulting in threats and blasphemy charges from several prominent journalists and political workers. The anti-march hate campaigns became so alarming that many activists, organizers, and participants had to make multiple statements to counteract this misinformation online.

Bushra Mahnoor, activist and member of the Feminist Students Collective, says the Aurat March faces threats from bad-faith actors: “Some men attend to collect information, then produce clickbait. They fabricate material for their YouTube channels and twist the stories by circulating misinformation and propaganda. Some men easily integrate into the march and ask the participants strange questions. They record it in their cameras and later spread false stories on the internet.”

Mahnoor adds, “We try to cater to this problem, but the media plays a big role in spreading misinformation about the march. We see how a poster featuring the slogan “my body, my choice” was portrayed by the media, which sparked controversy from the very beginning. This means that even today, people think the meaning of this slogan is that women want to be naked.”

Fatima Shahid, a feminist activist and participant of the Aurat March, concurs with Mahnoor’s assessment. “Every year we see misogynist men masked as phony journalists and YouTubers who come on the march, only to prey on women by victim-blaming and threatening them.”

The organizers plan heavy security each year, but there are always loopholes. “We hope that such people who get no benefits from this, stop damaging the lives of people who are already suffering,” Shahid adds.

The women's march in Pakistan has been framed as “un-Islamic” Western propaganda. This is one of the main narratives that animate the misinformation surrounding the march; detractors often spread the notion that a western agenda is the only reason women in Pakistan would organize against patriarchy. The human rights campaigner Moiz Awan hit back against this, calling the Aurat March “a homegrown Pakistani gender revolution.”

Ajwah, a volunteer of the Aurat March who asked to be identified only by her first name, points out that the march has faced misinformation issues from the beginning, but this has now escalated: “It is so easy for people to believe all these things. Last year we made a blacklist of all the misinformation, including all the YouTube videos containing false information. We published a statement against this, but Facebook, Instagram, and Twitter were not forthcoming with any assistance when we reported misinformation.”

Ajwah adds, "Misinformation about the march is transferred through WhatsApp groups. Even when we post pamphlets in bigger cities, ordinary people don’t know about the march. Their priority is to watch it on YouTube and what they see is only misinformation and propaganda, which affects everyone.”

Another volunteer who would prefer to remain anonymous offers this summary of the march and the surrounding misinformation: "I would categorize the campaign against Aurat March for the past few years as both misinformation and disinformation – both born out of deeply entrenched attitudes about women in our society as well as an active campaign to malign and discredit the movement as a whole. These attacks have always been leveled against the feminist movement in Pakistan because we challenge the status quo, but we would urge consuming information not to rely on distorted lies about the march but to come and see for themselves what the march is all about."

Mahnoor and Shahid aren't very hopeful when it comes to authorities taking action regarding the misinformation spread on the internet about the march. Authorities and political parties often stay silent, or individual leaders sometimes voice support or condemn the march. Noor Ul Haq Qadri, the Minister for Religious Affairs, wrote a letter to the Prime Minister seeking a ban on the Aurat March on the basis of inappropriate slogans and being against the principles of Islam. Senator Sherry Rehman strongly condemned the letter, stating that “we condemn India for banning the hijab, but on the other hand we talk about banning women’s day. Women’s day is for everyone and it should be celebrated wholeheartedly.” But in either case the organizers have learned not to rely on much political support.

There are occasional success stories, however. Neo News, a digital channel, broadcast misinformation about the flag, claiming that it was either from another country and they were traitors, or that blasphemous slogans were written on it. When the organizers of the march reported it to PEMRA, Pakistan’s electronic media authority, they ruled against the channel, handing them a fine. This was a rare win, resulting in a warning being displayed against this misinformation.

And despite the pessimism voiced by activists such as Mahnoor and Shahid, women are determined to fight the misinformation surrounding the march. This begins with education; informing people about the march online and by holding spaces and constructive discussions on social media. Volunteers are also helping to educate the masses in cities across Pakistan. There are mobilization campaigns on the different campuses of universities in Islamabad. On the creative front, women are also spreading the message through art, with illustrations of women's labor. From a practical perspective, to try for an environment that is safe and free from harassment at the march this year, only authorized media personnel are allowed to cover it.

“How do we end femicide when this patriarchy is just so ingrained?” Shahid said of the disinformation the march faced. “I feel pity for these men, and for how easily they get scared by women who choose to come onto the roads for a few hours once a year to enjoy their sisterhood and stand together in empathy.”

Shahid emphasizes that the march is a place to celebrate women’s resistance to patriarchy. “The survivors and victims tell their stories through art and verses on placards, but the misogynistic predators cannot understand. When the march day arrives, those placards are used to threaten and ambush them. I too have been a victim of this cultural hate, which has caused great distress. But this would not stop me. I would not step back. I would quarrel. I have my women to stand by me.”

Nida Kirmani, a feminist sociologist working on gender and urban marginality in South Asia, called the rising tide of misinformation a “testament to the growing strength of the movement,” adding that “the anxiety surrounding Aurat March grows every year among the gatekeepers of patriarchy.” Gendered disinformation has several impacts on women, from silencing activists to preventing organizers from participating in political activities.

In October 2020, the Pakistan government decided to block TikTok for immoral and indecent content. Just a month prior, it announced it was blocking access to multiple dating apps, including Tinder and Grindr, also in a bid to restrict “immoral and...

Trans Athletes Are Being Politicized

Attacks on trans rights have intensified in 2022. Wherever there appear to be advances in human rights for transgender people, there are lawmakers and prominent transphobes eager to reverse this progress.