Turn Far-Right At Next Junction: The Anti-Lockdown Extremism Pipeline 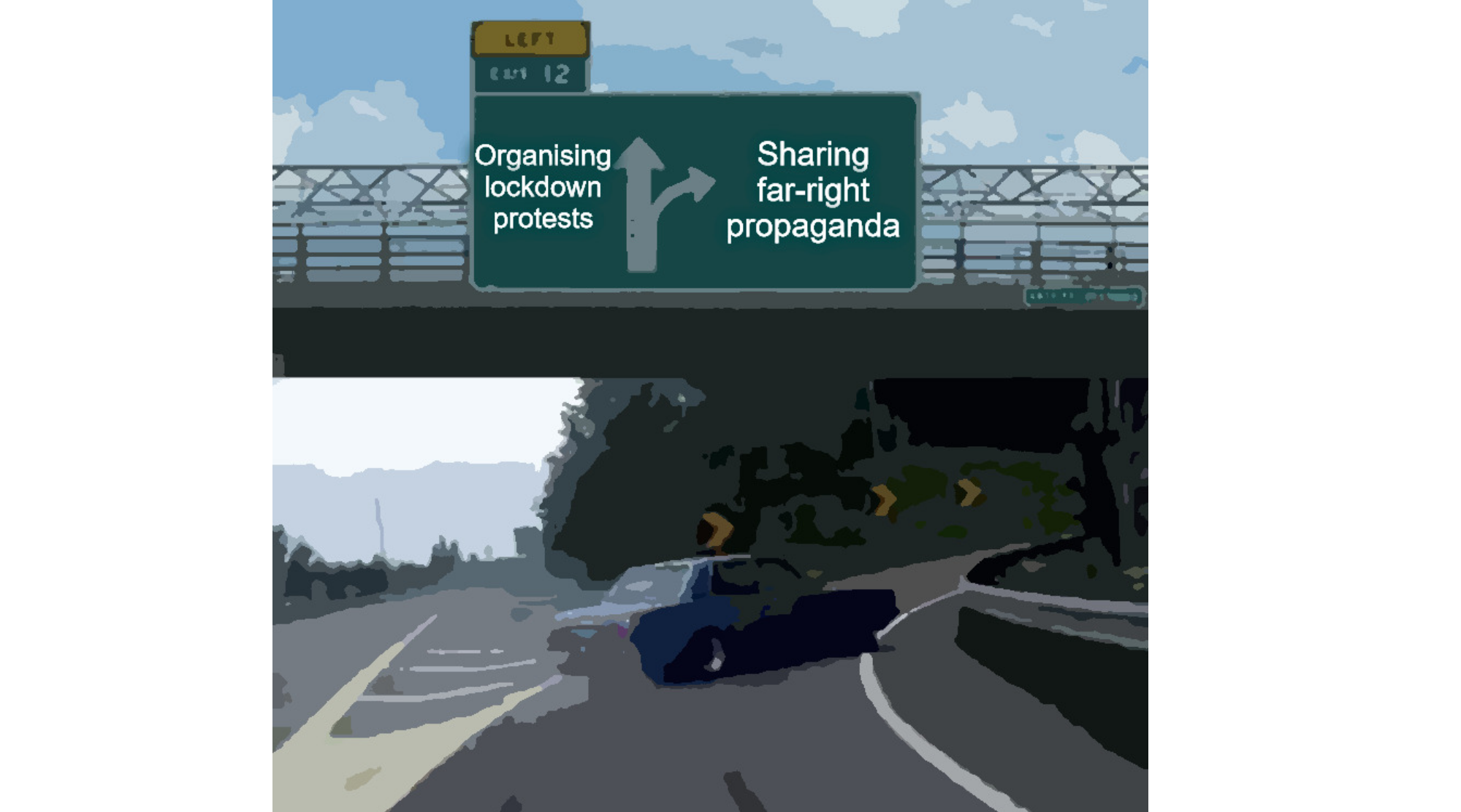 On November 19, the Metro (a free U.K. newspaper with an incredibly popular online presence) reported on an anti-lockdown campaign to “stop the M6”. The campaign had lofty ambitions. A poster announced that they had plans for “13 cities” and “many DJs”.

The Metro’s coverage included the full poster, together with the name of the Facebook group organizing the protest, whose ranks swelled from “almost 2,000” at the time of the article to over 4,500 by the time the group was removed two days before the December 3 protest.

There is an urgent lesson here about how to cover emergent protests here; the Metro undoubtedly boosted the groups numbers and helped advertise the cause. However, this article is about what happened to the discourse when the December 3 protest date came and went. 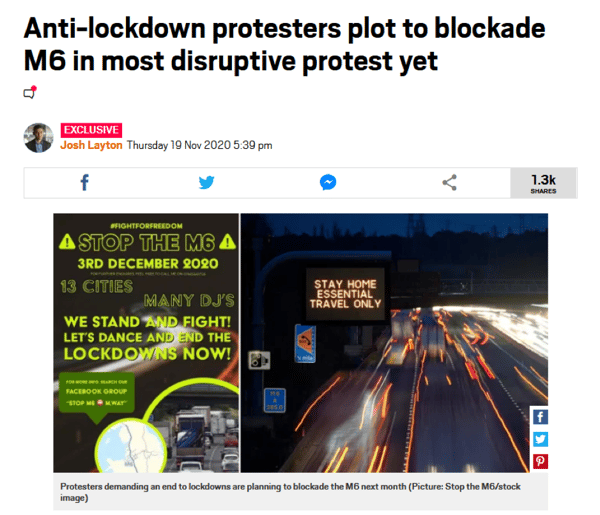 In the time between the Metro article and the group’s eventual removal from Facebook, organizers were encouraging members to join their accompanying Telegram channel. This, apparently, was where the real organizing would be happening.

Here, the ambitions of the poster were tempered against the reality of organizing mass civil disobedience. Only 262 people made the jump from Facebook to Telegram, and the organizers announced that 13 cities had been reduced to a single gathering at the Junction 20 services near Warrington.

The night before the protest, the Telegram channel was in full planning mode. Members were double-checking arrangements for sound systems and times for arrival, and a genuine sense of being part of something big was palpable. Some members even speculated on whether they could successfully block the transport of the COVID-19 vaccine across the country. 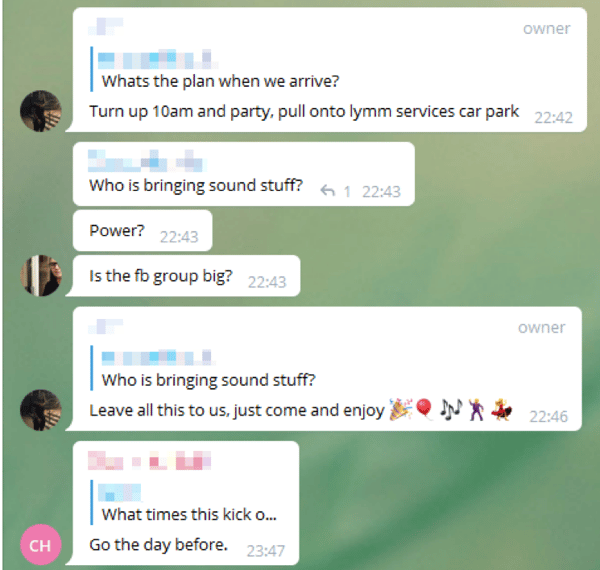 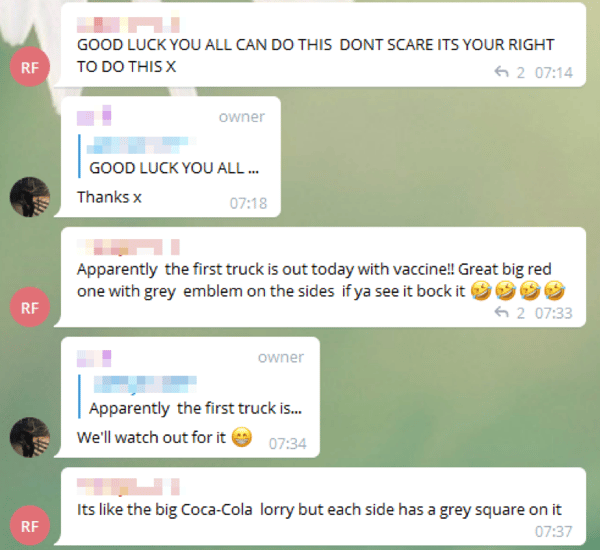 This mood continued on the big day, but started to sour considerably by lunchtime as it turned out that a police presence waiting at the services and a scant turnout on the day dashed any hopes of a triumphant motorway-crippling show of civilian force. It was around this time that two members of the group started getting a bit chattier.

Two members calling themselves The Shadow Man and The General had been members of the group for a while, but had not contributed to the planning and discussion. However, clearly sensing despondency in the group, they both offered their own strange forms of support.

The Shadow Man first waded in offering encouragement that the small turnout could still mount an effective protest, alleging that he had “shut Dover down for 3 hours with about 15 cars” but that in groups such as this, there are always feds watching (for the record, not a fed, but I was watching). 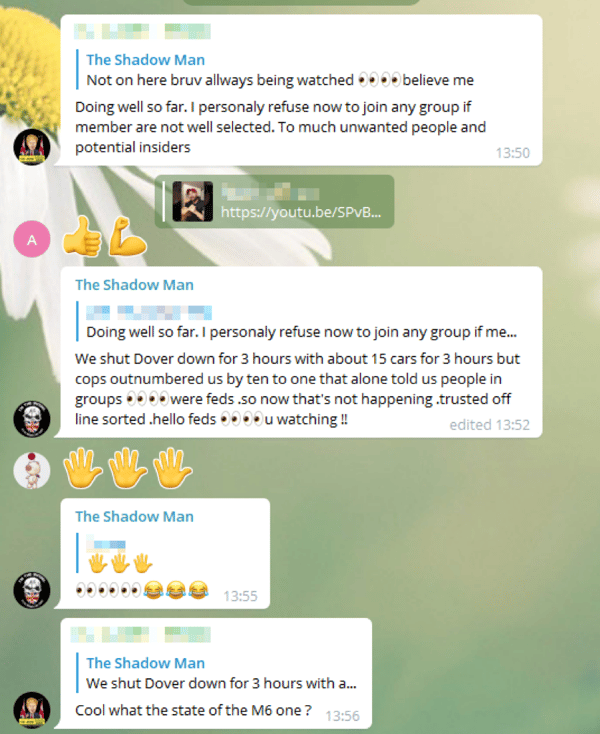 The Shadow Man in the group chat

The General, on the other hand, joined later on in the evening and began promoting his “Freedom Warriors” page. This promised to be dedicated to “taking back our freedom, sharing info and gathering intel” and being the people’s army against the new world order. 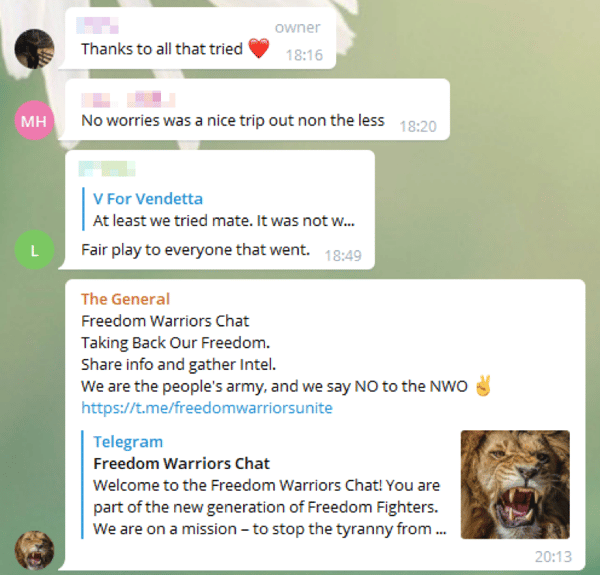 The General in the group chat

It wasn’t long before any discussion about reconvening or organizing another protest was lost among messages and cross-posts from groups frequented by The Shadow Man. The content of the page rapidly became unfocussed as posts from other previously unknown users flooded in. What was once a group dedicated to an anti-lockdown protest, posting occasional anti-COVID-19-vaccine and anti-government content, was awash with videos about “The Great Awakening” (the ultimate end point of QAnon, according to their lore), anti-immigration propaganda, Islamophobic content, and Proud Boys memes.

Although it isn’t clear whether the original group owner left or simply remained quiet after the failed protest, it is important to note that the flurry of “off topic” far-right activity from The General, The Shadow Man, and others was met with no resistance from existing group members.

After a post from Shadow Man cheering football fans for booing as footballers “‘took the knee’ for the BLM Marxist organization”, a follow up post cemented the intent of the new louder voices. A link to a YouTube video for “March of the Templars” along with the hashtag “DeusVult” – a popular rallying cry for white nationalists across Europe. 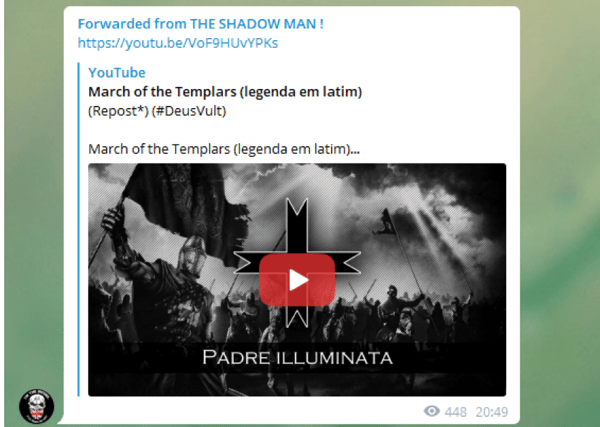 The chat with a link to the YouTube video

In addition, investigating the group promoted by The General put the recruitment drive by far-right groups in stark relief. Two posters joked about “endless debates about the Jews”, quickly followed by memes about white genocide, anti-immigration, QAnon and, crucially, every flavour of COVID-19 denial. 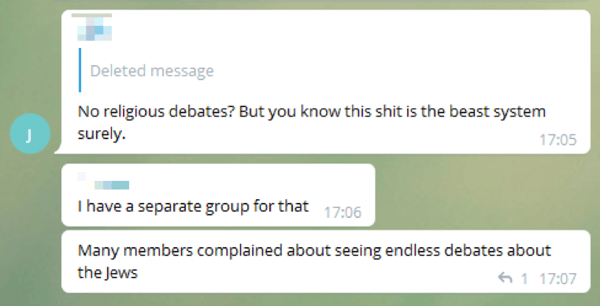 The members speak about "the Jews"

It is clear that far-right groups are using the discontent surrounding the U.K. government’s COVID-19 response as a recruitment opportunity, leading people towards more and more extremist content. The politicization of COVID-19 means that the rage felt by some against the government for lockdowns, masks, and other measures can exist in the same sphere as the rage they feel towards "Marxists", Black Lives Matter, Muslims or immigrants. In short, anyone they feel the U.K. government is being too "soft" on.

In addition, Telegram's system of forwarding messages and posts across different chats and channels means that it is incredibly easy for someone to follow a thread from the shallow waters of civil discontent around lockdowns to far more alarming discussions. While investigating, I charted a course of three forwarded posts from the M6 protest group before I was confronted with Adolf Hitler memes.

Today, any plans for another M6 protest are long-gone. The latest post in the group, shared by The Shadow Man from someone called Patriotic Crusader, complains about the U.K’s response to illegal channel crossings. It was met with an eager audience.