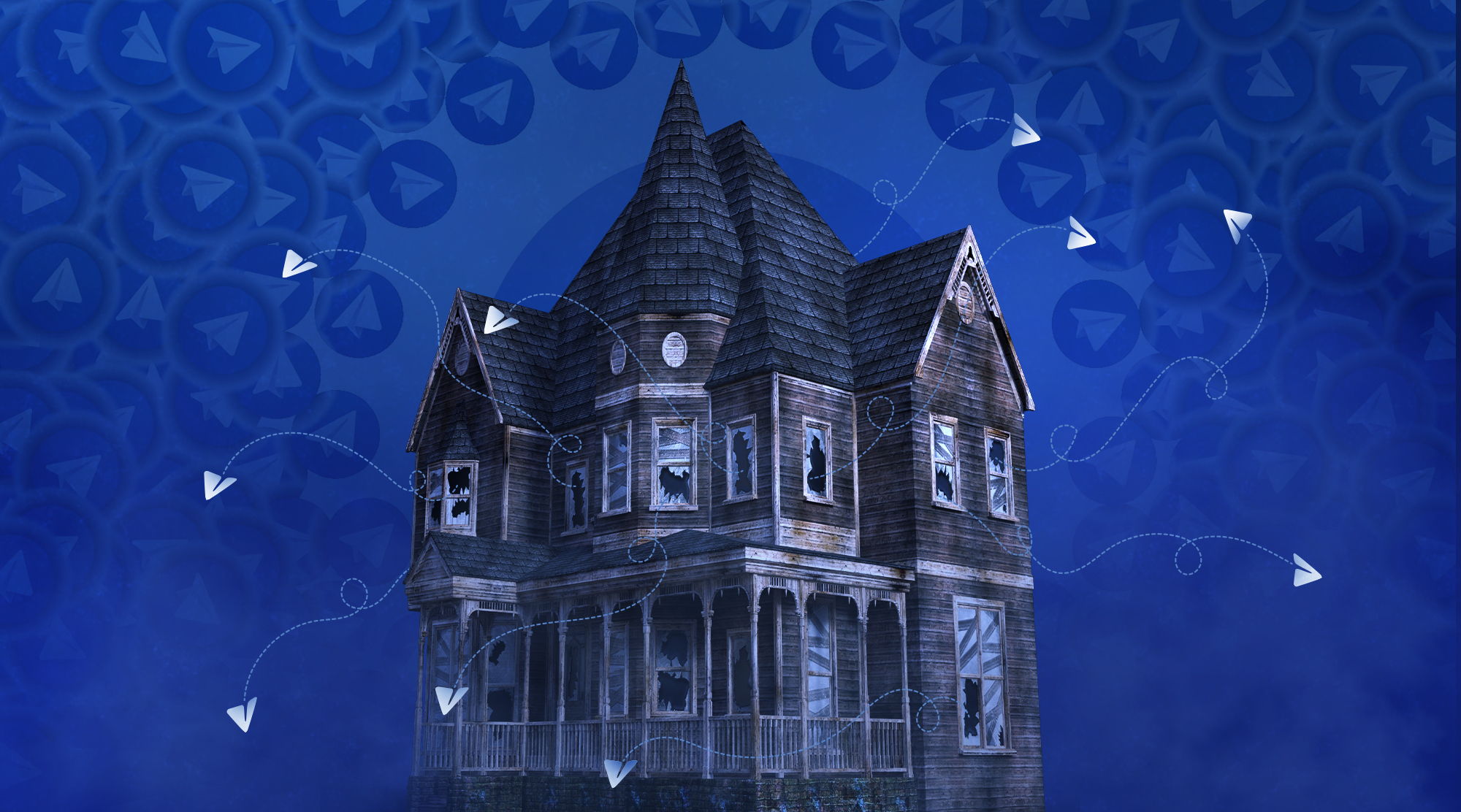 In this room, a speaker shares tips on where to find a doctor to prescribe ivermectin. Down the hall, a group is discussing the “tyranny” of local public health measures and cheering on the truckers in Ottawa. They tell you which door leads to the discussion of “racial issues.” There, the discussion largely revolves around racist memes.

Next door, people make plans to mass report the accounts of leftists, and a small group close to them make plans to get together at an anti-lockdown protest and share white nationalist material. In the hallway, you pass a few of your family members and have a quick conversation. Past the room for where your neighbors talk, there’s a speaker screaming about the Jews controlling the media and vaccines, explaining that it’s a plan for global population control, and encouraging the people listening to watch a ten-hour-long neo-Nazi propaganda film. The person sitting beside you recommends you come visit another room, where they’re talking about Aryan ideology. People walk throughout this connection of rooms, hearing from different speakers, joining different discussions, and breaking out in one-on-one discussions.

This place may sound bizarre, but it’s an apt metaphor for Telegram, the enormously popular messenger app that is now the home of an important propaganda wing of the extreme right.

Telegram describes itself as “a messaging app with a focus on speed and security… it’s super-fast, simple and free.” The app, which is currently available on Apple, Android, Windows, Mac, and Linux, was created by two Russian brothers – Pavel and Nikolai Durov – who also founded the Russian social media site VK. Currently headquartered in Dubai, Telegram exists as an American LLC and employs workers around the world.

From its inception in 2013, Telegram appealed to the security conscious, primarily because the messenger app offers, to a limited degree, end-to-end encrypted chats for its users. From pro-democracy organizers in South Korea, to protestors opposing Chinese intervention in Hong Kong, Black Lives Matter demonstrators in the U.S., and citizens from Iran and Russia who simply want to avoid government surveillance, people everywhere use Telegram to organize and communicate without someone looking over their shoulder.

Somewhere between its inception in 2013 and today, Telegram started to attract members of far-right groups and neo-Nazis.

As Miro Dittrich – co-founder of the Germany-based Center for Monitoring and Analysis – explains, the German far-right began flocking to Telegram in 2018 when Martin Sellner, the leader of Austria’s Identitarian Movement, moved to the app. In the same year, Sellner’s group Generation Identity had been banned from Facebook and Instagram, and Sellner himself banned from entering the U.K. for spreading hate.

Telegram's user-friendly interface paired with the infrequent moderation across the app makes it easy for individuals to interact and say just about anything without fear of being banned.

Importantly, Telegram takes a nearly completely hands-off approach to moderation. According to Matt Taylor, an independent researcher who focuses on monitoring accelerationist neo-Nazis, “Telegram's user-friendly interface paired with the infrequent moderation across the app makes it easy for individuals to interact and say just about anything without fear of being banned.”

While some American far-right groups started using Telegram in the mid-2010s, full migration to the platform really kicked off in 2019–2020. Figures such as Laura Loomer, Milo Yiannopoulos, and Proud Boys founder Gavin McInnes turned to Telegram when they – like Sellner – also faced bans from the mainstream social media sites.

Ahead of the 2020 Virginia Citizens Defense League Lobby Day – the day on which a band of right-wing actors protested what they believed to be restrictive gun laws – neo-Nazis used Telegram to plan and prepare for violence. Luckily, none came, largely due to the FBI’s thwarting of a plot from the neo-Nazi accelerationist group The Base to incite bloody civil conflict at the rally.

But then came the pandemic.

The Social Network for COVID Skeptics

Throughout the COVID-19 pandemic, mainstream platforms such as Twitter, Facebook, YouTube, and Instagram have been scrambling to address the problem of misinformation. Although their efforts have not always been successful and are often “too little too late,” many far-right and anti-vaccine influencers have indeed been banned from the sites. In response to this, many then followed the lead of other far-right figures and turned to Telegram.

Unlike WhatsApp or iMessage, Telegram offers features that straddle the line between social media and messenger. Users can create “channels," which function as one-way message channels that allow someone to send a feed of messages available to all their subscribers. Groups can host up to 200,000 members, the size of a small city. Public channels and group chats are searchable by name, allowing anyone to subscribe to a public channel or join a public group. Telegram also allows for a robust number of bots.

This is where Telegram’s “privacy” breaks down – while chats between two users are encrypted, channels and groups are not. It’s easy to search for public groups, and then follow the available links to other groups and channels posted in the chat. Several extremists have been foiled when the group chats they thought to be private were public, allowing their planning chats to be found in public searches on the app. And as Dittrich explained to me and as Logically’s Jordan Wildon tweeted, users can easily be geolocated if they allow the app GPS permissions.

But few users understand this lack of privacy, and still think it a private place. As a result, anti-lockdown and extremist content has flourished on Telegram. COVID-19 conspiracy groups have overflown with antisemitism. A German anti-lockdown group even used Telegram to organize anti-lockdown rallies around the world. After the storming of the Capitol on January 6, 2021, and another wave of bans, Telegram became the essential platform for QAnon influencers, many of whom in turn grew more radicalized and overtly antisemitic. This last example includes people such as GhostEzra –  real name Robert Smart – who shared the neo-Nazi propaganda film Europa: The Last Battle to his 300,000 followers.

On Telegram, fringe beliefs merged and recombined in strange new forms. Users who entered with interest in things like anti-lockdown protests and where to get ivermectin found themselves surrounded by neo-Nazis. The lines between different communities blurred. Telegram became a platform for the cultic milieu.

What is the cultic milieu?

The framework of the cultic milieu seeks to explain how movements form and influence one another as people move between ideologies. Simply put, the cultic milieu is the background primordial sludge in which conspiracy and extremist movements live and out of which new ones emerge.

As Logically’s Joe Ondrak explained at the start of the pandemic, the term was first proposed by sociologist Colin Campbell in 1972. Essentially, the cultic milieu is where one goes to find knowledge “rejected” by mainstream culture. Fringe religious beliefs, racism, alien abduction experiences, bigfoot hunters, alternative medicine practitioners, and more all rub shoulders in the cultic milieu.

For Campbell, one of the essential elements of the cultic milieu is what he called a “continuing pressure to syncretization,” a drive that causes groups to merge and borrow elements from one another. Similarly, Campbell described the process by which individuals may enter the cultic milieu due to a specific interest in one topic and find themselves exposed to completely unrelated ideologies. In his time, the cultic milieu existed in specialized magazines, lectures, group meetings, and other physical items and meeting places. With the internet, however, entering the cultic milieu is as simple as turning on a smartphone.

According to Dittrich, “A lot of different ideologies that have problems existing elsewhere on the internet have found their home on Telegram. They all formed their own clusters, but they are very heavily interlinked. So it's usually pretty easy to get from soft conspiracy stuff into neo-Nazi terrorism content. It's often just two or three clicks away.”

But this networking didn’t come along by accident. As Taylor explains, “White nationalists who were already on Telegram when the influx of QAnon adherents arrived saw the growth of these conspiratorial channels as an opportunity to further radicalize channel members by introducing white supremacist content into this digital milieu, and encouraging users to interact with that content.”

This means that users may not start out consuming explicitly hateful content but will be exposed to it and often grow accustomed to it.

For instance, when GhostEzra first started sharing antisemitic content on his Telegram channel, white nationalists and neo-Nazis flocked to it, commenting under GhostEzra’s posts with links directing users to their explicitly neo-Nazi channels. Simiarly, in the group for Disclose.tv, a sketchy news aggregator site that began as a paranormal and conspiracy theory forum, users shared links to other channels filled with neo-Nazi propaganda.

The question of moderation

Although Telegram shuns moderation, the platform has responded to outside pressure. Some extremist channels and groups are blocked in iOS or Android versions of the app due to pressure from Apple and Google on Telegram to follow the terms of service for the App Store and Play Store. Telegram has also pulled some channels and groups off the platform due to similar pressure. But the content is still freely available on the web version or desktop version of Telegram.

These purges are often ineffective. As Taylor explains, Telegram “often only targets a small handful of groups or channels which are often revived by users almost immediately.” This can lead to a game of moderation whack-a-mole.

Traditional models of moderation may not work. In Germany, which is home to a large extremist German-speaking Telegram community, moderation often relies on tech companies working with the government. Germany holds strict laws forbidding online hate speech, and the authorities in Germany are learning “that Telegram isn't interested in working to stop the spread of illegal content on their platform of extremist content there," says Dittrich. If Telegram continues to refuse, the German government could impose fines of up to 55 million Euros. Pressure from the EU and the U.S. may force Telegram’s hand, but in the long-run hateful and inciting content will likely remain on the platform.

The Saga of Ayurvedic COVID-19 Cures

As India’s COVID-19 caseload went up, there was a colossal increase in messages forwarded on social media about Ayurvedic cures for the disease

Last week, you might have seen a viral Sky News story about how the U.K. is among the “five nations most likely to survive a collapse of global civilization” – at least according to researchers from the Global Sustainability Institute at Anglia...