On 29 May 2022, Punjabi singer Shubhdeep Singh Sidhu, better known by his stage name Sidhu Moose Wala, was shot dead by unknown assailants in the Mansa district of Punjab, India. While Sidhu Moose Wala lived in India at the time of his death, he had ties to Canada, where he moved in 2016 and started his musical career. He first attained popularity in 2017 with his song “So High.” In 2018, his debut album reached the 66th spot on the Canadian charts and, two years later, he was featured in The Guardian’s 50 new artists for 2020.

The 28-year-old was no stranger to controversy. The Punjab Police booked Sidhu Moose Wala multiple times, once under the Arms Act, for brandishing weapons and glorifying gun culture in his music. One of his songs, “Panjab (My Motherland),” was criticized heavily for praising Khalistani separatist leader Jarnail Singh Bhindranwale.

Sidhu Moose Wala joined the Congress Party in December 2021. In 2022, he ran as a candidate in the Punjab assembly elections but lost to the Aam Aadmi Party’s Dr. Vijay Singhla by a large margin. He was also actively involved in the Farmers’ Protests, essentially standing at the forefront of the protests in his district.

A day before his death, Chief Minister of Punjab Bhagwant Mann’s government ordered that 424 so-called VIPs should have their government-backed security withdrawn or curtailed. The list of VIPs was made public by an alleged leak and included Sidhu Moose Wala’s name. According to the alleged leak, these orders were supposed to be temporary and were motivated by a need to allocate resources elsewhere. The fact that Sidhu Moose Wala’s death happened so soon after his government-backed security was withdrawn has raised questions and fueled misinformation.

Investigations into the killing have just begun, but there has already been coordinated activity from Pakistan-based accounts about the death.

While investigations into the killing have just begun, there has already been coordinated activity from Pakistan-based accounts about the death. These accounts are appropriating the death of the singer to further tensions within India. They are doing this by spreading unsubstantiated claims and theories about the circumstances of his death.

After Moose Wala's death, various accounts started using the hashtags #SidhuMooseWala, #SidhuMooseWalaDeath, and #RAWKilledSidhuMooseWala. Of these, the #SidhuMooseWala hashtag garnered the most engagement — 389k mentions on Twitter, 9629 posts on Facebook — with news organizations using it in the coverage of the story. Most of the engagement under this hashtag was general chatter around the death posted by accounts from all over the world.

Some of these hashtags were being used in conjunction with other hashtags such as #SikhGenocideContinues. This hashtag refers to Operation Blue Star, a military operation carried out by the Indian government between 1 and 8 June 1984 and the Anti-Sikh pogroms of 1984. Operation Blue Star aimed to remove Khalistani separatist leader Jarnail Singh Bhindranwale from the Golden Temple in Amritsar. On 6 June 1984, Bhindranwale was killed during the Operation. 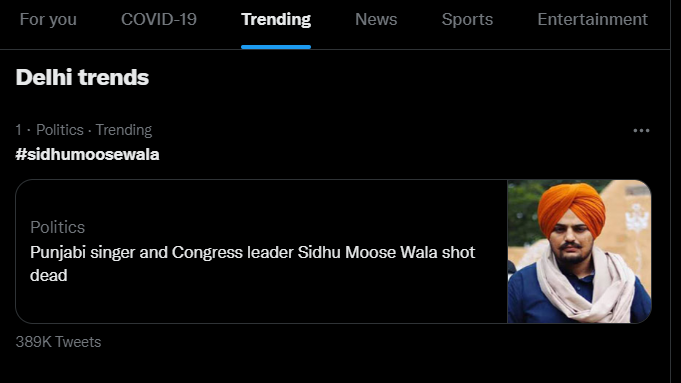 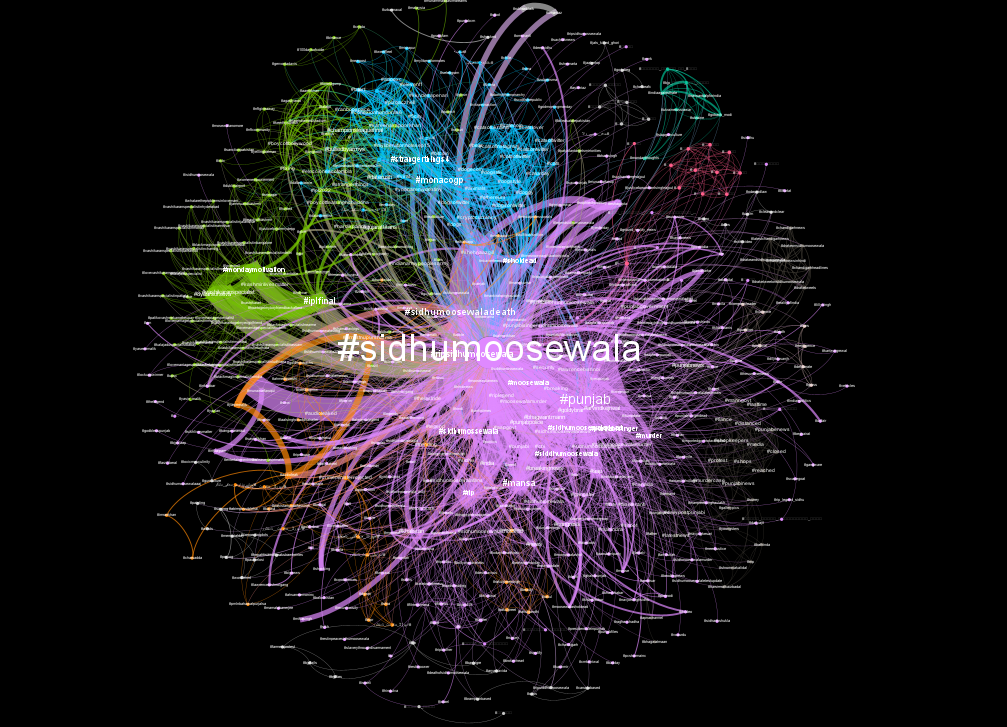 A network analysis based on a data set of over 1900 accounts found a network of accounts displaying the hallmarks of coordinated Pakistani influence operations. – including slogans and images noted in previous disinformation campaigns. The accounts resemble many of the pro-Pakistani networks previously taken down by Twitter and Facebook.

Some accounts claimed that the Research and Analysis Wing (RAW), India’s foreign intelligence agency, was somehow involved in the shooting, that Sidhu Moose Wala was shot dead because of Hindu extremism, or that he was shot for supporting the Khalistan movement. This includes the handles of journalist Raja Faisal and TV actor Sehar Shinwari, both of whose accounts are verified.

Most of these accounts compare the shooting of Sidhu Moose Wala with the death of actor and activist Deep Sidhu, who died in a road accident earlier this year. At the time similar narratives alleging premeditation arose, as he was a vocal critic of the 2020 Indian farm laws.

The sentiment has been echoed by other accounts on Twitter too.

Separately, an account that claims to belong to a nonprofit organization based in the U.S., Central Human Rights Forum (@RightsCentral), called the Indian government fascist. The account was created in May 2022. As of writing, the Central Human Rights Forum only has 29 followers. Its first tweet was on May 29, 2022. In an apparent attempt to show authenticity, the account has retweeted content from April and March 2022.

Logically has previously identified how accounts claim to be human rights organizations to spread disinformation at regional levels. 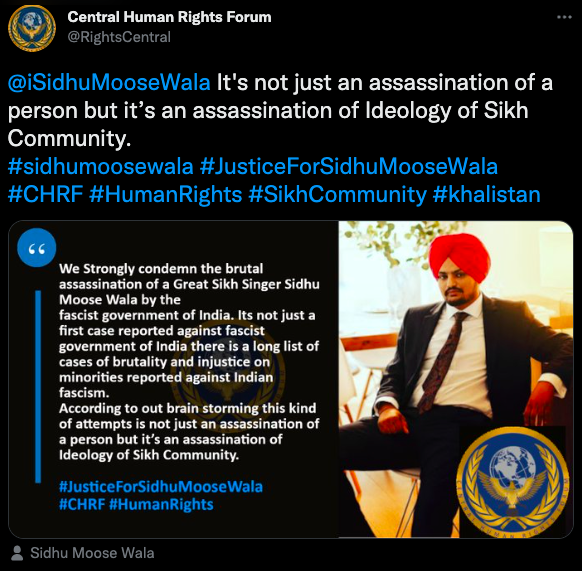 Other narratives have alluded to the rise of “Hindu extremism,” claiming that Muslim and Sikh minorities are not safe in India. By appropriating incidents from Indian domestic news cycles, Pakistani accounts amplify fears about Hindu extremism to bolster separatist narratives.

Proponents of pro-Khalistani narratives have been quick to exploit the murder. A Twitter account by the name of Defend Pakistan (@def_pak14) claimed that he was killed by an “RSS Death Squad.” RSS is short for Rashtriya Swayamsevak Sangh. It is an Indian right-wing, Hindu nationalist, volunteer organization.

Other accounts alleged that the death was in response to Moose Wala’s support for the Farmers’ Protests and call on Sikhs to form Khalistan to avoid persecution. The journalist Raja Faisal also claimed that the singer was outspoken against Prime Minister Narendra Modi and Hindutva ideology. There is no evidence that he has made any direct remarks against Modi or Hindutva ideology, though he did extend his support to the farmers who were protesting against the central government’s controversial farm laws.

What’s more, the above tweet from Bilal Ahmad has since been shared by nine different Twitter accounts with only slight modifications in the 24 hours after the singer’s death.

Sidhu Moose Wala’s death comes a few days before the anniversary of Operation Blue Star, during which the Indian army killed the former Khalistani movement leader, Jarnail Singh Bhindranwale. Moose Wala’s support for Bhindranwale makes it likely he will be portrayed by propagandists as a martyr for the Khalistani cause. While speculation about a famous person’s death is nothing new, in the case of Sidhu Moose Wala, the claims that the Indian government was involved from foreign social media accounts is both of note and of concern. Pakistan-based accounts appear to have amplified online conspiracy narratives in this instance.

The investigation into the singer’s death is ongoing. As of writing, six people have been detained in connection with the murder and the Punjab police have arrested one person.

In an exclusive investigation, Logically has found that Farhatullah Ghauri, a terrorist recruiter and financier for Jaesh-e-Mohammed (JeM), a Pakistan-backed terror group, is using a network of accounts on Facebook, Telegram, and YouTube to amplify...